Tigers Get Burnt by Sun Devils

The series marked the first meeting ever between the two hockey teams. 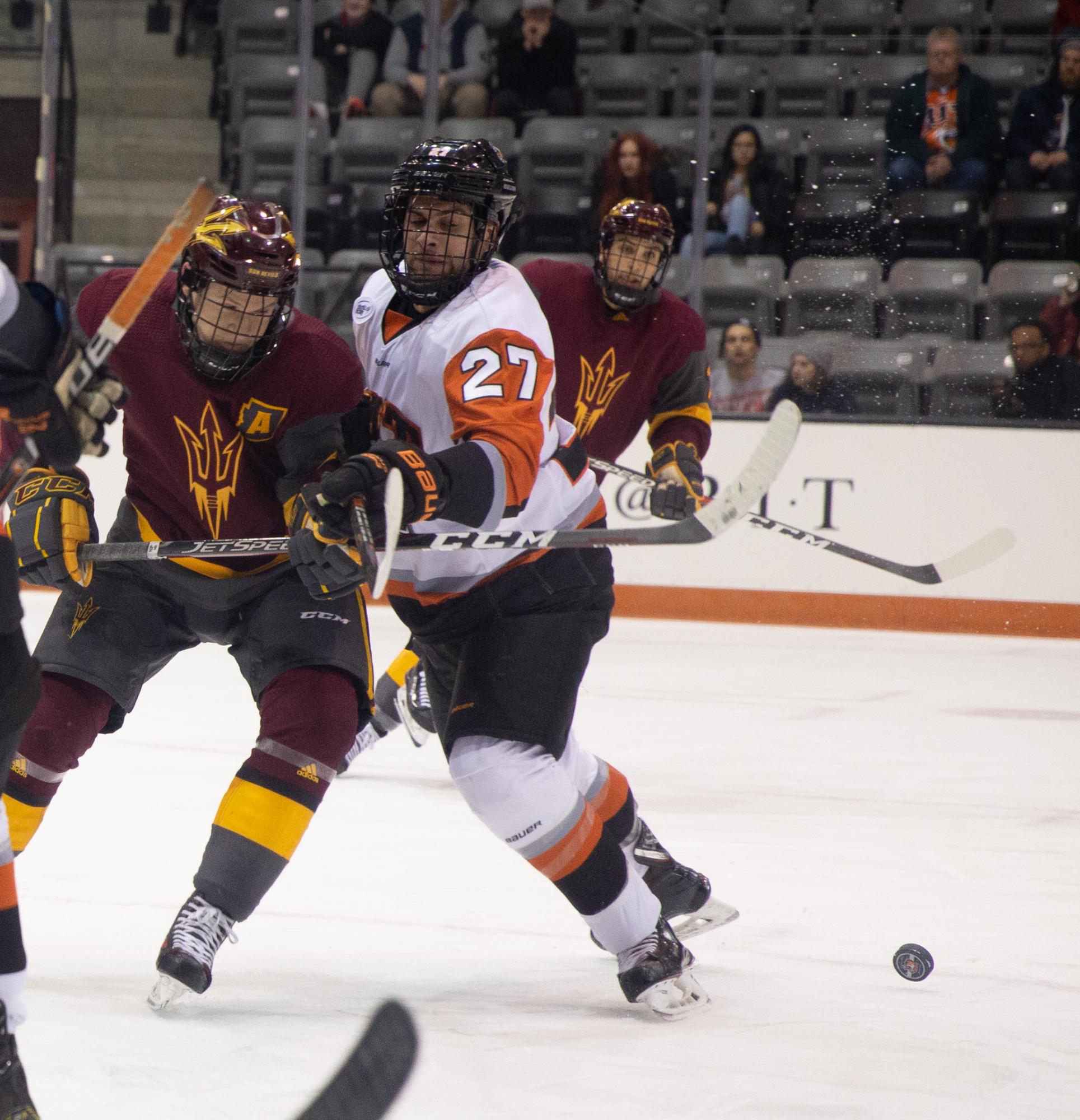 RIT forward, Andrew Petrucci (27), battles for the puck during the RIT vs. Arizona State University game at Gene Polisseni Center in Henrietta, N.Y. on Feb. 1, 2019.

The Sun Devils were rated #16 in the nation heading into the series against our men’s hockey team. The Tigers had played ranked opponents prior to this series, but this was the first ranked opponent to play at the Gene Polisseni Center in the 2018–19 season.

“We know they are a good team. I think the biggest thing for us is to keep the momentum going. We gotta just keep playing the way we have been playing,” he said.

Second year Marketing/Management Information Systems major and goalie for the Tigers, Ian Andriano, made an impact in last week’s series against Army. He saved 65 out of 69 (.942) shots between the two games. He explained how he can stay at that level if he starts for his team again.

“That weekend [against Army] was huge for my confidence,” he explained. “A lot of credit has to go to my team because they played well defensively. I need to stay focus and build off each start, while also improving throughout the week in practice.”

Tough from the Start

Friday’s contest between the two teams did not go as planned for the Tigers. According to RIT Athletics, the first period started out with the Sun Devils scoring in 26 seconds. Dylan Holman of Arizona State tipped in the puck with his stick, while also quieting the RIT crowd quickly.

Making matters worse for our men’s hockey team, Brett Gruber of the Sun Devils scored by shooting the puck above Andriano’s glove. The score was 2-0 in the Devils' favor after the first period.

RIT had high hopes for the following period, but they didn’t work out.

Six minutes into the second period, Tyler Busch scored on a two-on-one opportunity, giving the Sun Devils a commanding 3-0 lead.

Later in the second period, third year Accounting major and forward for the Tigers, Ryan Kruper scored the lone goal for our team. His goal cut the lead, with 3-1 for Arizona State.

The Tigers then attempted to rally on a powerplay chance, but allowed the Sun Devils to score a short-handed goal as Holman scored yet again, this time from the left side of the ice.

The second period ended with Arizona State still ahead, 4-1.

Any chance RIT had in the third period was killed quickly by the sharpshooting of the Sun Devils.

Early in the third period, Brinson Pasichnuk shot the puck in between Andriano’s legs, increasing the Arizona State lead to 5-1.

Pasichnuk then scored again in the last three minutes of the game, giving the Sun Devils the win, 6-1.

Saturday’s match started off physical, but not with any scoring.

According to RIT Athletics, it wasn’t until the halfway point in the first period when Johnny Walker of the Sun Devils scored the first goal of the game. He was able to maneuver around second year Business Management major and goalie for the Tigers, Logan Drackett.

The Tigers answered back with 43 seconds left in the first period. Third year Finance major and defenseman, Darren Brady, scored a goal on a breakaway. He tied the game at one.

The second period involved fast back-and-forth action throughout most of the period, but Demetrios Koumontzis of Arizona State changed that. His goal slowed down the game, and gave the Sun Devils a 2-1 lead.

Later in the second period, second year Supply Chain Management major and forward for RIT, Bryson Traptow, was rammed into the boards and shaken up on the play with an upper-body injury. He later returned to the game.

The third period was exciting for Tiger fans, as Hamacher had an opportunity to score on a penalty shot. He cashed in and tied the game, 2-2.

After that, Arizona State took the remainder of the game by storm, scoring two goals.

Gvido Jansons had a slapshot that whizzed past Drackett. A few minutes passed and Drackett was pulled to get on an extra attacker for RIT. Pasichnuk took advantage of the opportunity and scored an empty net goal, capping off the sweep for the Sun Devils.

Back to AHA Action

In the next two weeks, our men’s hockey team will face conference foes yet again, as well as go on the road for both matches.

The Tigers will finish off the 2018–19 regular season by playing only conference opponents.