Heading into the series against the Colonials, it was evident that RIT was getting help from its freshman players.

First year Business Management major and forward, Andrew Petrucci, scored a goal in last weekend’s series against Sacred Heart. He spoke about how he can continue to be an asset to the team for the rest of the season and beyond.

“I think I had a little bit of a slow start to the season, but I have been becoming more comfortable,” Petrucci said. “A big part of that [comfortability] is the two linemates I have been playing with. They complement my game and will help me become a huge asset moving forward.”

First year Business Exploration major and forward, Will Calverley, has shown huge improvement and continues to get better every series. He talked about how he and his linemates can come up big against Robert Morris.

“My line needs to do a good job getting on the forecheck and getting pucks deep [placing the puck near the opponents’ net]. We also have to bring a lot of energy and generate some offense,” he explained.

In Friday’s contest, both teams got a penalty within the first two minutes of the first period. The 4-on-4 play that proceeded showed that the game was going to be a hard-fought battle from both sides.

According to RIT Athletics, our men’s hockey team struck first. Third year Finance major and defenseman for the Tigers, Brody Valette, scored on a slapshot that got past Colonials’ goalie, Francis Marotte.

A few minutes later in the first period, Robert Morris answered and tied the game at one. Mike Louria scored a powerplay goal to boost his team.

The second period started with second year Business Management major and goalie for RIT, Logan Drackett, making some key saves to keep the game level. His saves gave the Tigers confidence, and in turn, pushed them to control the period.

Fourth year Biomedical Engineering major and forward for the Tigers, Erik Brown, tipped the puck in the net on a powerplay. The Tigers led, 2-1.

Late in the second period, first year Business Management major and forward for RIT, Kobe Walker, added to the tally. He wrapped the puck around the net and found the open side, giving RIT a 3-1 lead at the end of the period.

The first half of the third period was all the Colonials, as they scored twice to even-up the hockey game. Justin Addamo shot a fast wrist shot past Drackett. Then not too long after, Alex Tonge scored a powerplay goal.

Our men’s hockey team did not back down though, as they finished the game strong. Brown scored a second goal, once again on a powerplay, to give RIT a 4-3 lead.

In response, Robert Morris pulled their goalie and brought on an extra attacker, but fourth year Packaging Science major and forward for RIT, Abbott Girduckis, got loose and scored on the empty net. His goal sealed the victory for the Tigers, as they won by a score of 5-3.

Saturday’s match started off rough for the Tigers, as they allowed a goal in the first 14 seconds of the game.

According to RIT Athletics, Aidan Spellacy scored on a two-on-one opportunity to stun the Tigers and take the lead, 1-0.

To make matters worse for our men’s hockey team, Addamo found the puck on a rebound and got it past Drackett, giving the Colonials a 2-0 lead at the end of the first period.

The second period involved no goals, but RIT had numerous powerplay opportunities to find the back of the net. They were unable to do so and had to go into the third period still down by two.

The third period was all RIT, as they controlled the flow and momentum of the period. In the first six minutes Walker was able to snap the shutout and get our team on the board. He got the puck and found an open side, tucking it past Marotte and scoring.

Towards the end of the third period, RIT got a chance to go on a powerplay, and they capitalized. Brown, who had a hot hand in the first game, once again scored a critical goal to give the Tigers some life. His powerplay goal tied the game at two and ultimately sent the game into an overtime period.

During the overtime period, it was back-and-forth. Both teams had a few opportunities to cash in on the game-winner, but no one was able to be the hero. The game ended in a tie, 2-2.

The Tigers had 37 shots, while the Colonials had only 24 shots. In terms of powerplay, RIT had six chances and scored on one of them. Robert Morris only had two powerplay chances and could not score on either. In the Tiger net, Drackett saved 22 of 24 (.917) shots and Marotte stopped 35 of 37 (.946) for the Colonials. 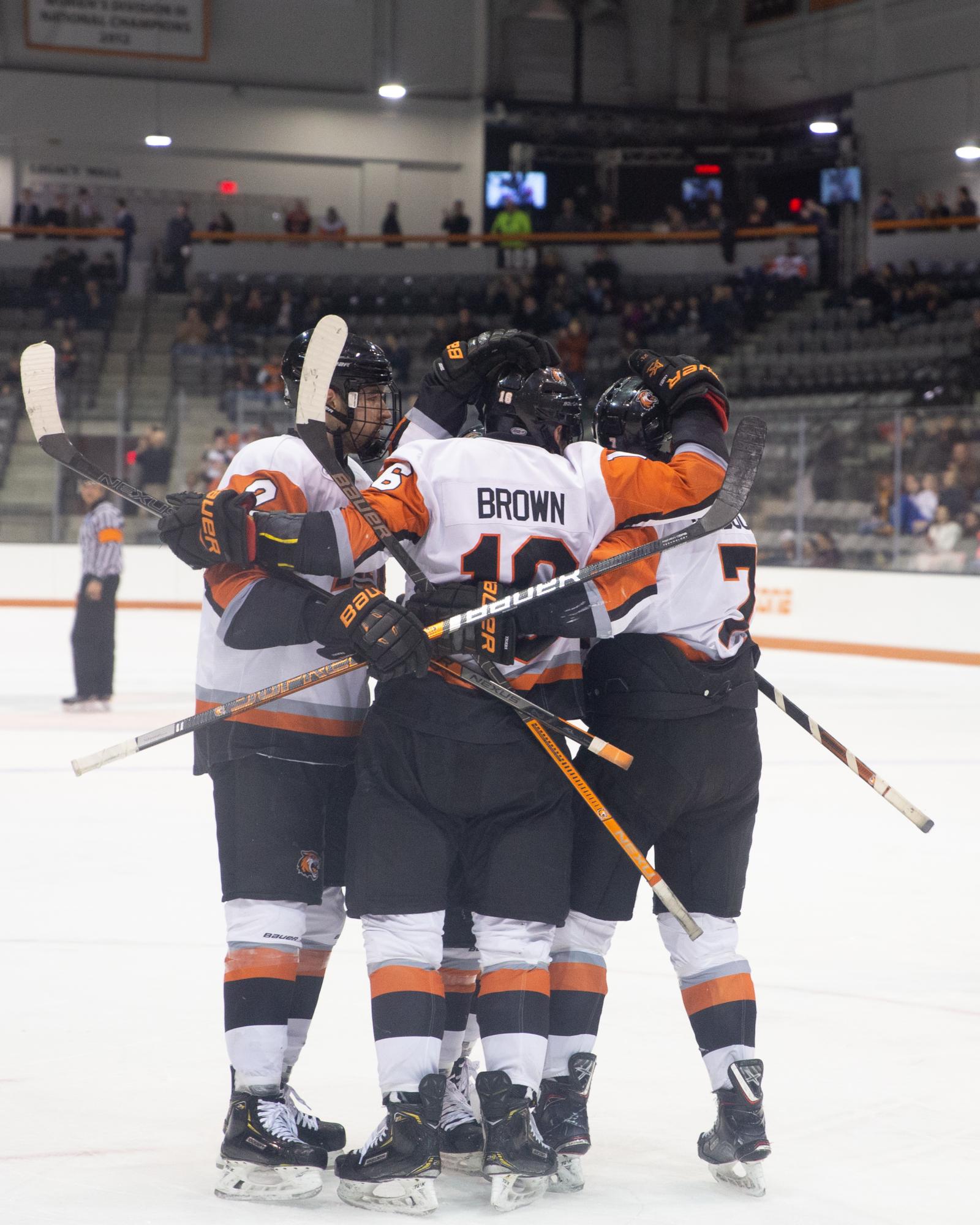 Our men’s hockey team will only play two more times in the 2018–19 season.

The final game for the Tigers will be held on Mar. 2, 2019 against the Canisius College Golden Griffins (10-18-4, 7-16-3 AHA). That game will be Senior Night and will be held at the Gene Polisseni Center.