Jacob Lyman, a second year industrial design major, tries one of the advanced courses at the Red Barn in Henrietta N.Y., on March 26, 2019. Lyman has been climbing seriously for three years and recreationally for five years. Photo by Tony Wen
A student at Aerial Arts of Rochester attempts a "Push Bar Out" on the Hoop during the practice session on Saturday, March 30th, 2019, in Rochester, N.Y. Photo by Tony Wen
The Hearthstone Team in RIT Esports Club discusses one of the latest decks built by Coach Freddy "Frevan" Stock before the start of the open tournament in Orange Hall, Henrietta, N.Y. on March 29, 2019. Photo by Tony Wen

Sports are a great way to get into shape, expend some pent-up energy, satisfy your competitive desires and have fun all the while. But there’s more to sports than hockey and basketball. As barriers are broken and boundaries are pushed, newer activities have arisen that largely question what we would consider sports. Although the popularity of these non-traditional sports has surged, the debate about whether the activity is or is not considered a sport continues. 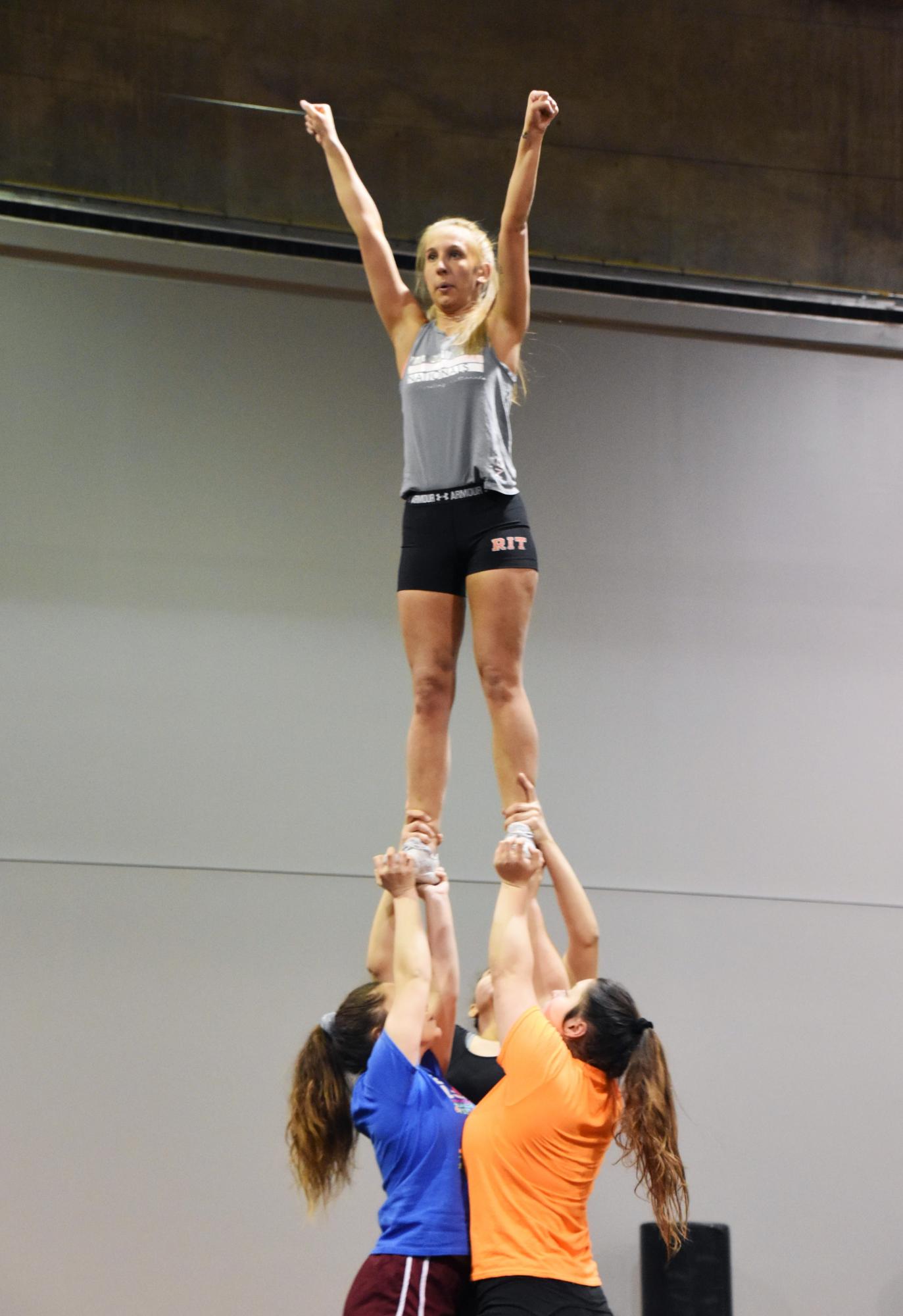 A debate many are likely familiar with would be the validity of cheerleading as a sport. While much more widely accepted, there still are detractors. Gabrielle Derosier, fourth year Criminal Justice and Psychology double major, doesn’t quite understand that view.

Serving as the co-captain for the RIT cheer team, Derosier has been involved in cheerleading since coming to RIT.

She explained that people have misconceptions about cheerleading and what it entails. Some believe it to be “super easy,” with cheerleaders just “walk[ing] around in skirts and [waving] pompoms.” While its origins may be in cheering for other athletes, the sport has evolved to consist of much more.

“You learn a routine that’s two minutes and thirty seconds long. It encompasses dance, gymnastics [and] acrobatics,” Derosier said. “And just so much is in that routine.”

Derosier believes a sport is anything that involves the exertion of energy — physical and mental — while conforming to a set list of rules. Typically, she said, sports also encompass a competitive aspect with a scoring system and winner; however, the bottom line is training and having fun.

“I’m training fifteen hours a week just to be good at what I do,” Derosier said.

"I’m training fifteen hours a week just to be good at what I do."

With their effort, the grace and precision of their movements and the complexity of their skills and routines, cheerleaders are just as dedicated to their sport as any other athlete.

RIT’s Red Barn is a popular location for students to try out rock climbing —  and, even to those who have since expanded their experiences, it still holds a special place in the hearts of many rock-climbing Tigers. Alex Celin, fourth year Biomedical Engineering major, is one such student.

Serving as the vice president of communications for RIT's Rock Climbing Club, Celin has experience rock climbing across the country. She noted that the Red Barn is still her favorite place around the area to climb. Even so, Celin gave nothing but positive reviews for Rochester's other rock climbing facilities, such as RocVentures Climbing Gym and the newly-opened Central Rock Gym.

Rock climbing is much more than scaling a wall, though.

“It’s just this fun ... sport where you can go and solve a problem while also working out,” Celin explained. “And it’s not all just absolute brute strength; there’s a lot of technicality and you have to be very aware of your body and you also have to be very mobile and flexible.”

While there are many dynamic and strength-based movements, rock climbing also focuses on the formulation and execution of a plan. To ensure their body moves in a precise manner, climbers need to maintain balance and grip.

Containing a similar mix of strength and dexterity required for both cheerleading and rock climbing, aerial arts is a demanding activity that represents the intersection of performance art and extreme sport.

“It’s an environment where you work with your abilities and there’s not that pressure to surpass them,” she said. “If someone is trying to get in shape ... I actually think [aerial arts] can be a good fit.”

Because instructors are very safety conscious, they refrain from pushing anyone beyond their capabilities. This leads to a safe and positive fitness environment.

“It’s an environment where you work with your abilities and there’s not that pressure to surpass them.”

While there is only one aerial gym in the Rochester area — Aerial Arts of Rochester — the gym is well-resourced and offers a wide array of opportunities to get involved. They offer traditional silks, hoops and stationary trapezes. The facility also hosts more unconventional apparatuses, such as aerial chains and ropes, which are growing in popularity.

“[My favorite performance was] at the Comedy at the Carlson,” Farrar said. “I performed to Right Said Fred’s ‘I’m too Sexy for my Shirt’ and ... I was on the aerial hoop. It appeared that I was taking my shirt off to match with the song, but underneath I had a bathing suit ... that was designed with a hairy man’s chest.”

She laughed and said, “I enjoyed that way too much.”

As with aerial arts, esports represents an intersection of its own, lying between digital outputs and physical reactions. Esports has experienced a rapid rate of growth on campus since its introduction, as its popularity skyrocketed. Fourth year Computer Science major Evan Hirsh founded and currently serves as president of RIT Esports.

Hirsh explained that the organization started just under three years ago and is one of the fastest-growing clubs on campus, receiving 300-400 new signups per year. Unlike most clubs, however, esports operates in much the same way as the athletics department at RIT.

Just as the athletics department is the overarching administrative body overseeing all of RIT’s sports teams, RIT Esports oversees teams for seventeen different games, with more always welcome. Unlike the athletics department, however, esports remains far more flexible in its lineup, adapting to the ebb and flow of game popularity and encompassing newly-released games as they grab the attention of the college gaming community.

When it comes to the inclusion of esports in the sports community, however, the debate is still heavy.

While he acknowledged that both require mental and physical endurance, the manner of this endurance is too dramatically different to consider them to be within the same category. Even so, esports players' dedication to the game is admirable and in many cases can go beyond that of a number of traditional athletes.

Fitness takes on many forms, and "sports" has a wide range of definitions. The passion behind each athlete, though, remains a steady constant across all activities.