That is, until now. Wegmans has joined Instacart, an online service that will deliver groceries right to your home. Founded by former Amazon employee Apoorva Mehta, Instacart partners with various regional grocery stores at a given location, and then sends out hired personal shoppers to buy and deliver groceries to their clients' doorsteps. In Rochester alone, Instacart has already paired with a variety of companies, from PriceRite to Costco — and now Wegmans.

The End of Grocery Stores?

With retail stores currently struggling to compete with online competitors, it’s hard not to wonder if Instacart — or another service like it — will eventually gobble up the food industry. However, management professor Dr. Clyde Hull doubts that grocery stores will suddenly disappear in the near future.

“They may evolve,” Hull said. “But the people who run Wegmans are very smart. I’m sure that if they see floor space that isn’t being utilized, they will find other uses for it. they’ll find other things that people like to touch before they buy them. Maybe they’ll grow their pharmacy.”

“I can see it going two ways," said Colton. "The product mix within the stores might change — maybe it’ll become more of a local distribution center over time. We might also see the emergence of smaller, boutique-like places, where they just sell a very tailored product selection and experience.”

As for how the onset of such services might impact the packaging industry, Packaging professor Georgis Koutsimanis believes the effect will not be immediately drastic.

“Yes, there will be changes,” said Koutsimanis. “But it will depend upon how much of the industry is being covered by delivery services sales. Is it just three or five percent? Or is it 90 percent? Obviously the higher effect of online sales, the higher this will have on the change of packaging systems.”

According to a study conducted by research firm Earnest, Koutsimanis’s first estimation was right on the mark. Grocery sales from traditional brick-and-mortar stores still make up the vast majority of food sales at 90 percent. Online delivery services, on the other hand, only make up for smidgen of the market at three percent. Not only are shoppers more likely to purchase from brick and mortar stores, but they also have the tendency to spend significantly more when shopping on location — $21 more, in fact.

do have the power to reach various demographics that often struggle to attain groceries.

“There’s lots of benefits for consumers,” said marketing professor Dr. Sorim Chung. “They save money and time, they can save money for gas and it’s convenient for people [who] can’t drive because they are elderly or people who have some disabilities.”

“Thinking back to when I was an undergraduate, would I have been willing to pay a little bit more to not have to deal with the hassle of going to the grocery store? Absolutely yes, without a second thought.”

College students may also be attracted to the convenience and novelty of online grocery shopping.

“Thinking back to when I was an undergraduate, would I have been willing to pay a little bit more to not have to deal with the hassle of going to the grocery store? Absolutely yes, without a second thought,” said Hull. “I didn’t have a car, so... even the price markup wouldn’t have been a big deal for me, because where I was getting my stuff was a convenient store I could walk to. Everything there had a big price markup.”

After speaking with these various RIT experts, I decided it was time I tried out this service for myself. For strictly research purposes, one Saturday I lounged in bed and ordered:

An odd list perhaps, but the goal was to determine how the service would respond to delivering a variety of products — perishable and nonperishable, refrigerated and non-refrigerated. After I completed my list, it was time to schedule my delivery hour. While Instacart does offer high-speed, one-hour delivery services from 9 a.m. to 10 p.m., I was doing my shopping after hours (what can I say, I'm your average college night owl). So I settled on a time slot of 10 a.m. to 11 a.m. the following day instead. I was then directed to the checkout page, where I was delighted to find that shipping was free for my first purchase.

I woke up the next day to a text saying that my groceries were being collected and to expect them close to 10 a.m. At 10:03 a.m. on the dot, I received a knock at the door from a brusque delivery person and was handed my groceries. Everything I ordered was there; the refrigerated items were perfectly chilled and the peas looked fresh and green. Overall, I couldn’t have been happier with my first purchase via Instacart. 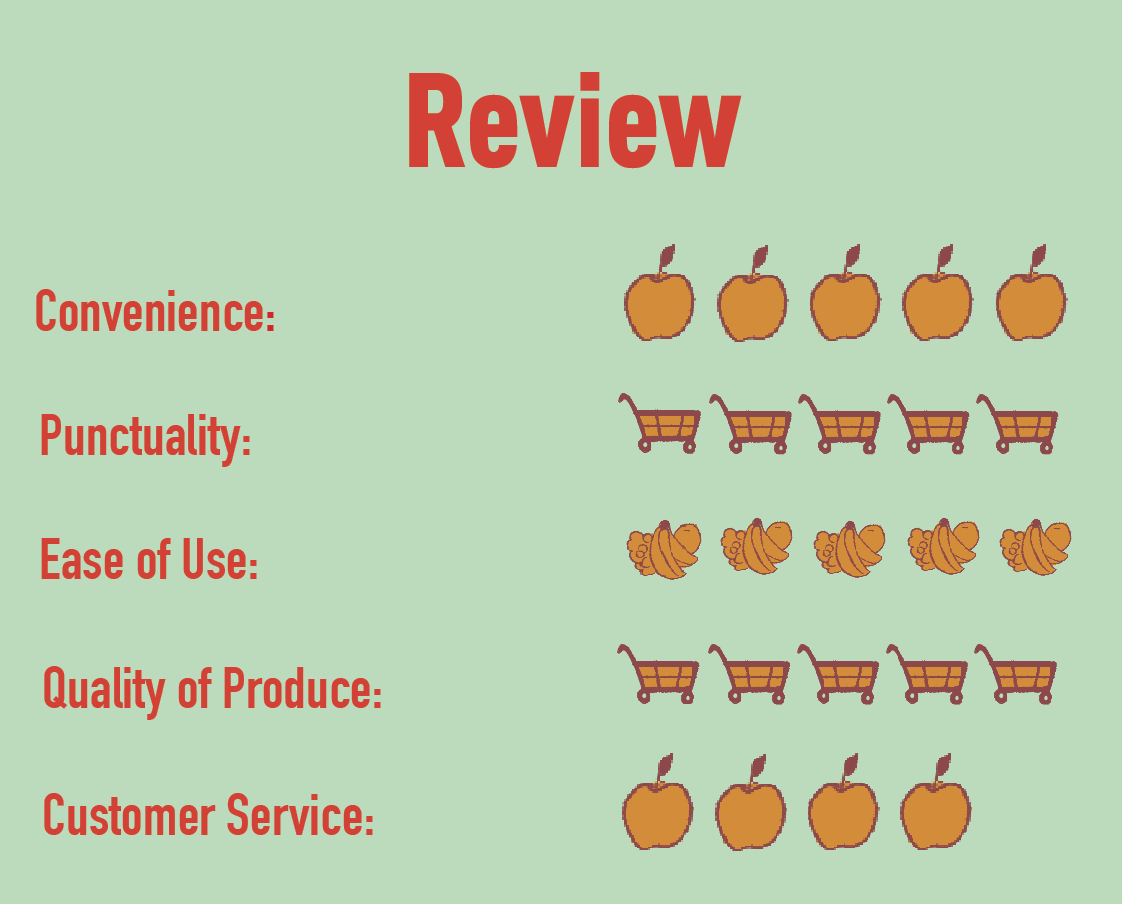