Thought At Work 2017: Community and Conversations on Design

"What design is" and "what its purpose in the future will be" are questions always on the minds of those behind Thought At Work. Accordingly, the sixth iteration of the annual student-run design conference aimed to connect aspiring designers with notable professionals to discuss such topics. From Oct. 20 to 22, students — particularly those within the College of Imaging Arts and Science (CIAS) community — networked and learned from speakers and fellow attendees, including visitors from abroad and other universities alike.

Thought At Work is an event organized by students for students. It offers attendees a look into interactive design subjects that would otherwise not fit into their courses' curriculums. Events ranged from lectures about GIFs and wearable technology to a fast-paced sketch-off.

“[Thought At Work] is a great time and we absolutely love doing it,” said Frank Barletta, a third year Industrial Design student. Barletta was the budget organizer and merchandise team leader for this year’s conference.

“We dedicate so much of our time to this every year,” he noted. According to him, planning for Thought At Work is a year-round process — one that only allots a two-week reprieve from the end of the conference to planning for the next year’s.

“It is really cool to see everyone on the team grow.”

“Our group ranges from 40 to 60 people. We get 60 volunteers for the weekend of and closer to 40 that are year-round,” Barletta said. “It is really cool to see everyone on the team grow.”

Workshops: the Bulk of Thought At Work

Many of the conference’s workshops were conceived to help students better stand out in their various design industries. Attendees of Thought At Work could find discussions about upcoming trends and technical aspects of the tools they use in their fields. The three day event aimed to provide students with a variety of opportunities to advance their understanding of several facets of design.

One of the workshops that stood out most was "Make Your Better Future." Hosted by Mark Capper — president of Kompas Strategy — and Xerox, this event was promoted with the bold tagline “the best way to predict the future is to create it.” This workshop challenged students to explore unique trends in the workplace by quickly developing conceptual business models. Students worked in teams to envision a future where Xerox offered new communication techniques set forth by the student teams.

“Make Your Better Future” interestingly lead into the subsequent event, the “Sticky Note Vote!” There students were shown the conceptual work of the teams in the previous workshop. After consideration, the students voted on which idea they thought would be best for Xerox to pursue in the future.

Two other workshops (“Animated GIFs: Creation, Optimization & Alternatives” and “GIF or GIF: Create your Own”) focused around the iconic means of digital communication. With minimal conversation around its proper pronunciation, speaker Miguel Cardona — a professor within RIT’s CIAS and a key member in the creation of imgix.com and Dumbwaiter Design — explained the more technical aspects of the format.

The workshops covered the reasons behind the creation of the file type and  why it is apparently near obsolete in today’s internet. Cardona’s previous work at imgix.com hosted video content for sites, making his talk about the use of GIF versus MP4 formats and compression highly informational. Cardona also demonstrated many ways to create looping videos and the unique style they can bring forward.

Even Java Wally’s held their own workshop centered around logo-design. Titled “Caffeinate Your Creativity,” students were tasked with redesigning the iconic Java’s logo. The designs were required to represent the culture the coffee shop brought forward. Winners were selected by that day’s keynote speaker and announced at the closing ceremony. 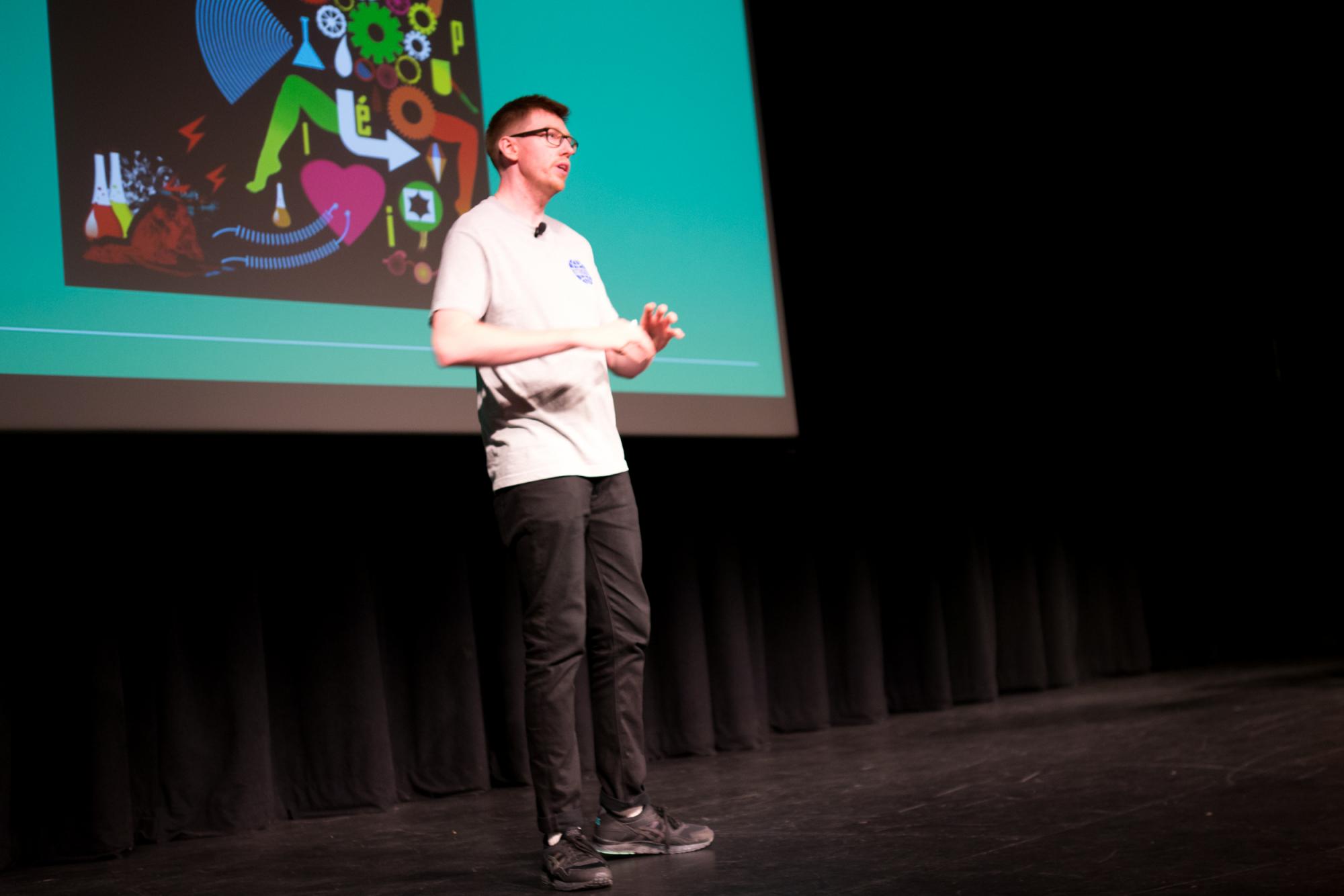 Gordon Reid, the thoroughly enthusiastic founder of Middle Boop was this year’s keynote speaker for Saturday. His keynote titled “Blag, Borrow, and Steal Your Career” focused on his achievements going from a college student to artistic director of Visa’s Rio Olympic advertising campaign.

Middle Boop (middleboop.com), Reid explained, was started by himself right out of college, initially as a music blog. His portfolio would grow to include works done for Nike, Maker Studios and the aforementioned Visa Olympic campaign.

Reporter got a chance to sit down with Reid after Thought At Work to speak more about his professional experiences as a designer and feelings on the conference — and by extension the design community.

“It has been a long old trek to get [Middle Boop] to where I am, a sustainable small agency,” said Reid. “I have had a number of inspirations from all sorts of people. One big moment was when I met this guy called Matt Moore. He is the founder of MWM Graphics. He had this amazing vector-based artwork.”

Reid recalled seeing Moore traveling with his artwork in a professional capacity and wanting to chase the same aspirations. He had been doing artwork for some musicians and magazines, but very much wanted to take his design work to a level like Moore’s.

“All of my friends at the time were kind of suburban friends all getting office jobs,” he remembered. “It was interesting because they would all look down on the fact that I was in this shop [doing artwork for musicians and magazines]. They couldn’t see past the fact that in the evenings I was doing this cool shit.”

“The dream was to travel with my artwork which I believed to be possible if this guy, Matt Moore, could do that,” added Reid. Following someone like Moore, who was a success within the design industry, definitely was a large motivation to him.

Reid also expressed a great interest in not just design, but the community as a whole it can bring together. “I didn’t join the design community to come off and do these lectures,” he indicated. “But a couple got offered to me and I leant into it till I realized that I really like doing it.”

When asked about what he knew about Thought At Work before coming, Reid admitted he knew very little. “I did FITC [Future of Innovation, Technology and Creativity] as my first big conference for me to talk at, that was at the beginning of the year,” Reid recalled. “I had spoken a lot before, but not at that scale. I caught the bug! [So] I was asking around to speakers who did conferences in America.” Eventually Reid, through his network, was in contact with the organizers of Thought At Work.

“There aren't many places in the world that will have a student run conference that is anything like this.”

Reid expressed amazement at how Thought At Work was run. “Getting students to run something like this is very, very special,” he postured. “There aren't many places in the world that will have a student run conference that is anything like this.”

To Reid, conferences like Thought At Work embody the importance of learning what’s happening in all the different fields of design; even if you don’t think of yourself as a part of the industry.

“You could be a journalist or a designer today but you might be something else tomorrow,” he concluded. Reid believes, as others expressed at the conference, that it is important to lean into how interdisciplinary and wide-ranging design really is. For similar reasons, that is why Thought At Work always strives to have a selection of speakers and workshops reflect this too — to better immerse attendees in all of design's possible purposes.