Brain-computer interfaces (BCIs), where an individual controls computers and other devices using only their mind, is a rapidly-expanding field with a wide range of potential applications. BCI devices are especially desirable as assistive technologies for those with impaired motor or communicative capabilities. Now, these exciting technologies are finding a place in the research labs at RIT.

A Brief History of Brain-Computer Interface

One of the earliest studies on BCI was conducted in the 1970s. By 2000, several methods had been developed. These methods involved either the noninvasive use of an electroencephalogram on the scalp, or the surgical implantation of electrodes in the brain. The original BCI technologies were designed to enable severely disabled patients with little to no motor control to communicate and interact with their environment, which still remains the primary goal of these new technologies today.

Since the early 2000s there has been an explosion of interest in BCIs with researchers and entrepreneurs, with Elon Musk being among them. People are seeking to use them to augment human capabilities and improve the lives of people with disabilities. RIT, as a tech school, has also been dabbling in this technology. 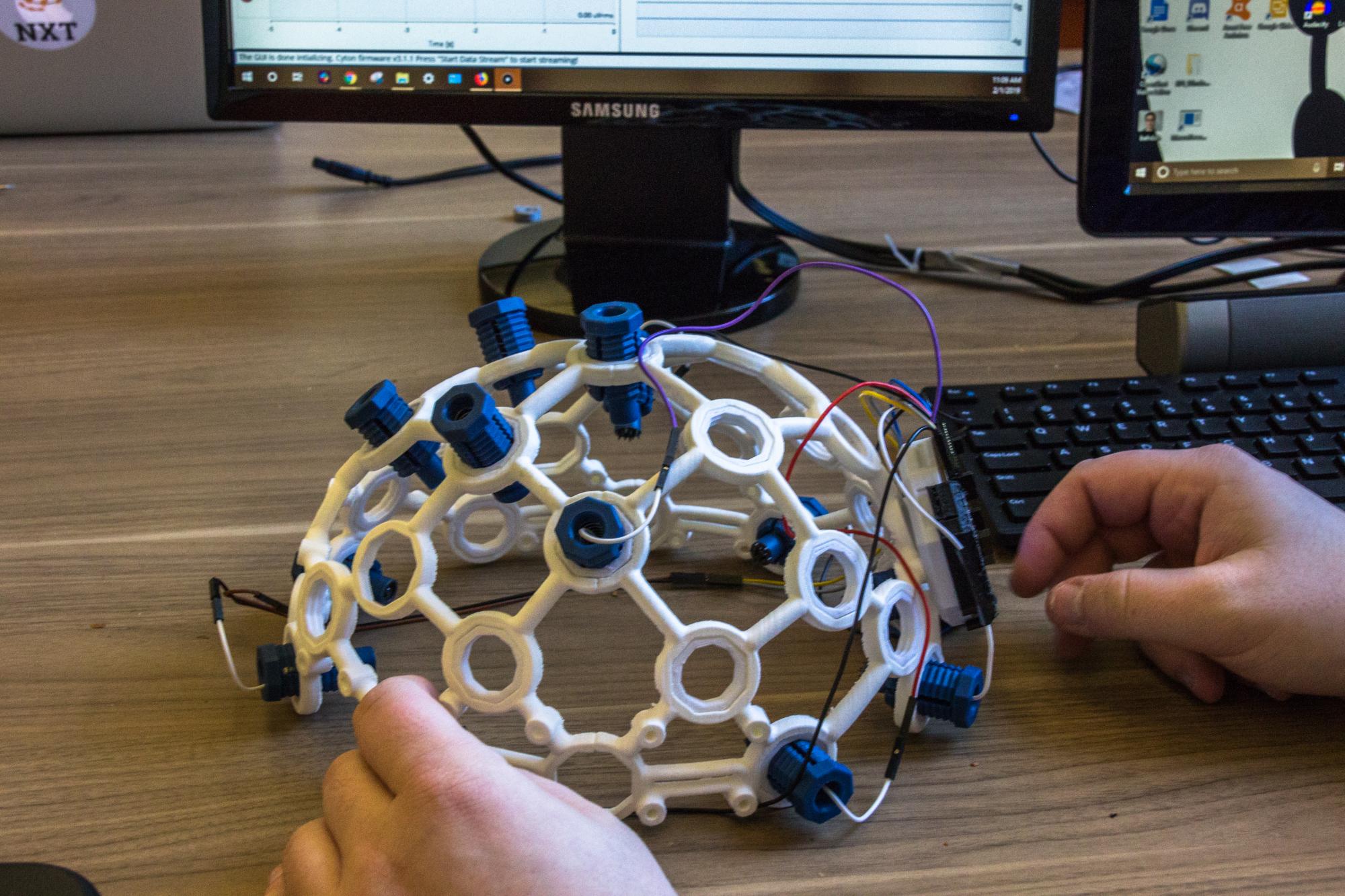 A team of student researchers at RIT, the NeuroTechnology Exploration Team, are working to create new assistive technology devices, specifically controlled by the user’s brain and muscle tone. This project is entirely student-run, with students in charge of designing and building each of the devices, as well as fundraising. The leader of this project is Harrison Canning, a third year student in the School of Individualized Studies. His co-executive and chief technologist is Colin Fausnaught, a fifth year Software Engineering major. Besides them, the project has 20 regular members and 35 who participate on a part-time basis.

Students involved in the NeuroTechnology Exploration Team are attempting to produce BCIs with a wide range of functions and uses. Canning first became interested in BCIs after a traumatic brain injury in seventh grade temporarily inhibited his basic motor abilities, such as speaking and writing. Now he hopes to make assistive technologies using BCIs as widespread and affordable as possible. These technologies overcome the central problem faced by the mobility-impaired.

“[W]e have those signals [directing muscles to move] being produced in the brain. The issue for a lot of people with mobility impairment is that it can’t get through the spinal cord and can’t actually access those muscles,” said Canning.

Everything the team uses in their projects is sourced and produced as cheaply as possible. The technologies used are also noninvasive, relying either on electroencephalograms attached to the scalp or on localized muscle contractions, to convey signals to the computers and devices. The software they use is open-source and can be downloaded to any computer. 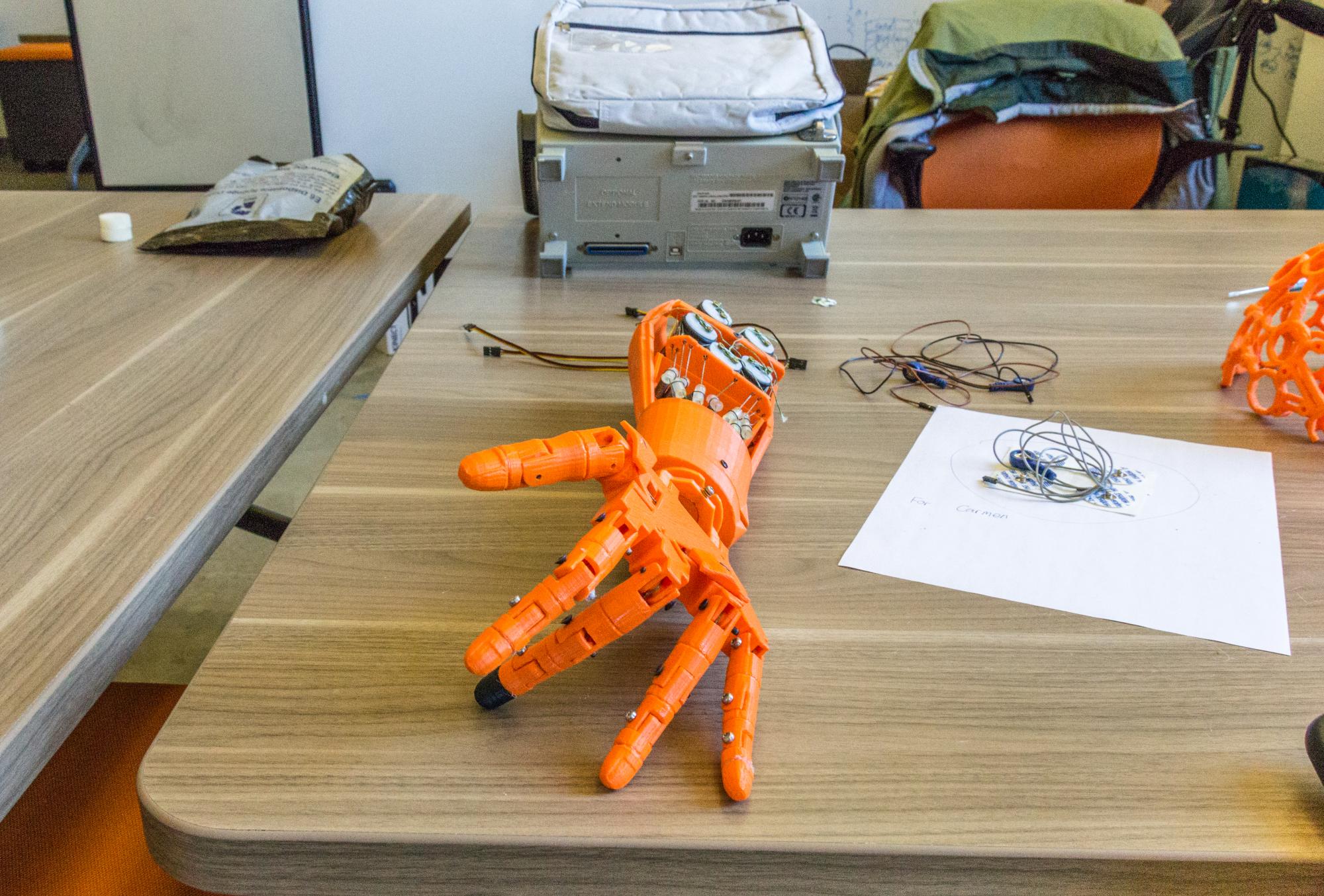 An early stage prosthetic arm built by the members of NeuroTechnology Exploration Team in Henrietta, N.Y. on Feb. 1, 2019. Photo by Natalie Whitton

Current projects the lab members are working on include electrodes that can be embedded directly into clothing and game controllers operated by muscle contractions. There's also projects featuring movable 3D-printed prosthetics controlled by the patient’s nervous system, a Thought Keyboard which can be operated using only the brain and a specialized wheelchair, to name a few.

Students working on the projects come from a wide range of academic backgrounds, creating a diverse team and members.

“The only prerequisites I personally think are necessary is a strong devotion to developing new technology and strong problem-solving skills,” Fausnaught said.

Canning expanded, saying he believed having a large team is an asset.

The Future of the Team

During Spring 2019, the NeuroTechnology Exploration Team plans to start Module II of its overall project.

While the first semester was focused primarily around assembling a team and gathering hardware, this semester the students plan to coalesce into several specialized teams, each with a different project focus. Each team will have its own leaders, researchers and part-time participants. Said teams will also have their own advisors, who will generally be RIT faculty and staff with special knowledge of the subject. An example of one of their future projects, is that students plan to acquire an eye-tracking device which will enable them to decode eye movements, as well as build their own hardware.

Canning also said he hoped to bring in more specialized students, including those in the life sciences, onto the future team as well.

“We think that for at least our first year it’s gonna be more important to just get hardware that works, and then bring in specialists that can accelerate us to the next level of being phenomenal, as opposed to just functional,” he said.

Canning added that he was eager to recruit more students in general, such as those in the biology and biotechnology fields.

The Future of BCI

Although the projects already being planned by the NeuroTechnology Exploration Team are very exciting, BCIs have a long way to go before they enter the mainstream. Outside of RIT’s labs, many new technologies are currently in development. However, Fausnaught admitted that the discipline is still in its infancy.

"I like to compare where BCI is now to where computers were in the 60s and 70s," he said.

Canning himself is interested in the potential of transcranial magnetic stimulation, a therapy in which a magnetic field is passed through a person’s scalp in order to stimulate the brain. This therapy has shown some promise as a treatment for certain kinds of autism.

Canning and Fausnaught also hope that someday brain-computer interfacing will be used on all sorts of computer programs or devices, including site-building software and computer games, in order to make them more intuitive to use. This is also one of the goals of the NeuroTechnology Exploration Project: to move brain-computer interfacing beyond the medical field and incorporate it into a wide range of different situations.

All in all, the NeuroTechnology Exploration Team has been developing a lot of interesting projects to promote and advance BCI technology. With projects such as a Thought Keyboard, a specialized wheelchair, and advanced prosthetics under their belt, they show a commitment to advancing the field of BCI, and making it affordable. Who knows what the students on the team will come up with next?