RIT Cheerleading: Coming Into the Spotlight

Rachel Beckham (center) and the RIT cheerleading team leave the competetion at the Empire Cheer Winter Classic at the Rochester Institute of Technology in Rochester, N.Y. on Feb. 13, 2016. Photograph by Joseph Ressler.

There is a team of talented RIT athletes who pour hundreds of hours into perfecting their sport. They can accomplish feats with the type of dazzling ease that only comes after years of experience. As you watch them tumble across the floor, fly through the air and dive from astonishing heights, it is impossible not to feel your breath catch in your throat. The only problem? Very few people are aware that this special team even exists.

"Whenever we are at an event, the first thing we get is 'Oh, I didn't even know we had a cheerleading team,'" said second year Advertising and Public Relations major and flyer Grace Koester.

Fourth year Industrial Systems Engineer and flyer Missy Miller echoed the sentiment: "When I first came to RIT, I was actually told that we didn't even have a cheerleading team. It wasn't until I saw them at the activities fair that I found out."

Coach Katie Post, an RIT alum currently in her first year as head coach, nodded her head in agreement as she listened to these observations. "This is a huge problem we've had to face. I hear these comments constantly. Even in the athletic field I get, 'Aren't you just on the sidelines?' when there is actually this whole world of competitive cheerleading that no one knows about," she said.

Make no mistake, these skillful athletes are experts at what they do. To watch them perform is unlike any other athletic event on campus. Their routines are jammed full of awe-inspiring moments. To hear that the team is getting very little exposure not only feels like robbery, but it also begs the question: why?

"I think a lot of that is left over from when I was a student here," said Post. "When I was on the team, we weren't very good and we just did sideline cheerleading. But now, I really want to take the team to a competitive level." And so far, her plan seems to be working.

Upon observing a practice under Post's guidance, two things become predominantly clear: how comfortable the players are with her and how dedicated they are during a routine. In between one run through and the next, there is an aura of joviality as the players joke around and ask questions. But as soon as the routine begins, the athletes assume a laser-like focus that can only be described as professional.

“One thing I wish people knew is how committed we are. We practice for two and a half hours, staying here until 10:30 at night,” said Miller. “Not only that, but people should also know how dangerous cheerleading can be. We average about 6 to 10 concussions a year.” 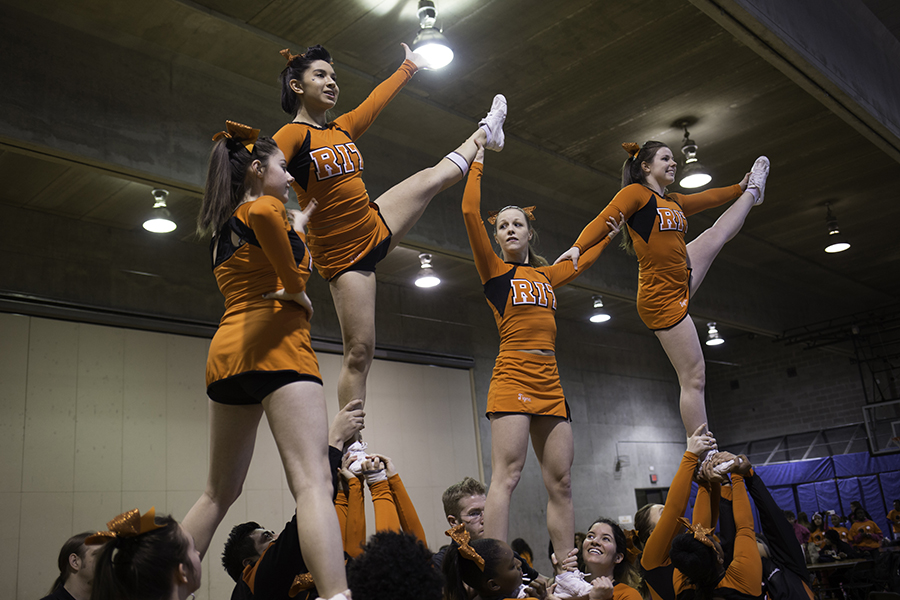 The majority of those head injuries are due to inadequate mats that fail to cushion accidental falls. Nevertheless, the flyers, or cheerleaders who are thrown in the air, show incredible bravery, never flinching as they fall back 20 feet into the waiting arms of the base tumblers in the most elaborate trust exercise ever witnessed.

Like a lot of RIT teams, the members have formed remarkable bonds with each other. “My absolute favorite thing about cheerleading is watching people who have never cheered before develop and blossom," said fifth year student in the School of Individualized Study and base tumbler Dara Moore. "Because when I first cheered, there were a lot of people who had a lot more experience and there was a ton of encouragement for me to grow.”

Indeed, that is exactly the type of environment Post endeavors to foster. “I enjoy making the bonds with the athletes and pushing them to do things they haven’t done yet, to work towards a bigger goal. I strive to make their cheerleading career — if it stops here at RIT — the best it possibly could be,” she said.

When you talk to Post’s players, they cannot stop gushing about her direction. “She has so much cheerleading experience and she cares about us a lot,” said Koester. “She brings that experience to us and now we’re much more at the college level.”

The team is also looking to increase its numbers in the next couple years. “Any ex-cheerleaders, dancers, gymnasts we can mold,” said Post. “We’re a co-ed team, so we’re always looking for guys to join us as well.” Tryouts are usually around the first week of school, and everyone is welcome to give it a shot.

Clearly this is a time of astronomical growth for RIT cheerleading, but the struggle to gain recognition is still very much ongoing. Luckily, the team is made up of some very resourceful athletes. "We're trying to go to more events — not only athletic ones, but we just started our own philanthropy. We're going to as many events in the Rochester community and on campus as possible,” said Koester.

Post has also been working intensely with the athletic department to provide more opportunities for her team. “I have spent this year especially working on exposure,” she said. “Aside from the philanthropy, we’re currently setting a cheer camp for younger kids. Athletics has also finally helped fund some more swag for us, so the girls have their backpacks and they’re wearing their bows to class. Fun stuff like that.”

When it comes to competition, Post has lined up several events in the next couple of months that will really push the team to achieve that higher level. In the interim between now and then, the cheerleading team has been performing at basketball games in order to prepare. As they complete their crowd-pleasing routine triumphantly in front of a packed audience, it is clear that this team refuses to be ignored any longer. 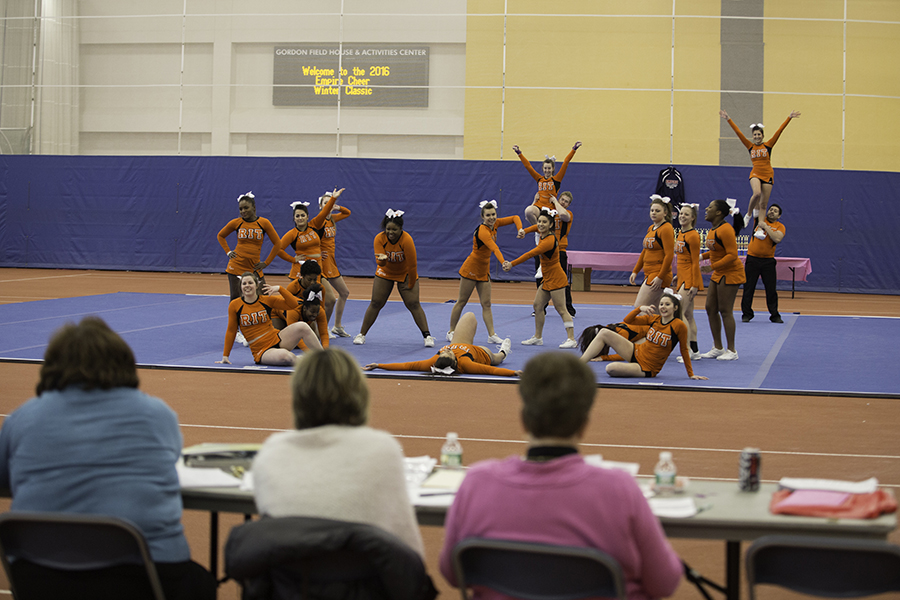