Why is RIT Mentally Straining?

Estaeban Polands, a 3rd year Computer Science Major, reviews the concepts of parallel and distributed systems in Golisano at RIT in Henerietta, N.Y. on Dec. 12th, 2018. When asked about the workload at RIT, Estaeban says that it depends more on how well him knows about how the course works than how well he knows the material. Photo by Tony Wen
Mickey White (right), a 3rd year Film and Animation major, shares his stories with his friend Jax Ohashi (left), a 4th year Industrial Design major, at Wallace Library in Henrietta, N.Y. on Dec. 12, 2018. The Wallace Library had many "destress" events throughout finals week. Photo by Tony Wen

It’s late and the open labs close in less than an hour, but you have a project due at midnight. When you get home, you have a choice: either get a full night’s rest or work on the next project early into the morning hours to stay on track.

This is the reality that many students at RIT face — a lifestyle forced upon those who seek to strive and excel at this high-paced technical institute. From Game Design to Engineering, and Animation to ASL Interpreting Education, RIT creates an environment where students can succeed, but not without a cost.

RIT’s “sink or sail” culture doesn’t impact many students until their second year. This was the case for Emma Maze, a second year 2D Animation student.

“Second year was a lot tougher. There were a lot more expectations with projects and stuff like that, and there was a lot more pressure to excel,” she said.

When asked how RIT was doing with providing mental health services to compensate for the workload, both students laughed.

“I’m hoping it will get better,” Maze said.

But providing vital services to students is no laughing matter.

The overarching opinion from students seems to be that RIT doesn’t provide enough mental health services. Complaints range from long wait times to simply not enough staff. Yet this isn’t the only factor.

“RIT has this culture of innovation, change and creativity. That culture trickles down to the students,” Devor said. “If you put that much pressure onto your students, yes you’ll see a lot of people succeed and do great things ... But at what cost to the individuals who didn’t come in here expecting that?”

“RIT is not very understanding of some of the pressures of non-traditional students,” Allen said.

Allen has seen no hints of support for non-traditional students, and such services are vital to a student's mental health. Many students, traditional or otherwise, are forced to take on jobs to make ends meet.

“There are a surprising amount of students who work an illegal amount of hours,” Devor said. “They get more money, but at what cost?”

Another stressing issue all students face is workload, a problem that only gets worse as time goes on.

“I think the most stressful part of RIT would be the suddenly-increasing workload at the end of semester,” said Jacob Nemeth, a second year Game Design and Development student.

He mentioned that if class schedules could be better organized, it would greatly benefit students. Furthermore, exams should preferably not be held on the same day.

What has RIT been doing to solve these issues? Many students would say not enough. However, David Reetz, the director of Counseling and Psychological Services, disagrees. 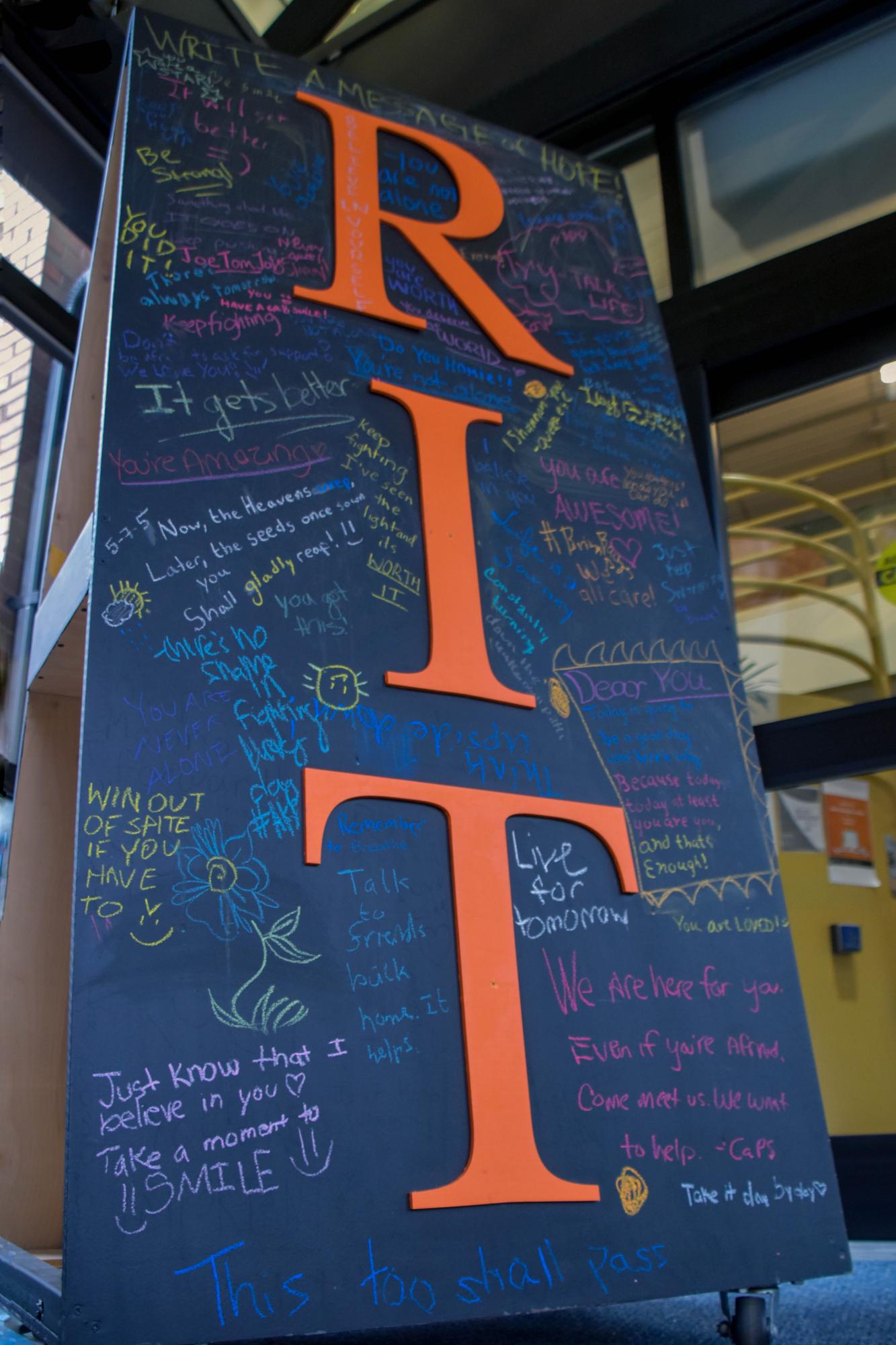 The effect of technology can be seen clearly. Reetz cited less in-person interaction creating social anxiety, making it difficult to connect with professors and peers. Depression often stems from this anxiety, diminishing motivation and the need to perform self-care. A lack of sunlight and an extended winter do nothing to alleviate mental stress.

“The university has been listening to students," Reetz said. "We’ve been talking about these numbers and seeing these trends ... most counseling centers around the country are seeing sharp increases [in student needs]."

RIT and other universities experienced a 30–50 percent increase in student health needs in the past year alone, Reetz communicated. He explained that to accommodate for this, Counseling and Psychological Services has created a 24 percent increase in student access. At the end of the 2015–2016 academic year, two additional staff members were brought on, increasing their capacity to see students. A number of new positions have also opened up, including an Outreach Coordinator to go to students directly.

In addition, Reetz has planned to install five new embedded offices across campus — the first of which will be located in Golisano Hall — to increase ease of access. They will serve as local, personalized walk-in offices providing counseling and psychological services.

Hopefully, these changes can bring about what students so desperately need — a reliable and expedient mental health service.

Devor seemed to hope so. “They already have taken steps about what they intend to do. That’s a good step ... No one is wishing ill will. ”

What is so mentally straining about RIT?

"I started out trying to go with the mentality I had in high school — pay attention in class and do the homework at the last minute. I quickly realized how much of a mistake that was." — Jacob Nemeth, second year Game Design student

“In life, it’s either sink or swim. At RIT, they really teach you how to swim.” — Kira Hansen, second year 2D Animation student quoting an alum

“The extracurriculars contribute to stabilizing mental health, but it's increasingly difficult to have any time for those extracurriculars.” — Justin Allen, third year Accounting and Management Information Systems student

"Paying for school, looking for co-ops [and] jobs [and] all projects/exams always at the same time." — Holly Hastings, fifth year Software Engineering student

What could RIT do to help?

"There needs to be more recognition for praising a student who’s taking time for themselves. We only see media of those students who are really killing it.” — Daniel Devor, fourth year Psychology and ASL Interpreting Education student

"More financial aid, [a] rule to have no exams or projects due on Career Fair week [and a] rule to not allow professors to punish students because the student couldn't attend class because they were at Career Fair." — Holly Hastings, fifth year Software Engineering student

"Let students know they are not alone. Yes, college is a time to 'grow up,' but not all decisions have to be made alone. 90 percent of my first year professors made no effort to help me with tough decisions. They told me, 'You're an adult; make those decisions yourself.'" — Ellie McCullagh, second year NTID and Psychology student