“[This Tiger Talk is] somewhat of a follow up on the task force but also just to kind of do a pulse check of how students are feeling and things that you’re seeing or not seeing, and to continue this idea that this is a community response to what we think about as a culture we want to make here at RIT," said Johnson. "It’s not about how many counselors are in the counseling center or where they’re located because wellbeing is much bigger than the support that you get from the counseling center or the health center. It’s about how we support each other and the physical environment ... ”

The Role of Faculty and Students

The idea of support threaded itself throughout the night’s conversation. Some questions focused on the roles of faculty and staff outside the counseling center. One concern raised was that professors may not know how to address mental health concerns and could use training.

Johnson responded that nearly all the colleges have recently invited the Counseling and Psychological Services (CaPS) team to provide faculty training. She also mentioned that all new RIT faculty have an orientation that includes mandatory training on how to support students. However, it is best to speak with one’s academic adviser when mental wellness is affecting academic performance since they are more equipped than professors to handle such issues.

A related concern was that CaPS may not be communicating all their resources with professors, so they are unaware where to direct students in need of help. 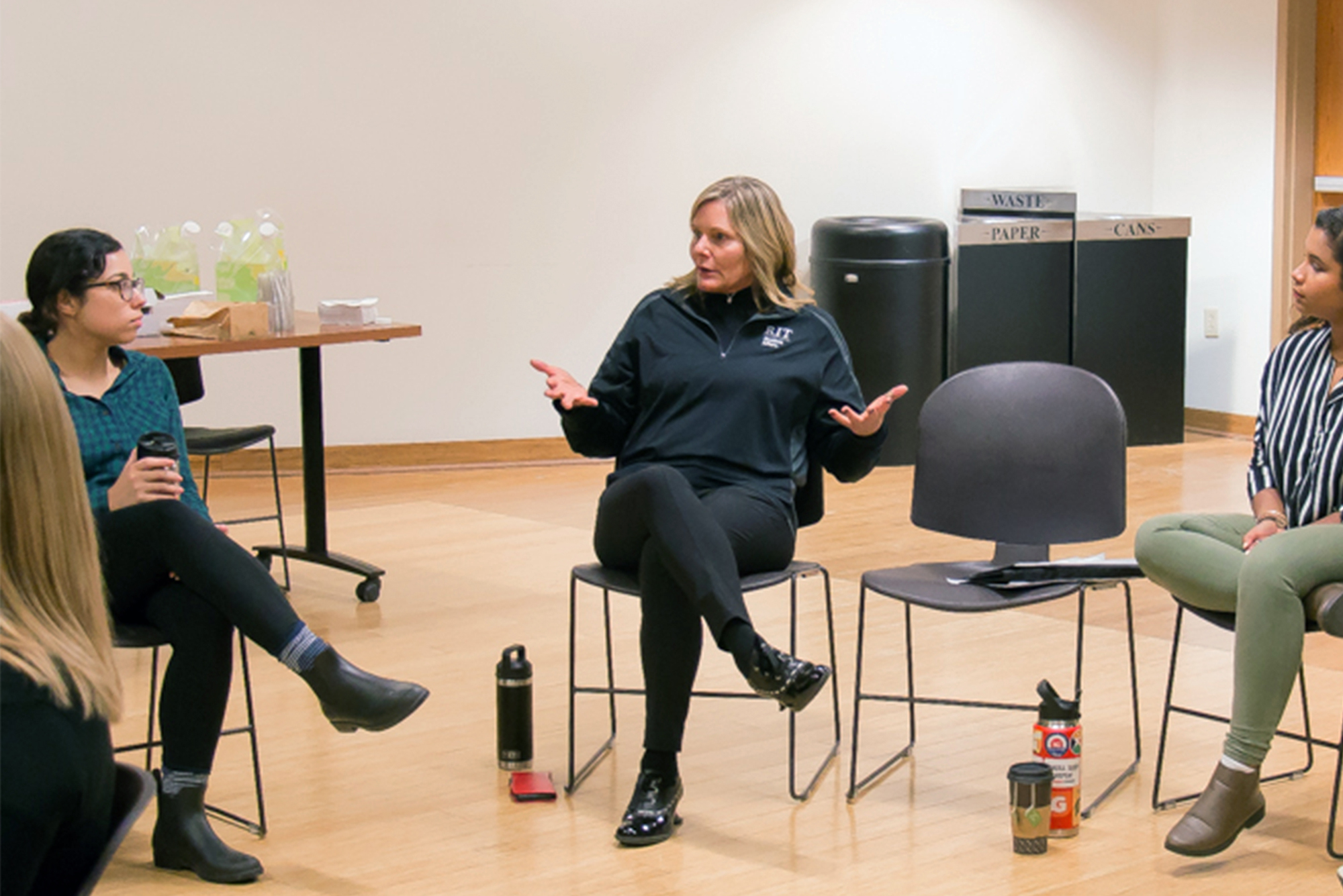 “We want to try things on a small scale to see if it’s working or not and then revise that before we go in a more global approach ... [they’re] looking at [having] a website that has all the resources that faculty could access quickly, some what-if situations. But again, some of those are in development,” Johnson said.

Johnson also mentioned the possibility of implementing an online refresher course for faculty. This could help remind professors of what resources are available to students who may be struggling.

David Reetz, director of CaPS, highlighted that providing professors with the tools to help isn’t enough. It's just as important to create a classroom environment where distressed students feel safe approaching professors for help.

“This is what we’re asking faculty to think about: ‘what would you need to hear from your professors on the first day of class that would allow you to feel more comfortable talking to them or an academic adviser at that first moment when things start to get hard?’,” said Reetz. “That basic question is what we’re really taking some time to explore and think about how we can reshape the learning environment based upon the answer to that question.”

Aftab reminded students that they also play a role in improving mental wellness on campus.

Johnson mentioned that in terms of direct student involvement, resident advisers are great touchpoints for students struggling with mental health. Also, the position of wellness peer educator is a great new opportunity for students to help create positive change in emotional wellness.

Along with clarifying their goals to build a culture of care on campus, Johnson and Reetz tackled some tough questions and criticisms about specific improvements in suicide prevention.

Johnson addressed the common criticism that students aren’t aware of what resources are available or how to access them. She stated that someone has recently been hired to help with marketing and improving communication techniques specifically for the wellness areas.

Reetz responded to a student’s suggestion that it may be better to consider inviting an outside suicide prevention program that has more experience. He mentioned that CAPS is “actively” looking into various programs, including the popular organization Mental Health First Aid.

Another criticism was that the suicide prevention committee, a student committee that organized suicide prevention week during early September 2019, has a limited budget and needs expansion. Aftab pointed out that the 2019 event was more successful than several of its previous years, bringing in huge participation. Johnson mentioned that suicide prevention isn’t just a weeklong event. The administration is trying to plan more strategic ways of discussing wellness, especially with first year students, rather than having a lot of information crammed into one week.

In relation to student concerns regarding CaPS appointments, Reetz spoke.

He said, “I would love to continue to try to get some student input on how to communicate [with them] in terms of this notion that you only have so many visits and then you get booted out. I hear that term ‘booted out’ and that’s a tough one to hear. We don’t embrace that philosophy.”

Johnson added onto this.

“When there are situations where someone needs long term care, then that is where case management helps to support getting them access to a provider outside. We can’t do long term support because we wouldn’t have the capacity to do [that] for the whole student body per se. So, you’re right, there may be times when people will be referred out. Again, it is not ‘Oh! Today is your last day!’ It is actually a process that that individual will go through with their therapist in transitioning them out,” she said.

CaPS was further criticized for not communicating regarding their walk-in appointments since many students, especially first years, have the impression that walk-ins are for emergency situations. Johnson responded to this, noting that although walk-ins are open to students in any sort of distressful situation, they should not be the first point of access because they aren’t a full intake appointment. She offered the idea of doing a focus group with first year students to understand how to approach mental health with them.

One student’s criticism touched on the issue of CaPS not creating enough access specifically for LGBTQ students. Reetz mentioned that clinical staff is positioned in the Q Center for 20 hours a week. He also pointed out that in order to become a licensed therapist, there is extensive training and complex conversations to understand one’s own and others’ identities or backgrounds. This means that any therapist is suitable to work with LGBTQ students.

Finally, Dr. Lindsay Phillips, director of the Student Health Center, responded to a criticism that the annual mental health screenings may be turning away students whose symptoms are less recognizable.

“Screening is screening. So, it’s absolutely true that not everyone that has a particular mental illness is going to answer a screening test with criteria that says that it is likely that they have it. Similarly, they are not diagnostic tests. They are screening tests. So, they help people who would otherwise not be seeking care or perhaps who wouldn’t have identified in themselves a degree of stress that makes them seek care,” said Phillips.

This Tiger Talk allowed for the administration to share their goals and progress while students voiced their concerns. As the administration continues to address mental wellness on campus, this meeting suggests that they are carrying the voices of students with them.