Emmanuel Okafor, Housing and Dining Committee Chair, updated that second-year NTID students that require RIT housing for their scholarship will now have first-year status when choosing on-campus housing. They will now have the first pick at housing.

The SG election results are now available. The SG representatives for next year can be found at this link. Or refer to the image below: 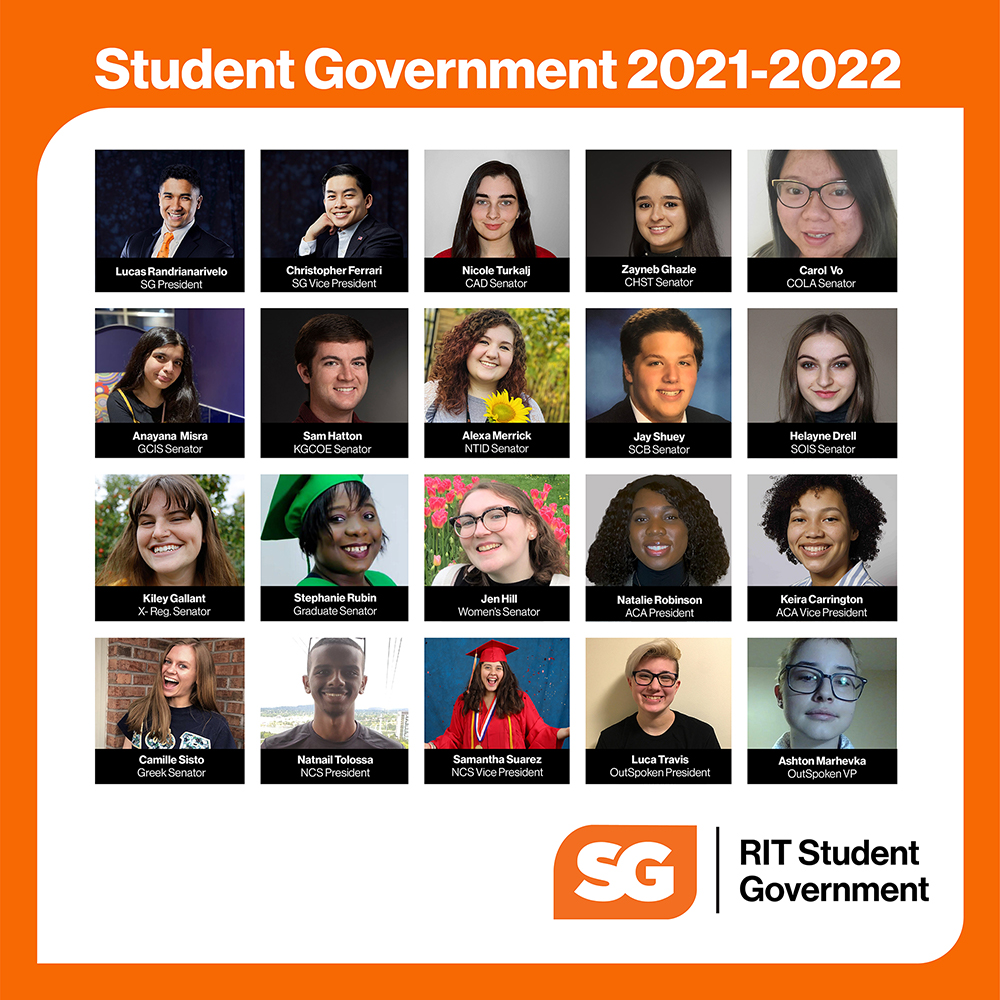 Please Have Events for Seniors This Year

The charge asks that RIT consider having events for the graduating students. The author believes that RIT has the resources and the time to plan COVID-19 friendly events that allow the graduating class to celebrate their achievement. SG charged the charge to the Director of Student Relations.

The charge asks that SG look into what the author calls "very sketchy behavior" from high-ranking SG members. The update to the charge urges supporters of the charge to officially submit evidence to sgelection@rit.edu for review and calls for students to engage more with committees and attend SG weekly meetings at 2:30 p.m. on Fridays at this Zoom link. Lucas Randrianarivelo, the sole SG Presidential candidate, has five allegations of election violations. None of the allegations has resulted in the ineligibility of him to be the SG President for the next school year. SG charged this charge to Shine Deharder, the current SG President.

The charge asks that RIT remove the RIT 365 course as a requirement for graduation. The RIT 365 course is for students in their first semester to get to know RIT within several themes. The course is zero credits but has a emphasis on attendance in order to pass as well as two required events on Saturdays. The charge asks that the Saturday events are too much to require and are sometimes hard to fulfill. The charge also believes that the topics of the course are not adequate for RIT. In response, Year One Programs is in the process of moving the required events to other days and will do so if possible. Year One Programs is also open to changing the course to include more practical topics such as laundry, resumes, LinkedIn and library resources. SG is confident that RIT 365 will be better for students in the future. Year One Programs says that they are incorporating the feedback in the charge into the RIT 365 facilitator training.

This charge asks that RIT publish the amount of revenue they obtain from their policies that remove both dining dollars at the end of the school year and weekly from unused meal exchanges. This charge was from 2018, when unused meal exchanges were removed after the end of the week. In spring 2021, meal exchanges and Gracie's swipes were converted into dining dollars. The charge believes that RIT is greedy when they, what feels like, arbitrarily remove money from students that they have already paid for. In response, RIT Dining says that "unused Dining Dollars represent less than .05 percent of revenue for Dining". RIT Dining stressed that RIT isn't in the business to make money selling food and the revenue dining generates is to self sustain RIT Dining, while having enough revenue to make improvements in infrastructure like Mobile Ordering. SG also wanted to emphasize that one of their long-term projects is to have RIT Dining carry over students' dining dollars throughout enrollment at RIT. As of April 7, 2021, RIT Dining has updated the Terms and Conditions. RIT Dining will now roll over 100 percent of students' unused Dining Dollars from semester to semester until they are either depleted or the student leaves the university.

The charge asks that RIT clarify its policies when it comes to the freedom of speech and its protections. In response, RIT's Office of Legal Affairs weighed in to showcase that based on RIT's University Policy on Freedom of Speech aligns RIT with the current interpretation of the First Amendment of the United States Constitution. However, based on RIT's policies on Discrimination and Harassment, these are unprotected forms of speech as well. Consult the PawPrint or ritlegal@rit.edu for more information on unprotected speech at RIT.​