A committee is currently working to revise RIT’s C11 Policy — the “Policy with Respect to Demonstrations on Campus.” They are currently seeking input from Student Government (SG) and the student body, as well as faculty and staff later in the semester.

All RIT policies are to be reviewed and revised on a five-year basis; however, the C11 Policy has not been significantly revised since its inception in 1975. The first time it was officially stated that this revision process was underway was during an SG Senate meeting on Nov. 17, 2017, during which Bobby Colón, general counsel for RIT Legal Affairs, spoke on the subject of the First Amendment.

The discussion helped to clarify the current policy in place, with Colón mentioning during the talk that RIT was in the beginning stages of reviewing its free speech policies. Since RIT is a private college, it does not necessarily have to abide by the Constitutional consideration of protected speech.

A committee was formed consisting of student, faculty and staff representatives, as well as representation from legal affairs, the division of diversity and inclusion, human resources and public safety to review the free speech policies. The committee met regularly to further their general understanding of the academic and legal ramifications of different review proposals in an effort to formulate the best possible revision for the C11 Policy.

Once the committee had sufficiently discussed revisions, a draft was sent to the governance groups at RIT. This included Staff Council, Academic Senate and SG. The committee seeks endorsement from these groups by the end of the semester.

When presented to SG as the newly-titled “Policy on Freedom of Speech and Expression,” however, there was a general discomfort in voting whether to endorse the proposal, as representatives were genuinely unsure of how their constituents would feel about the policy. Thus, they have delayed their vote until the end of the semester in order to better gauge student opinion.

There are three main areas of the C11 Policy that have raised concern among the student body. These areas are the protection of hate speech, restriction of demonstrations and the encouragement of trigger warnings on syllabi.

A large portion of the research conducted by the revision committee consisted of the comparison of RIT’s policy to those of universities across the nation. Nicole Boulais, associate vice president of Student Affairs and committee member explained the research process a bit further.

“We spread [the policies] out on the table and none of them look alike; but if you start to look at themes, overall, I would say ... there’s a large percentage that [say] a college campus is a place for civil discourse and intellectual thought,” Boulais said.

Going along with this was the idea that hate speech, previously considered protected speech, should remain so. The committee debated long and hard on the subject, with these debates still ongoing; however, it largely came down to a matter of educational value.

“Part of what students should learn at a university is how to explore, examine, and debate in a civil manner and be forced to think about things a little bit, ” said committee member Sue Provenzano, assistant vice president of Academic Affairs.

Others argued that there was no place for hate speech on campus, and that students should be protected from it.

Boulais added to this sentiment, explaining that of the universities the committee looked at, the vast majority had free speech policies in line with the U.S. Constitution. Of those that didn’t, many were either very small colleges with more homogenous populations or they were religious institutions limiting free speech to ensure it did not go against their faith. Very few institutions of similar size and scope to RIT restricted speech further. 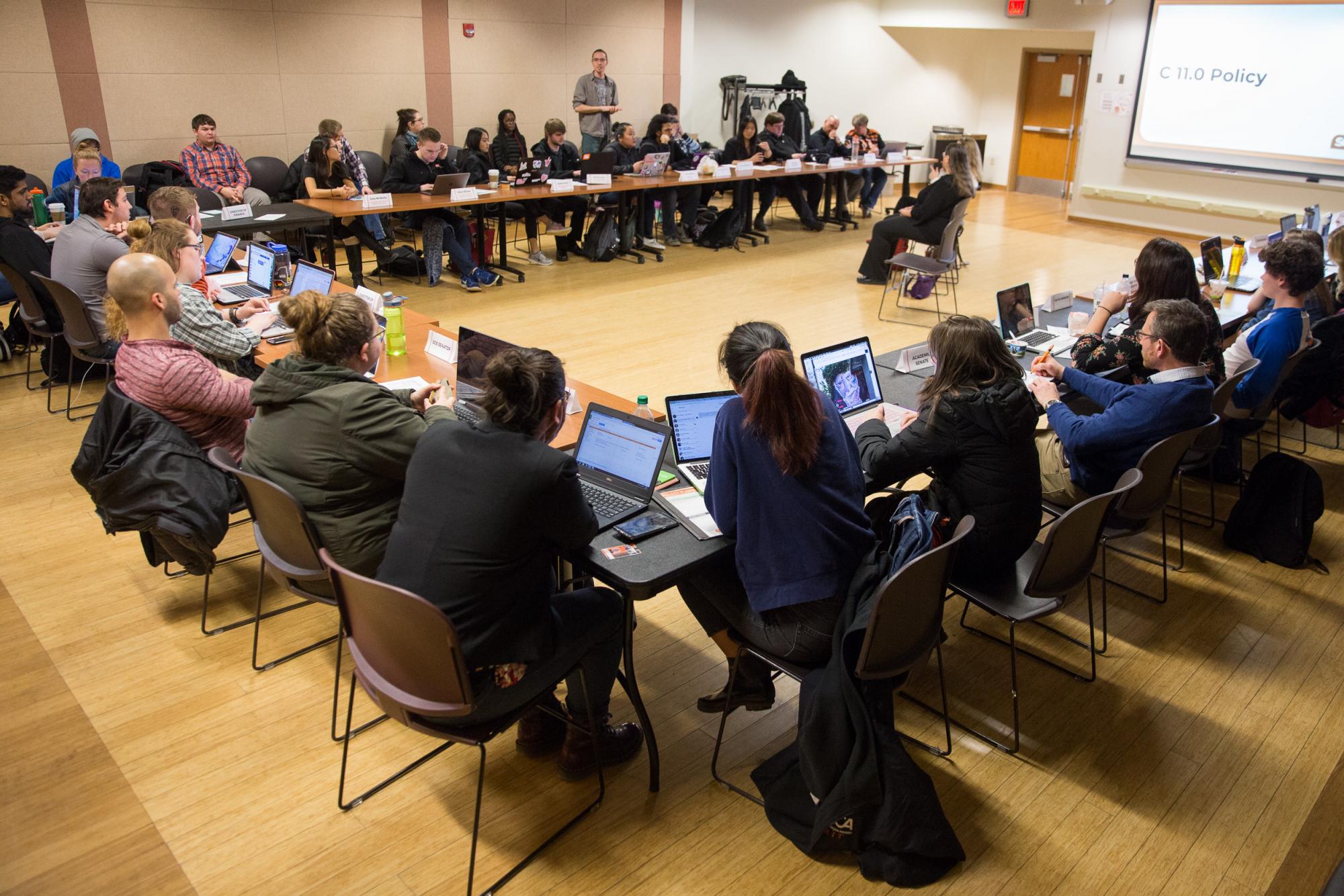 Another area of concern for review was the speaker and the protest and demonstration portions of the policy. This portion remained largely unchanged, thematically; however, the language was updated for easier comprehension. Under this proposal, RIT would continue to not discriminate against speakers on campus based upon the content of their speeches. However, as before, speakers cannot simply invite themselves to campus. Rather, all speakers must be invited by RIT or an RIT-affiliated group, such as a student club or organization. Any speakers who do wish to come on their own accord must request permission through the Office of Government and Community Relations. Additionally, protests and demonstrations cannot be disallowed based upon the content of either the demonstration or the subject of the protest.

However, there are still restrictions in place to limit these speakers and demonstrations to ensure the smooth operation of academics at RIT. These are typically referred to as “time, place and manner restrictions.” So, while a protest couldn’t be prevented based upon the content of the protest, they could be required to occur only in certain areas that will not disrupt academic courses, at a time that wouldn’t disrupt sleep patterns or in a manner that does not infringe upon others’ rights.

Additionally, the C11 Policy outlines a refusal to recognize the “heckler’s veto,” meaning that one cannot use one’s own free speech to infringe upon the rights of another to their own free speech. In practice, this means that, while a group could protest an event, they cannot take it upon themselves to interfere with the event.

The intent advertised by the committee seems to be to ensure that all groups are given equal opportunity to bring in speakers they might be interested in, as well as to guarantee that speakers and protests against any speakers would not disrupt academic life on campus.

Finally, there is much debate around the inclusion of trigger warnings in course syllabi. The current policy in place makes no mention of trigger warnings, but the proposed revision states, “Faculty are not obliged to include Trigger Warnings in their syllabi, or ahead of a class in which potentially offensive material will be introduced; however, RIT does encourage its faculty to use Trigger Warnings where appropriate.”

Some find the inclusion of trigger warnings to be a step too far, believing them to be wholly unnecessary. Others believe that, with such a large and diverse group of students at RIT, it is impossible to accurately gauge what would and would not likely trigger someone. The thought behind the policy is that since it is difficult to ascertain whether a trigger warning is needed in any given situation, they should just be completely optional.

On the other side of the argument are those who believe mere encouragement is not enough. Some advocate for mandatory trigger warnings on all syllabi by all faculty. It may be difficult to determine when a trigger warning is needed, but the idea is that taking the time to figure that out is always better than the alternative of accidentally triggering a student and causing them unnecessary stress and anxiety. However, there is the question of how the administration might enforce such a policy.

The encouragement of trigger warnings is the largest content alteration between the current C11 Policy and its proposed revision.

Despite the sizeable variety of opinion on the current proposal and what the ideal revision would entail, one thing is certain: the current C11 Policy is drastically outdated and in desperate need of an update, especially in the current political and social climate.

The policy committee is still making adjustments to the proposed revision based upon the feedback they have received. SG is also continuing their efforts to ensure students have ready access to the policy and their opinions are heard.

The proposed revision of the C11 Policy can be found here.