No Transgender Hormone Therapy at the Health Center

A handful of previously treated  students had been receiving maintenance hormone therapy at the Student Health Center (SHC). The prescriptions and laboratory tests had been ordered by Dr. Annamaria Kontor, who had attended multiple training sessions and conferences about transgender health care. She is qualified to fill and update hormone prescriptions from the World Professional Association for Transgender Health.

Reporter managed to obtain a copy of Kontor's termination letter, which stated the reason for termination:

"The Student Health Center's practice prohibits prescribing hormone therapy for the purpose of gender transition," the letter reads. It goes on to claim that this policy had been communicated to the health center staff and that Kontor had continued to prescribe treatment despite being aware of this.

An email (which can be read in full at the end of the article) sent to parties inquiring about the situation reads:

When asked if she had ever heard of any policy, procedure or prohibition regarding hormone therapy for gender transition before her firing,

“Never. This prohibition was never published, never announced, I was never told .”  Additionally, there is no documentation about hormone therapy for gender transitioning being discussed with the SHC staff.

Transgender health care is a relatively new field of practice, but many sources say that it falls under primary care in the hands of a trained doctor.

The SHC provides basic primary care to students, according to their website. While the website lists common medical issues that are treated at the health center, there doesn't seem to be clear definitions of what is and is not covered.

"I think if [issues] fall within medical primary care, that’s within the scope of care of the people who are comfortable with that," said Dr. Wendy Gelbard, associate vice president of Wellness.

Kontor began treating transgender students who came to her with a previous diagnosis. She continued maintenance therapy, which involved ordering laboratory tests and adjusting the hormone levels accordingly. The SHC will sometimes provide bridge prescriptions to students who have to wait for an appointment, but will not order blood tests and continuous prescriptions. Kontor was planning to write a policy to address hormone therapy, but had been waiting until the summer when she had more time. She claims that the quality of her care was never questioned.

An employee performance review in April gave Kontor positive results, . Henry Trettenbach is a transgender student who was being treated by Kontor, and has only good things to say about her.

"She was actually being a bit more thorough than my doctor [at home]," he said. "... Dr. Kontor is just an all-around good human being."

Despite the reviews, the SHC claimed that she was not following policy.

“[Hormone therapy for gender transitioning] is felt to be outside of our scope of practice," Galbard said. "People who are working in the health center have not been trained in that ... type of medicine and we can’t do everything here. We’re kind of a general, basic, primary medical care.”

"You should be able to get it through the Health Center because it's not that major of a thing."

RIT's Staff Performance Improvement policy has clear guidelines for dealing with staff that are not performing appropriately. First, the supervisor is expected to give verbal coaching and then a written performance improvement plan. If neither of those actions work, a final written warning can be drawn with Human Resources. Kontor said that she received none of these actions or documents. The policy also states:

"In cases where the nature and severity of the issue and/or a history of past infractions warrants, termination may be immediate."

Galbard sent a memo to Kontor regarding an informal meeting they had. In the memo, she explained why the termination was immediate:

"I determined that the nature and severity of prescribing hormone therapy drugs for transitioning students and the willful disregard for a supervisor's reasonable requests warranted immediate termination."

"I determined that the nature and severity of prescribing hormone therapy drugs for transitioning students and the willful disregard for a supervisor's reasonable requests warranted immediate termination."

Hormones can be used to treat a variety of conditions, some of which are diagnosed and treated at the health center. Hormones can be prescribed for, among other things, birth control, ovarian disease and low testosterone.

“These [hormones] are almost the same prescriptions that we prescribe to other patients, for young men who have a low testosterone levels or for young women who have ovarian disease or vaginal bleeding or for contraception," said Kontor. "And that practice was never questioned.”

The question of whether to provide hormone therapy to transitioning students has been an ongoing discussion at the SHC. On Dec. 21 the RIT Center for Women and Gender hosted a transgender workshop for the SHC; they brought in a specialist from the University of Rochester as well as a psychologist.

“The consensus [to my knowledge and in the literature] was that RIT needs this service," said Kontor. "There is a big need for it, and we should and [were] able to provide this for students.”

A multidisciplinary team was started to address this issue about a year ago, according to Gelbard. The ability of the SHC to handle gender transition must be evaluated, staff would need to be trained and policies would need to be put into place before moving forward.

"If we have enough interest and find that that’s a good enough use of our limited resources then absolutely that would be ideal," said Gelbard. "A lot of it is just balancing what we can do and which group are we going to be able to devote our resources and have the most impact.”

Currently, students can meet with a case manager to discuss their needs and insurance coverage to find a provider in the area. The two providers nearby are Trillium and University of Rochester Medical Center. Whenever a medical issue is deemed outside the scope of practice of the SHC, a student can meet with the case manager to find outside services.

“We do that, not just saying ‘hey, you know, we can’t help you, you have to go off campus’ but we do that with a coordinated approach from providers and our health care staff downstairs and our case manager,” said Gelbard.

The SHC can offer some help in terms of cost and transportation, but those resources are limited. Full-time students are required to pay a healthcare fee which allows them any number of appointments with the SHC without cost. Outside clinics may require a co-pay, depending on an individuals insurance. In addition, it can take months to get an appointment at an outside clinic as a first-time patient.

“I feel so sorry for my friends too, because they're not as lucky as me, because some of them don’t even have a car," said Trettenbach. "So even if they were able to get into Trillium to go off campus to get transgender care ... it’s really difficult for them.”

Kontor said that students usually have to wait up to three months for an appointment at Trillium. The SHC can offer so-called bridge prescriptions, but it is safer to measure hormone levels and then adjust the dose, which Kontor was qualified to do.

The sudden firing of Kontor left the handful of students she was treating in a difficult position. Kontor was able to contact some of her patients to tell them that they had to look elsewhere forC did not reach out personally to let them know that their treatment would be interrupted. The patients she was not able to contact had to hear through the grapevine.

“I had to sort of tell [my friends] the bad news that ‘uh yeah, you can’t get hormone treatment.’ Which is really tragic because one of my friends needed to get their shot next week," Trettenbach said.

Interruption of hormone therapy for gender transitioning can have serious negative effects.

"There are physiological changes and also mental health changes," said Kontor. "The transgender population has a suicide rate which is four times that of the general population, increased anxiety and depression and being turned away from a primary care office, that in itself can trigger these symptoms.”

Gelbard said that it is not possible at the moment for the SHC to provide this service. With limited resources, the SHC can only treat select issues.

"At this point, with it being out of our scope of practice, we’re not there yet," Gelbard said. "I always want to ... provide more services, get better at what we do,

While the SHC can provide referrals to off-campus services, Kontor and Trettenbach don't think it's enough.

“It’s going off the campus, it’s not just extra cost, it’s extra time and extra burden and they have to ... present their stories to another doctor and it’s not easy for some,” said Kontor.

"You’re giving universities so much money," said Trettenbach. "You should at least get fair access to healthcare.”

Gelbard and the SHC Kontor's firing. 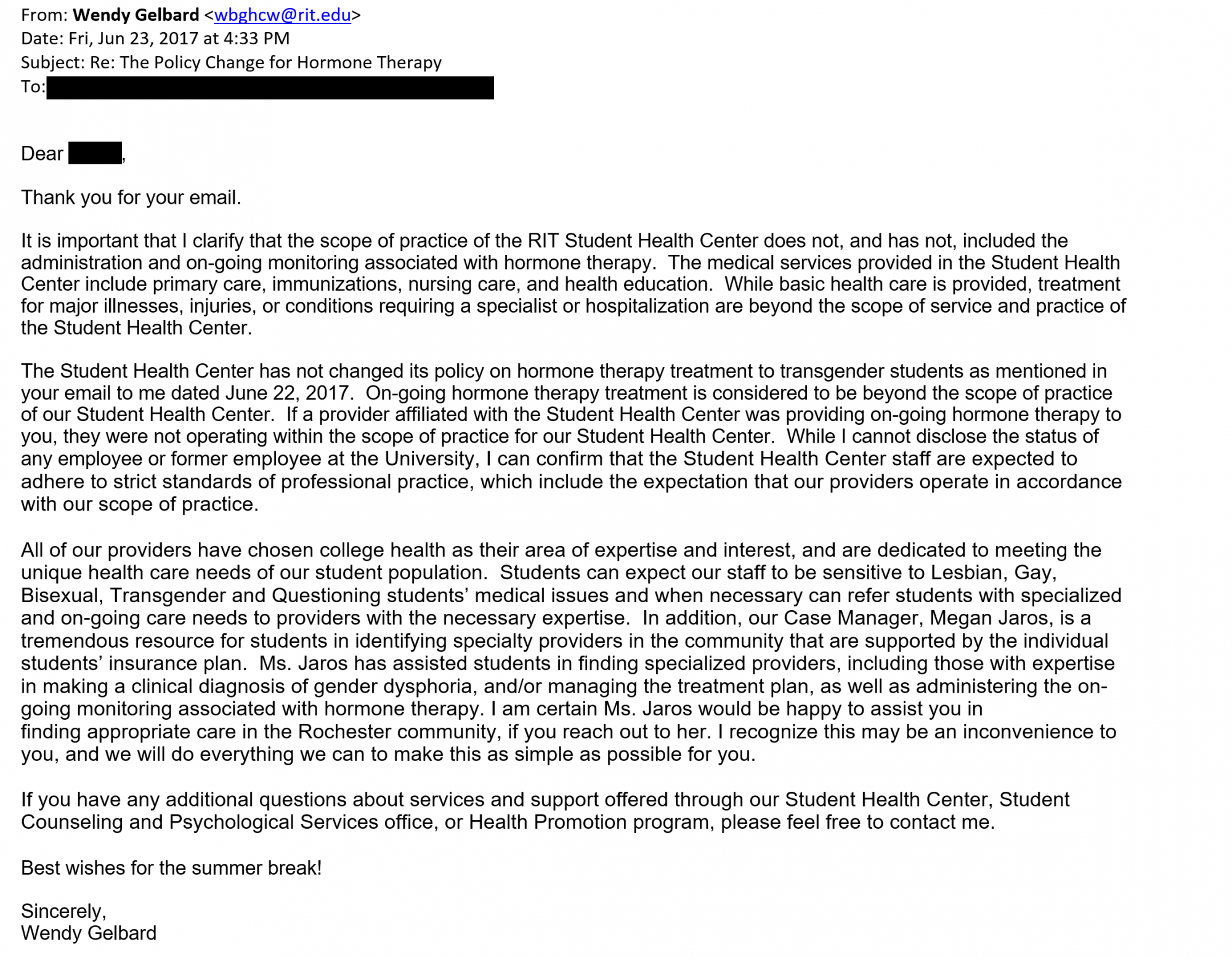