RIT recently hired its first ever farmer, David Brault. Brault, a native of Irondequoit, New York and a University of Vermont graduate in Horticulture, is now taking care of leafy greens and herbs grown on site in RIT’s new hydroponic container farm. The farm is located in a 40-by-8-by-9.5-foot up-cycled shipping container just behind the Campus Center.

“Alright, close your eyes and picture a farm. You'll see a field, maybe someone on a tractor and there's dirt and all that," Brault described. "Then you go a step removed, and you put in a greenhouse. And then you take a step farther and now you've got a hydroponic greenhouse. And you remove the greenhouse and you've got hydroponics inside this container. So it's different.”

The farm was installed on June 10, 2019. Kory Samuels, executive director of RIT Dining Services, said the project made sense with the recent renovation of Gracie’s as just another way to “up our game” in the quality of food on campus. RIT is just one of two universities in the state to have a hydroponic farm on campus, the other being Stony Brook University in Stony Brook, N.Y.

How Does It Work?

Hydroponics is defined as growing plants with nutrients and water, but without soil. The plants are rooted either in water or an artificial medium which can include substances like sand, gravel, perlite, peat moss, sawdust, coir or rockwool. 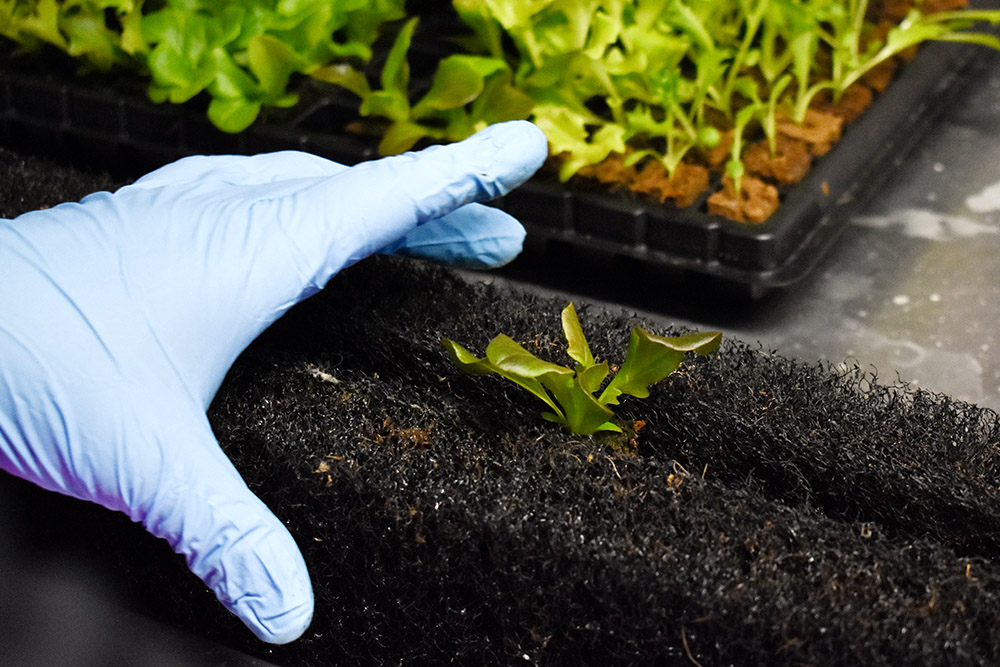 Some crops are better to grow hydroponically than others. Brault said he started by growing lettuce and herbs because of their size and quick turnover rate. Crops like corn are a less practical option because of the lower yields and the space needed to grow it. The container is lit by LEDs that use special bulbs emitting only red and blue light spectra, the most beneficial lighting for optimizing plant growth.

RIT’s farm is a vertical farming system created by Freight Farms, which has provided shipping container farms to many other college campuses. The container is insulated so crops can be grown year-round. Brault can control lighting, temperature, humidity, carbon dioxide levels, concentration of fertilizer and pH levels in the farm all from his smartphone. It operates as a closed system, meaning the water used to feed the plants is recycled for the next crops.

"This is an offering that I think distinguishes us versus other campus dining programs."

Samuels first saw a shipping container farm at a National Association for College and University Food Service conference back in 2016. Samuels had noticed an interest in seasonal menus and locally sourced produce at other universities. RIT doesn't have an agriculture school, so Samuels saw the hydroponic farm as the perfect solution for RIT's tech-oriented community.

“It was an idea that was kind of put on our roadmap that it'd be cool to eventually get to the point where we are not just sourcing our food as local as possible, but potentially actually being a part of the food system," Samuels said.

In terms of food safety, it's safer for RIT Dining to produce their own product because they can control everything, including the cleanliness of the space, the fertilizer they grow with, the water they use and who touches the product.

In terms of sustainability, Brault explained, you don't have to worry about fertilizer runoff — a major concern in conventional agriculture. It's also hyperlocal, so any emissions that would have been produced in processing and transporting the product are eliminated. 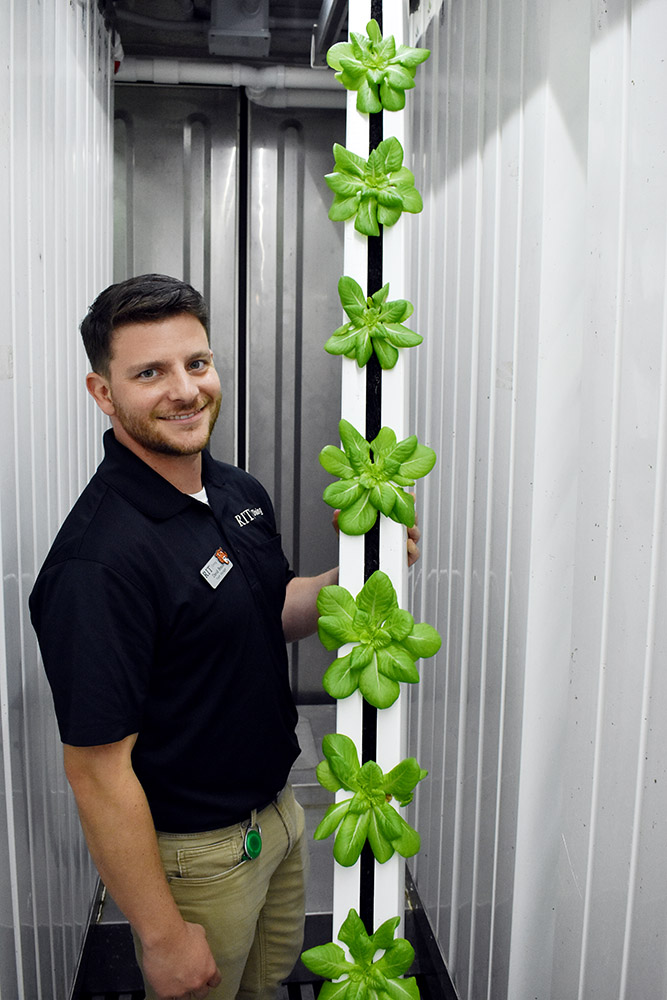 “This requires capital investment, but once it’s operational, it is lower maintenance. Also you get more yield, so you can grow a lot more in a smaller space and you can grow crops faster and you get a better quality and quantity of crop — and you can do it all year,” Brault stated.

The farm is also an appealing addition to RIT's dining resume. RIT Dining can make decisions about its offerings since it's all in-house owned and operated. Samuels and Brault see this program as a new way to draw in prospective students. Campus life is an important part of the college experience, and food is just one aspect of that. Brault thinks that students' expectations are setting the bar high.

“They [students] are starting to expect a different level of experience in dining. This is an offering that I think distinguishes us versus other campus dining programs,” Brault said.

The first container is just a small seed in a larger plan for RIT Dining and its farm. Both Brault and Samuels would like to see the program expand, in growing more crops and potentially adding more containers to campus. They also see the farm becoming a teaching tool for students. Samuels suggested farming could become a new wellness or sustainability course offering in the future for students to learn more about the agriculture industry.

"I look at the farm as a way to connect our department and students in just another way.​"

Brault was hired to jump-start the program, but there's talk of bringing in student employees to assist with planting and harvesting. There's the potential for co-op and research opportunities collaborating with programs in the academic departments or Student Affairs. Collaboration could also extend out into the greater Rochester community through programs like FoodLink and Recover Rochester, said Samuels.

Overall, Samuels wants students to use the farm to connect and gain a new perspective.

"I look at the farm as a way to connect our department and students in just another way," he said.

RIT Dining will not be able to provide all the food on campus solely from the farm as they serve over 14,000 meals per day between all of their dining locations, concessions and catering. However, the farm will produce 10 to 15 percent of the produce on campus.

The farm is currently growing bibb lettuce, salanova lettuce, basil, cilantro, parsley, kale, swiss chard, tatsoi, mizuna and arugula. Next time you are at an RIT-catered event and you see some salad, know that it’s freshly grown — right from the container.