A team of industrial engineering students represented RIT on April 25, 2018 at the CREATE Symposium, hosted by the New York State Industries for the Disabled, Inc. (NYSID). CREATE, or Cultivating Resources for Employment with Assistive Technology, is both a showcase of student-developed projects and a competition, with rehabilitation and engineering professionals judging entries from eight different colleges across the state.

“Sew Lean” was RIT’s contribution to the symposium. It was conducted by a multidisciplinary senior design team, in collaboration with the Association for the Blind and Visually Impaired (ABVI). The primary objective of the project was to apply lean principles of production to Rochester’s ABVI sewing facility. By the end of the project, the team hoped to increase workflow efficiency to aid blind, visually impaired and sighted employees alike.

"We’re all about process, and process improvement."

“It’s like a philosophy of just making sure you’re doing things in the proper efficient manner to make sure you have everything you need,” she elaborated. “And not more than what you need.”

The first step in applying these principles to the sewing facility was understanding the current state of operations. The students focused on ABVI’s Air Force pants line, documenting the existing workflow and floor layout in detail.

“We’re all about process, and process improvement,” said Jenn Palmer, the project manager and fifth year Industrial Engineering major. Most of the team’s time was dedicated to determining what that improvement might look like and how to implement it. Coming to these conclusions required input from the staff and employees at the ABVI facility.

To encourage this exchange of ideas, the team ran what are known as kaizen events, a series of short process improvements.

“You’re trying to implement small bursts of improvement by doing some little activity that ... gets the floor behind the improvement,” explained Palmer. 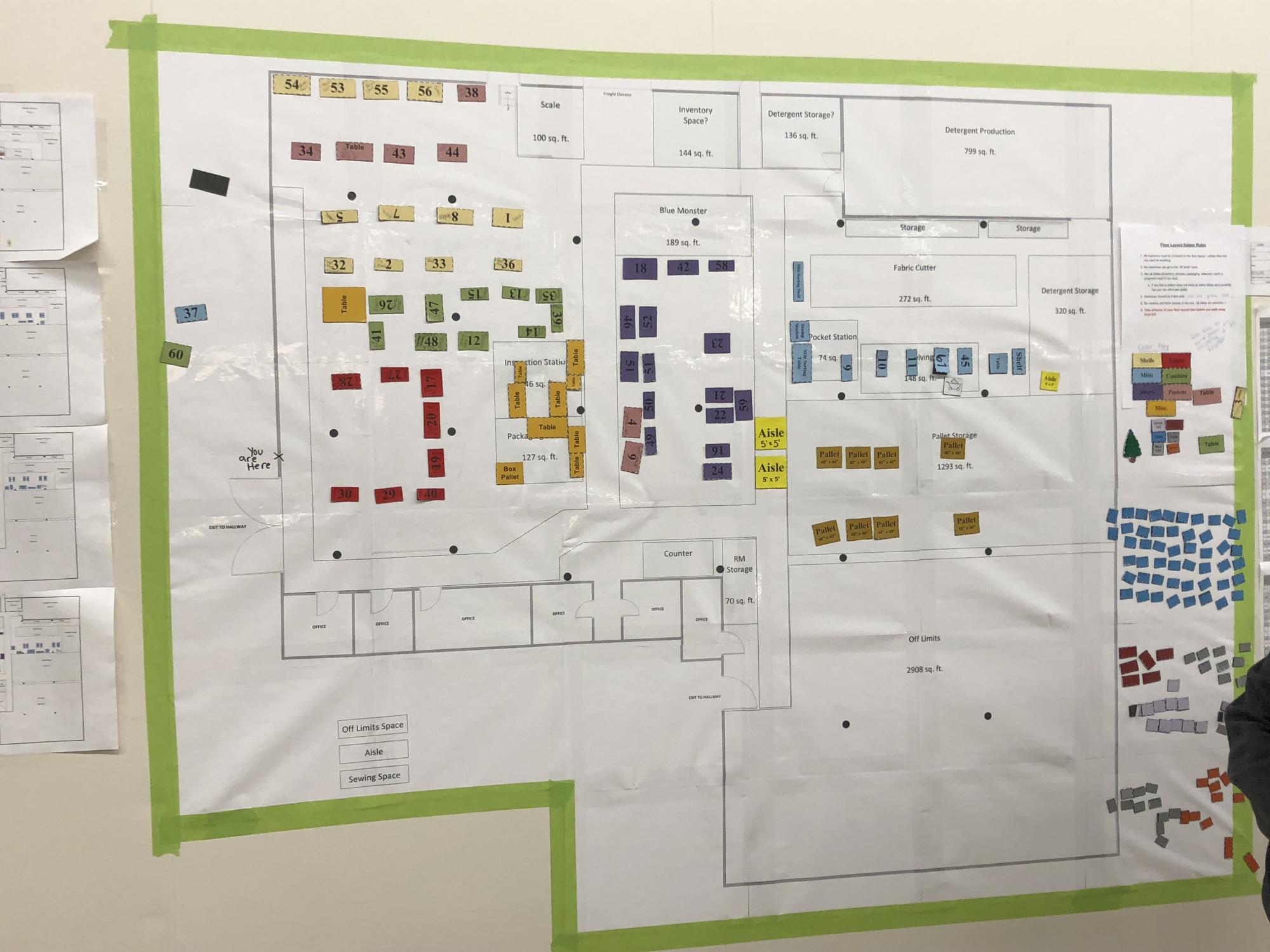 The team set up a representation of the sewing floor on a magnetic wall, with magnets for all of the machines, and asked the management staff and employees to experiment with the layout. The students asked anyone who found a layout they liked to take pictures and provide feedback, drawing from this information to form their recommendations for the facility.

Similarly, they conducted two tabletop simulations to provide practical examples of lean thinking. The goal of the first simulation was to educate employees on the concept of a learning curve, in which an individual will become exponentially more efficient as they learn a new process. This involved timing how quickly individuals could spell their names aloud, skipping every other letter. The second exercise was a mock assembly line to demonstrate the differences between batching (waiting to move materials between stations until a certain number of components have been completed) and single piece flow (moving materials immediately from station to station).

“Batching takes longer because you’re waiting until you have a set number before passing it on, so the person next to you is waiting. And a lot of what they do on the floor currently is batching, so we used [the simulation] to kind of signal that batching isn’t great, and we’re trying to move away from it,” Kittell explained.

"As an industrial engineering student you’re told that you have to make things visual."

Additionally, ABVI asked the team to help determine what changes would be necessary to increase production on the pants line by 25 percent. Based on the data they had collected, the students suggested that ABVI buy four more sewing machines and hire four more employees. The facility decided to hire eight, as many of their employees are unable to work full time. Accounting for these work hours is crucial, as the ABVI must meet a certain ratio of blind/visually impaired employee work hours to sighted employee work hours in order to maintain their government contract. They are currently exceeding it, but still aim to move towards an even greater percentage of blind/visually impaired employees.

This aspect of the facility heavily influenced the process improvements the team pursued.

“As an industrial engineering student you’re told that you have to make things visual, and to use visual management, and that lean is something that’s very visual,” Kittell said. “And then we got thrown into a project where you can’t necessarily rely on visuals, because not everyone has the same level of visibility. So we had to learn how to kind of turn those visuals into tactiles.”

One example Kittell provided was a series of bins the team set up for pants pockets to be placed in after their completion.

“I used puffy paint [to label the bins], so you could actually touch them and see what letter was on it,” Kittell explained.

The students also glued velcro to certain bin exteriors so that employees could feel what type of velcro each pocket piece required.

Other suggested improvements relied on communication and collaboration between blind, visually impaired and sighted employees. The final layout recommendations given by the students arranged station lines so that employees faced one another, allowing sighted employees to inform their coworkers if they see anything amiss. The team also implemented a simplified Andon cord system, a means by which employees can quickly ask for and obtain assistance. The system has a visual component, as well as a audible component, to ensure all employees can reach out for assistance without obstacle. This dual system allows issues to be noticed and addressed more quickly than before.

“It was a really good experience to see how you can implement lean in a non-visual fashion,” Kittell said.

Palmer and Kittell explained all of this on April 25, 2018 at the CREATE symposium. They became involved in the program after being approached by the head of the multidisciplinary senior design program about submitting their proposal to NYSID.

“We were accepted and they gave us a grant for money that we could use in the project,” Palmer said. According to her, their entry is more process-based than most of the ones that were shown at CREATE.

“I think our project is pretty unique for them to have,” Palmer said.

Ultimately, first place in the competition went to Binghamton University, with CUNY City College and the University of Albany coming in second and third, respectively. After the symposium, Palmer and Kittell returned to campus to present Sew Lean at Imagine RIT alongside the rest of their team. At the sewing facility, they’re handing the work off to the management and employees, providing ABVI with assistive materials so they can continue to implement lean production on the floor. As for the team, they’re leaving the project with experience and a new approach to what they’ve been taught.

“Remember, there’s always another way to do things," Palmer said.