On Sept. 20, 2019, there was quite the commotion in RIT's Infinity Quad. Students, accompanied by community members from the greater Rochester area, gathered to participate in the Global Climate Strike.

The Global Climate Strike is a movement that took place in over 150 countries. The movement’s goal was not to address a particular environmental issue nor to raise awareness about our planet’s warming climate — rather, students gathered to demand government action in combating the effects of climate change.

Birth of a Global Movement

The origin of the Global Climate Strike can be attributed to then 15-year-old Greta Thunberg, a Swedish student who demanded her government actively address climate change. After her plea to the Swedish government captured the attention of others globally, the movement took off as students across the world decided to start their own strikes.

Eventually, the movement grew beyond just students. Others concerned about the Earth’s climate joined the new and energetic campaign. The movement reached its greatest achievement to date when Thunberg was invited to New York City to address her concerns to world leaders at the U.N.’s climate action summit.

“I had noticed that there wasn’t one going on at RIT ... so I decided to start it,” Watts said.

The Global Climate Strike at RIT stayed true to the mission of the movement as they called on members of the tiger community to reach out to their representatives and demand action be taken against climate change.

“The way for things to really change, is for our laws to change,” Watts said. 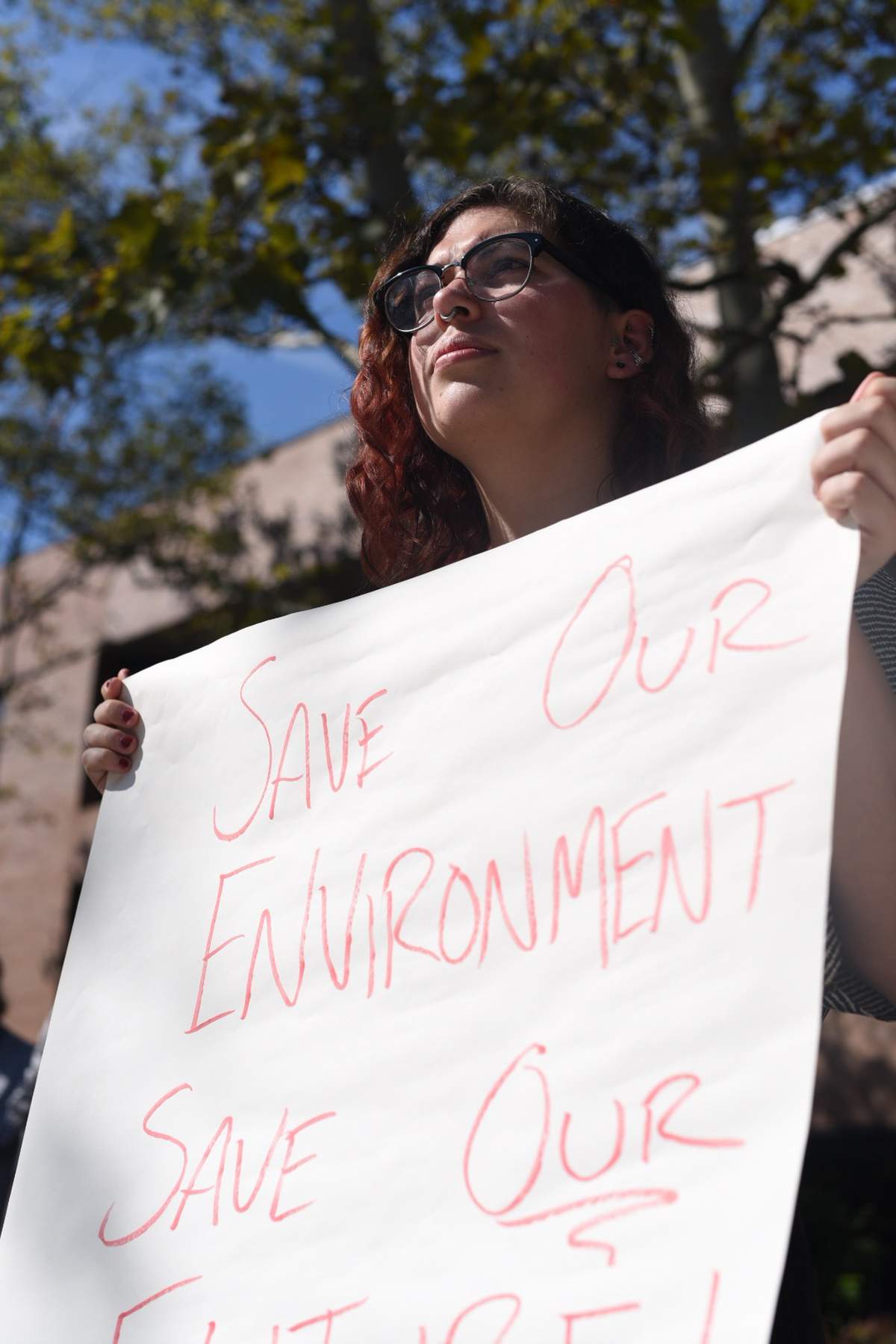 Initially, the strike on campus did not have as much strength as the other events across the area. However, throughout the day, the Global Climate Strike at RIT grew in strength as students from a broad variety of majors decided to take time to show their support for the movement’s cause. Students dropped their backpacks and picked up signs, proving that Watts wasn’t alone in fervor.

“I hope that my peers can see that it is something that I care about,” Daugherty said.

She was joined by Anjali Gottipaty, a fourth year Psychology major, who wanted to help promote the Global Climate Strike’s visibility by participating at the on-campus event.

“This is the only planet we have ... if we don’t stand for it, who else is going to?” Gottipaty said.

On the other side of the Infinity Quad, students who weren't participating in the strike listened to the movement’s message. They weighed in their opinions as they took a break from classes.

Though he was not actively participating in the Global Climate Strike, Braedon Williams, a fourth year Biomedical Engineering and Science, Technology and Public Policy dual major, agreed with the participants’ message of climate change as a top political priority.

“In general, I think it’s important, at the very least, to display your commitment for these kinds of things,” Williams said. 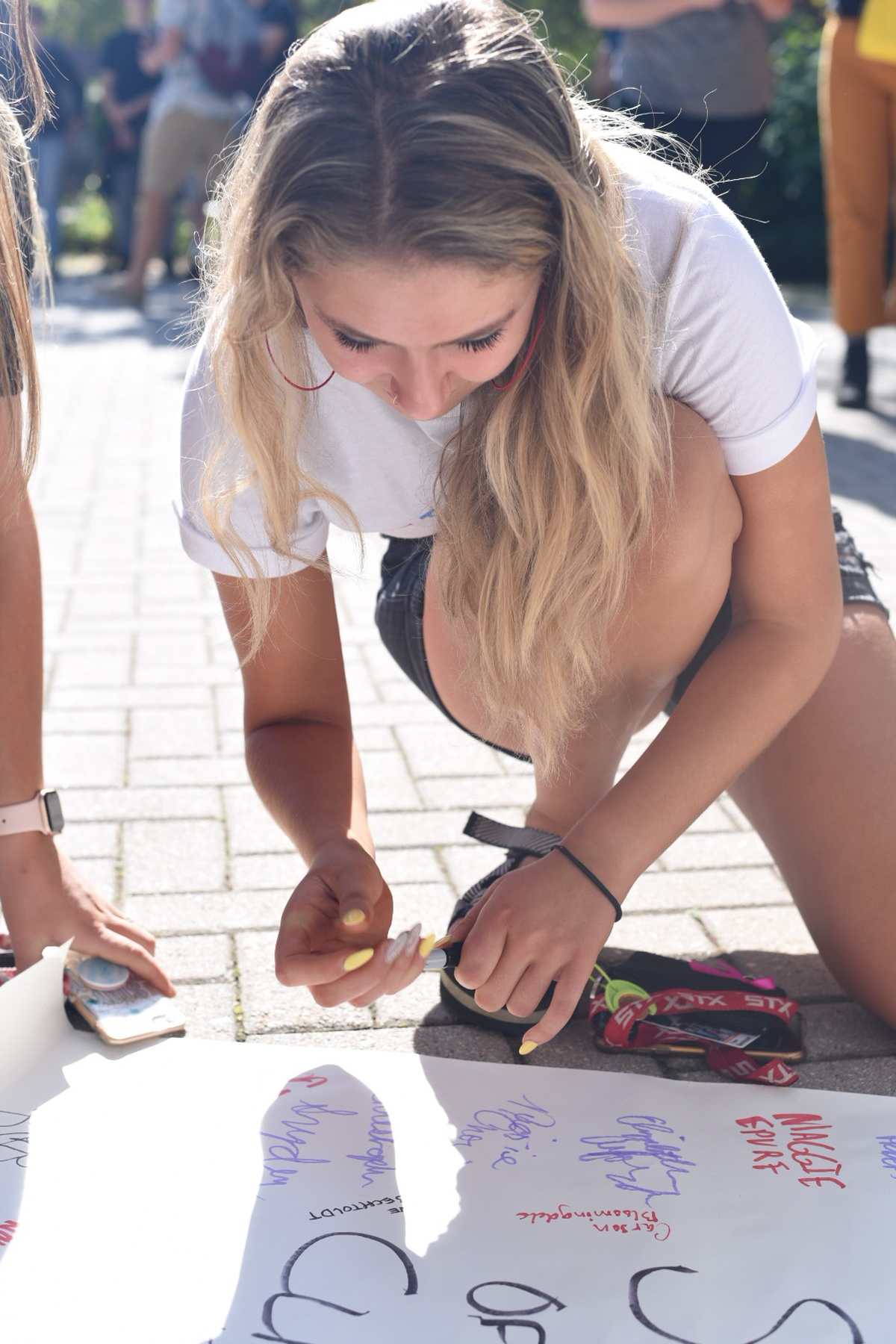 Ryan Cheevers-Brown, a first year Computing Security major, agreed that supporting environmental and political movements is an important part of being a citizen.

“I always make an effort to come to political or environmental events that I agree with,” Cheevers-Brown said.

The strike lasted most of the day, requiring participants to commit themselves even if that meant missing classes. The devotion and energy of the involved students brought outside media in the form of local news stations and newspapers. The media coverage was an unexpected benefit, helping promote the voice of the movement to members of the local community.

Participants at the Global Climate Strike were pleased overall with the turnout of their fellow students and reminded everyone that climate change is something that affects everyone.

“This is important, this isn’t a joke ... it’s actually something that impacts all of us,” Gottipaty said.

Any movement wouldn't be complete without some criticism. “Climate now, homework later” was a major chant heard throughout the event, and a few students were displeased with the disruption of education that the movement was endorsing.

“You need education in the subject if you want to move forward,” Warntz said.

While he noted it was great to see students showcasing their enthusiasm for actions against climate change, he believes attending classes does more in the long run for progress.

“People need to have strong foundations if they want to innovate and create new solutions,” Warntz said.

While sitting through class may not seem like the most effective way of fighting climate change, education plays a central role in understanding how we can alter the effects that our planet is experiencing.

Future of the Global Climate Strike

As the movement’s events waned down as the week progressed, people were left wondering — what's the next step for the movement as a whole? As of now, there is no clear-cut answer.

The movement has set up social media sites and an email newsletter system, while also encouraging its members to keep participating in local grassroots movements. Only time will tell if the Global Climate Strike achieves the effect it wanted​ to make.

As Watts explained, “If you want to make a difference, you have to just go do it.”