“I answered the door and it was any parent’s greatest fear," said Sarah Clemens, mother of Rochester Institute of Technology student Chris Clemens. "There was a policeman at the door. He came in and told me Chris was in an accident - he’d been hit by two cars.”

Neurosurgeon Dr. Edward Vates, who operated on Clemens when he first arrived to the hospital, explained what a DAI means. “The brain is made up of cells and those cells need to reach down to get to your arms and legs to make things move and to sense things and the things that connect the cells in your brain down to your arms and legs are things called the axons," Vates said. "The brain has a lot of axons in it and the axons act a little differently than the cell bodies do and if someone is moving and stops moving, for instance in a car accident or a fall, the cell bodies will move in one direction and the axons won't necessarily move the same way. That means that the axons can actually get disconnected from the cell bodies.” 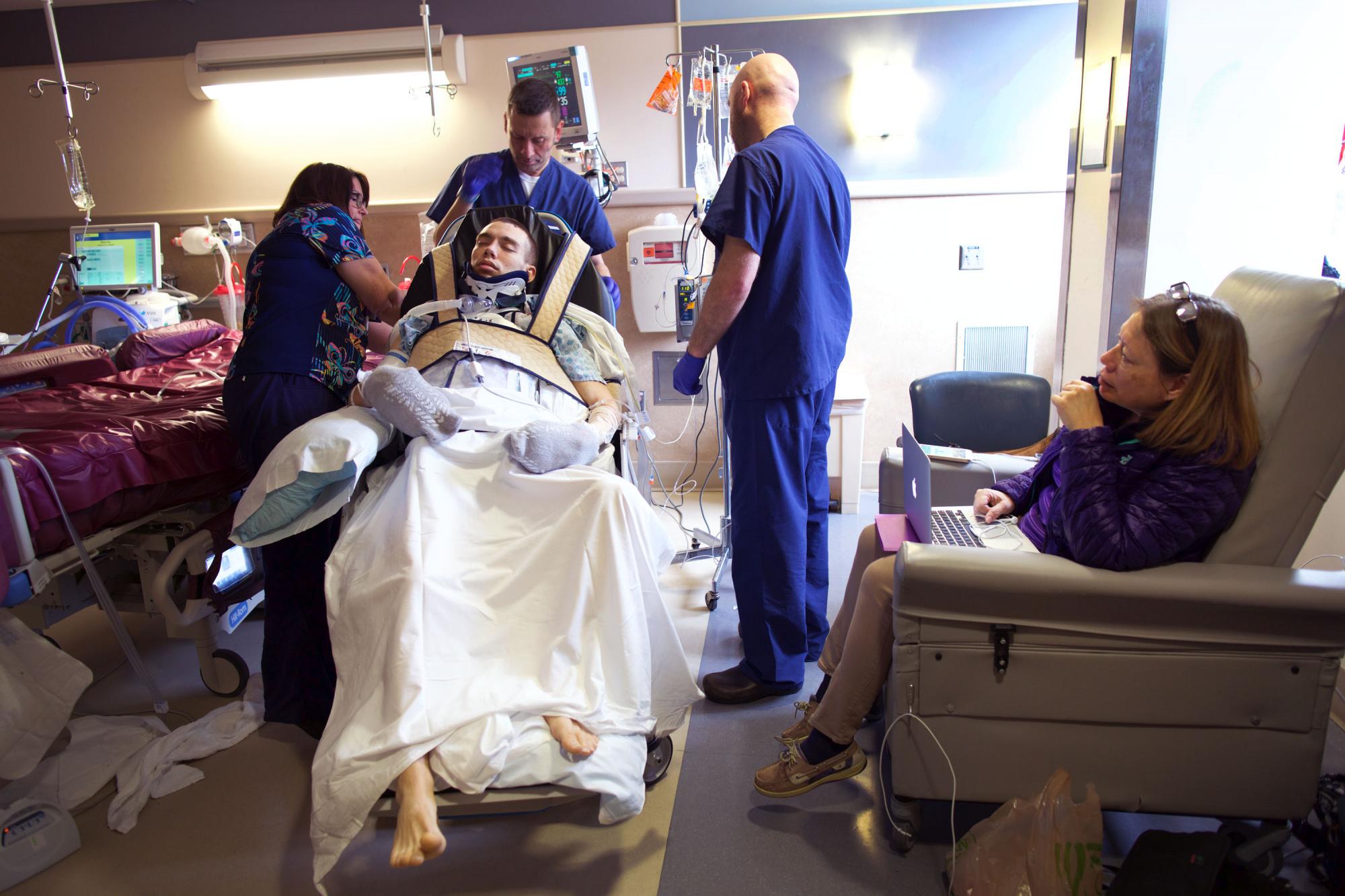 Sarah and Chris’s sister Jennifer Clemens arrived in Rochester after a day of traveling from Mount Desert Island, Maine. For a week, Jennifer and Sarah stayed at Chris’s bedside, prompting him to open his eyes, respond to commands or show any sign of purposeful movement while he lay unconscious. “He was just laying there with the tubes and the ventilator for breathing," said Sarah. "He wasn't breathing on his own and when I saw him like that, all I could picture was that that’s the way he was going to be for the rest of his life.” Sarah and Jennifer created a blog on the Caringbridge website and used that to document Chris’s daily progress for friends and family.

Little by little, Chris came to make progressive steps. One day it was opening his eyes. The next day it was moving his arms and legs. Then, it was taking his arm and putting it up towards his neck area, attempting to take tubes out, which was defined as purposeful movement. This was a significant step. On February 28, Chris looked at his mom and smiled at her when his nurse told him to. On March 2, Chris did the impossible and regained himself. Sarah wrote the following on Caringbridge:

"I am writing this update today as a very happy mother. I saw some of Chris’s personality today. He opened his eyes and mouthed words to people throughout the day. The first time was Chris just counting, '1, 2, 3, 4, 5, 6.' Then, a doctor came in and asked, 'How are You?' Chris mouthed, 'I am fine.'  The doctor said, 'Good Morning' and Chris said 'Good Morning'. Later another doctor came in and I asked him to say hi to the doctor… and he did, 'Hi Doctor' he mouthed. We asked him if he hurt and he mouthed, 'No.' We asked him if he wanted to listen to music and he mouthed, 'No.' Around 2pm, he mouthed 'Mom' so urgently that, even with a trachea in, Holly and I could hear the whispered word that melted my heart. If you know Chris, you know that he likes to do things in a grand way. Well, his first full long sentence was no different.  His grand finale was mouthing... very clearly and repeating it just in case Holly and I missed it the first time... 'Mom, Shut the F… Up!'  That’s my boy! I am a happy mother! Chris is waking up!" 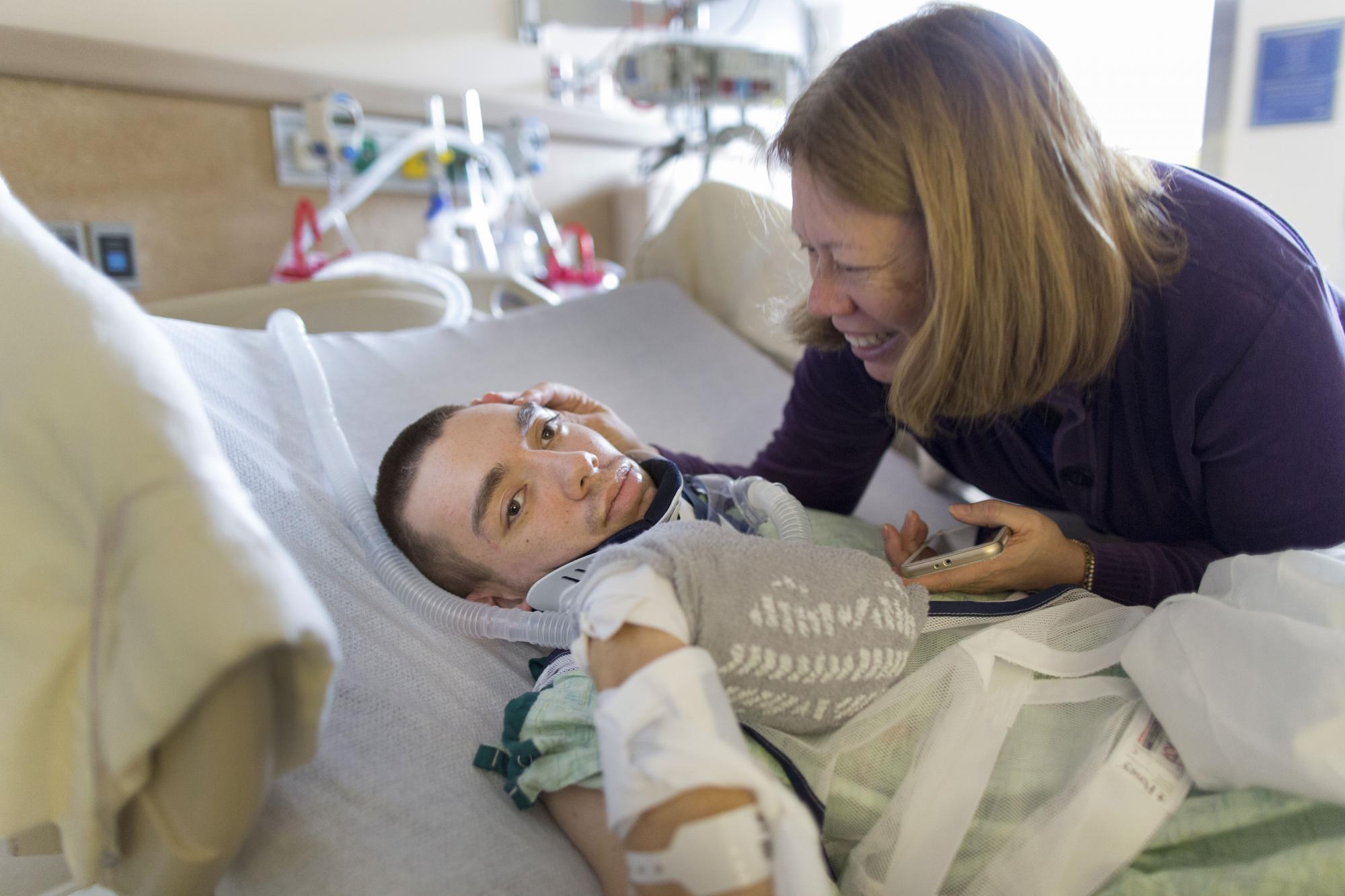 Within 24 hours, Chris was transferred to Golisano Restorative Neurology Rehabilitation Center and from that moment, his recovery proceeded to be miraculous and speedy, just as everyone prayed for.

After just one week at Golisano Rehab, Sarah said, “He’s a completely different person. He’s talking, he’s laughing, he’s got expression in his face…my Christopher is back.”

For five and a half weeks, Sarah stayed in a room with Chris while he spent his days at speech therapy and occupational therapy. He and Sarah worked hard on transferring from the bed to the wheelchair, to prepare for his eventual homecoming. Every day the nurses, psychologist, therapist, family and friends would ask him the same questions to test his memory. “What is your name?”, “Where were you born?”, “How did you get to the hospital?”, “What year is it?”, “Why are you here?” Chris’s answers varied for days. He responded saying it was 1926, that he was at Strong Memorial Hospital rather than Golisano Rehab Center, and that he was there because he fell on his longboard. Little by little he began to realize what happened, where he was and why he was there, and in due time he passed his Post Amnesia Test. It was then decided that Chris was ready to go home.

On April 8, Sarah, Sarah’s brother, his wife Paul, Julie Mun and I began the trip home to Mount Desert Island, Maine. With a smile covering his face, Chris waved to the crowd of nurses cheering and clapping as his mom pushed him in his wheelchair to the elevator of Golisano Rehab for the last time. 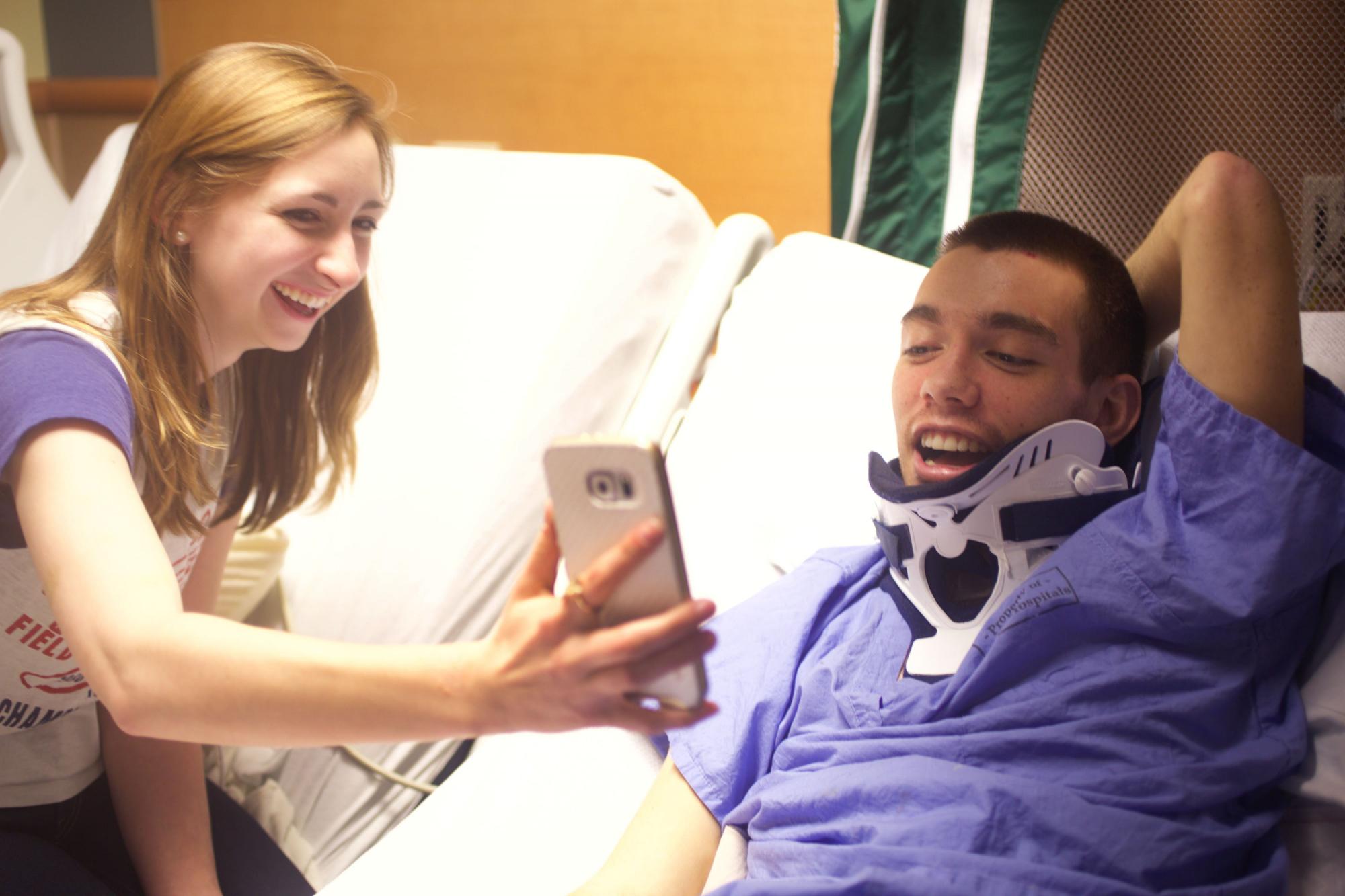 After spending Saturday with extended family in New Hampshire, we all excitedly geared up for the last leg of the drive to Maine on Sunday, April 10. While passing the state border into Maine, Chris explained what the "Chris Percentile" was.

“My mom said that she read that 90 percent of people with my injury don’t wake up,” said Chris, “and that the 10 percent that wake up aren’t the same, but I’m going to be okay. There’s no percent for me, I’m the Chris percentile.”

The smile on Sarah’s face matched her son's as they rolled into the driveway of their home. Chris’s sister Jennifer was out the door before the car was parked. Inside, streamers and balloons filled the house to finally welcome Chris and Sarah back home.

Chris continues to recover at home with an incredible amount of support from his mother, sister and brother. A wheelchair lift has been installed in the garage of their house, and Chris has resumed physical and occupational therapy, constantly working toward a full recovery and a plan to come back to RIT the spring of 2017. 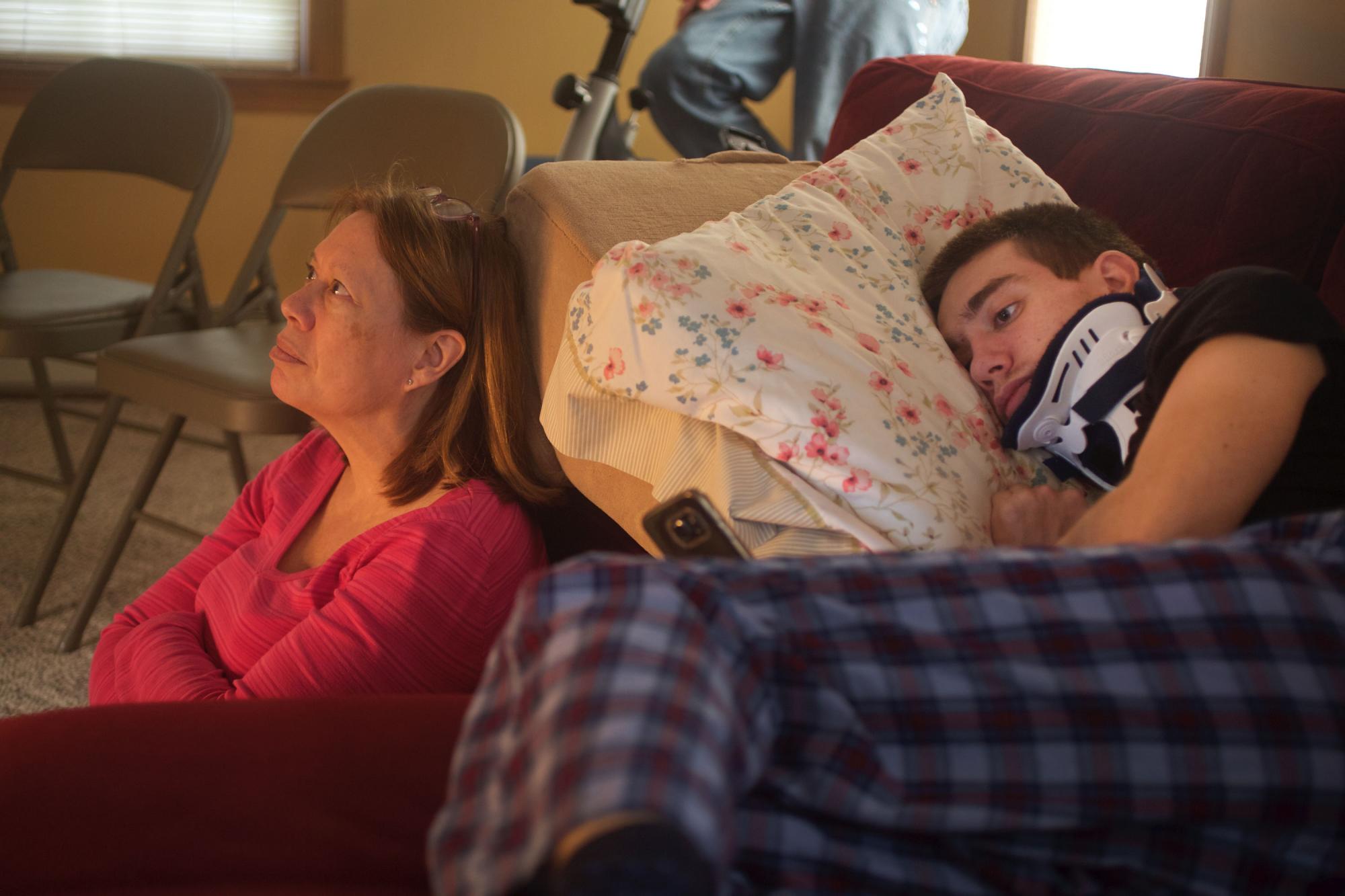