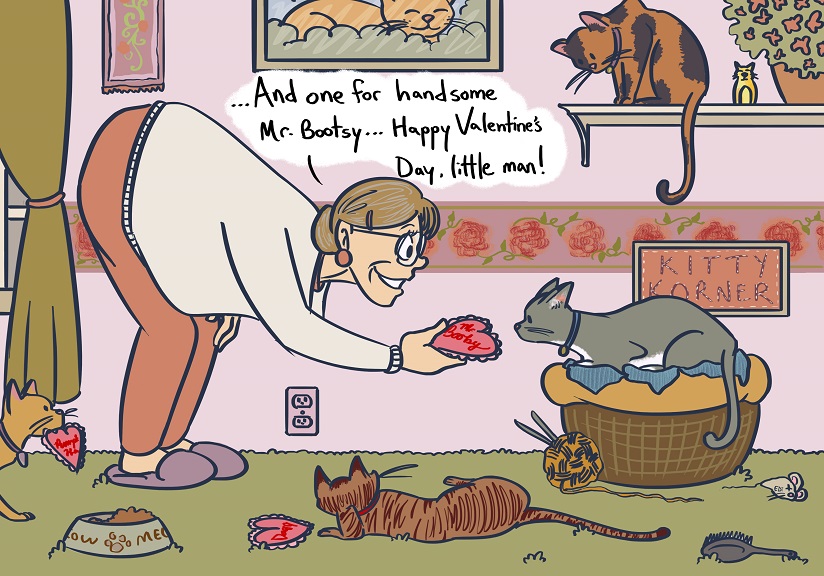 Word of the Month:

Janet’s boyfriend, Tony, would not respond to the hypocorism Fluffy, much to her disappointment.

In a recent study, it was found that Tylenol or acetaminophen can be used to reduce feelings of dread and social rejection. Participants were given Tylenol before told to remember a painful experience. Those who took Tylenol reported less emotional pain than patients that took a placebo.

In Korean, wisdom teeth are called Sa-rang-ne or “love teeth.” It is said to be named after the pain of first love and the growth of the person into young adulthood.

Storge love is one of the six forms of love defined by social psychologist John Lee in 1976. It is when a person displays love for those friends who are closest to them.

The Bronx Zoo allows visitors to send their message of love by naming a cockroach after their sweethearts on Valentine’s Day.

Sweethearts and would-be lovers used to have an intricate system of signaling messages to people through the placement of stamps on an envelope. If a stamp was in the upper left corner, upside down, it meant “I Love You.” If in the top right corner, upside down, this meant “Write No More.” Many other meaning can be found from stamp placement.

There’s always one piece of media from a series or franchise that goes completely into left field and ends up drawing sour reactions from people. Some like to get very nitpicky and avoid even the slightest changes to established mediums.

Recently, I’ve left this facet of my media consumption at the curb and have been enjoying things more as a result. What does this mean exactly? Rather than criticize every little detail in that recent film of your favorite novel or that praised gaming franchise that eschewed its comfortable conventions for something unique, try to look at these things holistically. You would be surprised how much fun or enjoyment you can have from something when you don’t worry about every minute switch up, change in plot or mix up in mechanic.

This was spurred on by the purchase of the ill received “Paper Mario: Sticker Star.” Sure aspects of the battle system are flawed, the lack of many memorable characters made the game’s plot ho-hum but I really enjoyed the non-linearity of the game, the clever while occasionally cryptic puzzles and the addictive nature of finding and creating stickers from real world objects.

So, just relax when something like the recent Hobbit film isn’t 100 percent the same as the book or a critically acclaimed game isn’t what it’s cracked up to be. Take in the good and the bad. You’ll be happier.