A Summer of Street Art

2009 and 2010 were especially violent years for the city of Rochester. According to the 2012 Adolescent Health Report Card, homicide was a leading cause of death for youth in those years  and assaults sent hundreds of teenagers to local emergency rooms. Dr. Ian Wilson was disheartened by the youth-on-youth crime in the city, which reminded him of his childhood in New York City, and was inspired to take action to make the city a better environment. Drawing on his memories of visiting graffiti walls in NYC to seek respite and inspiration while growing up, Wilson set to work making connections to create a solution.

In 2011, Wilson brought in four South African graffiti artists (Faith47, DALeast, MAKone and Freddy Sam) who worked with FUA KREW, local graffiti artists, on his brainchild — a mural collective that was then called “Visual Intervention,” but would eventually become WALL\THERAPY. "Believe," a collaborative mural completed by the artists, shows each one’s distinct style, but its message is overwhelmingly clear and represents the ideals the WALL\THERAPY initiative stands for. As worded by Erich Lehman, co-curator and lead organizer of WALL\THERAPY and the Premedia Facilities Coordinator within RIT’s School of Media Sciences, “believe in something, believe in yourself, believe in your neighborhood, believe in your family, believe in your future, but please, please don’t forget to believe in something.”

Lehman initially became aware of Wilson’s project in 2011 after meeting the artists who were painting murals underneath the bridge by the Rochester Public Market. It wasn’t until a month later that he met Wilson himself, but the two became instant friends. Lehman agreed to help Wilson with marketing, web design and getting the word out about WALL\THERAPY, and in 2012, was asked by Wilson to be the project’s co-curator and lead organizer.

WALL\THERAPY has become an intervention initiative to inspire and bring the community together through public art. It has evolved over the years, but the main objective is to turn the city into an art gallery, open 24 hours a day to anyone. Each summer, artists from all over the globe are invited to spend a week in Rochester transforming walls around the city; since the project's inception, 75 artists have participated. A total of 115 murals have been painted throughout the city. About 10 have been lost due to vandalism, buildings being razed and the elements. Lehman concedes, “That is the nature of street art: it is ephemeral, it is not designed to last per say. It’s about the moment and seeing it while you can.”

“That is the nature of street art: it is ephemeral, it is not designed to last per say. It’s about the moment and seeing it while you can."

Sarah C. Rutherford has been involved with WALL\THERAPY since its early days, and painted her first mural for the project in 2013. Mural work has allowed Rutherford to satisfy her desires behind making art that traditional painting and gallery settings did not, and she points to WALL\THERAPY as shedding light on the muralist path she’s currently pursuing. “With all my experiences surrounding WALL\THERAPY, both as an artist and a team member, I have gained immensely from the community aspect of these experiences — from watching how other artists approach a wall mural installation, to sharing experiences surrounding the unique challenges of public art, to simply gaining friendships with other artists engaged in the same meaningful work from around the world.” 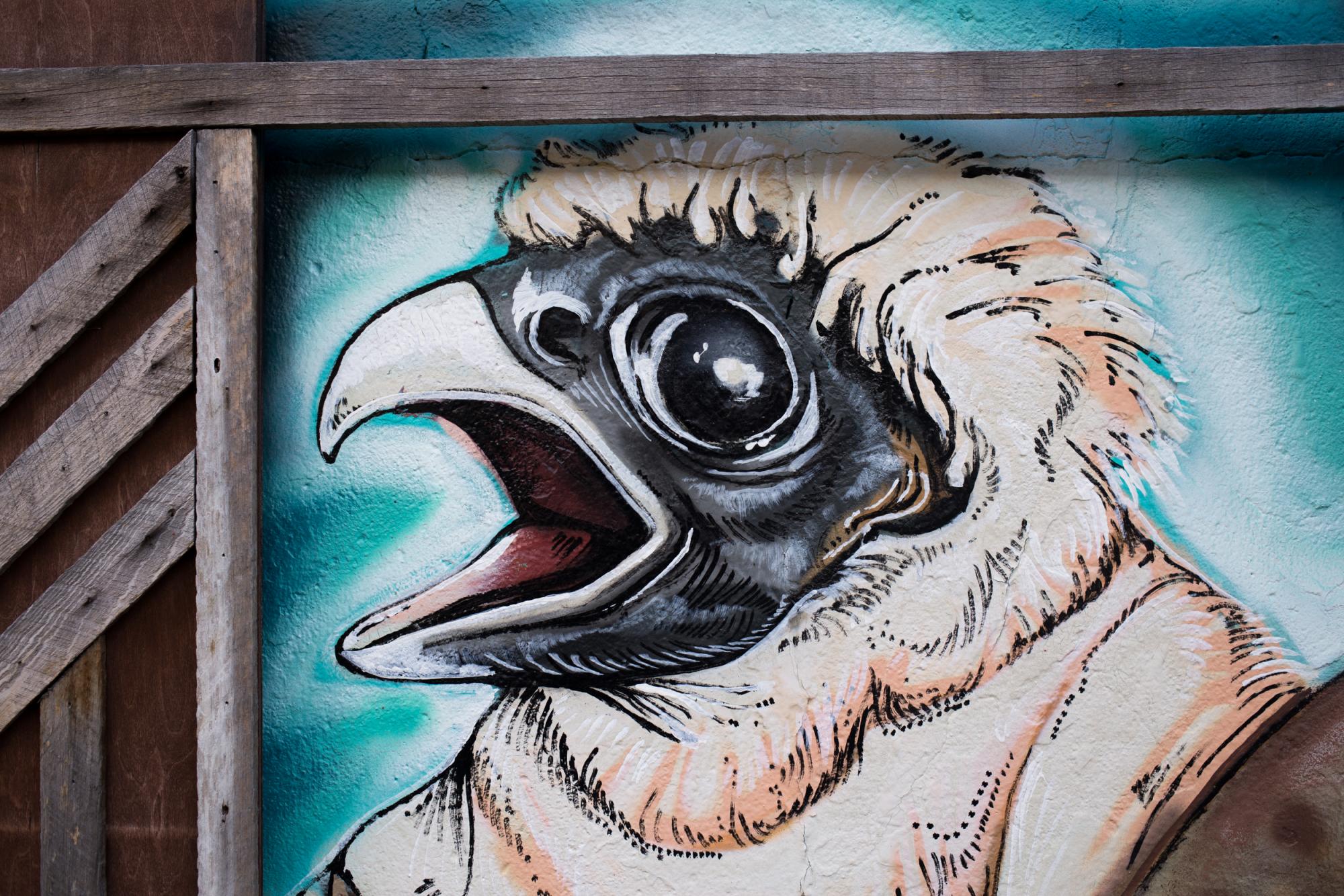 Spending the summer on co-op or taking classes in Rochester? In your free time, be sure to check out WALL\THERAPY's presence in the city. Follow this guide to complete a walking/biking tour of some of the WALL\THERAPY murals downtown. The total walking route is 3.2 miles and will take approximately one hour and five minutes to complete; the bike route is 3.6 miles and will take approximately 24 minutes to complete (both are a full loop). Of course, these time estimates do not include all the minutes you’ll spend taking photographs and ogling the incredible art or the detours you may take as you spot additional murals along the way.

“The Ones We Love” by Sarah C. Rutherford

This piece, done by an artist who is a “Rochester transplant” or not originally from the area, is about protecting family and finding a home in the city, and then nurturing the growth of that adopted family.

“'Til We Meet Again” by Erich Lehman and St. Monci

The building now occupied by Ugly Duck Coffee was home to the 1975 Gallery, owned by Lehman, up until 2015. When he left the space to take an extended hiatus, Lehman wanted to leave a mark that would both thank the community and let them know that he was simply taking a break, but wasn’t done. “It wasn’t goodbye, it was ‘til we meet again,” Lehman says.

One of the original pieces from 2011’s “Visual Intervention,” Freddy Sam’s mural is painted on the underside of the bridge on both sides of the road. He has since painted other pieces in Rochester.

“Love Is Sacrifice” by Jeff Soto and Maxx242

This piece, stretching across the entire side wall of the Flower City Produce Company at the market, is a dedication to the artists' ancestors. Soto’s grandmother came to Rochester from Sicily and this wall was the closest location to the home she grew up in that WALL\THERAPY could secure for a mural. Maxx242’s Guatemalan heritage shines through with inspiration drawn from Day of the Dead motifs. Finally, the broken antler symbolizes the roots we lay so that our families can grow.

Above brought his trademark upward-pointing vibrant arrows to Rochester in 2014.

“Payback” by Onur and Wes21

One of 2015’s murals, “Payback” depicts what might happen when animals start to get revenge for man's destruction of their habitats.

Check out this year’s artists at work, painting walls throughout the city. The theme for 2017 is loosely based around narrative storytelling, highlighting artists who come from marginalized or at-risk communities. Themes will include the refugee crisis, immigration, women’s issues and of course, youth and the community.

Open to the public, this conference focused on activism and the arts will be the project’s first. Organized to feel more like a community festival, the conference will include artist talks by this year’s muralists, food trucks, art vendors and live music. As the date approaches, more details will be posted on wall-therapy.com and on WALL\THERAPY’s social media pages.