"Stranger Things 2" Is Both Fun and Frustrating

If you really wanted, you could put almost every part of “Stranger Things 2” into one of two boxes. There are the 80s pop culture clichés, archetypes and tropes the show subverts viewers’ expectations of. Yet, there are also the trite — and sometimes problematic — aspects of that period’s fiction that the show unabashedly uses.

The line between subverting and embodying the aforementioned conventions is a delicate one, and you don't always know what the writers (in this case the Duffer Brothers) intended. It is telling when it comes to "Stranger Things" though, that it's the show's performers who excel the most at challenging viewers' assumptions.

Subverting Itself and Little Else

In season one, one of the most subversive performances was  imbued what could have been a one-note character (Joyce Byers) with an unexpected level of tenacity and sincerity. The raw emotion and vulnerability David Harbour brought to Jim Hopper was just as much of a welcome surprise. To the writers' credit, Hopper’s season one arc — where his efforts to save Will were tied into his grief over losing his daughter — was in fact of the familiar "gruff town sheriff."

Yet, “Stranger Things 2” in many ways seemed satisfied with only being a celebration of 80s pop culture. The Duffer Brothers clearly love the media of that era, but it is not apparent that they want to say much more about it than they already have.

That is not to say fiction can’t exist to just be entertaining. But when a show is using so many familiar ingredients, it can be hard to not want to display a little more self-awareness. It is a let-down for to follow the beaten path so devotedly and not seek out unexplored trails. Especially when there might be new creative approaches that could shed fresh perspective on what is widely considered nostalgic comfort food.

The biggest missed opportunities are arguably when "Stranger Things 2" doesn’t question, but still recycles, a number of unimaginative, gendered aspects of the fiction that inspired it. The show — whether it realizes it or not — seems to think that nostalgic stories of "kids having bike-riding adventures with their friends" can only be shown through the lens of boys of that age.

What’s most frustrating is not even that several stories like that already exist, but how “Stranger Things” perpetuates the dynamics of that sort of setup without questioning it. Choosing not to tackle its conventions not only makes those shamelessly reused elements feel iterative, but it undercuts the resonance of even the show’s most joyous and inspired parts. To a large swath of its audience, the show is implicitly saying, "we’re letting you watch and be a part of it, but this isn’t your fun."

When faced with the prospect of Max (Sadie Sink) joining their friend group, it was frustratingly trite to see Mike (Finn Wolfhard), Dustin (Gaten Matarazzo) and Lucas (Caleb McLaughlin) have a comparable reaction to her as they did to Eleven.

As noted by Linda Holmes on NPR’s "Pop Culture Happy Hour," the show’s imagination is limited to portraying [Mad] Max’s introduction as "yet-another" mysterious and abnormal figure. “Stranger Things” can’t seem to frame the entrance of a girl into a friend group as something other than out-of-the-ordinary. Recall how Eleven is often referred to as their “Mage” and Max subsequently adopts the moniker “Zoomer.”

It doesn’t help that when Max is a focus, it is usually through the boys’ POV — gazing at her, or commenting about their feelings about her off to the side.

Similarly, it is irritating that one of Max’s other most defining characteristics is her centrality within a love triangle constructed by Lucas and Dustin. It’s a well-worn setup that uncomfortably treats girls/women as plot devices and sources of motivation for men to argue amongst themselves about.

Not only is it especially disconcerting to see this perpetuated with adolescent characters, but in cases like Nancy’s (Natalie Dyer) it can also come to largely define them.

I recall thinking during so many "Nancy and Jonathan" scenes this season, that the show wasn’t that formulaic. That even when Jonathan (Charlie Heaton) and Nancy getting together seemed inevitable, I figured their arc would take some sort of clever turn.

It didn’t help that the show was undercutting their own dumb love triangle by giving the phenomenal Steve (Joe Keery) so much to do. It might even be Keery's performance this season — and Steve's evolution from jock to bat-wielding babysitter — that is the most subversive element in “Stranger Things 2.” The budding friendship between him and Dustin was a far more interesting dynamic to watch than Nancy and Jonathan’s.

Wasting so much time on a contrived romance no one is really invested in is banal in and of itself. More notably though, it robbed Nancy of any opportunity to be more individually defined as a character. With the rest of her time in season two spent seeking "justice for Barb," nothing more is really learned about who she is as a person. Hopefully in the next iteration, Nancy’s (and also the aforementioned Max’s) story will be about something other than navigating how some dudes feel about them. 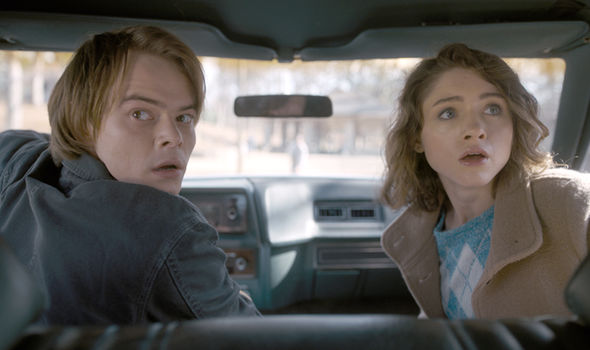 One, of course, might also have this wish about Eleven (Millie Bobby Brown). Particularly her contrived — and violent — jealousy about another girl (Max) talking to Mike. Apparently, the Duffer Brothers haven’t heard that there can in fact be more than one girl per friend group.

Additionally, Eleven’s jealousy seems to have been invented so that instead of leaving her secret cabin to rejoin her friends, she would instead seek out her mother. Which in the grand scheme of things, was so that she would later go to Chicago for a bunch of punk and plot stuff. You know, a power upgrade that conveniently comes in handy during the season’s climax and also what we can only presume is set up for future seasons.

To be honest, the moment-to-moment beats of episode seven didn’t bother me as much . What did bother me was letting machinations of the larger story — and not Eleven’s own character — determine her journey this season. It especially stings since Millie Bobby Brown might be the show’s best performer.

This is evident in her foster family relationship with Hopper. Scenes which were poignant and natural progressions for each character. Eleven gaining a real parental figure in Hopper also served to show that character moving on from his own daughter’s death. On some level, it’s hard not to enjoy the show’s two best actors just getting to talk in rooms — or a room, I guess.

Indebted to Everything but Eleven

Yet, Hopper keeping her locked away in a cabin is a pretty perfect encapsulation of how the show is treating its most physically capable character. Whether through narrative contrivance or protective parenting, “Stranger Things” has yet to let Eleven explore an arc that’s born out of the character’s own motivations. It’s hard to say she doesn’t have agency when she is the one always saving everyone. Yet, like Nancy and Max, the show is going to great lengths to only let us get to know Eleven based on her relationship to boys/men.

Even in season one, the show presents Eleven as this E.T.-like figure that Mike and his friends discover — not to mention Mike’s secret and mysterious predestined girlfriend.

For me, the whole idea of Eleven and Mike’s relationship being something other than a really good friendship seemed far-fetched from the get-go. For one: they're kids and it seems a bit weird to have your show’s "official couple" be 12/13 year olds.

and never really conveyed anyway that Mike’s feelings were reciprocated. So, when they reconnect at the Byers’ house in episode nine this season, the show operating under the assumption that it was mutual felt quite manufactured — as did the emotional endnote of season two being their dance and kiss at the most

That in fact might have been the greatest missed opportunity for “Stranger Things 2” to say something about the gendered 80s pop culture elements they were playing with. Viewers are savvy enough to know what a school dance in such media is supposed to mean. So instead of playing into the expectations of the premise, I wish the show was bold enough to do otherwise — maybe by ending on a note that illustrates how their bond can be meaningful even if it isn’t romantic.

Yet it’s hard to enjoy any story that seems more beholden to generic narrative conventions than its own characters. Especially when the show twists and turns itself in order to adhere to these norms. Norms that don’t add to a series’ story and, for a large part of its audience, undermine its ability to be the delightful and charming experience it set out to be.