As I dipped Triscuits into Nutella for my 3 a.m. dinner, I wondered to myself if a dietary change was in order.

From articles and books to the food itself, it’s pretty much impossible to avoid our cultural obsession with diets and what we eat. If there’s anything that everyone has an opinion about, it’s what you should put in your mouth. Diets become considerably more complicated in a college setting; balancing school, work and play tends to push a healthy diet to the back-burner.

When talking to RIT Dining Service’s Registered Dietician Mary Anne McQuay about healthy choices on campus, she was frank. She said that although healthier choices exist on campus (she stressed “healthier” over “healthy”), RIT is beholden to certain demands.

“The number one item that we purchase the most of are chicken fingers. That kind of tells you where people’s desires are,” McQuay said.

Could someone comfortably adopt an alternative diet with only foods offered on-campus by RIT, with no ability to prep his or her own food? There was only one way to find out.

The first diet I tried was the Paleo Diet. The Paleo Diet is based on what our ancient ancestors ate back when we were hunter-gatherers. That means no grains, dairy or processed foods. Ignoring the fact that our cavemen predecessors actually did eat grains, the diet has an undeniably attractive logic to it. 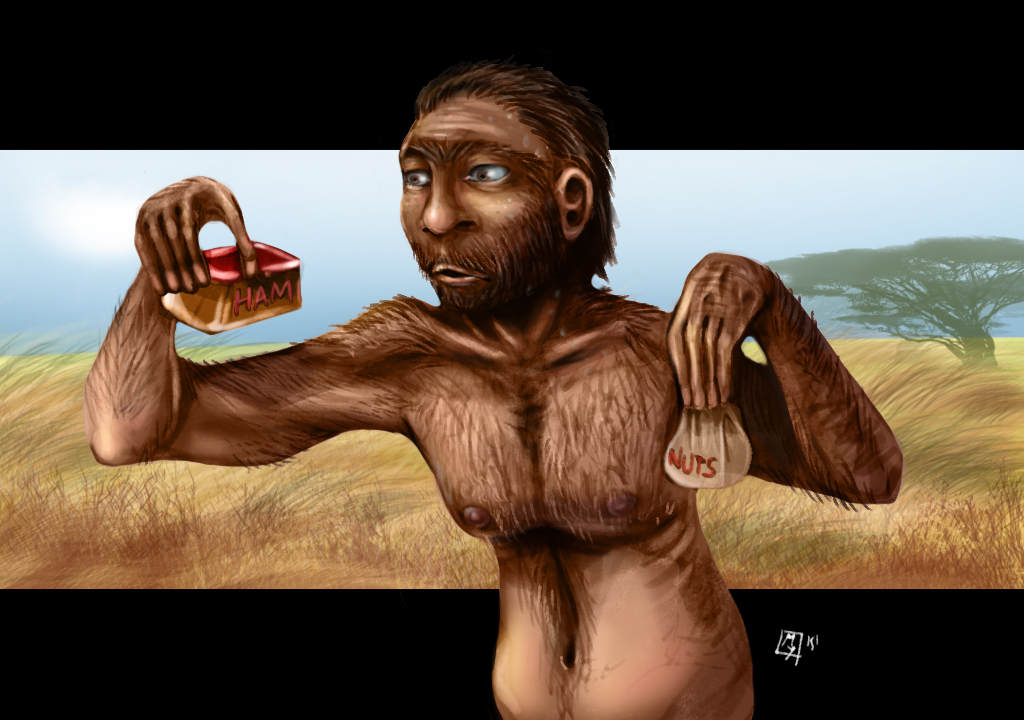 With my guidelines in mind, I wandered through Crossroads in search of a lunch that fit the bill. Aside from basic ingredients meant for cooking, almost no foods met the surprisingly strict criteria set by the Paleo Diet. It was hard enough to find something to eat that was free of dairy or grains, let alone unprocessed. Unless I ran outside and bashed a squirrel to death with my laptop, I wasn’t going to find any free-range meat.

I had to settle on a plastic container of sliced ham and a shockingly expensive bag of nuts. As I sat down to eat my lunch, I realized that I had forgot to get silverware. I chose to view this as an opportunity to get further in touch with my primal ancestors.

Stuffing the deli meat into my mouth with my bare hands, I couldn’t help but question the long term sustainability of Paleo. The diet plan seemed tailored to a very specific audience. Paleo is based on having access to certain foods, the ability to prepare them and the financial stability to keep buying them; those traits aren’t shared by many college students, least of all me.

Maybe the Keto Diet would be more feasible. Short for ketogenic, the diet was originally created to control seizures in people with epilepsy. It has since been repurposed as a weight loss diet. The crux of the ketogenic diet is the process of ketosis, where the body begins to burn fat for fuel after being starved of carbohydrates. This allows meats, dairy and anything else high in fat and low in carbs. The keto diet is similar to the paleo diet in that they are both very low-carb, something that concerns McQuay.

“The main issue is that you’re eliminating a food group,” she said, pointing toward healthy carbohydrates, like high quality, unprocessed grains as a necessary source of fuel for the body. “They’re not looking at the whole picture.”

For a Keto friendly lunch, I got a stir fry without rice or sauce. For dinner, I got a cheeseburger with no bread. Although I still had to be cognizant of carbs, Keto was considerably easier to maintain than Paleo; most meals could fit the bill with some tweaking.

The issue with the diet comes down to the lack of carbs. The Keto websites assured me that low energy in the beginning of the diet is your body adjusting to its new energy source, and that I would emerge from my sluggish cocoon a low-carb fat-burning butterfly. All I knew is that I felt like shit. Maybe it was shortsighted of me, but I looked at the whole picture and listened to my body.

On the farthest edges of rationality comes The Five Bite Diet, created by Dr. Alan Lewis. The Five Bite Diet isn’t nearly as popular as Keto or Paleo, most likely as a result of how bat-shit insane it is. The diet is pretty self-explanatory: five bites of anything for lunch and dinner. It’s supposed to mimic the effects of a gastric-bypass for quick weight loss. This is truly a diet at its most stupidly simple.

Refreshed by the idea of a diet where you eat whatever you want, I ordered a salad for lunch. As I started to eat, I ran into the question of what constituted a bite. Was it how ever much I could fit on my fork in one go, or was it an entire mouthful? Regardless of the rules, I ended up with mostly uneaten salad. To the diet’s credit, I was eating less.

Later that day, I tested how far I could go with only five bites. After ordering a sizable panini, I finished the sandwich in five uncomfortably large bites. Dr. Lewis clearly underestimated the size of my mouth.

While the diet was simple enough to sustain for a day, very low-calorie diets can cause serious health issues when not medically supervised. Eating well can be hard, but it shouldn’t kill you.

When speaking to McQuay about alternative diets, she warned against accepting un-vetted junk science as nutritional fact.

“These days everyone’s a nutrition expert,” she said with some resignation.

With that in mind, I’ll refrain from making any sweeping statements about diets and nutrition. I will say that paying attention to what I was eating was eye opening. I would recommend that athletes, overweight writers and everyone in between take a serious look at what they eat.

Take that with a grain of salt. Or don’t. I’ve heard sodium’s bad for you.