Before you notice Radio Social’s retro decor and chic, well-lit bar, you the lively mingling of its patrons as they flit around the bowling alley’s spacious interior. And before you hear the characteristic crack that denotes the sacred meeting of ball and pin, you the happy din of a tipsy crowd. Though it only opened in the spring of 2017, Radio Social has quickly become something of a hotspot in the Rochester community. If you had to boil down what Radio Social is to just two words, they would be “bowling alley." But that’s not the whole picture.

While Radio Social was constructed as a successor to — and retains the same management as — the classic bowling alley Clover Lanes, there is quite the difference between the two establishments. While Clover Lanes was your everyday bowling alley, Radio Social has diversified into something more complex — and something that’s harder to easily summarize. Radio Social styles itself as a modern urban social club. While that might sound pretentious, it’s also kind of true.

This reinvention of what a bowling alley is reflects a larger cultural shift. The sport of bowling has existed in some form for millennia, originating in ancient Egypt. While always popular, the sport hit its peak in the U.S. during the mid 20th century. Bowling alleys were at one point an essential part of American leisure; a 1959 report by the American Society of Planning Officials described the bowling alley as “one of the most important — if not the most important — local centers of participant sport and recreation.”

Of course, bowling’s heyday has gone similar to the way playing pinball at the malt shop has. That makes it all the more surprising that Radio Social has made such an impact in such a short time frame. For Laura Stockman, a third year Graphic Design major, the appeal is the establishment’s particular atmosphere.

“It was cool there, very laid back and well lit which I appreciated,” Stockman said. “It’s not like going out to some of the other bars downtown where you get there and it was packed and the expectation is that you’re going to get trashed.”

This might be because of how Radio Social is structured. While bowling, alcohol, food and music are all features, they seem secondary to the main goal: hanging out with other people. 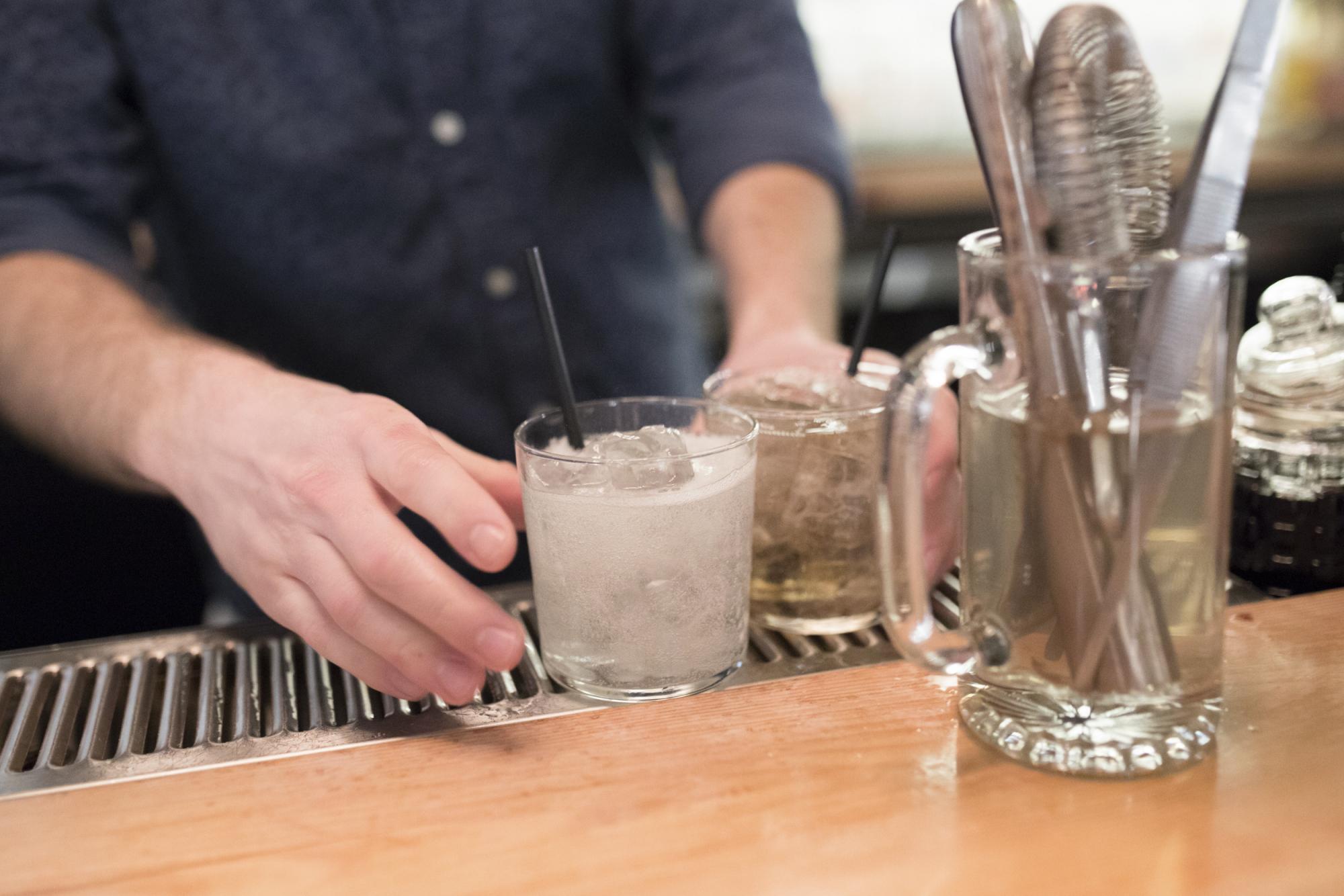 Radio Social’s menu is perhaps one of its most surprising aspects. When you picture bowling alley food, you might picture pizza, fries and buckets of grease. You certainly don’t expect upscale Mediterranean cuisine, but Radio Social isn’t just another bowling alley. The menu is presided over by head chef Steven Eakens, a Rochester native whose resume includes a stint on the television show "Chopped." The menu features multiple variations of hummus and entrees like Spanish Octopus and Smoked Lamb Ribs.

The drink selection also comes with surprises. While you can still get a cheap beer to accompany your strikes, Radio Social has a surprisingly well-rounded selection of wine and cocktails, many with a distinct Mediterranean vibe. I don’t know what kind of a person sips Arak between rounds of bowling, but whoever he may be, Radio Social caters to his needs.

Of course, bowling remains the star of the show. Radio Social’s bowling lanes are exquisitely decorated and the seats are extremely comfortable. But most importantly, the balls roll down the lanes and hit pins, which is all you can really ask for. If bowling isn’t your jam, there are plenty of other games to keep you busy. With pool tables, ping pong tables and even giant Jenga, Radio Social is aggressively committed to giving its guests a good time one way or another.

Naturally, this all comes with a big red asterisk: Radio Social isn’t a particularly cheap hangout. Reserving a lane ($30), grabbing a couple of cocktails ($10 each) and a dinner for two (entrees range from $16 to $29) can add up to a pricey night — especially on a college student’s budget.

“Even though I want to go back, I definitely can’t afford it,” Stockman said.

While Radio Social can be a fun experience, part of bowling’s appeal is its affordability.

“I used to go bowling every week freshman year at that seedy place on Jefferson because it was cheap and something fun to do,” Stockman said.

And while the founders of Radio Social deliberately located the establishment in the city of Rochester, having such an expensive place in a city with a median household income of $30,784 is troubling. Urban revitalization is a great goal, but is it really revitalization when large swaths of the city aren’t included? While it might be unrealistic given the operation costs of a business involved in food service, affordability remains Radio Social’s one major shortcoming.

Beyond the tastefully designed interior and bold — if pricey — cuisine, there is an undeniable energy to the place.