Movie Review: "The Shape of Water"

This year’s Academy Award for Best Picture went to “The Shape of Water.” Directed by Guillermo del Toro, the film also won the awards for Production Design, Original Score and Best Director. Clearly, they did something right. It seems like every time the Oscars roll around, the general public hasn’t even heard of most of the nominated films. When “The Shape of Water” won Best Picture, I figured I’d give it a try to see what it was all about.

“The Shape of Water” is set in Baltimore in the Cold War era. Elisa Esposito, played by Sally Hawkins, is a mute custodian at a lab where researchers are examining a humanoid fish creature. While she cannot speak, Elisa uses American Sign Language to teach the creature some signs and over time develops a bond with it.

When she hears that the creature will be killed by the scientists, Elisa schemes a plan. With the help of her co-worker Zelda, her neighbor Giles and a Soviet spy, she successfully brings the creature to her apartment. They plan to release it into the canal with the next rainfall. During the time Elisa keeps the creature in her home, she and Giles find that it is aggressive but also has special powers. Despite its unusual characteristics, Elisa ultimately falls deeply in love with the human-fish thing.

However, back at the lab the man in charge of the research project becomes frustrated about having "lost" the creature. In the end, he will stop at nothing to get the creature back.

This movie was a whirlwind of craziness, but I can definitely see how some people call it “art.” In reality, the story is very simple: a girl falls in love with a creature and decides to protect it at all costs. But there were so many other elements that at times it was difficult to understand what exactly the movie was trying to convey to its viewers.

Probably the most important subplot was the tension between the Soviets and the Americans. The researchers took such great interest in the creature because they wanted to exploit it for use in the Space Race. By dissecting it, either party would have an advantage over the other because they would have greater understanding of this humanoid creature which they believed could potentially have the ability to withstand space travel. 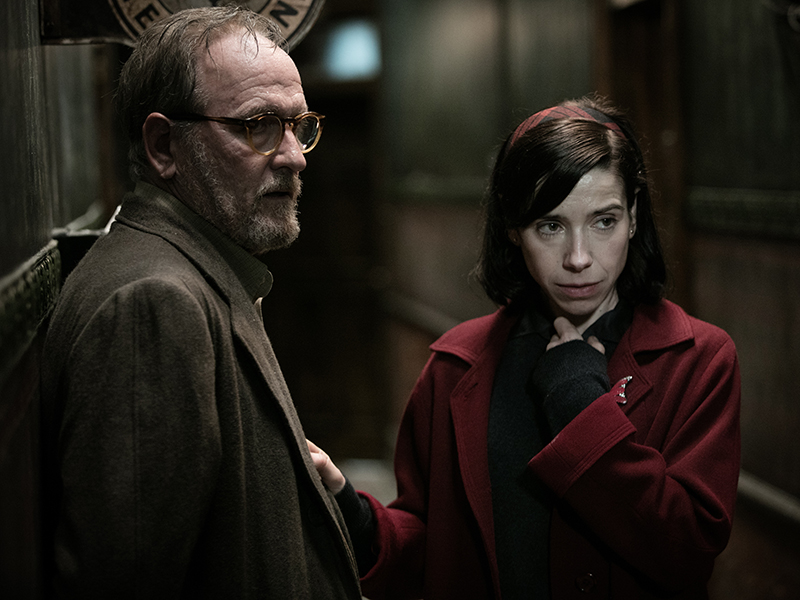 However, some parts of the story were just distracting. One example is Elisa’s neighbor, Giles, a closeted gay man in his 50s. He and Elisa are best friends until he decides he wants to focus more on flirting with a man who works at a pie shop. When he finds out the man is not gay, he comes running back to Elisa to repair their friendship. In the end, the movie ultimately offers no conclusion on Giles' search for love. He basically spent his entire life denying he was gay, tries one time to make a move on another man, then gives up. Why the writer wanted Giles' love life to be such a big part of the movie if there was no resolution, is lost on me.

Another significant yet perplexing part of the film is the character development of the man in charge of the research project. Over time, he becomes more stressed and eventually angry about not being able to locate the creature. However, his character arc never progresses beyond that of an angry man. Perhaps he is just supposed to represent toxic masculinity. Regardless of the true meaning of his character, I didn't see how his progressively more violent actions were tied into the love story.

Don’t even get me started on the creature. I can’t fathom for the life of me why the writers wanted the creature to have special powers, other than to detract from the reality they so meticulously attempted for the rest of the story. Also, both Giles and Elisa see that the creature is aggressive after a particularly gruesome scene. However, both of them act completely unalarmed. Instead, Elisa chooses to be unafraid and even locks herself in her bathroom with the creature to have sex with it. She is either fearless, or just plain stupid.

Overall, the developments of the secondary characters in this movie were relatable and significant to the time period in which it was set. At times however, they distracted from the main story. This film is strictly a love story when you strip away all the excess plot lines. With all the fluff and extra characters added, it is more of a jumbled mess.

While many elements of “The Shape of Water” were lost on me, it is clear why it won Best Picture. There are so many subplots and unique parts of this film that just about every based was covered. Overall this movie was definitely an adventure and there's something for everyone, so I recommend giving it a try. See it for yourself; you might finds it hits all the right notes for you.