Battle of the Bars

I'll preface this by admitting that I have very little experience at bars; they're not really my thing. This might be because I have yet to find one in which I feel comfortable, or it may be because of my inexperience. Stepping outside my comfort zone, I decided to spend a free Friday night checking out three popular Rochester bars: Lux Lounge, The Angry Goat Pub and Bug Jar. I preferred the relaxed atmosphere of The Angry Goat, but others may like the dark ambience of Lux Lounge or the indie music vibe of Bug Jar. I'll relate my experiences here and maybe you'll decide that one of these locations will be yours.

Lux is ... weird. It's a place that's hard to define. The bar was pretty crowded with people of all ages and it took a few minutes to get service. My boyfriend (who I dragged into this) and I arrived a little before 10p.m. There was live music, but the blues band, Steve Grills and the Roadmasters, were about half an hour late, arriving around the same time as us.

The blues music provided a nice ambience. The bar also featured a backyard with a fire pit and a pool table. 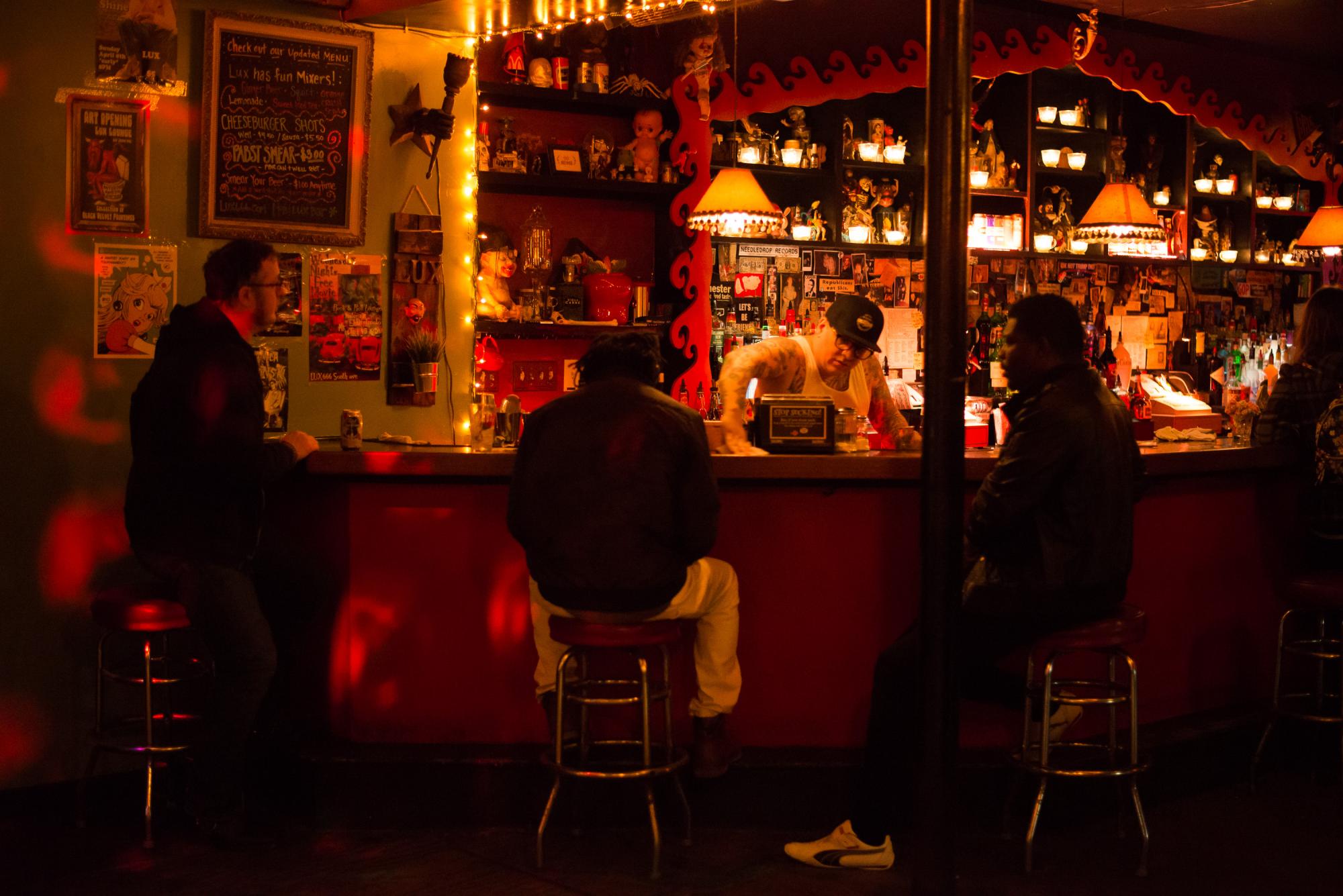 There was a $5 cover charge the night we went, and the drinks were very reasonably priced. Most beers were under $4 and cocktails were about $7. The beers on tap were mostly local staples, like Gennies. Lux does not put straws in their drinks; instead, they provide the eco-friendly option of paper straws from a dispenser.

However, as an inexperienced bar-goer, I never know what to order so I prefer an easily accessible drink menu. I had to ask for one, but it was outdated. As someone who is not at all a beer person, I ordered the "Crapple" cocktail, containing sweet tea vodka and peach Shnapps.

Other cocktails had cheerful names such as "Jersey Whore" and "Punch in the Junk." Although I wasn't brave enough to try it, I was particularly intrigued by the "Cheeseburger Shot," which is apparently chased with tomato and pickle juice.

At larger events, the bathroom line may become long as there were only two toilets (one male, one female). They are reasonably clean, and have walls covered in blackboard paint, with chalk available. This provides a space for philosphic ponderings such as "the world is a vampire."

We were happy to discover that there was no cover charge for this bar. The soft blue color scheme was a welcome relief from the dark red of Lux. The bar was not crowded at all. While there were only a few tables, they weren't in use so we grabbed one.

The drinks were more expensive than at Lux, with cocktails averaging around $8 and beers running from $5 to $9. The on-tap offerings were from lesser known breweries, offering opportunities for people who like to try new beers instead of sticking to the same old drinks.

We ordered a basket of fries and a Blue Toad Paddy Green Cider, which — from my limited experience with ciders — was pretty good. A drinks list was readily available, which helped me evade talking to people more than necessary, which is always nice. Although I didn't order one (this night was already getting expensive), the signature cocktails looked tasty and unique.

The pub offered a variety of board and card games as well as a full menu. We munched on the hot crispy fries as we played some rounds of Guess Who.

It was a mellow, relaxing part of our night and we both appreciated the downtime. The decor was classy and the bathrooms were clean. The bar was a decent size and it was easy to get service. The entire atmosphere was a far cry from our next stop, Bug Jar.

Bug Jar is a well-known Rochester spot for indie bands. The night we went there were four bands playing and the cover was $7. We caught the tail end of The Shine's performance and stayed for Bugg. The bands had attracted a punk/grunge-type scene, which is not really my crowd but I attempted to blend in with a sweet faux-leather jacket.

The music was in the back room, which was pretty small so the crowd was packed in. My boyfriend and I are big nerds so we brought earplugs, for which our hearing thanked us. The music was fun, and the room was interesting. Looking up, there appeared to be furniture on the ceiling creating the appearance of an upside down room. 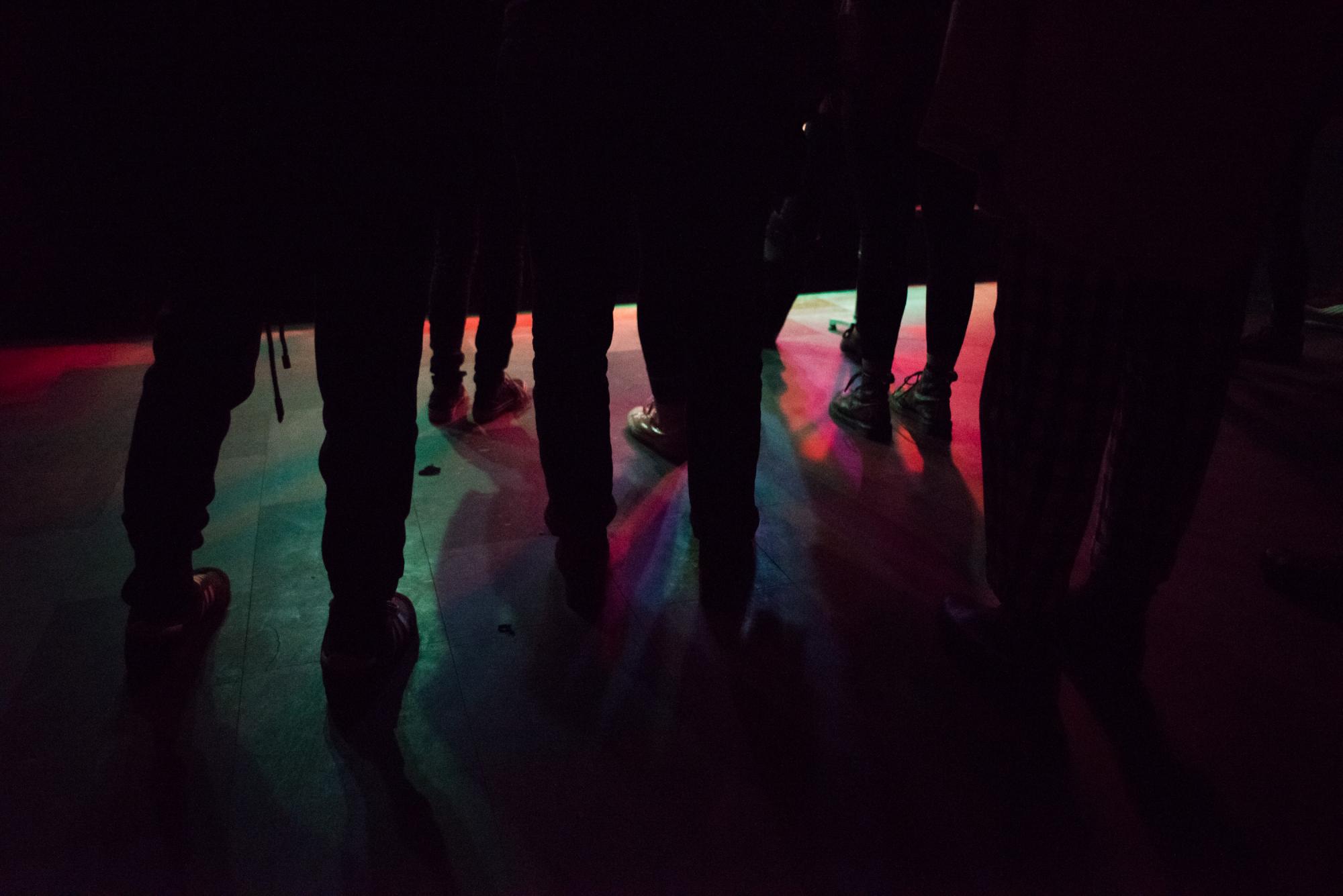 There were a lot of interesting characters attending the concert. These included ladies in their forties grinding like they were high school prom-goers, three men standing against a wall and nodding in unison and a guy in a crowded space who needed three square feet of room for what I can only kind of describe as dancing.

Later the aggressive "dancer" came up to me while my boyfriend had stepped away. It was pretty clear he was drunk and possibly high on something. He asked me if I had ever played pool and if I would like to play with him. I kindly declined, stating that I was leaving soon.

I'm not really sure what the point of the interaction was, but I suppose talking to random people at a bar is all a part of the experience.

There was no drink list readily available and the bar was too busy for me to ask for one. There was a decent selection of beers on tap, but I opted for a typical mixed drink. I heard someone ask for a whiskey sour, so I went with that. They were out of cherries, so I got a shot of grenadine syrup, which I appreciated.

The drinks were more expensive than Lux, but less pricey than The Angry Goat.

If I learned anything from this experience, it's that there's a bar for everyone in Rochester, from freak to punk to mellow. I preferred the relaxed atmosphere of The Angry Goat Pub, but that's just me. Even if you're not a bar person, I suggest going out and trying a few; you might just find the one for you.