What makes music so great is how it can help us gain new perspectives, tug at our heartstrings or just make us feel a little bit happier. A perfect way to connect more to music is to see live performances.

RIT has a thriving music community with creative and energetic artists, so there’s no need to go off campus to see a great show in Rochester. It always helps to know a little about a band before you see them live, so here’s a quick rundown of some of the major bands you’ll see on the RIT scene.

The band formed in October 2018 after Benson made a post on the accepted students Facebook page looking for people to jam with. Silva took him up on the offer and they both went to the RIT Student Music Association (RITSMA), where they met McKee. Sometime later, they met Gambino at an open mic and the band was fully formed.

They also say to have been influenced by groups like Vulfpeck, Joywave, The Saplings and Arctic Monkeys. In addition, they have been trying to make bass more important in their band, as they feel it’s often overlooked compared to the other instruments.

“Our rhythm section should be doing more than rhythm,” Gambino said.

The band practices every Friday and usually every other Tuesday at RITSMA jam sessions. They try to perform every Saturday, playing open mic shows at places like Beanz and Java Wally’s. They are releasing an EP of original music on all streaming platforms by the end of the semester. If you want updates, you can follow them here: @soulhumanjams.

The three started jamming with each other around August 2018 after McMullan and Pack became roommates. They later asked McKee to join. The band draws influences from groups like Phish, The Grateful Dead, The Beatles and The Strokes.

“I’d say alternative/jam rock, whatever you want to call it,” McMullan said, describing their style.

They practice about once a week on Fridays, but play more if they know they have an important show coming up. The band doesn’t play gigs that much, preferring to stick to jamming in their basement and doing open mic shows once in a while. If you want to hear their music or see them live, the band encourages contacting them personally.

“Email us. We’ve just recorded stuff on our phones. We don’t really release music or anything, we just jam,” said McMullan.

The band can be contacted at rjm9818@rit.edu. 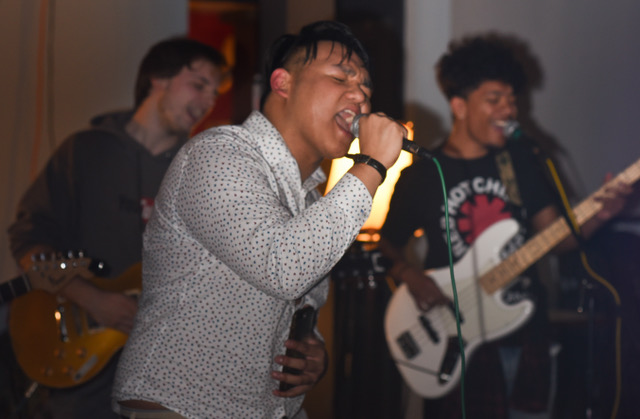 The band, previously known as Epilepsy Cat, became fully formed and known as Cigs Inside around the beginning of the 2018 Fall semester. Adil and McCallum met each other while attending the same boarding school, then becoming roommates at RIT. They later met Bond and Bedassie through Jam Club, and Bedassie introduced the group to Hacker.

Bedassie added, "Every song that we have kind of has a different genre to it. It’s kind of hard to nail us down to one thing.”

Cigs Inside normally practices two times a week in Colony Manor. The band said they get noise complaints often, but one time a public safety officer came just to listen to their music. They try to gig anywhere they can, on or off campus. They’ve played at The Bugjar, Firehouse Saloon, Vineyard Community Space and various parties on campus.

They’re influenced by bands like Red Hot Chili Peppers, Incubus, The Strokes, Neil Young and Cage The Elephant. If you want to listen to their music, you can find them on any music streaming platform and on their Instagram @cigsinsidetheband.

The band has been together for a year and half and the members met each other through a friend before they bonded over their love for Metallica. The band practices about twice a month but doesn’t play on campus much since most of the members have graduated. When they do play on campus, however, it's usually at Battle of the Bands.

To students interested in music, Saber said, "If you have that love for the music so that it's not a chore to practice, start a band."

Thrash Inc mainly plays Metallica and other metal band covers. They don’t currently have an Instagram, but will be making one soon, so be on the lookout.

While RIT might be a technical school, there are plenty of artful students who play live music on campus. Go out and support these local bands, or maybe even start a band of your own. Hacker, the drummer for Cigs Inside, had some advice for people thinking about starting a band.

“Just do it. Get together and go for it, and just know that you’re going to suck for a while. Don’t expect to make your first song perfect, because you’re going to fail a lot. Be prepared to fail.”

Overall, RIT has a thriving music scene. So go out, see some music and have fun. Just try not to break a bone in the pit.