“Shades of the Forgotten”: a Night to Remember

The Vignelli Center isn’t usually a classroom. With rows of black chairs and an aisle down the center, the expectation was simply of what the flyers had described: a fashion show. It was difficult to miss the flyers as they dotted the ivory walls of the SAU from Artesano’s down to the Student Government office. Wherever there were empty walls, word of mouth must have filled in becausethe room was packed. A few chairs were empty solely because some attendees chose to stand.

In wool leggings and worn out sneakers, my attire was — to say the least — an outlier. Those seated around and across the aisle from me were dressed in fine jewelry, crisp suits and vibrant floor-length dresses. Embarrassment would have killed me if the atmosphere of the room wasn’t so life-giving. Afrobeats boomed from tall speakers standing at the back of the hall on either side of DJ Griffiths, a University of Rochester alumnus. Reggae and hip-hop would be thrown into the mix now and again, shifting the mood of the crowd ever so lightly. 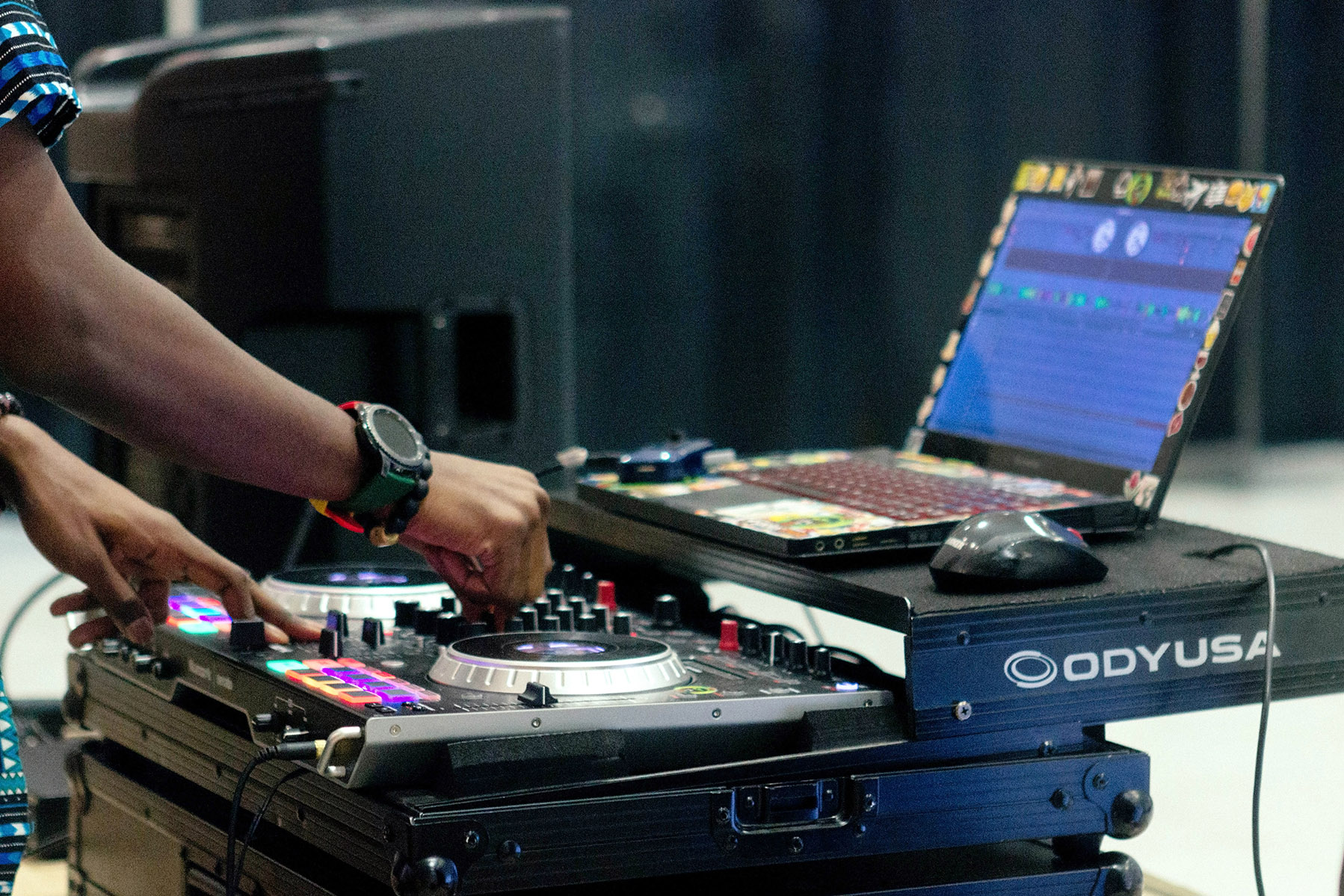 At about 7:30 p.m., the DJ took a backseat to the event’s opening act: RIT African Percussion Ensemble. The four students, dressed in African-inspired wear, drummed rhythmically with passionate hands. Deep booms echoed out over the quiet audience. When the act ended, the group cleared the floor for second year Electrical Engineering major Damola Anifowose. He announced himself as the president of the Organization of African Students (OAS), the club that sponsored, planned and organized “Shades of the Forgotten.”

“OAS is a club whose sole purpose is to create awareness of African cultures on campus and also in the Rochester community,” said Omiponle. “You get to talk to people, you get to hang out with people while also hopefully learning something about Africans and our culture.”

Hanging out and learning — that’s what it felt like. As classy as the audience was dressed, there was an undeniable air of hominess. Perhaps the comfort I felt was from the brotherly banter between the event’s two hosts. Sixth year Computer Science major Emmanuel Olaojo and Sustainable Engineering master’s student Ishmael Akahoho were comedic in a sense that made you shake your head, but laugh anyway. It’s unlikely that any other pair could’ve volleyed off one another with such ease and charming authenticity.

“Emmanuel and I got together and talked about some things that we’d like for the audience to know and kind of address some stereotypes too,” said Akahoho. “That’s why he mentioned bringing a boat all the way from Africa to get here, you know ... Just try to find a way to connect with the audience, so we went over different skits.”

After the hosts introduced themselves, they welcomed Ma’Frisah to the stage, a University of Rochester dance crew. The all-female group danced in coordinated African-inspired clothing to upbeat music, switching out dancers whenever the beat changed.

Then came the moment we were waiting for: students modeled down the aisle wearing designs by Dr. Reverend Bokwey Burnley, a pastor and philanthropist. President of Peace and Justice for Africa, Burnley not only supported the event by allowing OAS to showcase her designs for the night, but she was also the inspiration behind the club’s choice to donate to an African organization. Each “Shades of the Forgotten” ticket sold was a small donation to help purchase school supplies for disabled African students. 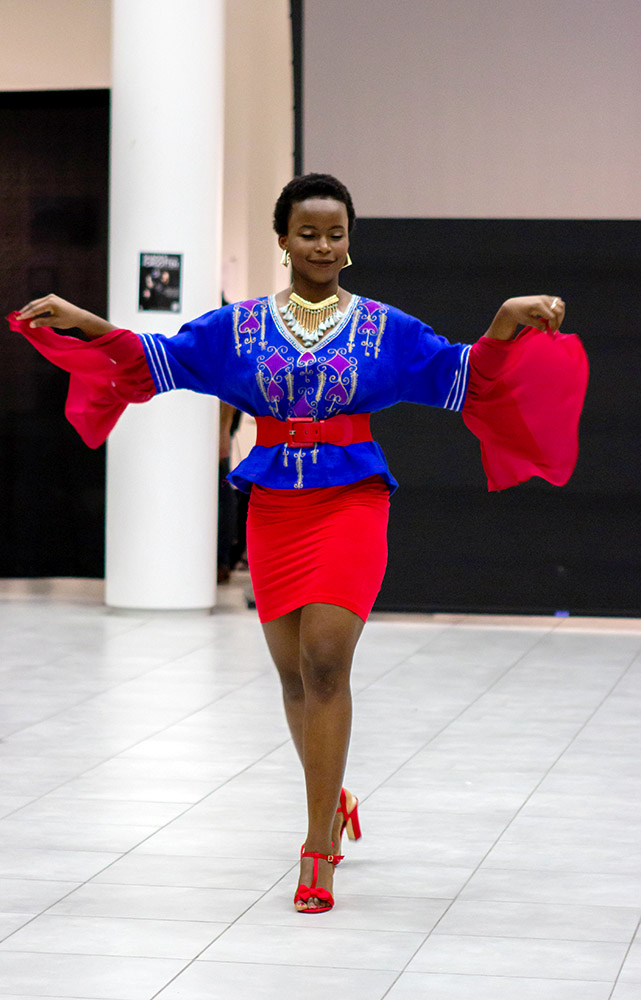 “What’s the point if we’re not giving back to Africa, right?” said Omiponle.

Giving back, as Omiponle pointed out, was more than just monetary donations. Funding is important, but raising awareness about direct ways to help those who are disadvantaged is the fuel necessary to spark change. OAS highlighting this new organization creates opportunities for it to grow through new volunteers.

In a similar way, having diversity on a college campus is important. However, raising awareness about the diversity of cultures within the student body is how change starts. Before attending “Shades of the Forgotten,” I never realized that there was such rich African culture — and so many African people ­— on RIT’s campus. I must also admit that I knew little to nothing about African culture in the first place. “Shades of the Forgotten” acted as a showcase that allowed both African students to celebrate their heritage and outsiders to develop an understanding of people unlike themselves.

“I wanted [the audience] to leave saying 'Wow, that’s African culture!' Because I don’t feel like that’s necessarily represented as much in the ALANA group. So, I feel like this was the one event that would kind of get that across,” said third year New Media Design major Kimberly Abakah, assistant coordinator of the event. 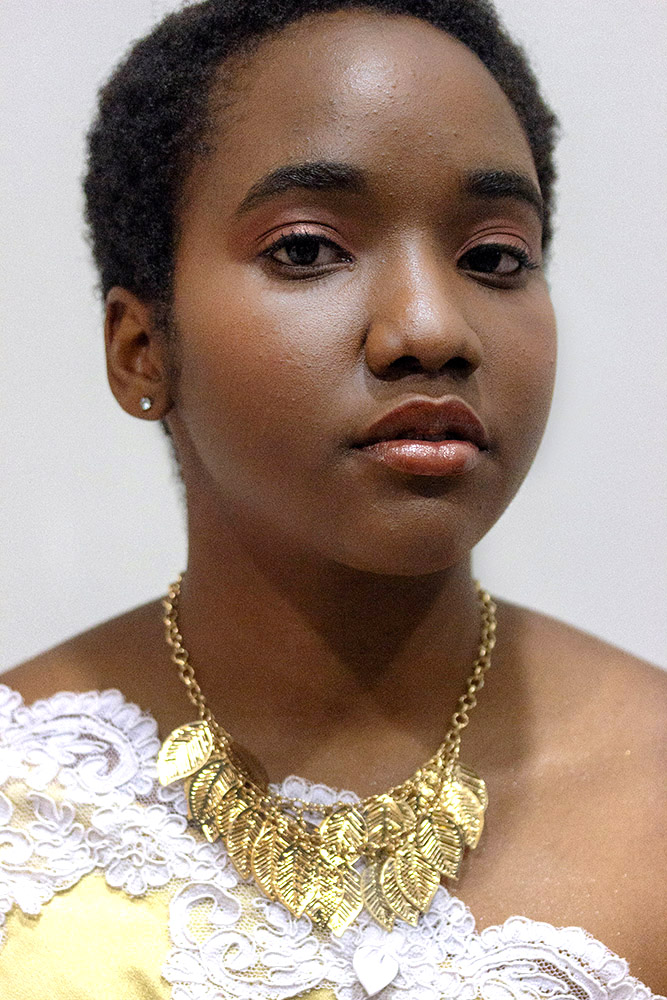 Tiffany-Louisa Ibok poses for a portrait.

Well-rounded representation isn’t easy to achieve, but OAS managed to do so quite well. The showcase included musical acts of all kinds. Along with a full-time DJ, African Percussion Ensemble and Ma’Frisah, the event also featured RIT band “The Roar’s” who performed traditional African songs and a fun cover of Pharrell’s “Happy.”

Gratefully, the event also showcased cultural foods. Halfway through the night’s event, the hosts invited audience members to join them outside the university gallery for free samplings of African cuisine. With the help of political science professor Dr. Edward Kannyo, the audience even gained a better understanding of the current political state of Africa. As keynote speaker, Kannyo discussed how the continent has been molded economically and socially by globalization. He then finished with a strong message: African youth are the key to creating change in their homeland.

Of course, OAS themselves performed during the night. Through dance and acting, the club’s members portrayed the historical timeline and emotional burden of the African slave trade of the 16th and 17th centuries, highlighting the connectedness of people from Brazil to the Caribbean.

Sprinkled between these performances were runway shows of originally designed African-inspired fashion. All the clothing was modeled by OAS members. The designs showcased on the runway were by Merrytime Ebhohon of N’omose Couture, MJ and Duwayne, House of Teebee’s by Augustine Omiyi, Sarah Ekube and even a few RIT students.

The Vignelli Center isn’t usually a classroom, but learning history and politics and social norms happened so seamlessly throughout the night that it may as well have been one. OAS combined education and entertainment with a kind of passion that was awe-inspiring. Pulling off an event this ambitious takes tireless work, yet humbly begins with a conversation.

“I was talking to Peace last semester and I was asking her 'Are we going to do this again this year?' Because I feel like it’s something that needs to happen. It’s OAS’s signature event,” said Abakah.

The planning process began in February with three committees and continued up to a week before the event. Though there were specified groups in charge of financial decisions, advertising and event planning, constant communication with all the club’s members ensured that everyone got a say in how the event would proceed. Omiponle admitted that at times, this planning style felt complicated — too many chefs in the kitchen. However, having all hands on deck aligned with the OAS value of family meant that there was always someone who could help when a situation arose. Clearly, having an open decision-making process bettered the overall event. Older OAS members admit to seeing immense growth over time.

“[During] my undergrad, I was the president of the organization. So, I’ve planned and hosted the event before. Just to see the new students, the new generation, taking over and provide such a wonderful event, it was just — I just felt emotional, you know?” said Akahoho. “I think this was one of the best fashion shows that we’ve had.”

By the end of the night, it was clear that what Kannyo said was true. African youth are the key to creating change. OAS changed people that night — including me — and in that way, Africa will always be remembered.