Walking Along the Quarter Mile 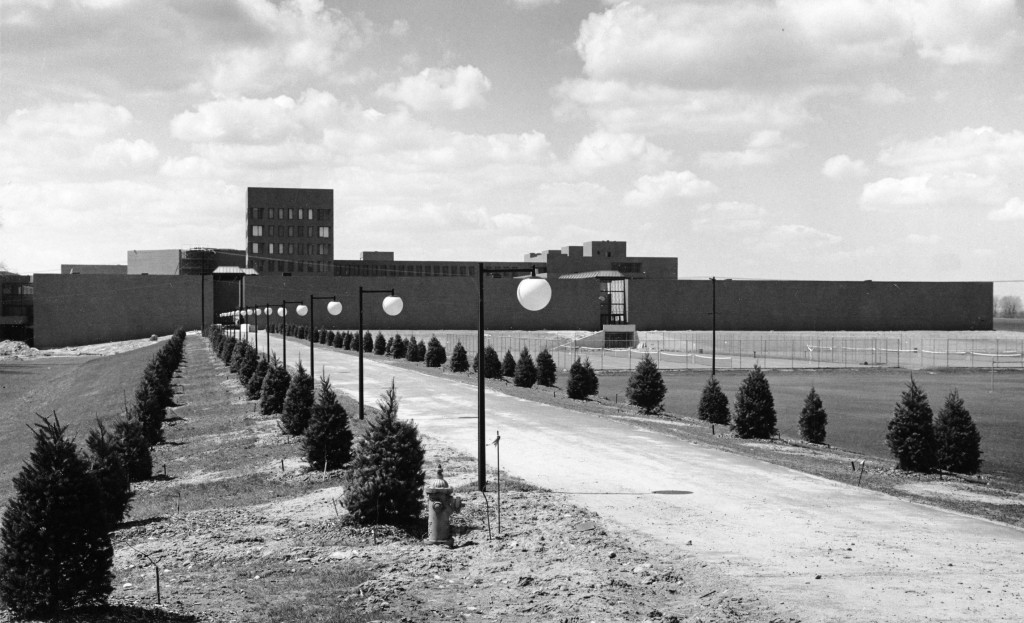 1968: Stepping out of the dorm building into the blistering cold, even three layers of jackets and four layers of socks is not enough to protect you. And it only gets worse as you see the end of the dorm side and the beginning of the long asphalt path ahead.

There is no bridge, no legacy walk, no brick or any other type of paving. Asphalt was less expensive and easier to maintain. Once more bricks started being added to the long path decades later, students appreciated the change in aesthetic. In 2004, there was even suggestion of extending this type of brick work along the remainder of the path to dorm side.

But in 1968, the quarter mile was still a barren path. Without the Gordon Field House, the Hale Andrews Student Life Center and the August Center there was nothing to block the wind other than thin layers of short, newly planted spruce trees and slender light poles. With nothing but expanses of athletic fields and tennis courts on one side of the path and the forest on the other, the winter winds were brutal along the quarter mile journey to the nearest wind blocking structures at the time: the George H. Clark Gymnasium and the Edith Woodward Swimming Pool directly across from it. 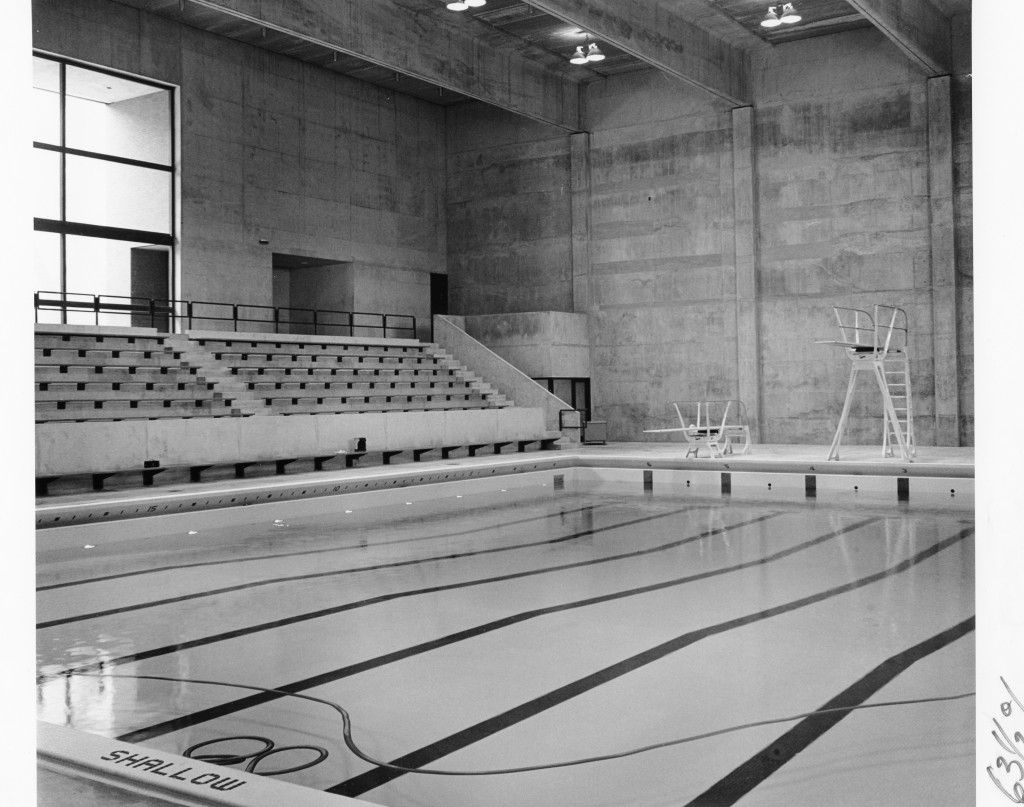 The Edith Woodward Swimming Pool used to be the home to RIT’s Swim Team, the Tiger Sharks. Walking in, you quickly reached the cascading steps of bleachers. Now, walking into the same building, the bleachers are still in sight in the form of a tiled fountain surrounded by millions of dollars worth of changes.

The Campus Center, now home to the Student Government office, the Welcome Center, the Reading Room, the Bamboo Room, the Center for Women and Gender, the Major Student Organization offices, and most notoriously, the free gumball machine, has taken the place of this pool literally sitting atop what used to be this large hole in the ground. The pool was filled in and then two more floors were added and filled with club offices, meeting spaces, lounges, and whatever else the planning committee believed was necessary in order to create a new hub of student life.

When the campus was first created, the Student Alumni Union was meant to serve this function, but as the school and the student population expanded, administration discovered that this space was not enough. Once the Aquatics and Activities Center was added to the Gordon Field House in 2004, the Woodward Swimming Pool emptied and by 2008, renovation efforts began. By 2010, the construction on the Campus Center was complete and the newly renovated building was open to the public. The only sign of what the building once was are the bleachers underneath their tile coating and the water that runs over them; a tribute to what the building once was and the water that used to fill a lot more of it. 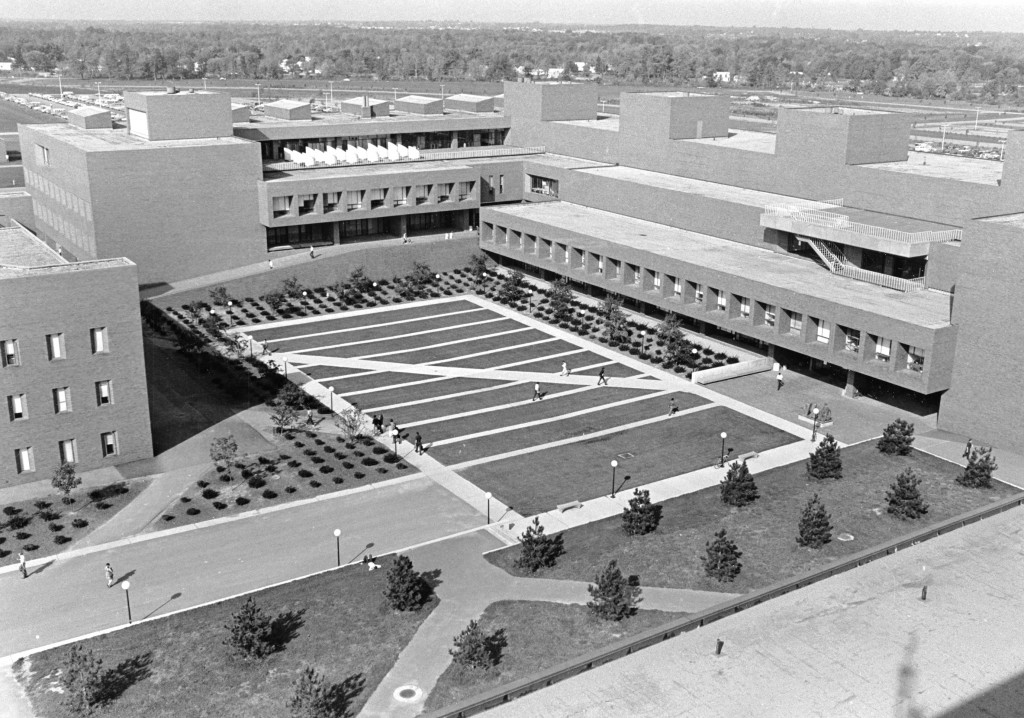 When RIT first opened, it was a brutalist’s paradise. Filled with strong angular structures and in the Gannett Quadrangle, even the grass was arranged with sharp edges and shrubbery in even rows and columns.  The Kodak Quad was non-existent. No grand staircase or decorative archway. No benches. No curves. Just lines of concrete, shrubs, asphalt and grass.

In 2003, all this began to change. A few years beforehand, campus beautification and student centered design started to gain a stronger focus. Before construction of the changes to the quadrangle even commenced, the flow of pedestrians was carefully studied. The observations were used to determine the optimum layout and width of the future pathways. Curvilinear walls and shapes were constructed. Grass and matured trees were planted. Benches designed by members of RIT’s art department were placed. Lighting was improved. All of these changes made specifically to encourage student use of the space. Now, every time there is beautiful sunny weather, seeing students lining the walls and the grass, it is apparent that this encouragement worked.

A few months after these student focused changes were completed, the quadrangle was renamed the Eastman Kodak Quad in tribute to the century long relationship between RIT and the Kodak company. The newly constructed staircase and arch baring the new name of the area served as a permanent reminder of this historical connection.

Over the past 45 years on the Henrietta, RIT’s campus has changed dramatically along with the students and the industries it represents. By looking at the campus in its original form, we can see what changes occurred both outside of RIT and within the focus of the college as well.