The Stresses of Dorm Life

Students in living in Photo House work on homework on Sept. 16, 2018. Photo by Jesse Wolfe

To the chagrin of many freshmen, most universities — RIT included — require first-year students to live on campus, in residence halls or dormitories. Dorm life has become a quintessential part of the “college experience,” and its benefits are often touted; strong, lasting friendships, a sense of college community and an environment set up for learning. Dorms are so beneficial that they are even becoming an option for young professionals seeking to avoid high rents post-graduation.

But are dorms really all that beneficial for first-year college students? The jury is still out — for every study confirming the benefits of dorms, there’s another debunking them.

But are dorms really all that beneficial for first-year college students? The jury is still out.

For example, one 2006 study from Arizona State University found that freshmen living on campus had higher GPAs than those living off campus — supporting the idea that on-campus living sets students up for academic success. This is likely because on-campus academic resources are more accessible and because students living on campus don’t have to spend time commuting or trekking to and from the parking lot half a mile away.

Living on campus could increase students’ GPAs by about half a letter grade, according to a 2010 study of Indiana University-Purdue University Indianapolis. But another 2010 study from Rice University criticized previous studies for ignoring the impact of race and socioeconomic factors and found that the GPA-boosting effects disappeared when a broad range of universities were studied. This study also posited that the greater accessibility of academic resources to on-campus students is negated by the distracting social aspect of on-campus living, resulting in a net negative effect on students' grades. For example, few students have the willpower to go to the library when they could be hanging out with friends instead.

However distracting the social aspect of on-campus living may be, it is one of the most important, and often the most rewarding, aspects of dorm life. Having a sense of belonging to some sort of community is important for both mental and physical health, and the community facilitated by dorms is no different. 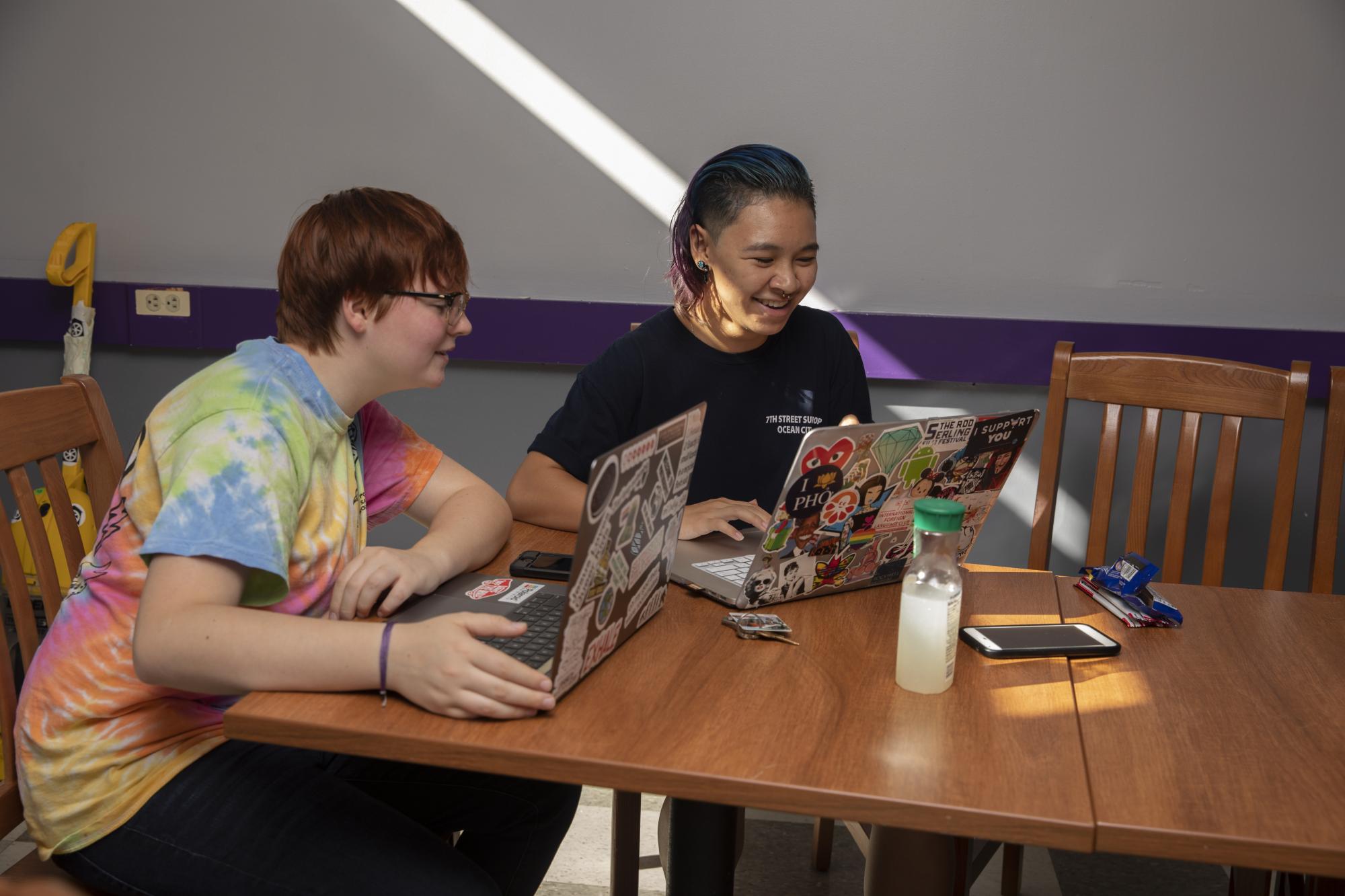 “It was just a nice space to be able to go to after a long day of classes and meetings,” fourth year Industrial Design major and former resident assistant (RA) Sumin Oh said of her first year dorm. “And it was always nice to have the floor to welcome you back, especially with my floor being a special interest house. People were always saying hi and greeting you ... always interested in how you’re doing.”

"I really liked the aspect of being social,” Ellis said. “That was a lot of fun for me. I like being surrounded by my friends all the time and I don't know what I would do without that now."

However, this sense of community can also prove to be overwhelming, especially for more introverted students or for students who highly value their privacy. Even extroverted students can find the hyper-social environment of dorm life grating after a while, especially because so many freshmen move into the dorms without ever having had the experience of having a roommate. This can put a strain on dorm residents’ newly developing communication skills and can lead to conflicts between roommates or floormates.

Gary Xu, a fifth year Electrical Mechanical Engineering Technology major and two-and-a-half-year dorm resident, agreed that a lack of privacy can lead to conflicts that are particularly difficult to solve.

"People need some privacy, right?" said Xu. "So in an environment like that, there's always someone next to you. Sometimes the best way to solve a conflict is just to walk away from it. Give it some time and it will just solve itself. In that environment, once it gets intense, there's no running away."

“In that environment, once it gets intense, there’s no running away.”

The more students living on one residence hall floor, the more difficult it can be for each resident to get some privacy, and the more likely it is that conflicts will arise. RIT has been criticized for overcrowding dorms as the student population rises by cramming three students into rooms meant for two, or turning lounges into makeshift bedrooms.

A 2015 PawPrints petition by Rory Glenn entitled “Stop Overbooking RIT Housing” stated, “Freshmen should come here feeling welcome, with a living space to call their own and enough room for them to maintain some level of independence. [They] deserve the chance at a college experience, but instead, they are being promised a space and then being packed in like sardines into unhealthy living conditions.”

Kevin Mejia, a fourth year Business Management and International and Global Studies double major and current RA, lived in a forced triple — a double room housing three students due to lack of space — his first semester.

“I’m not going to lie, because it was really complicated,” Mejia said. “Because it was such a small room for three people. It’s a small enough room for two people already, and then adding one more person on top of that is just too much ... That also led to us not being in the room, so I would never be in the room and I would not really be communicating with my roommates.”

"It’s a small room for two people enough already, and then adding one more person on top of that is just too much."

Living in a small, cramped space can be stressful. In fact, research has found that prolonged living in small spaces can increase rates of domestic violence and substance abuse. People need space — not only to sleep or store their belongings, but also to relax. But  can be hard to come by in dorms, particularly when lounges have been converted into rooms.

“The lounge used to be a space where residents could meet each other, introduce each other, talk about how their days were going and really become a floor community,” Oh said. “So having that lounge taken away really does become a problem.”

Without a lounge to serve as a place of relaxation, students often seek sanctuary in their rooms. However, many students find their rooms to be stressful — a physical representation of their bad roommate experiences, or far too similar to a jail cell in appearance with plain white cinderblock walls.

“Oh yeah, mine was definitely a jail cell,” said Mejia. “But I know now that people are able to cover or ... paint on their doors ... and it just makes you feel better, makes you feel more at home in a way.”

Some, however, view the sparse appearance of dorm rooms as more of an empty canvas.

“I like that it’s empty,” Oh said. “Part of an empty dorm room is that you have the freedom to decorate the way you want to. Which I think can be a little liberating.”

Despite the freedom students have to decorate, it’s no surprise that some have pointed to dorms as the cause of negative impact on students’ mental health issues, due in part to all of the stresses associated with living in such a cramped, hyper-social environment. The rate of mental health problems reported by college students has been skyrocketing in recent years: in the 1980s, approximately 10–15 percent of college students suffered from mental health problems; today it’s closer to 33–40 percent. 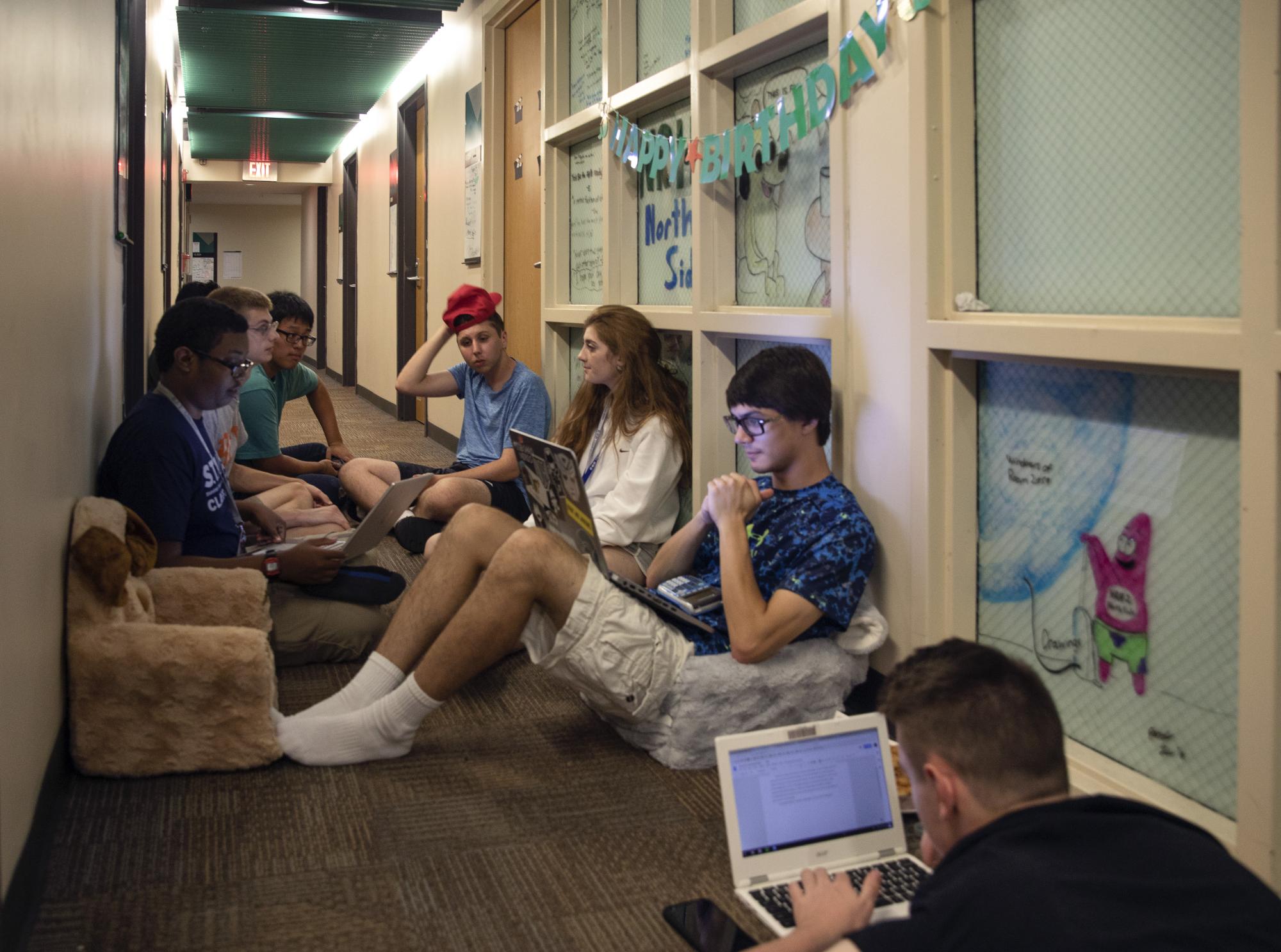 Feeling overwhelmed by the stresses of dorm life is completely natural. It can help to remember that this housing situation is temporary and that it can be an excellent learning experience. Most students come away from their dorm experience with strong, lasting friendships and better communication and conflict resolution skills.

“I tell all my friends, whether they’re RIT students or not, that living on campus, especially in a dorm, is an experience that you’re never going to have any other time in your life ...” Ellis advised. “So this is your one experience ... I think it’s definitely an experience that really helps you build relationships in your first year.”

“I tell all my friends, whether they’re RIT students or not, that living on campus, especially in a dorm, is an experience that you’re never going to have any other time in your life.”

Looking back on his first year, Mejia reflected that his experience in the dorms taught him about himself and about the importance of communication with his roommates.

“Yeah, I can’t deal with other people, I can’t live with other people,” Mejia said. “But now that I’m realizing it, if that were happening to me now, I’d be better fit to communicate and talk it out and come to some kind of resolution with them.”

“The key is to respect your roommates and get respected by your roommates,” said Xu, underscoring the importance of building good interpersonal skills.

Oh, too, agrees that living in dorms can be a great learning experience.

“I’ve met people where they said that being introverted and being on floor kind of challenged them to be more extroverted and talk to more people,” said Oh. “Which was a good self-development process.”

It can also help to reach out to someone — an RA is a great place to start.

“How do you talk about how you’re not doing okay? How do you help yourself so that you can make the most out of school resources? I think RAs are like a bridge to all the major resources on campus,” said Oh. “Because, as a freshman, you’re overwhelmed with all this information and you need to know how to grasp all of this ... It’s kind of nice to have a personal connection — an RA to tell you you could try this center or that center.”

The evidence that dorms are beneficial for improving students’ academics or for improving students’ mental health through a sense of strong community is dubious at best. But there’s no denying that dorm life has become entrenched in society’s idea of the ideal college experience — in part because no matter how terrible you may feel when arguing with your roommate or roommates about when lights-out is, or when feeling forced to wear flip-flops in the shower, or when searching desperately and in vain for somewhere, anywhere that you can get a little privacy — you’re going to come away from the experience a better person.