Being forced to buy an expensive meal plan can feel like highway robbery. Dining Services tries to meet their bottom line while still keeping students happy, but that doesn't mean they are always successful.

Reporter collected data from 104 students on meal plans at the end of Spring semester. The results may seem unsurprising, but we provide with insight from Dining Services and a disgruntled student. Participants in the survey were, on average, slightly unsatisfied with their meal plans. On a scale of 5, with 5 being very satisfied and 1 being very unsatisfied, the average was 2.84. Many participants also reported that food on campus was too expensive.

Stanley Goldstein, a fourth year Packaging Science major, has been on four different meal plans and understands why many people may feel less than pleased with their plan. During his freshman year on the 10+ plan (now called Tiger 10), Goldstein found that being forced to go to Gracie's for five meals was a strain on his schedule.

"It's really limiting your freedom of choice when it comes to your meals and with the amount of money we're spending here, that's kind of ridiculous," Goldstein said.

With limited hours and a tired selection of food, Gracie's is commonly joked about. Freshman meal plans require that a certain number of meals — ranging from 5 to 13 — are spent at Gracie's. If these meals aren't used within a week, they expire. This creates a problem for people with busy schedules that may not be able to make it to Gracie's while it's open.

Of the 64 respondents to the survey that had meals in their plans, 40.3 percent said that they did not use all of their meals almost every week. Kory Samuels, executive director of Dining Services, said that 82 to 83 percent of meals were used every week. This dissonance may be accounted for by the fact that the individuals were reporting overall usage, while Samuels' data looks at week-to-week usage. Each week, those 17 to 18 percent of people not using their entire meal plan have forfeited their money.

"You use it or you lose it," Samuels said. "Do we want that? No, we want people to spend their money."

Dining Services wants to ensure that students are eating enough, so they have meals expire. Some other schools provide bulk meal plans, where meals do not expire at the end of the week. These plans allow for more flexibility but may provide pitfalls for students without good budgeting habits.

"The block plan is kind of scary," said Dean Engdhal, associate director of Dining Services East. "If they don’t budget correctly ... you could have weeks where they have nothing left and so then you’re paying out of pocket for things.”

It wasn't long ago that a small percentage of leftover dining dollars would be rolled over between semesters. Now, students can rollover their entire balance from Fall to Spring. But at the end of Spring semester, that money is forfeited if left unspent. The Commons will host a "debit blowout," where expensive meals are made for students to run down their balances.

Every other week, Samuels' team calculates the difference between the amount of dining dollars students have and where they should be to track how well the meal plans are working out. If a student is behind on spending, they will send them an email to let them know. Dining Services reports an average of about $50 extra across all meal plans.

Some students wonder why they can't get their money back if they haven't spent it all, and that gets complicated. Taxes are not applied to food bought on a student meal plan in New York, but if that money were to be returned, taxes may need to be applied to all previous purchases. The other reason is that Dining Services has already spent that money.

Goldstein and other students may not see it that way.

Dining Services is out to make a profit. They are one of six auxiliary services on campus. These services, including Dining, Housing and on-campus stores, are tasked with providing additional funds for the school. According to the 2017 budget, RIT expects to make a profit of $5.29 million from auxiliary services. Between 2015 and 2016 the expected profit increased by over $52,000, but between 2016 and 2017 the expected profit jumped by $266,700. It's important to keep in mind that this is the total profit from all auxiliary services, not just Dining.

To determine the price of the baseline meal plan, the Tiger 10, Samuels first compiles meal plan data from RIT's benchmark schools. These schools are similar to RIT, and RIT uses them as a baseline for a variety of things. He looks at what meal plans cost at universities in the Northeast and of a similar size as RIT. This data, along with Samuels' recommendation, goes to the Office of Budget, then the President's Office and finally the Board of Trustees gives Dining Services a baseline price. When asked if student input had a part to play in the cost, Samuels had this to say:

"In terms of pricepoint? Not at all, no. I would say in terms of the way the meal plan is designed, yes."

The meal plan prices are decided based on other universities and what the Office of Budget needs, not necessarily what students actually need to eat. Goldstein, who ended up back in the dorms for his fourth year, says that he could survive easily on the Silver plan ($1000/semester) in dorms. These plans are only available for upperclassmen in the dorms if they live on a Greek floor. This means that these smaller plans are a viable option for upperclassmen, even responsible freshmen, in the dorms.

The Student Government Housing and Dining Committee has been charged with making these Greek plans available to other community floors in the dorms. Expensive meal plans can prevent upperclassmen from returning to Special Interest Houses and other community floors, even though they are often an integral part of the experience.

"By passing policies and not involving students in these decisions, you are causing harm to these communities and you are taking away one of the major things that makes RIT special and interesting."

"By passing these policies and by not involving students in these decisions, you are causing harm to these communities and you are taking away one of the major things that makes RIT special and interesting," said Marc Billow, chair of the Housing and Dining Committee and fourth year Networking and Systems Administration major.

Implementing this change would result in a loss of some income and bring up questions about what is "fair" for students. Currently, one third of Dining Service's revenue comes from meal plans. Two thirds of their revenue comes from people willingly spending their money on campus, which is interesting when it comes to students' opinions on the price of food.

On campus food is too expensive, said 80.6 percent of respondents to the survey. None of the 104 people said that the food was cheap. Comparing prices to Wegmans is unfair because grocery stores have much more purchasing power. The more of a product that is purchased, the less it costs per item. They look at similar stores to compare prices, like Fastrac or other convenience stores with similar purchasing power. 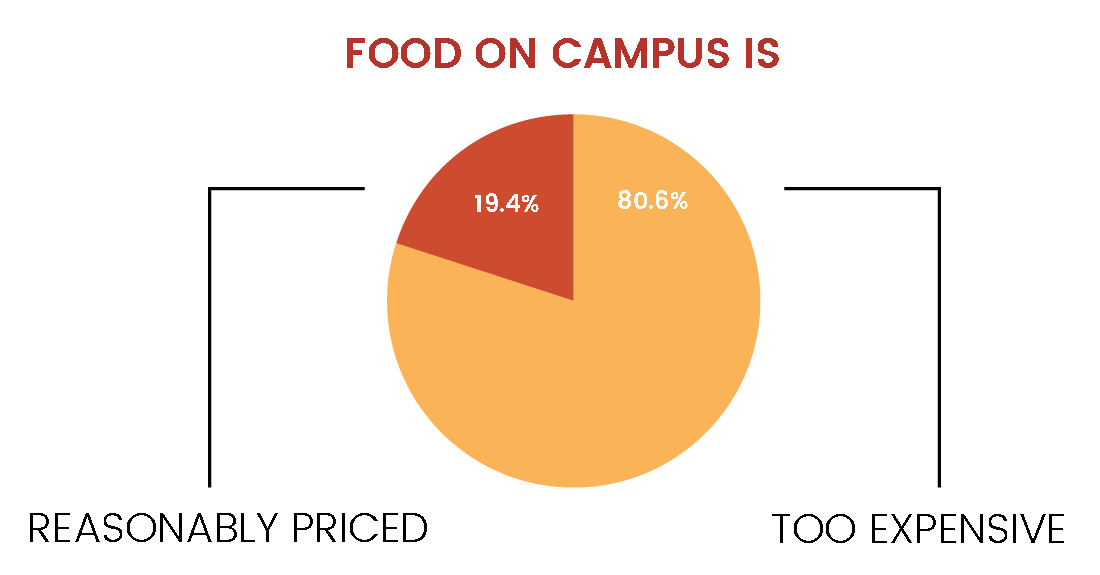 "We have a business model that we have to work on and most of our things are based on a cost percentage basis," said Lon Chase, associate director of Dining Services West. "This is the cost percentage that compares to our industry standard and then this will pay our bills."

Prices between the Corner Store and the local Fastrac are certainly comparable. Although there were some variations, neither store tended higher than the other. Reporter collected this data by observation. There are certain items, like bread and cereal, that are not carried by the local Fastrac, so they are impossible to compare. Emails to campus store managers for a list of items sold in their stores and the prices were ignored or denied. Rene Rodriguez, manager of Bytes, said that it was against their vendor's policies to discuss prices.

Comparing prices in the restaurants are harder. Chase said that they have more costs than most restaurants, but provide higher quality than fast food places. However, some students had concerns about quality, especially produce (and pepperoni).

"Commons changed the pepperoni used on their pizza and replaced it with little turds that burn in the oven," a survey respondent commented. "[It] apparently necessitated a 10¢/slice price increase as well."

When asked about the lower quality of produce available in the Corner Store and other grocery places, Engdhal and Chase said they had never heard that complaint and would look into it.

Even with food so expensive, the meal plans provide enough money to eat comfortably and then some.

"It's extremely easy to gain weight with these plans," said Goldstein. "You have so much extra debit ... you just end up buying crap."

However, both Chase and Engdhal said that they had seen a marked increase in the consumption of fruits and vegetables in recent years. Dining Services has taken notice of this trend, and they are trying to provide more options for healthy foods.

"We're introducing less and less fried food, and it's being accepted," Engdhal said. "But we still sell a bunch of fried food; so the option's there."

Samuels said that they try to have as many points of purchase, including vending and concessions, so students can get the full value out of their plans. They do this by providing students with a variety of options.

Meal plans are required because students in dorms lack the appropriate cooking facilities to make food for themselves. Engdhal expressed concern that if left to their own devices, students would come up with innovative but dangerous ways to cook food in their dorms.

"We don't want you worrying about where your next meal will come from."

"We don't want you worrying about where your next meal will come from," Engdhal said.

Samuels emphasized that Dining Services was not afraid of change, and welcomed student comments about what they can do better. He cited adding the Tiger 5 plan in response to feedback from student focus groups. The current plans required for freshmen have some pitfalls, as there are always going to be people that don't fit into their calculations. But the best thing to do is to give them your feedback and let Dining Services know what you want to see changed.

Goldstein hoped to convince them to let him onto a Silver plan his last year, which would have saved him $2,490. He is currently on the Orange (previously known as "all debit") plan, the same one he had his second year. He recalled being left with too much "debit," as it was called then, at the end of the year and buying up food.

Engdhal and Chase both said that in recent years, this hasn't been happening as much. The end of the semester sees only a slight uptick in sales. While things are improving, some students are still disgruntled with how much they have to spend for these meal plans, compared to how much they feel they need.

"It's a challenge to spend all your money during the semester," said Goldstein. "And that doesn't make much sense, does it?" 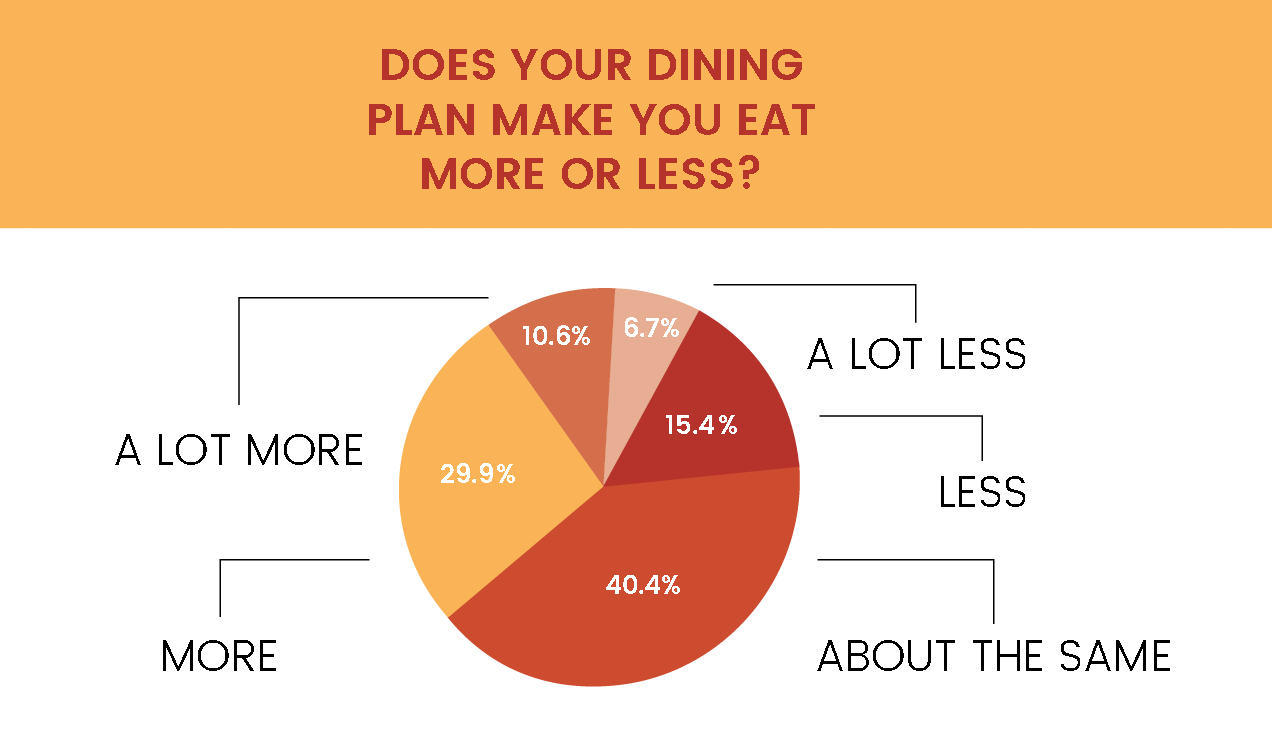