The Spooks Just Ain't What They Used to Be

Halloween is one of the most popular festivals celebrated in America. There are a multitude of ways to celebrate, but the most common way of celebration is trick-or-treating.

Max Robbins is a second year Physics major who celebrated Halloween a lot as a kid.

“[Halloween is about] trick-or-treating, being with family and eating snacks,” Robbins said.

Of course, some people have different ideas about how to celebrate. Patrick Browne is a third year Management Information Systems major.

“You gotta get scared — spooked!" he said. "You gotta go out and do something scary [that] you've never done before.”

There are many of ways to celebrate, and the options only expand as you get older. 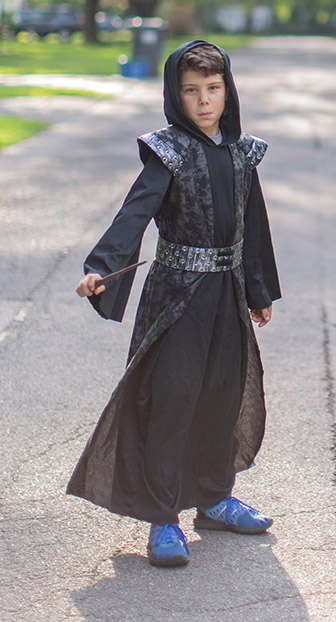 Celebration as a Child

As children, a lot of us went trick-or-treating around the neighborhood. Many dressed up in costumes and counted candy at the end of the night with their friends.

"I would dress up and go trick-or-treating with my brother and dad,” Robbins said.

“We planned it for a while, had our route all planned out and our costumes were chosen in August,” Moss said.

“I’d pick my favorite superhero at the time and dress up as them. I would go to school in costume, and then I’d go to friends’ Halloween parties," he explained. "I wasn’t big on trick-or-treating, but I got lots of candy anyway.”

Celebration as a High Schooler

“The [kids] in my neighborhood were my age— so [after we grew up], parents stopped participating. My neighborhood went dark,” Robbins said. “I dressed up as a teacher or something funny in the years after, but no real celebrating, no trick-or-treating.”

Moss stopped trick-or-treating his freshman year of high school. He'd reasoned that it was his “first step into being an adult,” which made sense at the time.

“I was a teenage boy and I didn’t want to do things that weren’t cool,” Moss said. “I thought dressing up was stupid and I wanted to get away from childish things.”

Browne still attended parties through his high school career; though, he admitted to a big change in costume.

“Only the girls dressed up. For guys, it was more about having a scary mask and being adult rated. Guys didn’t dress up as much,” Browne explained. 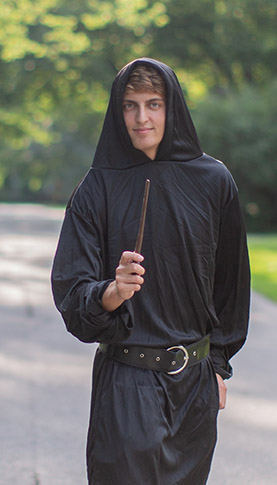 Celebration as a College Student

As college students, we are incredibly busy and, unless you’re particularly big on Halloween, celebrating it might slip your mind each year. Trick-or-treating is a distant memory due to the stigma instilled into you during high school, and dressing up might also be. If college students dress up, it’s often a homemade costume with little effort involved.

“I didn’t celebrate last year, I was busy,” Robbins said. “I might go to classes dressed up this year. Lots of people did it last year, it’s not weird, it’s fun.”

“I might go to classes dressed up this year.”

Moss admitted that he didn’t get invited to parties in high school, and he still doesn’t. But given the chance, he'd love to go and express his creative energies. Meanwhile, Browne has changed his celebration tactics now that he is in college.

“Now I just go out to the nearest club. People try to look like celebrities and people they look up to, like Drake,” Browne said.

The Stigma Behind Trick-or-Treating

The stigma surrounding trick-or-treating once you're older is evident. You get disapproving looks from parents, and everyone in school tells you it’s not cool. Why does the stigma exist though? Where did it come from? Why don’t we see adults in costumes trick-or-treating every year?

“[Trick-or-treating is] seen as a little kid thing to do because you’re collecting candy. Once you’re older you would rather party and buy candy yourself,” Moss explained. “Adults playing dress up has a stigma.”

As college students, we are particularly low on money and may not have enough to afford the costumes we want. We are also busier and don’t have as much free time to put into homemade costumes.

“We stop caring about candy as much, and it’s a lot of effort to do costumes," Robbins said, "If you’re buying [the costumes] versus your parents, that’s another thing to consider.”

“My transition into high school stopped me from trick-or-treating,” Moss said.

“It’s more about friends and community now, but before it was about getting snacks and candy.”

Robbins agreed, “I stopped trick-or-treating because others stopped.”

As we get older, the idea and excitement of Halloween changes.

“It’s more about friends and community now, but before it was about getting snacks and candy,” Robbins said.

How Can I Celebrate This Year?

RIT has had celebrations for Halloween in the past. There are some clubs on campus that also do Halloween celebrations. A good way to stay updated on such events is to pay attention to flyers and emails.

Moss is in special interest housing, and said they may do something this year.

“Last year, we did a game night in costume,” Moss said.

Browne said that for Halloween, he hopes he’s not here.

“I plan to go to Toronto. My friends and I have been trying to go for awhile, but we never go,” Browne said. He hopes to party in Toronto, as well as sightsee.

There are many ways to celebrate, and some are easy to do. Of course, you can go to a Halloween party, or even throw one. You could also watch a scary movie with your friends, carve pumpkins, ride a hayride or go to a haunted house — or even eat a ton of candy and regret it the next day.

There is an abundance of opportunities, so don't get discouraged by the loss of trick-or-treating — spooks can still be a blast.