The Six Codes of Nonverbal Communication

You’ve likely been able to tell whether or not your mom is actually upset with you by analyzing her tone of voice, and chances are she knows your reaction by reading the look on your face.

Nonverbal communication is "a process of generating meaning using behavior other than words," according to the book "Communication in the Real World."

Dr. Bonnie McCracken Nickels, a visiting lecturer in the School of Communication, said the majority of our language is nonverbal.

"As listeners ... we watch, we listen, we observe how people communicate; and that actually tells us a larger amount of what someone is trying to say to us than the words that are coming out of their mouth," she said.

There are six different nonverbal codes, each of which influences first impressions, our relationships and the overall generation of meaning.

Kinesics refers to the movement of our hands, arms, face and body to convey meaning. It's how we position ourselves during a conversation or where we look when we are talking. This can communicate our interest and confidence in the interaction. During a job interview, your posture communicates a host of information.

Kari Cameron, a senior lecturer in the School of Communication, said you don’t want to seem too relaxed, or it might communicate overconfidence. But you also don’t want to come off as too stiff or uptight. A happy medium, Cameron suggests, is to lean slightly forward to signal interest.

Eye contact plays a major role in how we are perceived, as well. Keri Barone, another senior lecturer in the School of Communication, said that deliberately maintaining eye contact can be tricky. Some people may stare too much, but others not enough.

It's not just where you look or how you sit, though.

Haptics is communication by touch. The strength, placement and duration of someone’s touch can communicate anything from empathy to power to how we define a relationship.

Nickels studies immediacy behaviors (the use of touch to communicate empathy and concern) in her research. If seated, a touch on the shoulder or knee from a doctor can show care and empathy for their patients’ situation.

"What my research has particularly found is [that] when you couple socially-supportive messages with nonverbal immediacy behaviors ... it actually enhances your supportive message," Nickels said.

"Whereas sometimes we give what I refer to as ... the ‘limp fish’ where [the handshake is] just dangly; and from that somebody can read that you’re disinterested or that you have a lot of anxiety," Cameron said.

Haptics can also help determine relational statuses. You’re likely to spot those who are romantically involved holding hands. Likewise, you could expect this of a parent and their child.

"Really, touch is the gateway to any kind of intimate relationship, be it a friendship, a family member or romantic relationship," Barone said.

When looking at the way we touch people, the closer we are to someone, the more likely we are to touch them in more intimate or personal ways.

The way space and distance influence communication is called proxemics. According to "Communication in the Real World," there are four kinds of proxemic distances: public, social, personal and intimate. The public space is generally 12 or more feet away from an individual, and the social space is anywhere from four to 12 feet. 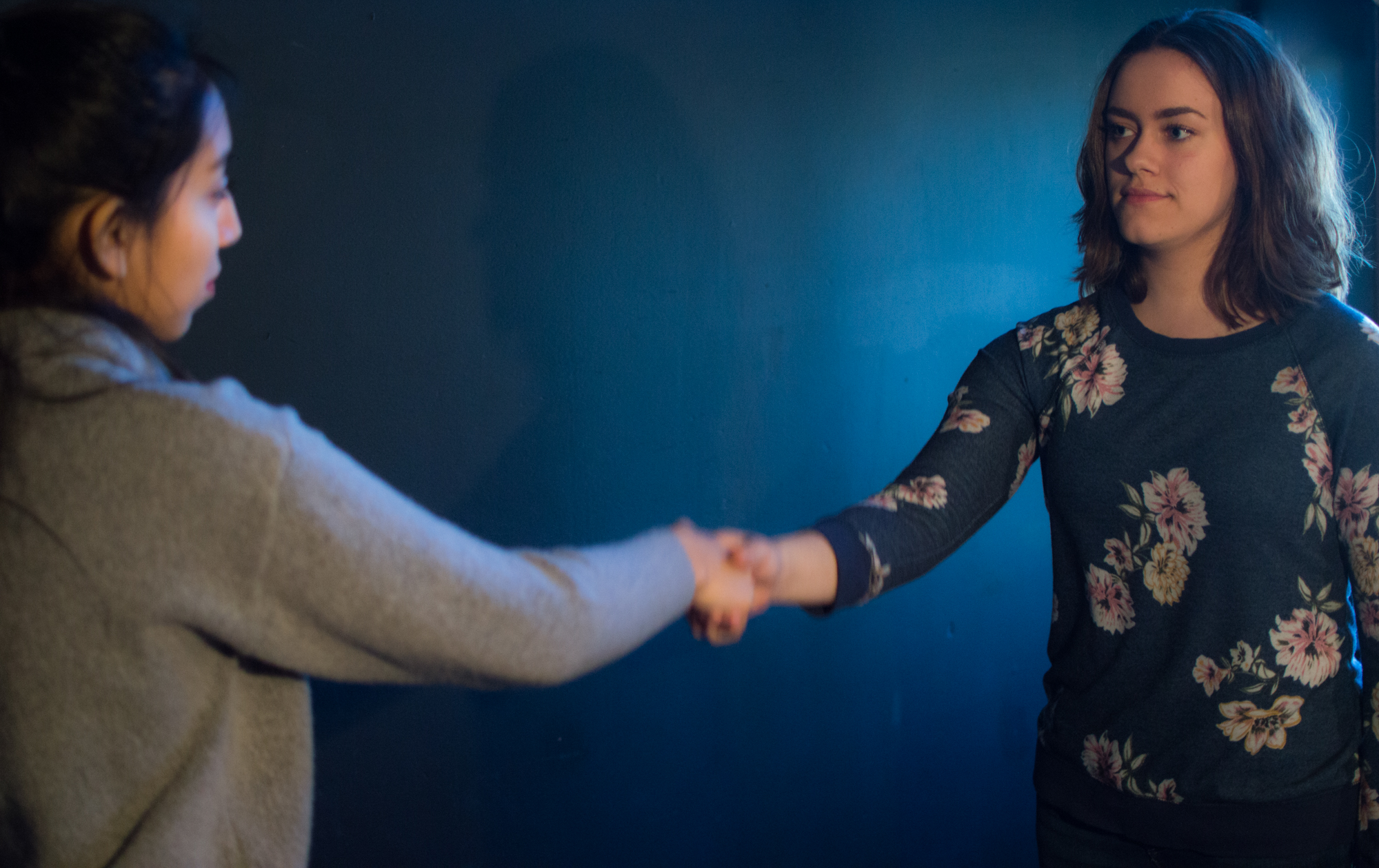 Personal space is generally around an arm’s length away, according to Nickels. Our intimate distance is reserved for those whom we are closest to. However, where people are in our space is largely contextual, she added.

"If you’re on a crowded bus riding to campus and it’s incredibly full, it’s going to be expected that people are in your intimate space," Nickels said. " ... But if no one is on that bus, you expect to have that personal space."

Proximity to others might foster relationships, according to Duck’s Filtering Theory. We use sociological cues, which are demographic factors that determine who you are more likely to come in contact with.

"A forced proximity really can help us to gain comfort and familiarity and eventually friendships," Cameron said. "I sat next to my husband in class in grad school here, and it was from turning and talking to him in the classroom that we developed a friendship and started dating."

"A forced proximity really can help us to gain comfort and familiarity and eventually friendships."

Another aspect of proxemics is territoriality — our desire to occupy and claim spaces as our own. Although there rarely are assigned seats in college, students still gravitate toward the same spot day to day.

"Even to this day it throws you off if you walk into a classroom and you've been there all semester, and it’s Week 13 and someone is in your spot," Barone said.

With proxemics, it’s all about knowing the boundaries of each other's space.

Vocalics is the study of paralanguage and how we use that to convey meaning.

"Paralanguage is all the ways we can communicate using our voice — it’s these utterances that aren’t necessarily words coming out, but it’s everything else," Nickels said.

It includes pitch, tone, volume and more. Aside from the words we utter, meaning is based on the change in these paralinguistic factors. Pitch, Nickels said, can frequently work against women.

"The unfortunate gender bias that occurs is that women, because their voice has a higher pitch, tend to sometimes be perceived as less credible," Nickels said.

As she stepped into a power role, former British Prime Minister Margaret Thatcher tried to seem more authoritative by working with a vocal coach to lower her vocal pitch, BBC said.

Not only does paralanguage play a large role in how others perceive us, but so does the lack thereof. With Americans under 50 using text-based communication most frequently, according to Gallup, nonverbal communication aspects are lost due to the inability to recognize paralinguistic changes.

"I am always bothered that there are no italics in text yet," Barone said. "In my friend circle, we do a lot of capitalizing and ridiculous punctuation things. But it's necessary to add emphasis and to be clear."

"I am always bothered that there are no italics in text yet ... it's necessary to add emphasis and to be clear."

Cameron, Nickels and Barone all said they recognize the nonverbal deficit within text communication, and that emojis are one way to reduce this. People are trying to find ways around the deficit, Nickels said, but there is still much room for misinterpretation.

If you have an interview that starts at noon, it’s expected that you arrive sometime between 11:50-11:55 a.m. Any earlier, it could seem like you are putting pressure on the interviewer to come and greet you, Cameron said. Any later, judgments about your character may be made, and they likely won’t be good.

"People who tend to be on time or early for things may be viewed as more capable or higher achievers, where if you rolled in late all the time, that will be perceived perhaps as a lack of interest, or maybe you’re not doing [your] job effectively," Cameron said.

If a student is consistently late to class, the professor might think the student is disorganized, lazy or lacks time management, Nickels said.

Time can also communicate power. A CEO can call a meeting for 9 a.m., but if they are late, it’s expected that everyone waits for them to arrive and not question their tardiness, Nickels said. When someone gets pulled over, they are then on the cop’s time. At a doctor’s office, it’s expected that you arrive 15 minutes early, but then it is okay for the doctor to make you wait an hour.

First impressions are made depending on when one shows up, just as they are made by what you arrive wearing.

Personal presentation factors, such as how we dress, communicate to the world who we are and whether or not we are credible, Nickels said.

"Some people would say that it shouldn’t matter what you wear or how you do your hair, but the truth is we are always looking at that and judging people ... based on how they’re dressed," Cameron said.

Most of this has to do with how the receiver interprets your efforts. For a job interview, it’s expected that you are in your most well-groomed state. Anything less than that and the employer might think lowly of you; the same works in the classroom.

"If a professor were to walk in on day one in the beginning of the semester wearing sweatpants, you’re going to immediately make a first impression on that person, and that first impression is going to be pretty stable [for the duration of the class]," she said.

"It’s not enough to be effective verbally."

How a room is set up also influences perception. In a classroom, for example, there are unwritten rules about how it should look. Barone took a class in graduate school about these unwritten rules and found her professor violating them on day one. The professor’s desk was in the middle of the room, and all the student desks faced in the opposite direction.

"She [the professor] stood on the middle desk with no shoes on," Barone said. "And we [students] were like, ‘Okay, so who do we call because the teacher’s gone crazy.’ But her point was that ... we know how that general configuration is supposed to go and if it doesn’t go that way, it throws off all of our communication."

"... Women, because their voice has a higher pitch, tend to sometimes be perceived as less credible."

The ways in which we occupy space and present ourselves might seem unimportant, but it can say more about a person than words ever could.

Becoming an effective communicator, especially nonverbally, doesn’t happen overnight. Nickels said the first step to improving is to internally reflect on how the messages you send are interpreted. Only once you’ve honestly identified your strengths and weaknesses can you begin to improve. Even then, relying solely on yourself to be the judge could be difficult.

"Maybe even take somebody as an outside observer to pay attention to what you’re doing to report it to you because again, we don’t always know what we are doing," Cameron said.

Barone noted that even simply knowing that you have to constantly adjust when sending and receiving messages can help you improve.

"It’s not enough to be effective verbally," Nickels said. "People are watching with a keen eye to see how you’re communicating, how you’re relating to other people, how that message is coming out — and that’s what they’re going to take with them."