A Relic of Rochester Industry Reborn

The Rise and Fall of Kodak

The former glory of Kodak still hangs heavy over Rochester. Starting in 1888 with the debut of its first camera, Kodak would go on to forever change the way we share experiences as human beings with the advent of easily available photography. Kodak was responsible for a lot of firsts; from pocket cameras to amateur color photography, it was the original Rochester innovator. Unfortunately for Kodak, innovation is a double-edged sword.

Though it first developed a digital camera in the mid 1970s, Kodak sat on its hands and did next to nothing with the invention for fear of ruining its lucrative photographic film business. By the time the digital revolution hit photography, it was all but too late for Kodak. It signed its own death warrant. The market went digital, and Kodak wasn’t diverse enough to save itself. Starting around the turn of the century, things truly started going south for Kodak. It cut its workforce by the thousands, stopped trading on the stock market and filed for bankruptcy.

Since the early 2000s, the fate of Kodak hasn’t been entirely clear. There are rumors that it plans to enter the smartphone business, and it still sells film kits to indie movie developers who prefer to shoot on actual film. However, there’s little to no chance the Kodak that was will ever be again. Unfortunately, such is the fickle nature of technical industries: no giant lasts forever.

The former glory of Kodak can still be found all over Rochester, you just need to know where to look. If you gaze out at the skyline of Rochester, you’ll see Kodak Tower, an obvious and distinguished landmark. A picturesque building built in the French Renaissance style and emblazoned with a red neon sign reading KODAK illuminating the night sky, the 19-floor tower has been Kodak’s headquarters since 1914. 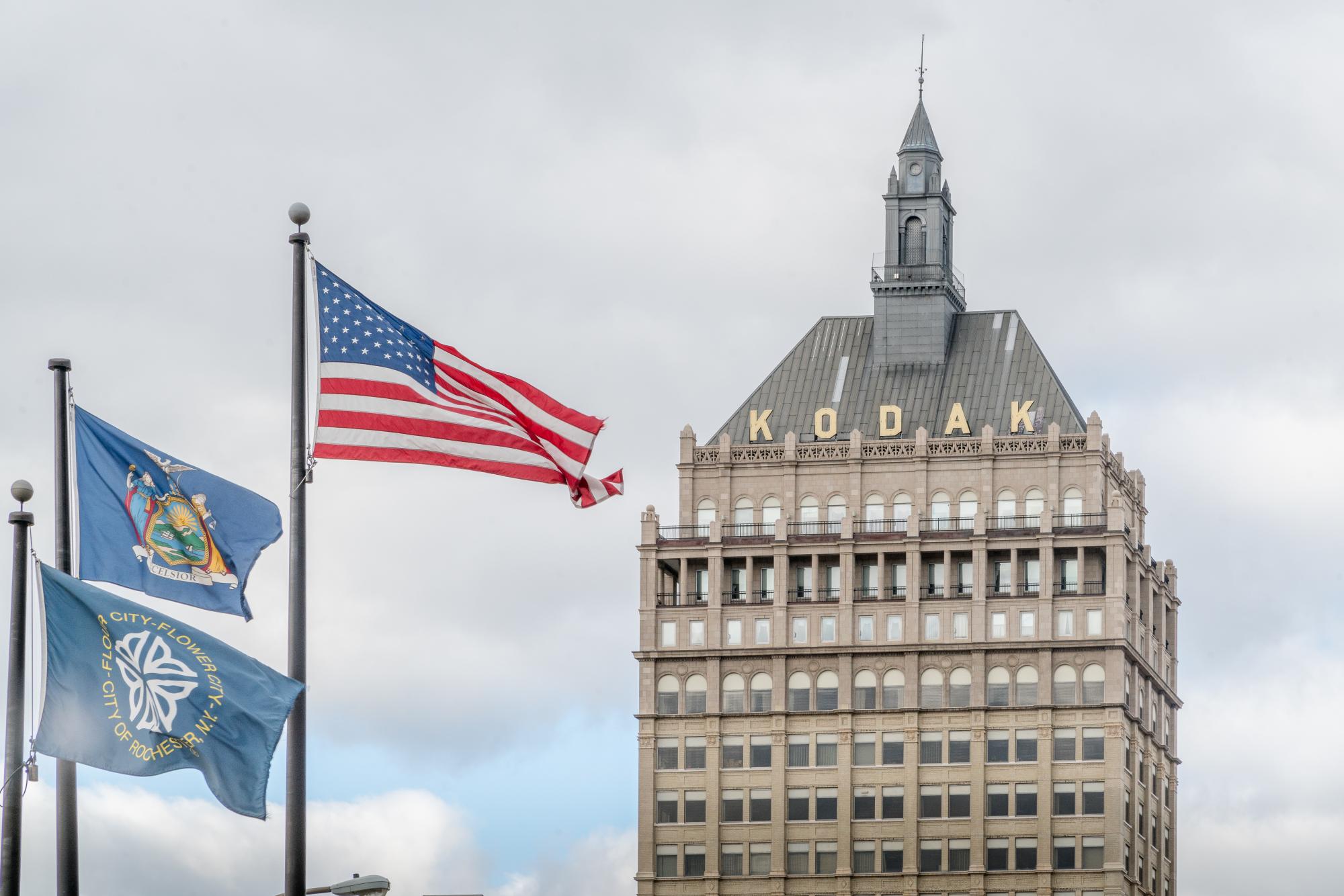 The largest and most obvious remnant of Kodak’s manufacturing business is Eastman Business Park, located just outside of Rochester. Just as Kodak has gone through changes over the years, so has the former Kodak Park. Since 2007, several buildings have been demolished to make way for new industry; the most recent demolition took place in July 2015.

The medical marijuana industry will soon be one of the newest residents of Eastman Business Park, which will be leasing over 200,000 square feet to Columbia Care LLC, a leader in the industry in the United States. Though the introduction of medical marijuana is an interesting prospect for the Rochester area, there’s a sleeping Kodak giant closer to home for RIT students, and it’s about to awaken in a big way.

There’s a sleeping Kodak giant closer to home for RIT students, and it’s about to awaken in a big way.

Just a stone's throw from RIT off of East River Road sits the Riverwood Campus, an overgrown and long-abandoned Kodak facility overlooking the Genesee River. The campus opened in the late 1970s as a training facility for professionals using Kodak products, a meet-and-greet center of sorts. It was built in a distinctive late-1960s, early-1970s style. The building, designed by the architecture firm of Skidmore, Owings and Merrill (SOM), was heavily influenced by famed architects Mies ven der Rohe and Le Corbusier. SOM is still around today designing influential works of architecture like One World Trade Center in Lower Manhattan, the tallest skyscraper in the Western Hemisphere. 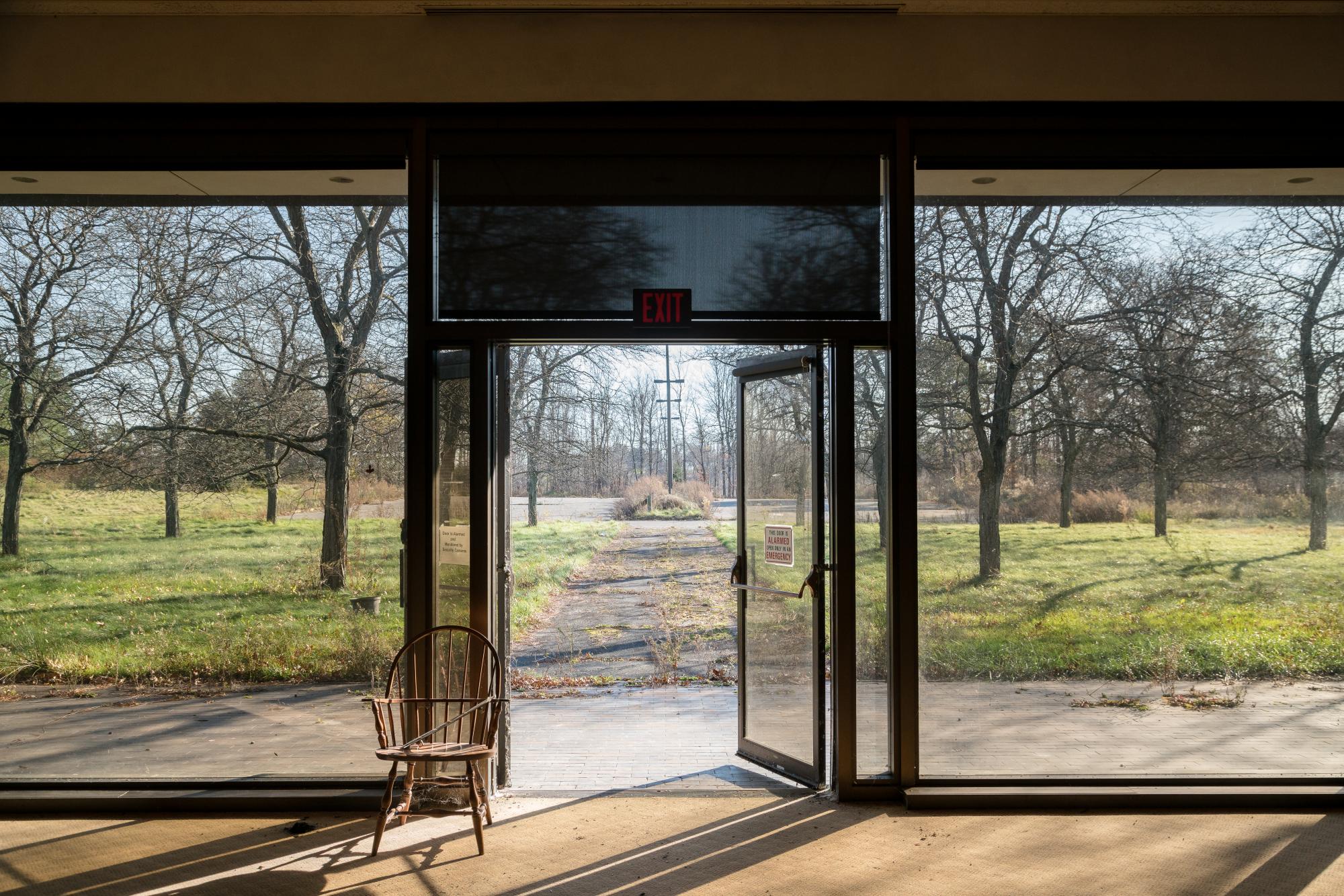 “You always felt special there,” remembered Jerry Dominik, a 39-year veteran of Kodak who first visited Riverwood in December of 1976. In that time Riverwood was referred to as the Marketing Education Center (MEC). MEC was primarily a customer-facing site, but was also used for training employees in the use and repair of various Kodak products. Dominik was originally based out of Chicago and would fly into Rochester for a few weeks at a time to receive repair training for the Kodak photocopiers he supported back home.

MEC was meant to impress potential customers and clients. While in customer-accessible areas at MEC, Dominik and his colleagues were told to be on their best behavior. Once they were behind closed doors in the lab and training areas, they could loosen their ties and relax a bit. Needless to say, MEC was meant to impress Kodak’s deep-pocketed customers.

Dominik mentioned numerous times that the food was always great and the views from the cafeteria were stunning. The cafeteria building was built in a multi-tiered fashion similar to that of Grace Watson Hall at RIT, so that diners could have pristine views of the Genesee River. Granted that employees were not the audience Kodak was trying to impress, Dominik remembers always eating on the lowest level of the cafeteria, which had the least impressive of views of the stunning property. 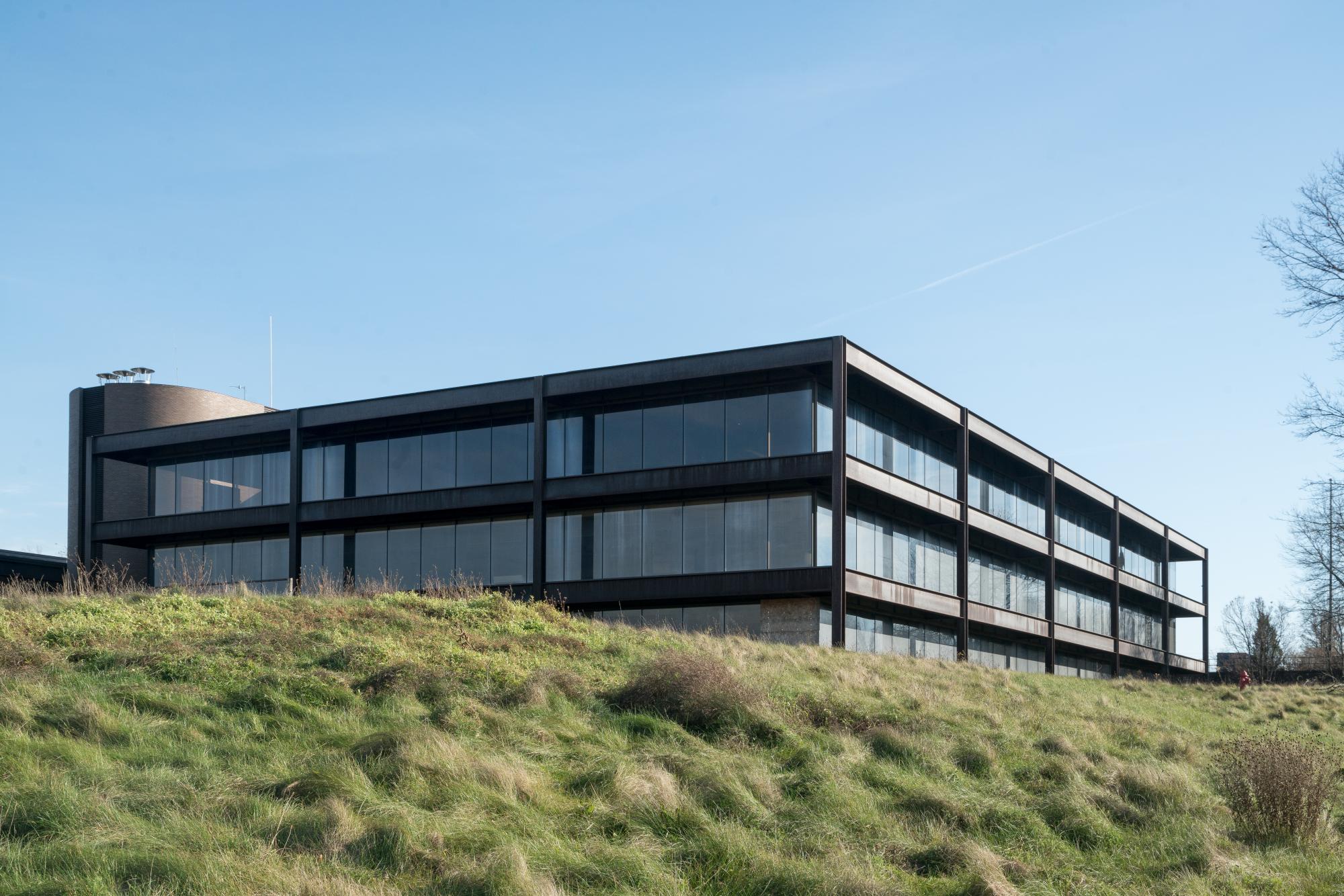 Interestingly, MEC was also the location from which Kodak Business Television (KBTV) was broadcasted. A large satellite dish behind the building was used to record messages at MEC which were then linked up to satellites via encrypted streams and could be accessed across the country, and possibly the world.

The multi-building campus has sat abandoned since the early 2000s, a casualty of the downfall of Kodak, and has changed hands a few times since then. In 2005 a California real-estate developer purchased the site in hopes of breathing new life into it. Unfortunately, his concept of new life was opening up a casino three miles from a college campus, so it was quite short lived. The facility once again fell dormant, waiting for a knight in shining armor to come and save it. Fortunately for the distressed facility, a local developer is hoping to wake up Riverwood with true love’s kiss.

Fortunately for the distressed facility, a local developer is hoping to wake up Riverwood with true love’s kiss.

Rising From the Ashes

Rochester developer Frederick Rainaldi Jr. has a proven track record of breathing life into relics of Rochester; he redeveloped the Culver Road Armory in Rochester and High Point in Victor, just to name a few of his successes. It was from his office in the Chapin Building on Saint Paul Street that Rainaldi shared his enthusiastic vision for Riverwood.

“We’re one city,” Rainaldi said. "There’s more to redeveloping Rochester than focusing on the city itself. The suburbs are equally important."

Rainaldi is the right man to meet the challenge; it almost seems that he seeks them out, and Riverwood is no exception. As a relic of the 1970s, the site has asbestos that needs to be remediated and about 30,000 square feet of single-pane glass windows in desperate need of replacement. Riverwood has afforded him a unique opportunity because it already has so many amenities that modern offices crave. From an easy commute to vast outdoor spaces and 10,000 square feet of rooftop gardens, Riverwood is set to be a utopia for modern business. It’s a match made in heaven for RIT, located just a few miles down the road. 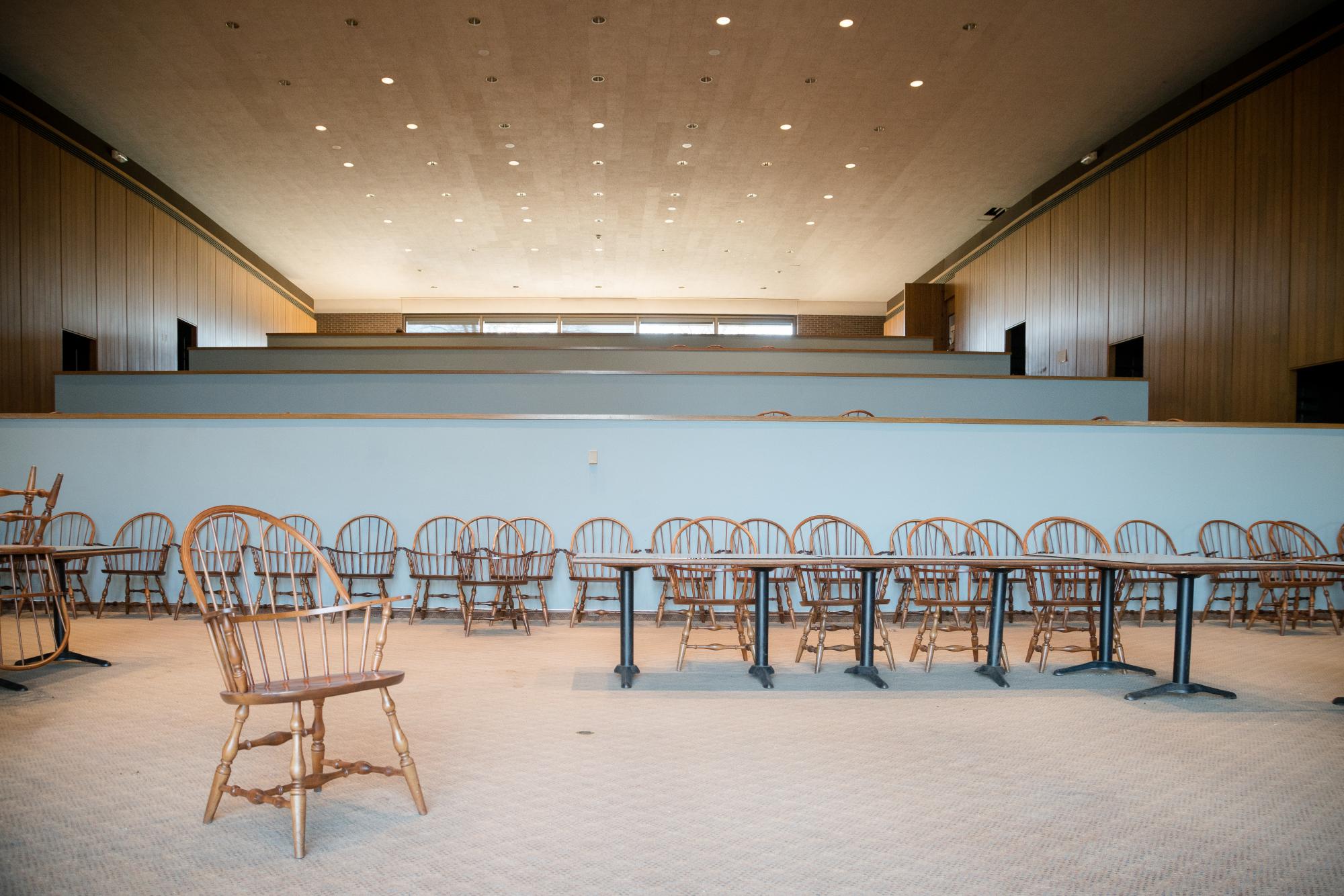 The site is slated to feature fully ADA-compliant public parks and boat launches for every imaginable non-motorized water craft. There will be miles of hiking trails and so much more. It will be a space where the public can feel welcome and safe. For those who think the campus is just too good to leave are in luck. Rainaldi and his team have sold 56 acres of the site to The Michaels Group, one of the largest housing developers in the country. The Michaels Group plans on building student housing on the property unlike anything the Rochester region has ever seen that will house over 600 students. The first students should be able to move in around August of 2017.

While the housing has to be built from scratch, the Riverwood buildings are already there, and tenants can expect to begin moving in Spring 2016. Change takes time, and Riverwood will be well worth the wait. Rainaldi knows that he cannot incite change alone, and couldn’t stress any further that the redevelopment is a collaborative team effort.

Change takes time, and Riverwood will be well worth the wait.

There’s a marked difference between hearing about a major project and actually seeing it come to life. Rainaldi invited me over to Riverwood to take a look for myself. I live down East River Road; I've been driving past Riverwood everyday for the past two years, and it’s always piqued my curiosity. I’d be lying if I told you I didn’t think about exploring the site myself a number of times over the years. Over the last few weeks, there have been some noticeable changes to the site from the road. The once-overgrown landscape has been trimmed back, revealing the angular 1960s architecture. It’s beginning to look beautiful again, and that’s just from the road. 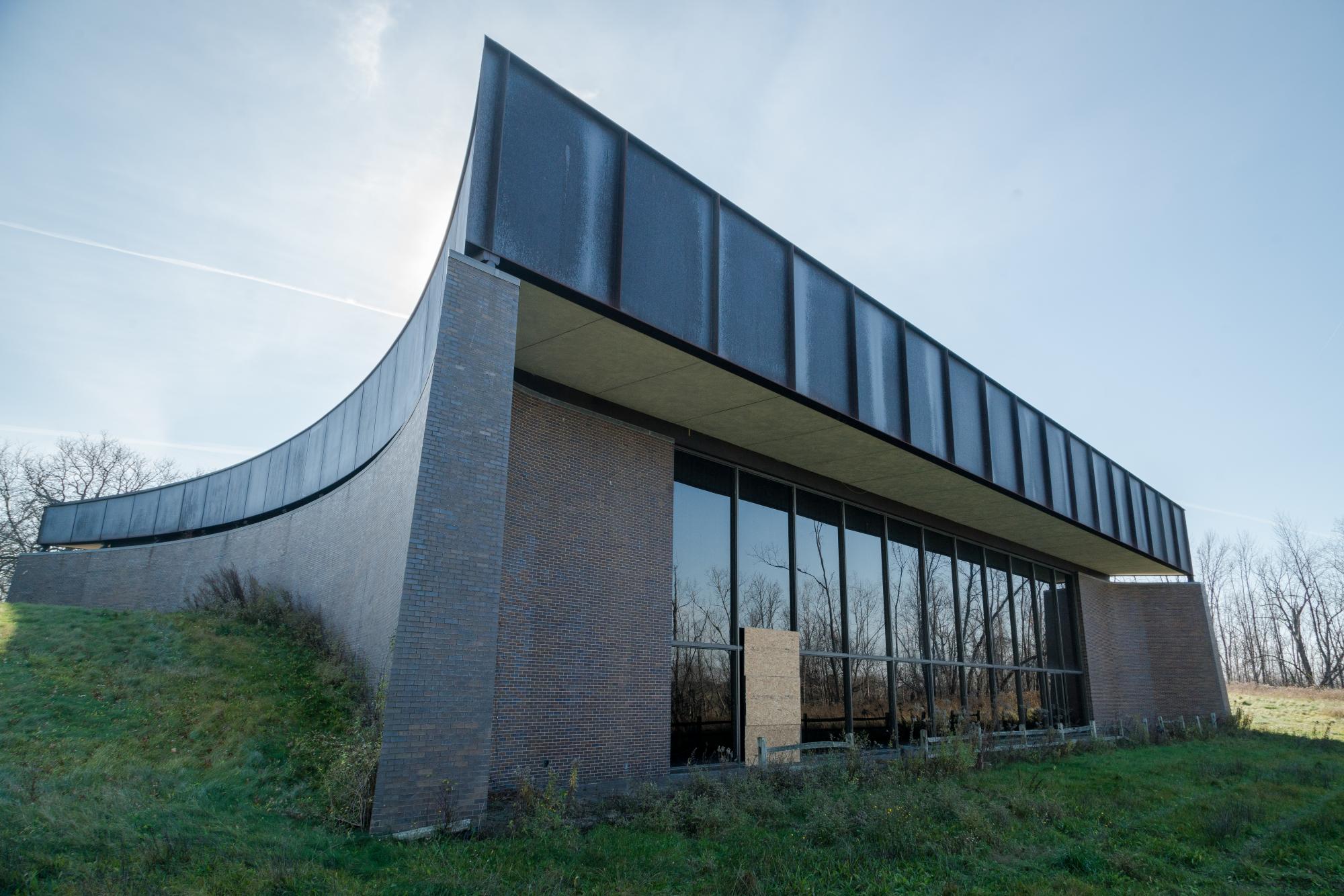 Next to the main reception building sits the cafeteria hall. Though it looks like a freestanding structure, it is actually connected to the rest of the campus through an expansive underground tunnel, similar to those found on the RIT campus. We spent close to a half an hour wandering the grounds as Rainaldi got himself set up and got some of the buildings opened. After our initial stroll around the grounds, Rainaldi invited us into the cafeteria to take a look inside.

Just inside the cafeteria doors sat a behemoth of a granite island, and leaning up against the island was Kevin Koss of Landsman Real Estate Services. Koss has been maintaining the facility since Kodak formally left the site. Koss explained that for the first few years, the site was kept in turnkey condition. The buildings were heated and the grounds were fully maintained. The buildings are no longer heated, but there is still electricity and ample light to look around.

Looking out over the cafeteria from the top tier, Jerry Dominik’s words rang out in my mind. I felt like I was truly somewhere special. The massive glass windows overlooking the river were shuttered by deep maroon curtains. An old wooden chair kept a small section of the glass exposed. Since they stopped heating the buildings, the mechanism that moves the curtains has stopped working and they haven’t been able to get them fully opened up since. Each side of the cafeteria is flanked by two executive dining rooms with glass back walls for pristine views of the surrounding landscape. Rainaldi and Koss gave Rauchwerger and I free range to the entire building. We explored every nook and cranny, discovering endless features and details. From heavy wood cabinetry to dumbwaiters, it’s clear that Kodak spared no expense. On the lower level of the cafeteria there was still a Kodak branded podium, begging to be used again.

Our next stop was over to the main reception building. Unfortunately, due to safety concerns, we were not permitted to explore far into that building, or into any of the others. It is an active construction site with a lot of remediation and cleanup work ahead of it. We were permitted to walk around the first floor, and I was far from disappointed. Every single exterior wall of the building was made of glass. The views were awe-inspiring and all-encompassing.

Rainaldi told me his goal is to make Riverwood Tech Campus the “Silicon Valley of the East.” He’s surely on his way. Unfortunately all good things must come to an end, including my tour of Riverwood. Rainaldi drove away and flashed us a quick peace sign. Rauchwerger and I stuck around for a bit longer, walking the full perimeter of the site, even taking the time to fly a photo drone for an aerial vantage point. The students who will get to live in the Riverwood facility are lucky indee 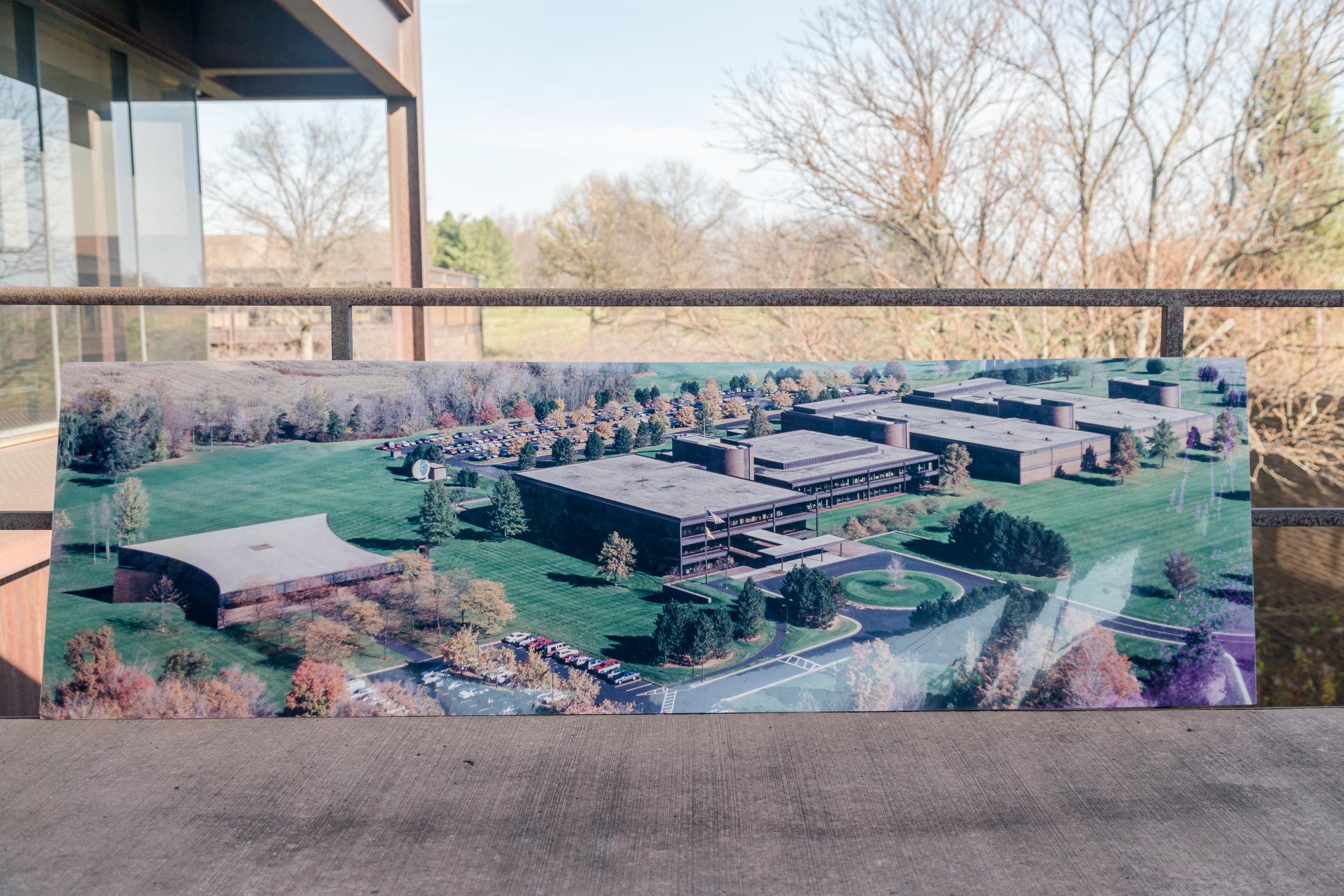