“16 Types of Facial Hair and What They Say About You”

“The Quest for Every Beard Type”

When your Google search contains the word “beard,” these are just a few things you Our fascination with facial hair has been around for ages — since the times of Ancient Greeks and Vikings — and it’s only growing. In those times, facial hair was worn at different lengths and kept groomed certain ways in order to show wisdom and honor. Now, from Dumbledore to Gandalf, wise men are portrayed in movies, TV and books with long, full beards.

But the wise men and younger hipsters aren’t the only ones growing out their beards and mustaches. Since 2004, men all around the world have been putting away the razor for 30 days annually to raise awareness for two causes that are often overlooked: prostate cancer and depression in men. This phenomenon, known as “No-Shave November,” began 11 years ago when a group of Australian men decided to grow out their manly beards for a month, using the resulting media attention to promote prostate cancer screenings. These men became what is known as the “Movember Foundation.”

The original No-Shave November website encourages participants to forgo shaving for the month to “evoke conversation and raise cancer awareness” as well as donate the money that would usually be spent on shaving supplies to “educate about cancer prevention.” Plus, aside from being a symbol of wisdom, some people view facial hair as a symbol of ruggedness. Whether it’s Shia Labeouf’s iconic 2014 shoot with Craig McDean or Brad Pitt’s ever-evolving facial hair, the past 20-something years have shown beards in a more rough-and-tough light — and that mindset can’t hurt when it comes to battling cancer.

#NoShaveNovember in the Media: The Controversy

With all this media attention, there began a phenomenon. #NoShaveNovember graces Twitter and Instagram yearly, accompanied by photos of guys with their beards ranging from the just-beginning-to-grow phase to all-out Gandalf status. While prostate cancer awareness is still an incredibly important cause, the movement has also spread to promoting body positivity in recent years.

Here’s the catch, though: No-Shave November was started in order to raise awareness for two very specifically male issues. The fact that it’s also been adopted to raise awareness about the social stigma surrounding women who choose not to shave tends to spark some controversy every year, especially online. Although one side’s aspect is strictly medical and the other's is social, many view them as equally important issues. At the beginning of November, a few opinionated people took to social media to share their thoughts on women who wanted to go razor-free.

There are others who have spoken up in favor of female participation in the movement: 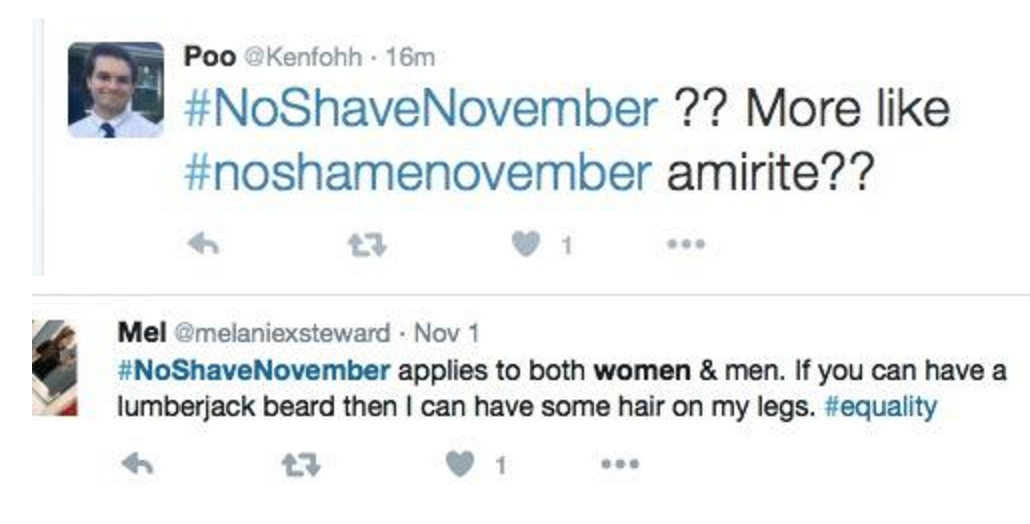 Maddy Rizzo, an RIT alumna who started going razorless one year for No-Shave November, stayed with it even after the official month was over. She shares what it’s like to have her body hair choices examined by others:

“I [would see] a lot of resistance towards women participating, and I remember seeing things online like … ‘[No-Shave November is] not a chance for you to grow out your hairy legs, you sasquatch,’" she said.

But for Rizzo, sticking with it after one November of not shaving was a matter of having confidence in her own body. That’s not to say that women who shave lack confidence; the alumna herself just remains comfortable with her choice not to shave, and the way her leg hair looks.

“It’s nice. I like it. I think it’s kinda cute,” she said. For many women, Rizzo included, participating in No-Shave November is just a matter of not feeling the need to put effort into shaving.

“It just got to the point where I was like, 'I don’t even know why I’m doing this. I’m way more comfortable not expending all this effort,” she said.

She went on to say that surrounding herself with supportive people was very helpful. For every person that cringes at the hair, she says, “there’s 10 people that don’t.” Going razorless after that November has not only had an effect on Rizzo’s body confidence; it has also helped with her own personal “expression” in general.

Dylan McCallum and Christian Lusardi, both of whom are first year Advertising Photography students, also seem to be on the more laid-back side of things when it comes to who can participate in the month’s festivities. In fact, neither of them participated themselves to promote prostate cancer awareness specifically. Lusardi is in a bet with two friends, and McCallum is going with the trend this November out of “sheer laziness.” When asked how long he’d ever gone without shaving, his response was “Probably a solid 15 years.”

Mario Hanna, a first year Industrial and Systems Engineering major, said that he thinks the women participating in No-Shave November are “pretty cool” and that he’s “sure it’s nice to take a month off from doing that.”

No-Shave November has brought media attention to more than one movement since its birth in 2004. Some people would prefer the movement to be more gender-inclusive, spreading awareness about the stigma surrounding women who go razor-less; others think that, because it was started in the name of a male issue, it should remain that way. Despite the controversy that surrounds this issue, when it comes to going razor-less for a good cause, most people believe there’s a little room for everyone to, well, grow.