The Life, Death and Afterlife of the Global Village Smart Suite

An oasis of technological superiority, the global village smart suite had technology in the walls, behind the bathroom mirror, in the windows, under the counters and even in the coffee table.

"We knew that some of the stuff we were putting in was a little crazy."

"We knew that some of the stuff we were putting in was a little crazy," said Rona Skinner, executive director of technology for Student Auxiliary Services. "You're not always given that opportunity to just put some things out there and see what happens."

Students who were interested in the idea were given an opportunity to stay in the suite for a few weeks in exchange for feedback.

"We learned that what students are interested in were not exactly what we expected them to," said Matt Campbell, an IT Manager for ITS who worked with the technology on the project. Campbell cited the smart locks enabled on the suite's doors as an example.

The suite was partially dismantled in September for two main reasons: First and foremost, the space was needed for students in emergency housing. Secondly, after only a year, the technology in the suite was outdated. This is one of the big challenges involved with building spaces with technology; it becomes obsolete faster than it is fiscally reasonable to replace.

“One of the things we learned from the smart suite is: advanced technology is great, replacing it and keeping it current is really expensive,” said Kurt Ingerick, executive director of Student Auxiliary Services.

"Advanced technology is great; replacing it and keeping it current is really expensive."

The solution to this is to build an environment where students will be able to connect in devices that they bring themselves. This allows RIT to build rooms that are technology-friendly while keeping the price tag low. Students can expect to see this concept implemented in the new global village building that should be operational in August 2017. The construction will not replace any existing buildings and will be located west of building 403.

Other lessons learned from the smart suite will be applied to the new building. While the plans have not been finalized, Skinner, Campbell and Ingerick have a good idea of what will be implemented. For one, the heating, venting and air conditioning (HVAC) system will be updated to address complaints from the existing Global Village buildings. In the new building, each room should have a separate temperature control as opposed to the current system of having only one thermostat per suite.

"When we built out the smart suite we had to cut holes in every room, in every wall to run cables and light controllers... so the new global is being built with removable panels and things like that," explained Campbell.

Some technologies will not only be built into the new building, but will become the new standard. When a building goes through an upgrade, expect to see USB inputs in the outlets and lights being converted to Organic LEDs (OLED). 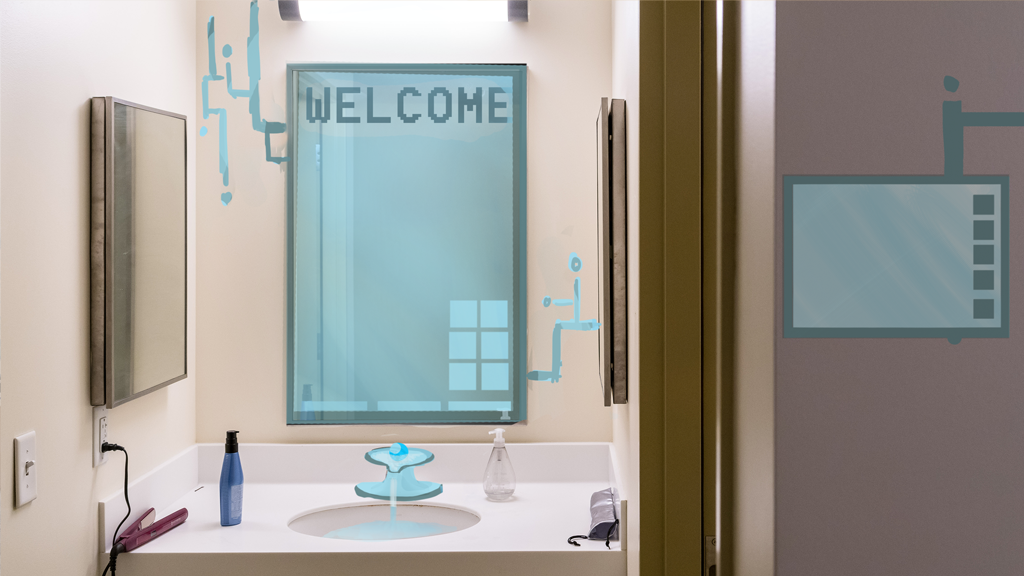 “I would expect to see the next generation [of lighting] to get retrofitted in the next three to five years because the cost to run them is going to pay for them so quickly that FMS is going to be pushing all the departments to upgrade it...because it just makes good fiscal sense,” Campbell said.

The team is also investigating a way to implement the smart lock system from the smart suite into the rest of the campus. The current swipe access to the residence halls is an old-fashioned system prone to failures in an outdoor environment and regular keys are cumbersome.

"What we're evaluating is [a lock] that uses your smartphone where you can tap your phone to the door," Ingerick mentioned. Fear not, those who still value their flip phones, there will always be a way to get in to your room with a key or proximity card. The upgrade would also let Public Safety remotely lock down a building during emergencies.

The fiscal college student in all of us are worried about how much this new technology will affect cost of living. Fortunately, the cost of living in the new building should be comparable to the existing Global Village buildings.

As for the grandiose smart suite, it is merely a shell of its former self, although there were a few things left behind. The large pieces of technology were all taken out and redistributed. For example, the flat-screen is now in the Bean's lounge. However, the lighting system, smart windows, screen in the mirror and the iPad in the wall all remain.

"We left some equipment behind and the light controller got hacked the other week," Campbell mentioned. The ability to hack into these systems is yet another challenge that must be evaluated when putting technology into private spaces.

For the new building, the suites will focus on providing the proper environment for students to utilize their personal devices and increase convenience. There will be collaboration spaces available on most floors that will attempt to implement more advanced technology.

The Student Government's Student Housing Committee is heavily involved with most of the decisions being made about this new building, especially the collaboration spaces and the style of housing. While the plans have not been finalized, the first floor will probably consist of studios while the upper floors will be four single bedrooms to a suite.

To administration, the smart suite was an experiment, the lessons of which can now be applied to the Global Village expansion, the new MAGIC building and future builds and updates.