Hearts on our Sleeves 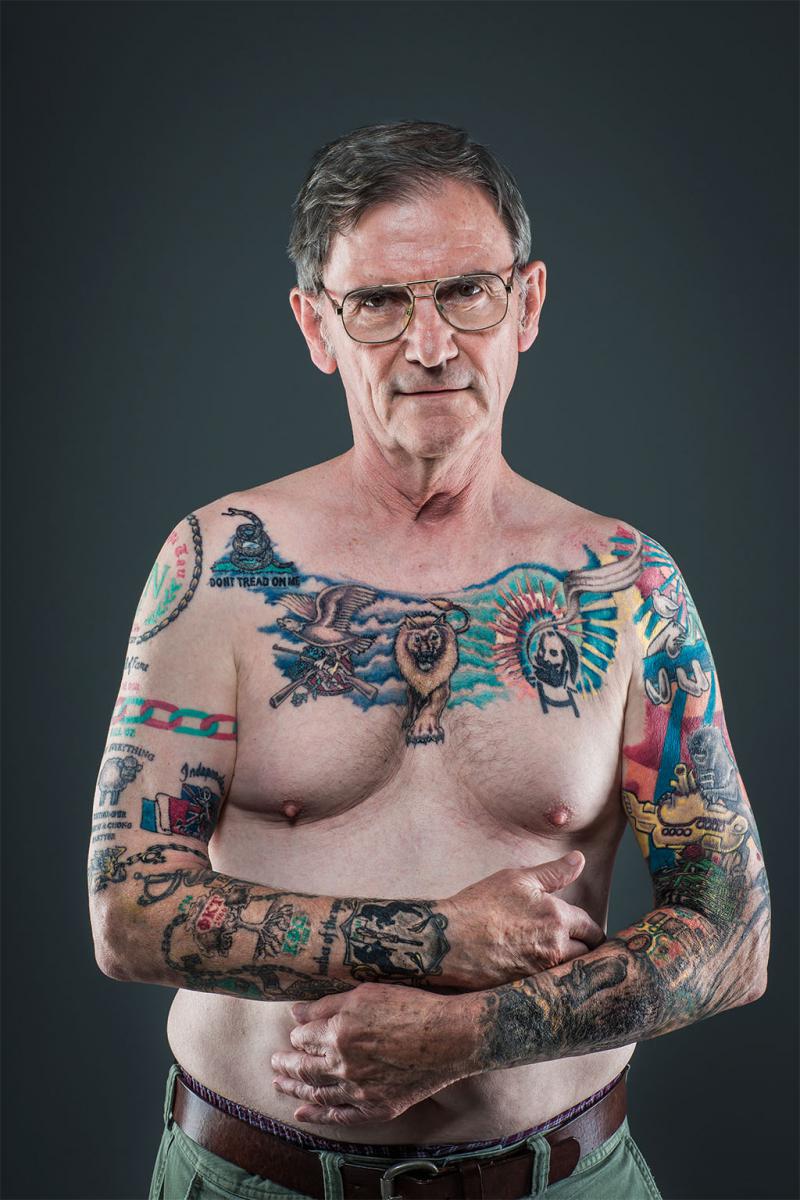 On the way back from a Rolling Stones concert in Canada, this is the last question the man driving through the border stop expected to hear. The guard had already double-checked his citizenship, so something must have caught his attention. There was a Smith & Wesson branded overnight bag in the back, but there was no way the guard saw that and definitely not before the guard caught sight of the driver’s bare arms.

Brightly colored, Gary Proud, 1967 Accounting alumnus, has two full sleeve tattoos. The left, a colorful mural of classic rock bands such as Steppenwolf, The Doors, Johnny Cash and the like. His right, covered in the symbolism of his Greek brotherhood, Phi Kappa Tau. “I think he gave me the third degree because I had the tattoos. He probably thought I’d just gotten out of prison,” said Proud. Combing through the car, the guard only found a Rolling Stones t-shirt and silently handed Proud his passport back.

With Proud as an exception, tattoos are a common flashpoint between the younger, early adulthood generations and our elders. Parents and grandparents say “you’ll regret that in a few years” and make snide comments about how ink fades or skin sags, but their foremost thought is usually that tattoos are a sign of association with the wrong kind of people. It is true that tattoos have some association with gangs or prisons, but the stereotype that only criminals or other unsavory individuals get inked is completely wrong. Tattoos, piercings and all forms of body art are rapidly gaining acceptance and popularity in all walks of life.

Ancient cultures had many differing views on tattoos. Pagan Europeans were often tattooed with figures or natural patterns, until outlawed under Christianity’s spreading influence. In China and 18th century Japan, tattoos were associated with the barbaric or uncultured. Criminals were marked in many cultures as a means of easy identification or punishment. Other cultures used tattoos as a way of showing achievement and social status. Samoan boys were ritualistically tattooed as a rite of passage into manhood and some in the Philippines held that tattoos could be magical.

Tattoos in America started with seamen seeking ways to establish their identity and therefore American citizenship to avoid impressment into England’s Royal Navy. As popularity of tattoos grew with sailors, they began appearing in the public eye more and more often. By the 1870s, professional tattoo artists were registered in both England and America. Getting tattooed was popular with aristocrats and the rich, until the creation of the tattoo machine lowered the cost of procedures, removing the associated prestige.

Tattoos therefore gained a reputation for deviants and social outcasts. Theories abounded that not only was a tattoo a sign of a criminal but that getting one would in the future lead to deviancy. Getting inked was then highly rebellious, even seeing high regulation and bans in some places on the East Coast.

By the early 1970s, safety regulations had improved and professionals with fine art experience and training had joined the growing ranks of tattoo artists. Despite this newfound safety and talent, tattoos had not yet reached the popular eye, retaining the highly stigmatized counterculture image. Then, rock and roll changed everything. Musicians who embraced their bizarre and extreme self-images were suddenly thrust into pop culture and in part altered the perception of tattoos with their star power.

This rebranding established tattoos as an expensive investment and as expression and reminder of oneself. Aesthetic value is now a central idea when tattoos are discussed. Rather than relate tattoos to a tribe or community, they have become about creating ties to oneself. In the fast-paced lifestyle of the 21st century, many find it necessary to have a permanent reminder of who they are.

“It is far more acceptable today to see people at work, know they’re tattooed and even to see visible signs of the tattoos,” said Manny Contomanolis, associate vice president and director of RIT’s Office of Co-ops and Career Services. “It’s not relevant to what people are doing anymore.”

This view is partially responsible for the large rise in tattoos with nearly 40 percent of Millennials tattooed, according to a 2010 Pew Research Center report. This is a big rise in just a few generations considering that only 15 percent of the Baby Boomer generation was inked. Of the younger generation’s tattoos, 70 percent can be easily hidden by clothing. Some tattoos take a little more effort to hide but of the tattooed population studied, only 18 percent of people said that their tattoos are usually visible.

More celebration of tattoos has arisen through television shows like “Ink Master” or “Best Ink,” where the artists themselves become the promoters of their art rather than celebrities. Shows like Bad Ink and Tattoo Nightmares show off the worst tattoo around, while simultaneously showing off the skill some artists have in covering up bad art with good design. Even making bad tattoos visible helps the public find them more acceptable, especially when they’re in the process of being fixed.

That’s not to say the negative stereotypes of tattoos are gone, merely dulled. Having a tattoo has become more acceptable, but having a visible tattoo in most professional settings is not. You should be “sensitive to how you display your tattoos,” Contomanolis explained. Tattoos on your upper arm or legs are easily concealable and few companies would give you trouble for those. Full sleeves are more of an issue since they are only concealable with a long sleeve shirt. Some of the hardest tattoos to get away with in a business setting are neck tattoos, since they are so difficult to conceal.

Neck tattoos take a progressive workplace to get away with, or a job description that does not involve public relations. Contomanolis gave some more clarification: “There are settings where you’re interacting with the public … and certain tattoos might not be appropriate.” Generally, most companies want to keep a cleaner public image, and that does not involve tattoos. Exceptions exist of course, notably creative groups, where ornamentation can be a sign that you are right-brained.

Careers that do allow for prominent visible body art are fewer than expected. Artists and designers do fine with visible tattoos. Similarly, chefs are often also in the clear, as customers care more about how their food tastes than if you have a full color koi fish on your arm. Contomanolis also believes that technology jobs tend to have internally fostered a neutral disposition toward body art. “[Employees are] valued for their talents above all else,” said Contomanolis. In this industry, people’s skills matter more than their outside appearance.

Slowly, other industries seem to be catching on. In a 2013 Forbes article, Bank of America spokeswoman Ferris Morrison stated that the bank has “no formal policy about tattoos because we value our differences and recognize that diversity and inclusion are good for our business and make our company stronger.” With a large portion of this generation sporting ink, there are more companies beginning to compromise past policies against tattoos for fresh talent.

Speaking generally, if a company doesn’t have hard and fast rules about tattoos, then as long as they are not prominently displayed they will not be too much of a strike against an applicant during a job interview. Visible tattoos are judged on more of a case by case basis. Companies tend to look and see if the tattoo is offensive or distracting, and then let applicable skills speak for themselves. If you are not sure how a company views tattoos, ask someone at the company before the interview.

Before getting a tattoo, make sure to take into consideration the risks of getting a tattoo from an inexperienced or unhygienic artist. HIV and Hepatitis are transmissible if needles aren’t properly taken care of, and infection can set in if aftercare is not properly managed. “Don’t just go into any storefront,” Proud advised. “Choose an artist by referral. I asked two people I knew, and they recommended me to the same guy.” Call the country health department to find records of complaints before you commit to a shop as well.

That is well and good for physical health, but if you end up with a tattoo you hate, it will wear on you mentally. Laser removal is painful and cover-ups may not entirely do the trick so make sure your tattoo can stand the test of time. With a “YOLO” tattoo on the inside of your lip, you might go from culturally relevant to comically regretful in the time it takes to Instagram that new ink.

Because of the meaning behind each of his tattoos, Proud seems to have little to no regret. “All of these have stories,” Proud smiled. “These are all music groups,” gesturing to his left arm, and his right is all his brotherhood. He continued: “on my back, in the center, is my family crest.”

Despite this newfound cultural and corporate acceptance, it is obvious tattoos are not fully in the range of what the public considers normal. After all, with the large percentage of tattoos being hidden, it is apparent that there is pressure on prospective tattoo recipients to choose locations that are easy to conceal.

Tattoos certainly are not the culmination of body art, but they are the most prominent form today. Less permanent means of expression, like colored hair dyes, have become more accepted. Body modifications like tongue splitting, facial implants, saline injections or scarification are still far outside the public eye, and much like tattoos decades ago, are considered extremely taboo for their obtrusive nature. Last decade’s counter-culture becomes today’s culture, but there will always be conservative forces that dislike tattoos or body art to some degree.

This article was featured in the October print issue of Reporter Magazine.