Cans fill the shelves at the FoodShare Center in Henrietta, N.Y. on Nov. 27, 2017. Photo by Pranit Meher

Concerns were raised recently that the increasingly popular RIT FoodShare Center might be demolished — or rather, its home at the Riverknoll Apartments office could be.

The RIT FoodShare program has been around since December of 2014, but the Riverknoll apartment complex which serves as its temporary home is considerably older. The modular apartment complex was built in the 1970s in response to the influx of returning veterans from Vietnam.

“I don't believe that they ever thought that there would be the lifespan of the complex that it is today, because it's probably almost 50 years old at this point. But it continues to serve a need for students and it is one of the most popular complexes,” said Sharon Kompalla-Porter, associate director of the Center for Residence Life.

Riverknoll may be getting a bit long in the tooth, but the apartment complex doesn't appear to be going anywhere anytime soon.

“I have been at RIT for 16 years and there have been discussions about taking Riverknoll offline pretty much that entire time. But according to Kurt Ingerick [executive director of student auxiliary services] there is no immediate plan for that to happen. So at this time there is no discussion of a need to move FoodShare,” Kompalla-Porter clarified 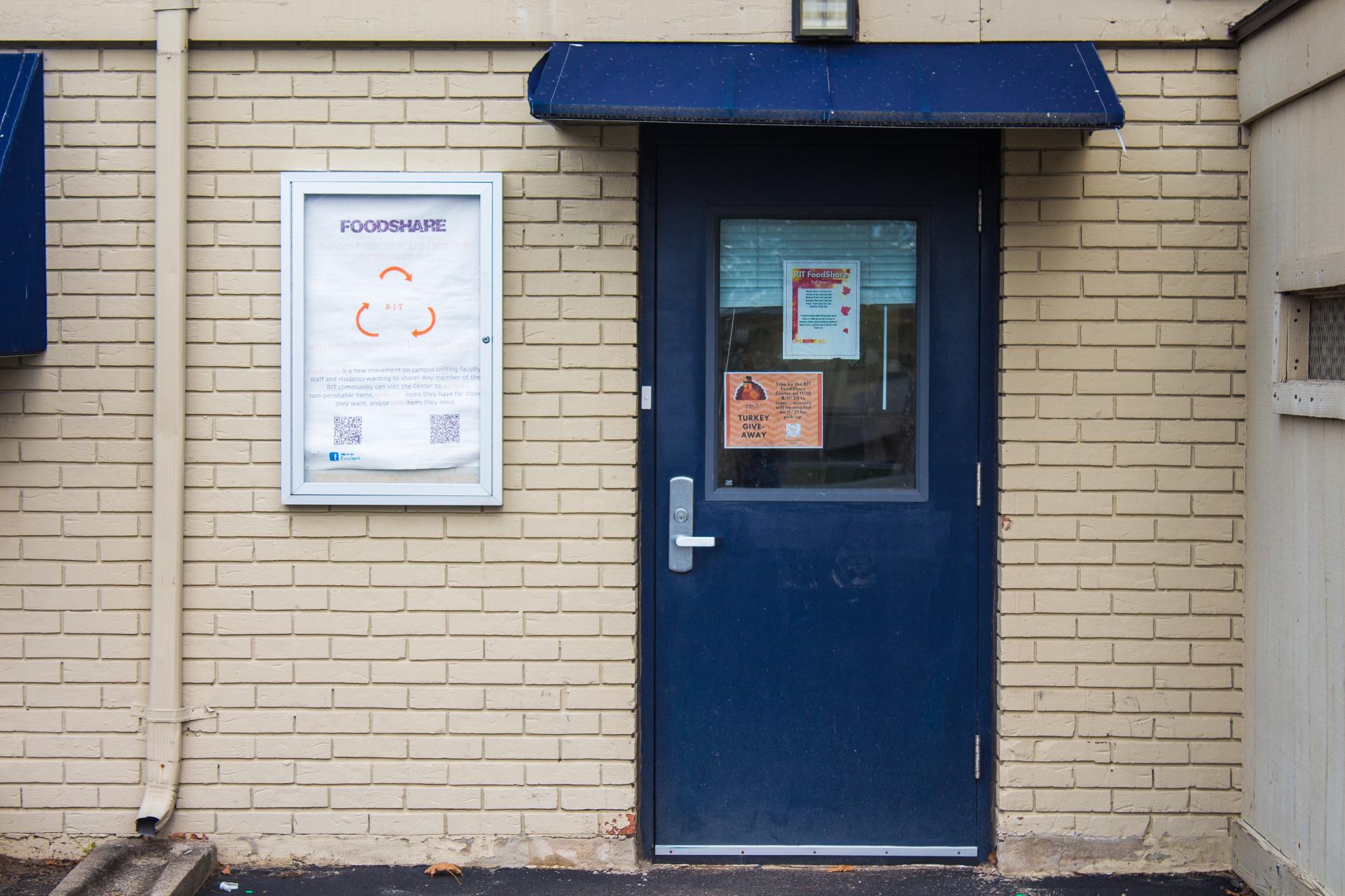 This should be great news for the growing community who both support and make use of the services FoodShare provides. Today, the initiative consists of a physical center which stocks donated food available to any member of the RIT community as well as an online Facebook group where members can post listings of leftover or otherwise free food available for pickup anywhere on campus.

The Center for Resident Life fields both programs with the goal of simultaneously reducing food insecurity as well as food waste on campus. With support from students and staff as well as corporate donors like Palmer Foods, the FoodShare Center at Riverknoll offers non-perishable and often perishable foods like hummus, ham steaks and frozen edamame. Visitors even have access to fresh produce in season from its own garden, tended by the Resident Advisors who staff the center.

The Center's online counterpart, the FoodShare Facebook group, now hosts up to 10 posts a day from users enthusiastic about diverting food from landfills to hungry mouths. The program is maturing rapidly, but it grew out of a simple idea.

“The impetus for it was Rebecca Johnson. She was concerned with all of the food that she was seeing at campus events that was being thrown out. So she brought that concern to Enid Cardinal who said it would be great if we could figure out a way, from a sustainability perspective, to address this concern,” said Kompalla-Porter. Enid Cardinal, RIT's senior sustainability advisor, brought this idea to Kelly Norris Martin, a professor in the School of Communication who put students in her Campaign and Marketing class to work on the idea. The class delivered a solution in December of 2014.

“We got an opportunity to work with Kelly and her class and they launched the first part of the program ... that is the Facebook group that is in existence today. We have almost 3,000 members,” Kompalla-Porter said. “2,999!” Rohan Patel chimed in. Patel, a second year graduate student studying Human Computer Interaction, is the graduate coordinator of FoodShare Center.

"The idea behind FoodShare was to create a culture of sharing."

Kompalla-Porter and Patel are both visibly excited when talking about the work they do with the FoodShare Center, and they have every reason to be. They, along with many others, are working hard in pursuit of a mission they believe in.

“The idea behind FoodShare was to create a culture of sharing ... You know, take what you need, share what you have. We were trying to bring that culture to RIT. Now it's just embedded in the culture,” Kompalla-Porter said. Following the success of the Facebook group, Cardinal, Johnson and the School of Communication partnered up with Resident Life to launch the physical FoodShare center at Riverknoll in April of 2015 in order to provide more steady support for students struggling with food insecurity.

“And we have been going strong ever since ... Last year alone we had over 3,500 visits to the FoodShare Center and over 706 unique individuals come through and use it,” stated Kompalla-Porter.

This year, the RIT student body numbered just under 19,000 students. That means almost 4 out of every 100 students on the RIT campus may be struggling to find their next meal.

Sometimes, people assume that students who can afford RIT’s high tuition costs can also afford to eat. Kompalla-Porter explained that this isn’t always the case. “Yeah, they can pay their tuition because they're probably scraping together grants, scholarships, loans, you know, everything that they can do to pay for the tuition — but then maybe food and housing are an afterthought,” stated Kompalla-Porter.

In order to better understand the sometimes invisible population they serve, the FoodShare center collects aggregate data on its visitors, which includes a voluntary survey sent out to new users.

“We get some anecdotal comments on our survey that students will tell us, 'I didn't know where my next meal was coming from if I didn't have this initiative,' or 'This really helped me to supplement what I was able to afford so that I could have a pretty steady stream of food.' So we know that for some students this is a real need and if it didn't exist, I'm not sure where they would be looking for their help.” Kompalla-Porter continued.

The champions of the FoodShare Center aim to ensure that hungry students in need don't have to look any farther than their own community for help. It appears that they've done a good job so far. So good in fact, that other schools are starting to notice. When FoodShare was founded, RIT joined the College and University Food Bank Alliance, or CUFBA, as their 149th member. Only a few years later, the organization has over 500 members, including newcomers in the area who are looking to RIT as an example.

“Hobart, William Smith, University of Buffalo, University of Rochester, MCCC — these are all schools that have reached out to us for advice on how to set up a pantry ... it's nice that RIT has been doing this for quite some time and that we can step out there and say this is what we're doing on our campus and here's how we can help you do it too,” Kompalla-Porter said. 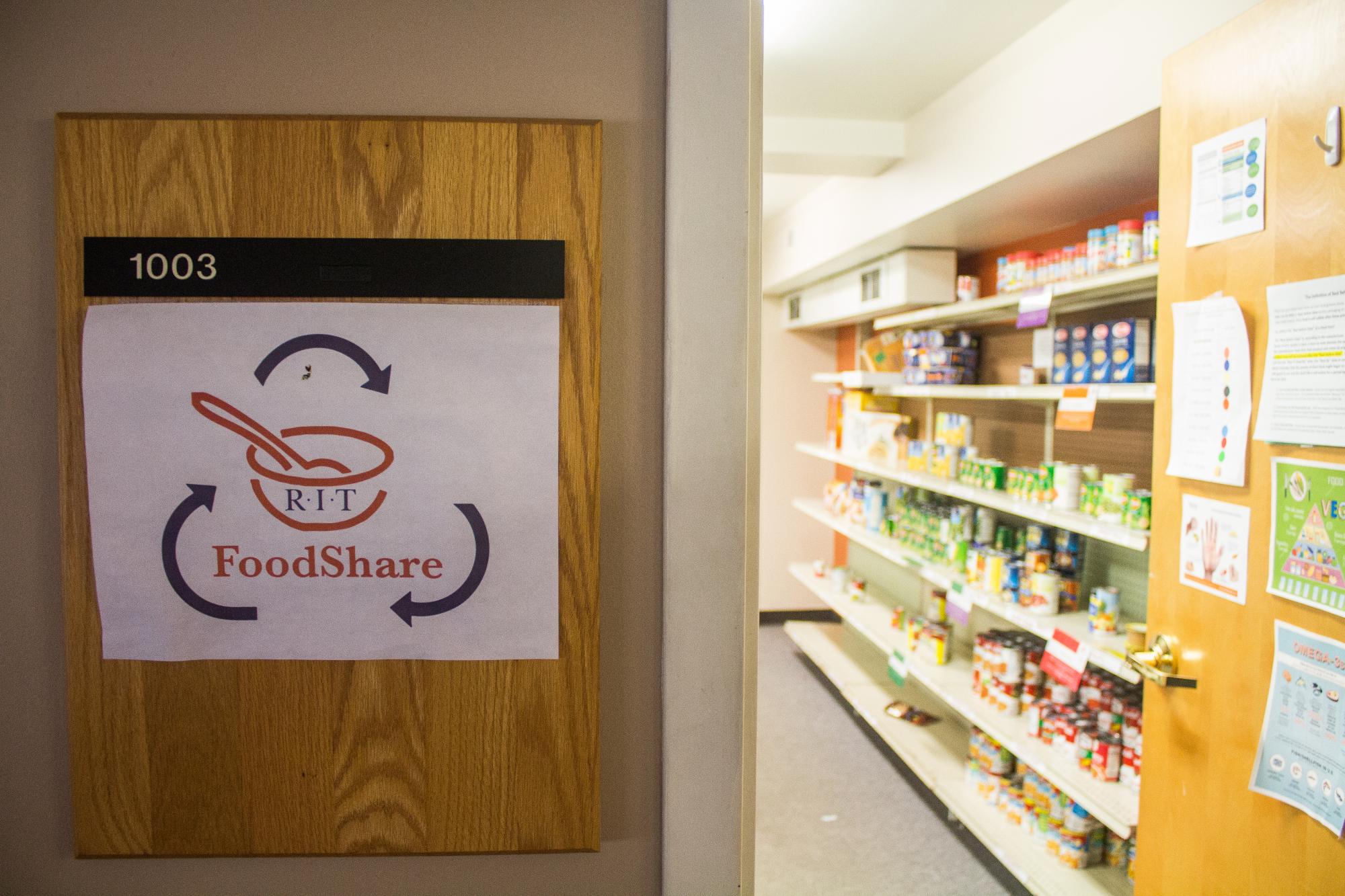 Looking to the Future

As successful as it is, the FoodShare initiative is still evolving as it matures. Leadership is continually looking to expand the center's offerings, improve its understanding of members of the RIT community in need, and strengthen its partnerships with like-minded groups.

According to Patel, one initiative in the works is a partnership with the Student Dietetic Association and the Better Me Wellness Center aimed at offering healthy recipe cards and even a food safety Youtube channel for FoodShare visitors. The program is also looking to cement its ties to "Goodbye, Goodbuy!" a program that has grown up in close association with FoodShare.

“'Goodbye, Goodbuy!' is a waste diversion program. What we do is at the end of Spring semester we collect any reusable items, we store them for the entire summer, and before the school opens in Fall, we have a huge sale where you can pretty much get all of these reusable items for a very affordable price,” Patel said.

During finals week of Spring semester, student captains man collection points near dumpsters at all major RIT housing sites in order to collect any and all reusable items, like furniture, appliances, backpacks, etc that students moving out would otherwise have junked. Last year, the program diverted about 35 tons, or 70,000 pounds of goods, from the landfill.

Some of the collected items go immediately to charities in the area, and the rest are stored for the summer before being put on sale the week before the start of the following Fall semester. Proceeds from the sale are used to fund the costs of the program, and any additional profit goes toward funding other sustainability initiatives on campus.

The program was born at around the same time as FoodShare when Kompalla-Porter and some of her students brought the idea back with them from a conference at Cornell. “It had been an initiative on some New York City campuses that was thriving and we thought, 'Wow if we had a location on campus where people could bring the things that they no longer had a need for, and students could come to that and take the things that they now needed, wouldn't that be cool?'” Kompalla-Porter said.

“Ideally if FoodShare and 'Goodbye Goodbuy!' sat together and if Goodbye also finds a place that's around for the entire year instead of just being offered at the end of Spring semester and the beginning of Fall semester ... that would be really helpful for students,” said Patel.

Needless to say, these efforts are no small undertaking. Patel and Kompalla-Porter are quick to thank everyone from university executive leadership to staff employees, from student and corporate donors to willing volunteers for the success of the programs to date and going forward. “There's no possible way we could still be in existence from 2015 to now if we didn't have the support of the community ... It's all donation-based, and that's huge,” said Kompalla-Porter.

Any member of the RIT community who would like to join the FoodShare Center's ongoing efforts to reduce food waste and food insecurity on campus can volunteer their time by transporting donations from collection points, organizing or decorating the center, designing brochures and fliers or tending the raised bed garden.

Students can also donate goods themselves, or raise awareness by telling their friends about FoodShare and joining the RIT FoodShare Facebook page to post notifications of free food left over from events on campus. Stop by the apartment office at 113 Riverknoll or send an email to RITFoodShare@rit.edu for more information.