You walk into class and take a seat. When the professor begins lecturing, you observe in the front of the room that there is someone communicating in a way that you may never have seen before setting foot on RIT's campus. Regardless of your previous exposure and level of understanding, at some point during our careers at RIT we are all bound to encounter an interpreter in class. Yet who interpreters are and the details of what they do might remain a mystery to some.

With over 1,100 deaf and hard-of-hearing (HoH) students on campus, communication access is crucial so every person enrolled at RIT is able to get the full education they came here for. NTID’s Department of Access Services (DAS) provides a variety of educational access options, including notetaking, real-time captioning and interpreting. Out of all higher education, DAS is the largest employer of interpreters.

“We have about 135–140 staff interpreters, then we bring in another 75 or so freelance,” said Wayne Kip Webster, a manager at DAS.

The primary goal of an interpreter is to provide equal access to communication for all parties involved in any given conversation.

Christy Smith is an associate interpreter who has worked full time at RIT since 2010.

“[The goal is] to facilitate conversation between groups of people, to be professional, and to be worthy of the trust and confidence that is placed in you by nature of the role,” Smith said.

Both deaf and hearing consumers have to have confidence that what is being said is accurately being communicated to the receiving party.

“It’s a natural part of the role. People have to be able to trust that I am actually communicating what is intended, that I am going to do a good job and that I’m not going to break their confidence,” Smith remarked.

Keeping that trust and confidence alive is key, especially when the education of students is at stake. As an interpreter on campus for 28 years, Sarah Jacobs is well versed in the gravity of her role in the educational setting.

“Access to information. That’s our primary goal in education is to make those lectures accessible to all the students that we’re working with, so my goal is to provide the communication that best matches their needs so that they can succeed,” Jacobs explained. “I think of myself as part of a communication team. There’s myself, the professor, the student and perhaps the captionist. We’re all working together toward the same goal which is [that] you get, apply and learn the information [to] succeed in your coursework.”

But how exactly do interpreters go back and forth between the two languages to get that information across? 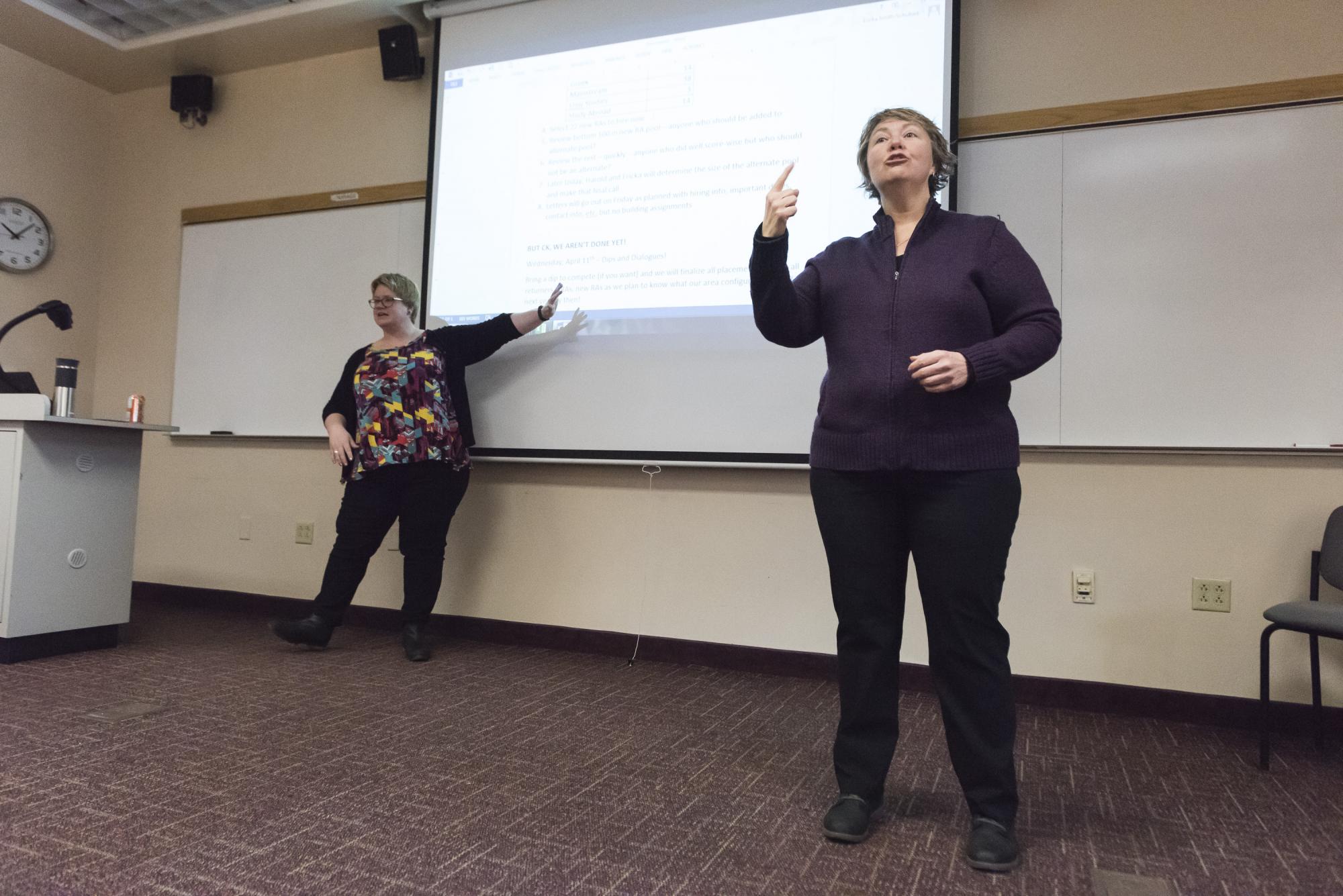 While it may look seamless to the untrained eye, interpreting is much more complicated than one might assume.

"You’re taking one idea and changing it to another form of the same idea in a different language,” Smith said. “Oftentimes, as we’re taking in a message, we’re trying to wait until we have as complete a thought as possible so that we can get this full piece of information, and then change the form and put it back out there so that the meaning stays the same in either direction.”

“It’s as simple and complex as you think. Teacher speaks, I typically wait one sentence to get a head on my shoulders of what we’re talking about, and then I’ll put my hands up and honestly just try my best and see where it goes," added Connor Murray. Murray is a fourth year ASL-Interpreting Education (ASLIE) major and student interpreter.

A common misconception is that changing from English to ASL is just a process of translating word-for-word, but there's a reason it's called interpretation instead. Just like English and Spanish differ, ASL has a unique set of grammar rules and vocabulary that is different from English. Facial expressions and body movement convey in ASL what tone of voice conveys in English, all factors interpreters must consider when going between the two languages.

“The complexities of things that are happening in an interpreter’s mind would blow people’s minds,” Jacobs said.

She gives insight as to some of the many mental dialogues taking place.

“When I’m going from English to ASL, I’m listening for a host of factors. I’m listening for concepts [and] for keywords that the professor will use that I get a sense is important to emphasize,” Jacobs said. “If there is something in their tone of voice I notice, I want to convey that as well ... I’m thinking about all of those factors I have to convey on top of the actual message, lecture and appropriate sign choice ... Do I need to spell that word because it’s a proper noun? Do I need to work with the students to develop a sign to represent that word because I know it’s going to come up often?”

Interpreters also have to have good situational awareness. More specifically, Deb Cooper, an interpreter at RIT for 20 years, discusses what different things might be rolling through her head when interpreting in a math class.

“If I’m in a math classroom, then I am watching the professor write on the board, listening to what they’re saying, and in my mind putting together ‘what are they saying that is not being represented on the board?’ and then getting that information to the student,” Cooper said. “At the same time, I’m using my eyes to guide the student to look at the board, and when I’m ready to tell them something that’s not up there, I’m shifting back to be able to be engaged with the student again.”

Though the specific processes going on in an interpreter’s mind may be difficult to comprehend as someone on the outside, the mental strains of interpreting are immense.

“If you talk to a neurobiologist, they’ll tell you that what we do is impossible because we are working in two languages simultaneously,” Jacobs remarked.

“If you talk to a neurobiologist, they’ll tell you that what we do is impossible."

Smith explained how a breakdown of information can start to happen after a certain amount of time.

“The interpreting process itself is very mentally demanding ... If you don’t have breaks, after about 15–30 minutes — depending on the complexity of the information — the process starts to break down in your brain and you’ll start missing things without realizing it or putting things together incorrectly or adding things and you don’t even recognize it,” Smith said.

This is why having a process called “teaming” is rather important. 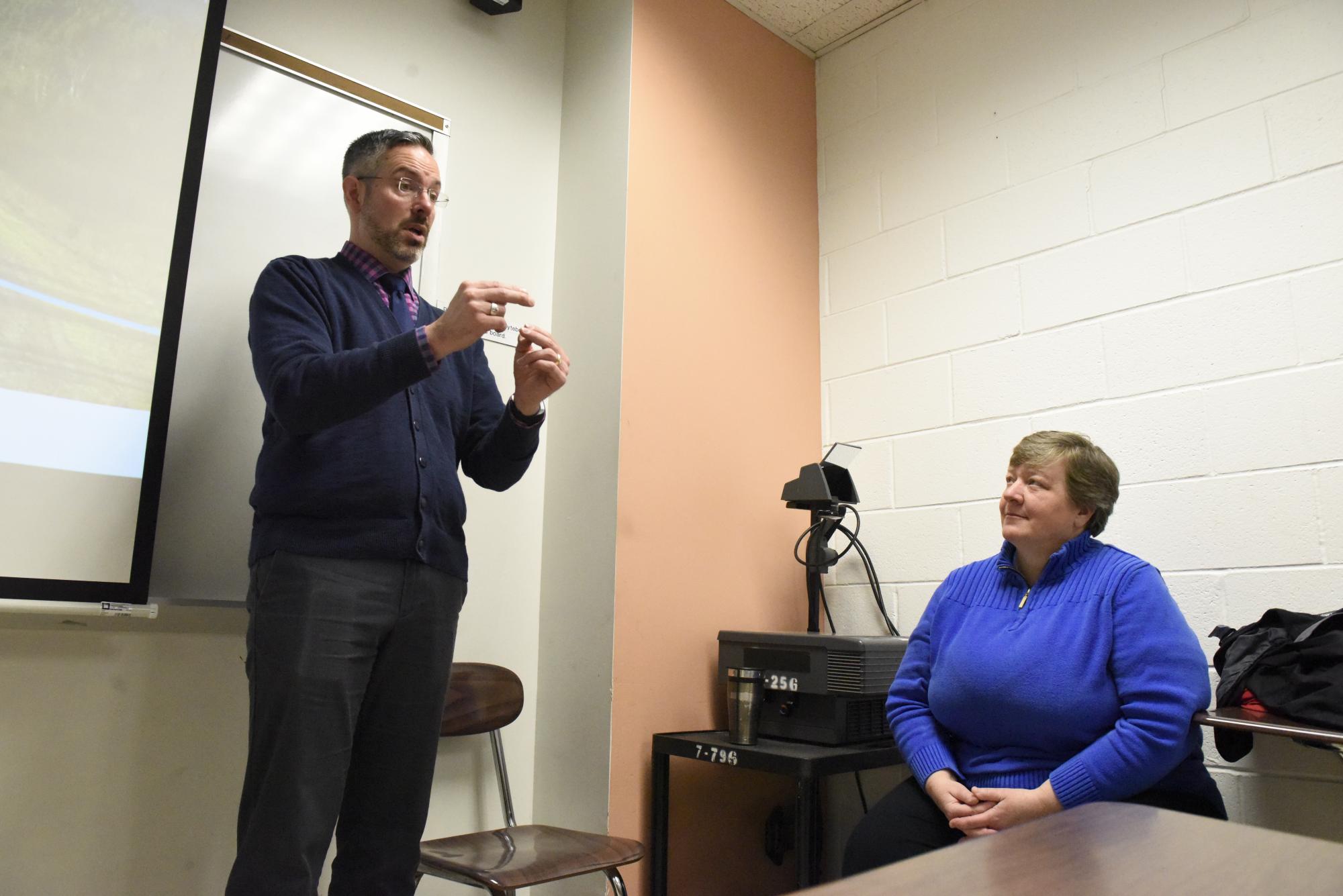 There's No I in Team

You may have noticed that interpreters typically come in pairs. Every 20 minutes or so, the interpreters switch out. But even though they are no longer front and center, the inactive interpreter is still engaged in the conversation.

“Why is it better to get a second doctor in the room to review someone’s case?” Murray asked. “It’s the same way — maybe the second doctor will pick up on something that the first doctor didn’t pick up on that’s vital. Same thing for interpreting. Sometimes … [I don’t] notice when I’ve messed up something here but another interpreter will pick that up ... To have the most coherent message, I would say, a team is needed.”

Cooper explained how she's able to feed her teamer important information that they might not be able to access were it not for her in the off-chair.

“In the current setting I’m in where they talk about the body, the professor will talk about something on the screen very quickly and make reference to it, so if I’m in the ‘off-chair,’ I’m able to point to that body part and give specific information about where it’s located.”

“All of RIT’s classes are typically teamed because of how content-heavy and complex they can be ... you need a team,” Murray said. “My challenges come from content ... if I just don’t understand something or I get lost or jumbled — that’s again a perfect time to utilize your team.”

"They say a change is as good as a break or a rest. You’re able to change roles, take a break, your brain kind of restarts and then you can keep going,” Smith said.

Interpreting can be just as exhausting for the body as it is for the mind, making teaming all the more important.

“Those physical ... demands are often not seen by onlookers because it just looks so fluid and effortless, and yet my mind is processing two languages, and then I have to tell my body to do that. If you consider holding your arms up for 20 minutes at a time, that’s a lot of load on your upper body ... it’s a very fatiguing job,” Jacobs stated.

“The cumulative damage to your muscles and joints can be really bad — it can become debilitating for interpreters. Working with a team gives your body a chance to just rest and heal for a little bit,” Smith added. 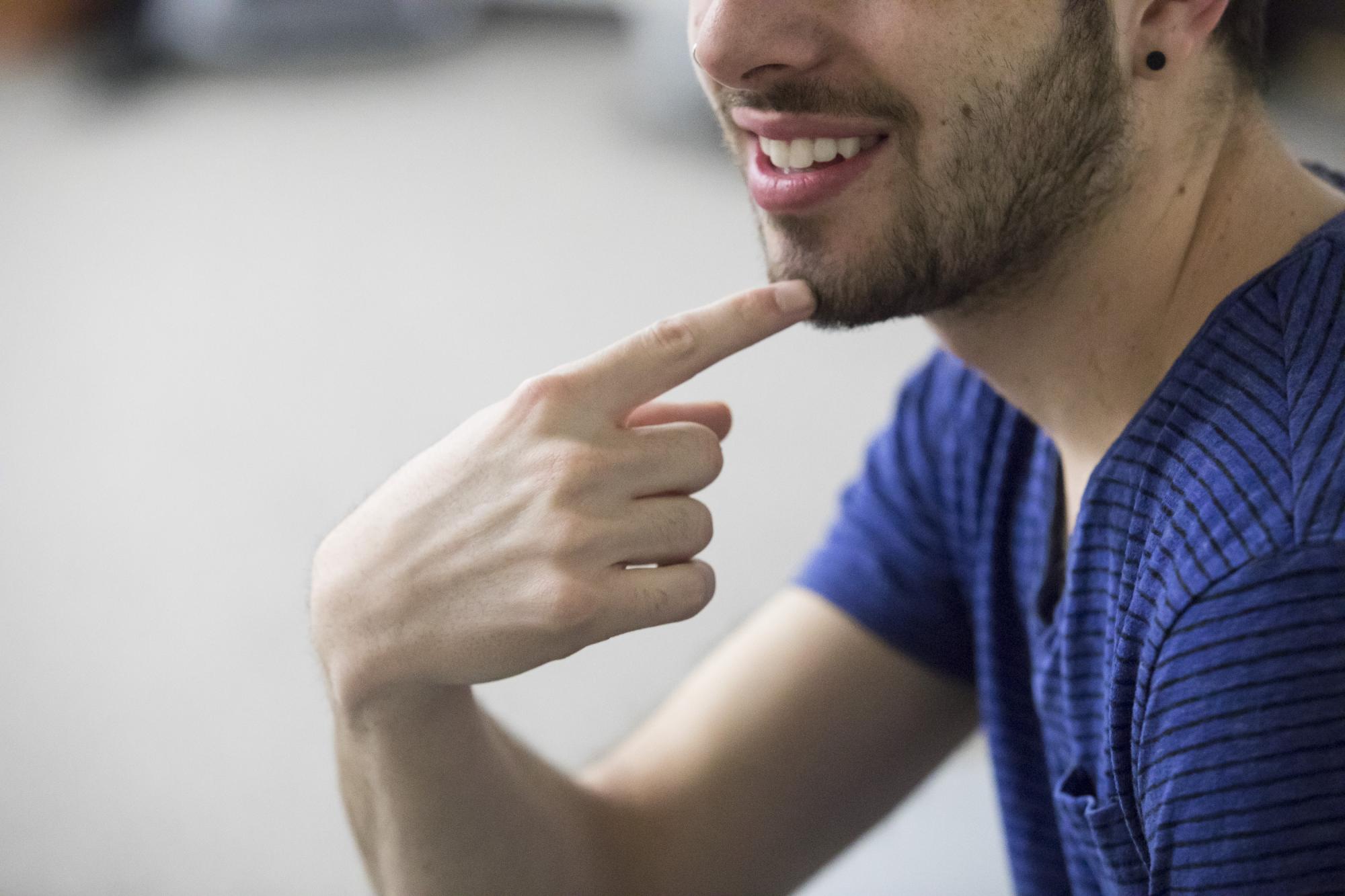 A Passion for Interpreting

Even though the job is incredibly physically and mentally demanding,

To see that when I sign, I get the head nod, or that when I voice, this person actually understands — that’s the best,” Murray expressed.

Even after 28 years, Jacobs doesn’t tire of her job and finds every day to be a new adventure.

“I love what it does to my brain, too. Usually at the end of the day my brain feels like scrambled eggs, and I have nothing left. But the process of putting things together is like working on a puzzle while racing the clock,” Smith described. “It’s a creative process and it’s very engaging, it takes your whole brain to do the job if you’re doing it right.”

"The process of putting things together is like working on a puzzle while racing the clock."

“I enjoy the fact that here ... the students are just so amazing and do so many amazing things and I’ve just had a little part of it,” Cooper said, smiling. “I love what I do.”