Beyond the Base: From Service to Scholarship

At the end of high school, every student faces a major decision: what do I do next? For some, going to college is the right path to take. For Ryan Carpenter, Matthew Altobelli and Carlos Garcia Tapia, it was joining the military. 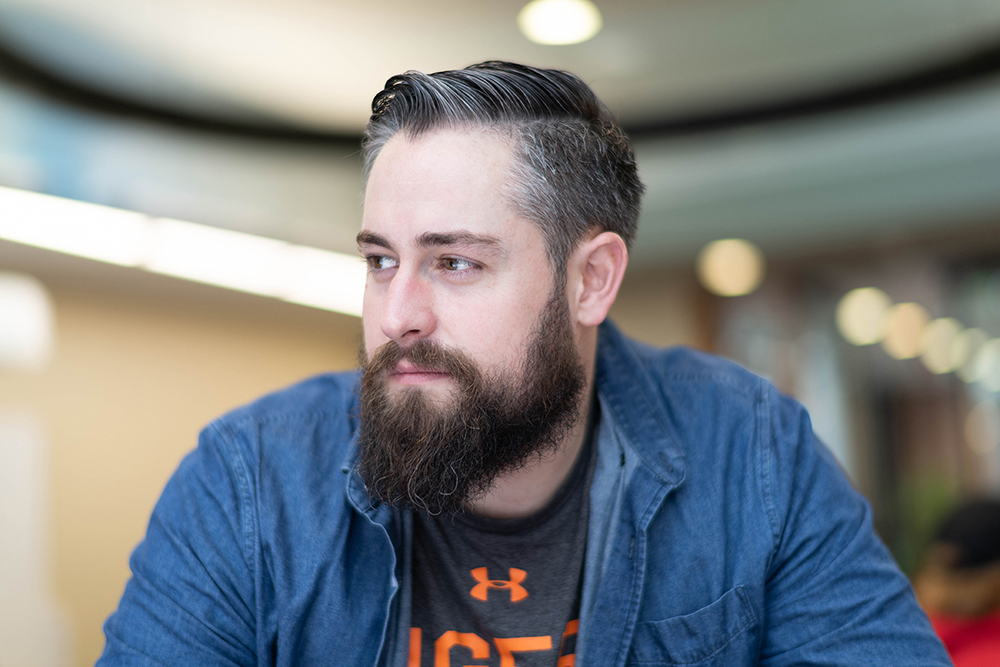 When Ryan Carpenter, 29, first graduated high school, he went to college on a football scholarship. He played ball and partied, but left after just one year. Not knowing what his next step was, the now fourth year Management Information Systems major got a call from his friend in the Navy.

“He called me one day from Japan and was like, ‘Dude, go to the recruiting station, you’re missing out,’” Carpenter said. “He was like, ‘This is the best choice I ever made.’ That was kind of what tipped the scale for me.”

Carpenter trained as a Special Warfare Combatant-Craft Crewman (SWCC) at the beginning of his Navy career. His most memorable and defining experience was for SWCC training during hell week. Hell week, Carpenter said, is seven days straight of high-stress, high-speed environments with minimal sleep and intense physical and mental evolutions that boil a person down to the core of who they are.

“I take a lot of what I experienced in hell week and I carry it with me every day,” Carpenter said. “You go from moments of hallucinating to crying to laughing to just pure defeat. In [hell] week alone, I dislocated a shoulder, broke a finger, had a sliver [of wood] go all the way through my finger, I had hypothermia — I think that’s it.”

“You go from moments of hallucinating to crying to laughing to just pure defeat. In [hell] week alone, I dislocated a shoulder, broke a finger, had a sliver [of wood] go all the way through my finger, I had hypothermia — I think that’s it."

Shortly after SWCC training, Carpenter switched to aviation where he spent the majority of his four-year military career working as a structural mechanic, plane captain, flight operator and more.

“At one point, I was the most qualified [and experienced] plane captain,” Carpenter said. “I was the one who got to deal with all the emergency procedures when everything was going wrong. So I got to deal with some pretty intense, pretty high-stress environments.”

But after a few years, Carpenter reached a point where he wasn’t happy and wanted to do more. He left the military and worked as a salesman and insurance broker before getting laid off. That’s when he decided to go back to college. Once he has his degree, Carpenter hopes to circle back to the military as a contractor or go into an intelligence agency.

“I enjoyed my time [in the service] and I believe in what they do and I know the work they put in … I just always loved the high-speed environments and that’s what I want to be in,” he said. 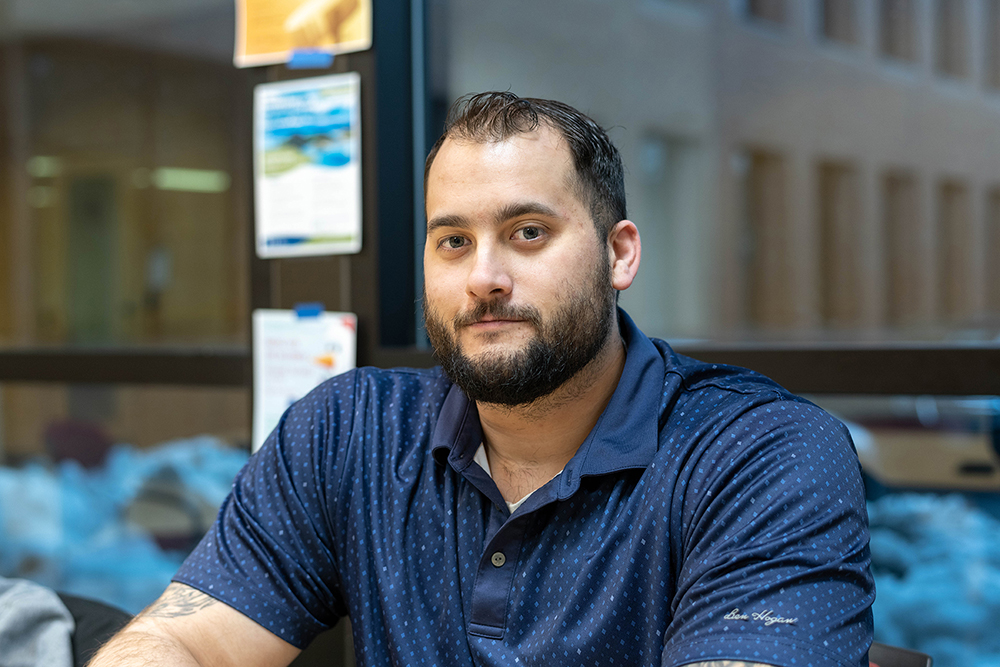 Fourth year Psychology major Matthew Altobelli, 31, met with his counselor in his senior year of high school to discuss postsecondary options, but was unsatisfied with her suggestion to start out in community college.

“One of my friends was joining the Air Force and he was like, ‘Why don’t you come and talk to my recruiter?’" Altobelli recalled. “So I did and that seemed like the better option.”

Altobelli spent most of his eight years as a weapons specialist working on A-10 planes and helicopters for combat search and rescue. Toward the end of his military career, he received orders to join a unit in Las Vegas. His daughter was six years old at the time and told Altobelli she didn’t want him to leave again.

“She got really sad when she found out that I had to go,” Altobelli said. "I canceled my orders the next day and instead of reenlisting I got discharged for her.”

While still in the Air Force, Altobelli got certified as a personal trainer and nutritionist with the ultimate goal of opening up a gym. He and a friend ran a successful training business for a period of time before it eventually closed down. Three other business ventures later, Altobelli decided to attend RIT to pursue a degree in psychology.

Among other things, Altobelli has post-traumatic stress disorder (PTSD). He had an episode where he disassociated, which is a psychological occurrence where people feel disconnected from their sense of self or sensory experiences, according to Verywell Mind.

“My brain literally shut down my body,” Altobelli said. “I could see everything that was happening, but I couldn’t move, talk or anything like that .... That was the first time I realized how powerful our brains actually are.”

This experience led him to choose a career in psychology. Currently, he’s applied to multiple Ph.D. programs hoping to further his studies.

“My overall goal is to help other veterans with PTSD,” he said. “[I want to] try and reduce the amount of veterans who take their own lives because I’ve been there, so I know how it feels. I don’t want anyone to be there.” 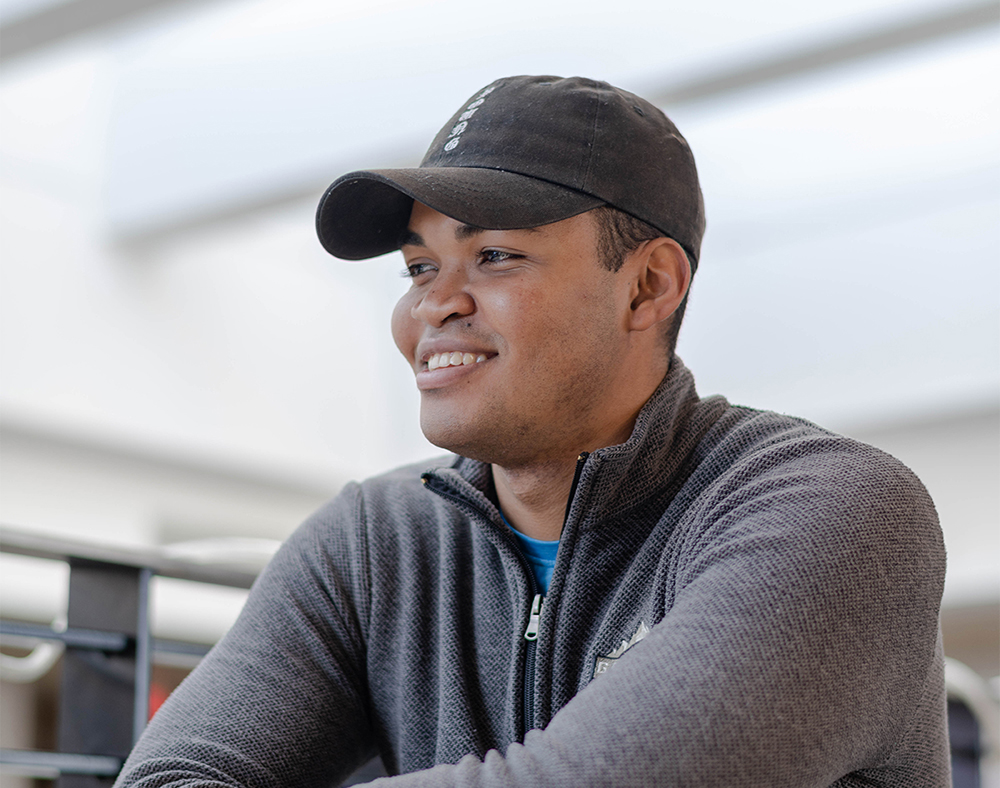 Joining the Army had been on Carlos Garcia Tapia’s mind since he was a kid. Garcia, 25, enlisted in the Army out of high school before coming to RIT as a now third year School of Individualized Study student with concentrations in Military Science, Exercise Science and Computer Arts and Technology.

“Every single male in my family is in the military, so it’s a lineage thing,” Garcia said.

Growing up in Puerto Rico, Garcia said his biggest goal was to live in the U.S. After finishing all of his Army training, Garcia was sent to Germany before moving again to combat zones and other bases around the globe.

“Every time we moved it was shocking ... from Germany to Kuwait to Iraq to Italy to Spain to Alaska,” he said. “It was just a lot of moving so I would say that was what really impacted my life.”

Garcia worked primarily with pilots as an aviation operations specialist communicating via radio, managing their flight records and keeping track of all their certifications. With five years of service behind him, Garcia left active duty to join the National Guard and Army Reserve Officers' Training Corps (ROTC) while also earning his degree.

“[With] ROTC, I can do my degree and get my commission at the same time instead of just doing my degree and then going to OCS [Officer Candidate School],” Garcia said.

Garcia will graduate in 2021 and plans to return to Army active duty as a commissioned officer.

“Being prior service, it gives you the confidence of getting here [ROTC] and not being scared, not overthinking about the military, not doing all this research and questioning, ‘Oh I don’t know how the military is going to be, is this really my track?’” Garcia said. “If I hadn’t been prior service, I would’ve had a lot of doubts because I don’t know the bigger picture yet.”

“Being prior service, it gives you the confidence of getting here [ROTC] and not being scared."

From Military Life to College Life

Carpenter, Altobelli and Garcia spent the first part of their adult lives dedicated to serving their country. Since coming to college, they’ve found that there are certain advantages and disadvantages to being a prior service college student.

Carpenter’s greatest takeaway from the military was his communication skills. The military is the “only environment that you can speak your mind in and not get slapped across the face,” he said, which differs from the civilian sector. Despite sometimes struggling with these cultural differences, Carpenter found that he is able to talk to people from all walks of life.

Looming deadlines, tests and finding a balance between life and school can all be major sources of stress for the average college student; but, thanks to the military, Altobelli learned how to manage his time well and deal with these stressful situations.

“I really do think that I’m better equipped than most to handle the stress of college because I’ve been through much more stress than college,” he said.

Carpenter concurred. “Life is bigger than a test ... There’s going to be tomorrow, there’s going to be a future and a career. Don’t waste your time being hung up on something that’s done and over with, that you can’t fix.”

Just like college students have different majors, people in the military each have different jobs. As both Army prior service and an Army ROTC cadet, Garcia feels like sometimes the bar is set too high. ROTC focuses mainly on infantry tactics, Garcia explained, so coming from an aviation background he found himself starting from scratch.

“There are certain moments in studies or [ROTC] lab sessions where everyone just looks at you expecting that you’re going to be the one spilling the knowledge and you’re there like, ‘I haven’t dealt with this.’ There’s this unrealistic expectation of you sometimes,” he said.

Likewise, Altobelli said there are aspects of being a veteran that aren’t adaptive to civilian situations.

“One day I had to be late for class because I had a doctor’s appointment. I got there and someone took the seat I usually sit in,” Altobelli recalled. “That seat faces the door and I was forced to sit in another seat that didn’t face the door. I couldn’t pay attention the entire class.”

Advice to Fellow Prior Service Students

The decision to come to college isn’t always an easy one when it means transitioning back to student life. Altobelli used to think college wasn’t worth it because many times, you go into debt to get a job. Since changing his mindset, Altobelli learned that college is so much more than just school.

“[College] gives you a sense of purpose,” he said. “I’m a disabled vet and ... I get paid enough to where if I wanted to, I could just do nothing and I’d be fine. But that’s not really a good life, it’s not a life of purpose.”

“I could just do nothing and I’d be fine. But that’s not really a good life, it’s not a life of purpose."

Garcia encourages his fellow prior servicemen to continue giving their best no matter how good or bad things are going. College is the time in life that will either set one up for failure or success, he said, but it’s up to the individual to set their own course.

To other prior service students, Carpenter said to continue onward.

“This [college] isn’t half as hard as what we’ve dealt with in the military, no matter what you did," he advised. "Ultimately it’s going to be worth it in the end. Suck it up, embrace the suck and just keep moving."