The tunnels on the academic side of campus that connect Thomas Gosnell Hall, James E. Gleason Hall, Liberal Arts Hall and the Wallace Library have become a space where graffiti is tolerated, if not tacitly encouraged. It’s certainly entertaining to read the thoughts, feelings, and artistic expressions of every passerby with a pen who has walked through those tunnels, but could there be a deeper meaning lurking under the surface?

In fact, when you take a closer look at the graffiti, it becomes very clear that RIT students are using the tunnels to communicate with each other about certain sensitive topics. As a space that is both anonymous and largely immune to censorship, the tunnels have become a place where people can feel free to discuss information that has been systematically covered up by the cabal of powerful organizations that secretly and completely control every aspect of our world. That’s right, I’m talking about the Illuminati, the Freemasons, George Soros, the Deep State, Ronald McDonald, Big Pharma, NASA and all the other institutions all vying to create their own New World Order. The graffiti in the tunnels is clear proof that RIT students just aren’t buying our government’s constant lies about the evil actions of these organizations.

For example, take a certain section of pipe in the tunnel between Liberal Arts Hall and Gleason Hall, where someone has written the word “wiener.” Sure, maybe the person who wrote this was just inspired by how funny the word “wiener” is. But think about it — “wiener” is a German word. The Illuminati originated from Bavaria, a federal state of Germany. Is this a simple coincidence? No, that's impossible. Coincidences don't exist.

Is this a simple coincidence? No, that’s impossible. Coincidences don’t exist.

What about where someone has written “I’ve seen more spine in jellyfish?” This is a clear reference to the fact that the fluoridation of our water is causing jellyfish to literally grow spines. Don’t bother trying to Google that. You won’t find anything, not because it’s not true, but because NASA has already scrubbed the internet of this fact so that they can continue to poison the American populace to keep them compliant. (Not me though, I haven’t had a sip of water since 2008.) 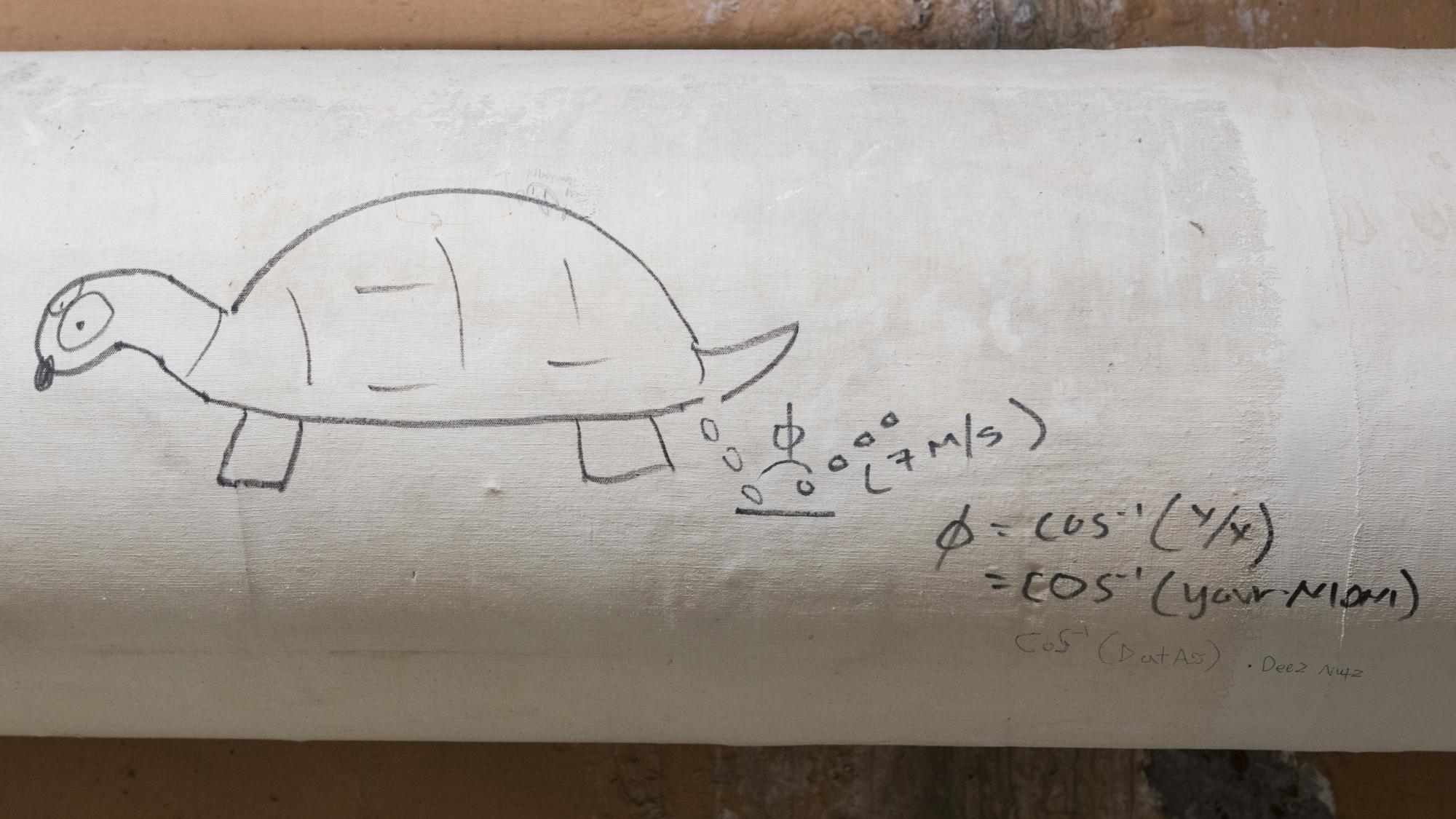 The examples are countless. There’s a drawing of a turtle pooping which is a clear reference to alien abductions — look at the way the turtle’s poop rises from the ground as though it’s being sucked in by a tractor beam. Or the sentence “Press button for m&m’s,” where “m&m” clearly stands for “Moon-landing Malfeasance.” Or the sentence “YIFF IN HELLICOPTERS,” which is obviously a reference to Earth’s flatness, since the so-called “curvature” of Earth is invisible even from the helicopter in which the viewer is yiffing. “Skate fast, eat ass” is a reference to Pizzagate. And so on, and so on, and so on.

Clearly RIT’s students are very aware of what is going on in our world today and, frankly, I’m so proud of us. Now I’m off to the tunnels to draw a dick that represents who really killed JFK.