The first match (Nov. 9) featured a special sold-out game. A select number of  free tickets were given out to students before the match. This was the second time the Gene Polisseni Center had been sold-out.

Turning the Losses Around

The RIT men’s hockey team had a difficult time on the road against the Mercyhurst University Lakers on Nov. 2 and Nov. 3, 2018. This week, the team understood that a better result was critical, despite being only in the first full month of the season.

Before the games this past weekend, second year Business Exploration major and forward Jake Hamacher had some thoughts on how the team could turn around from the previous bad result.

“I think the biggest [issue] is we just need to up our compete level and be stronger on our sticks. We need to start getting high-quality chances,” he said. “I feel right now we are getting too many perimeter shots. We need to get bodies and pucks to the front of the net.”

Hamacher scored twice during the previous match with Mercyhurst.

Third year Business Marketing major and defenseman Adam Brubacher felt that the defense was going to contribute to the scoreboard..

“I think is been a little bit frustrating this season so far, but I think it will be beneficial this weekend if we can get as many shots [on the net] and hopefully one of those finds the back of the net,” he said.

“I think is been a little bit frustrating this season so far, but I think it will be beneficial this weekend if we can get as many shots [on the net] and hopefully one of those finds the back of the net.”

The Sea of Orange Swallows the Yellowjackets

The first match started out quickly when second year Business Management major and goalie for RIT Logan Drackett made a game-changing save during a penalty kill. 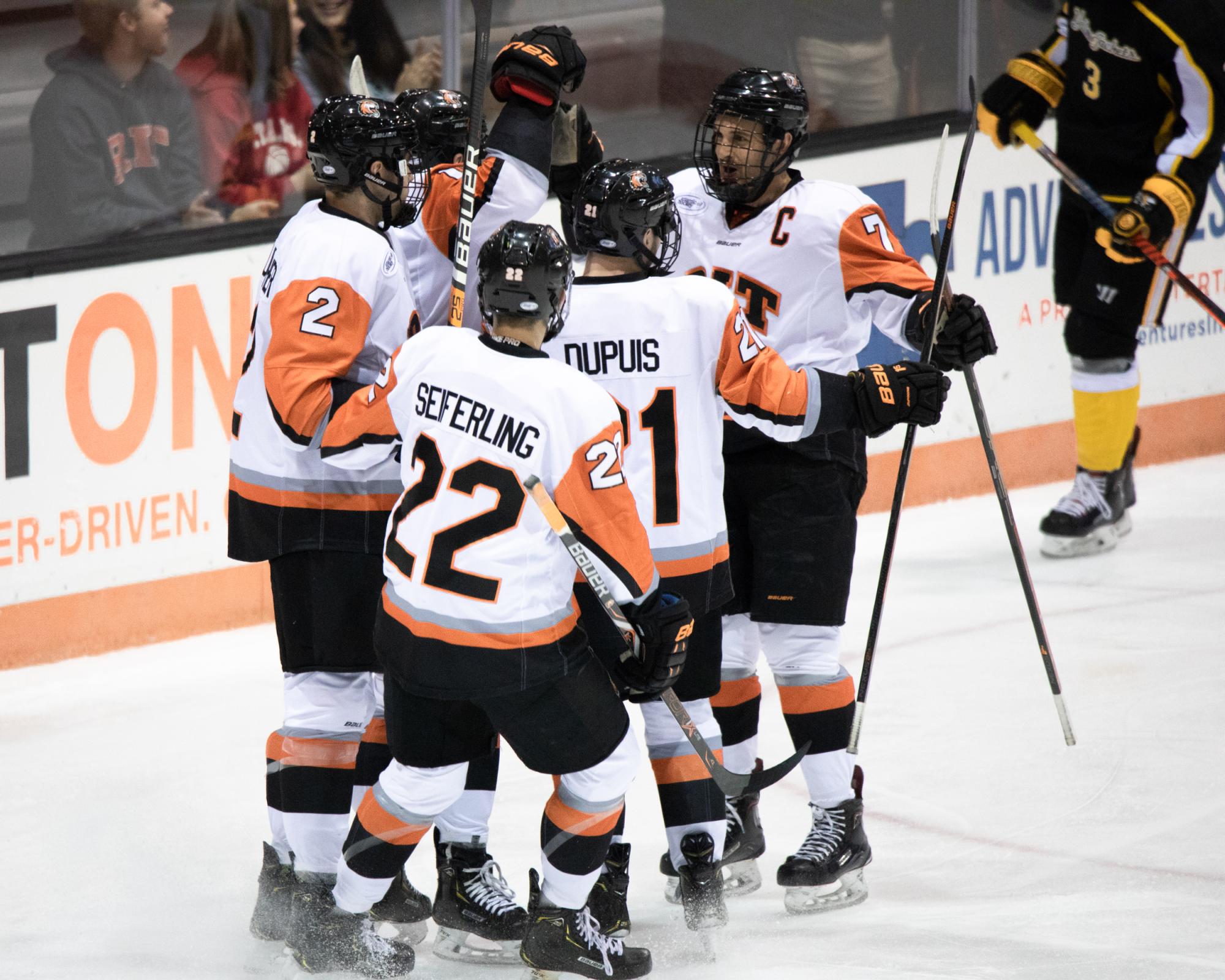 According to RIT Athletics, it wasn’t until late in the first period when the Tigers struck first. On a penalty kill, second year Civil Engineering Technology major and forward for RIT Alden Dupuis scored on a 2-on-1 opportunity.

The start of the second period was exhilarating, as Drackett came up big for RIT again, this time saving a break-away chance. He turned the glove and stunned the AIC forward.

At the end of the second period, the game remained 1-0 in the Tigers favor.

The Yellowjackets hit the ground running at the start of the third period, scoring with just under five minutes in. Hugo Reinhardt of AIC busted Drackett’s shut-out dreams by firing a one-timer during a two-on-one opportunity, tying the game.

Not long after, third year Financing major and defenseman for RIT Darren Brady scored the game-winner. It was the first time a defenseman has scored this season for the Tigers.

AIC pulled their goalie and brought on the extra attacker late in the third period, but it was no good. RIT won the match 2-1 and the sea of orange went home happy. 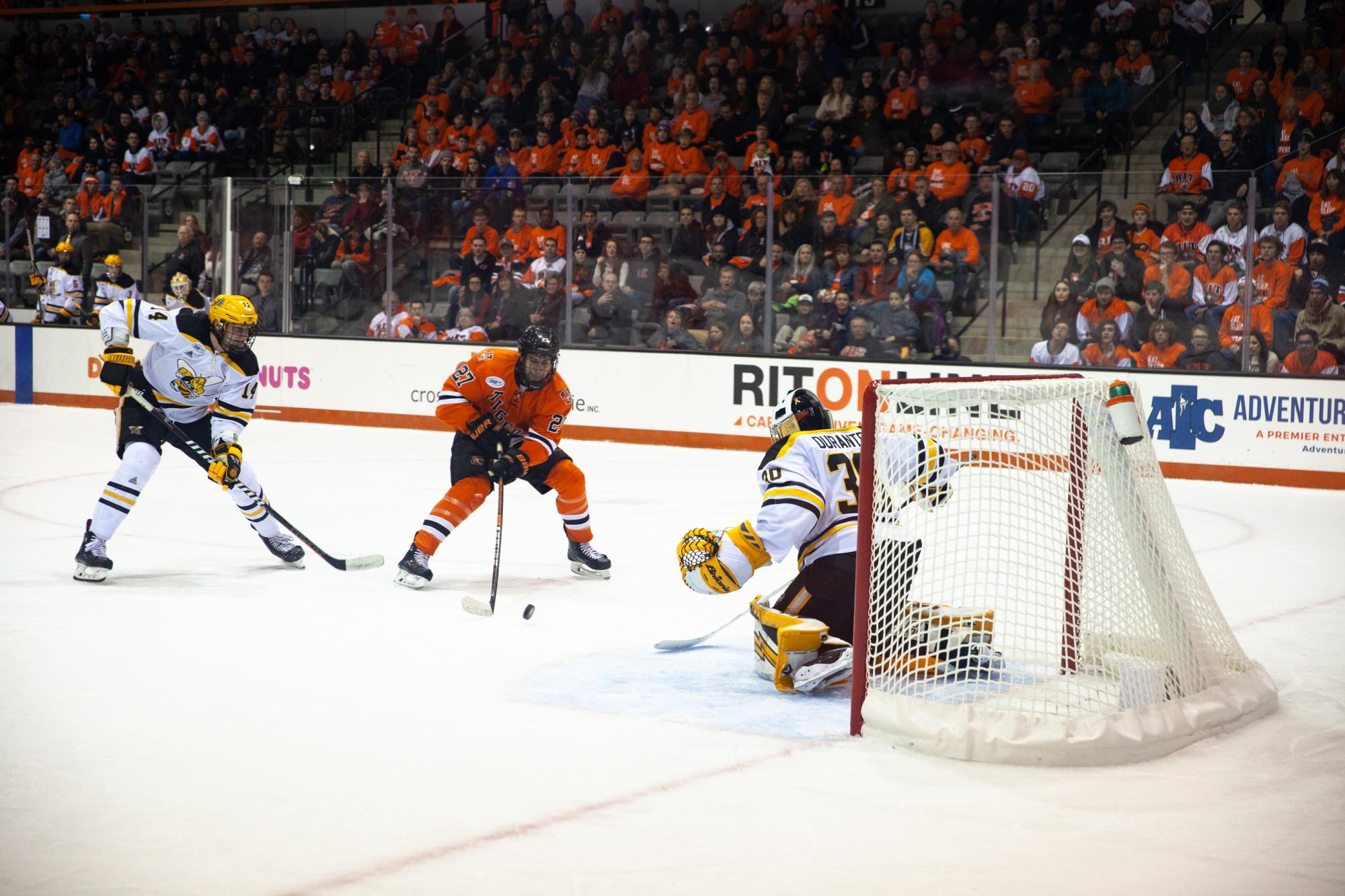 The Tigers registered 26 shots in the game, while the Yellowjackets had 33. Both teams could not capitalize on the powerplays, but good goaltending prevailed. Drackett stopped 32 out of 33 (.970) shots for RIT and Stefano Durante saved 24 out of 26 (.923) shots for AIC.

Drackett was pleased with the way his team played the match.

“Our D-core [Defense] played really well tonight and when I couldn’t see the puck they were blocking shots,” he said. “It was really just good team effort and we all kept our composure in the end.”

“It was really just good team effort and we all kept our composure in the end.”

Tigers Firing on All Cylinders

In the second match, RIT started off the game strong. According to RIT Athletics, fourth year Biomedical Engineering major and RIT forward Erik Brown fired a shot on a two-on-one break. The shot whizzed past AIC goalie Durante.

Not long after, Hamacher sniped the next shot from the middle of the ice, giving the Tigers a quick 2-0 lead.

Due to the early lead, AIC changed their goalie and put Zacharias Skog in net. That tactic failed though, as Hamacher got his second goal of the night, late in the first period. The shot bounced off Skog and trickled into the net.

There was no stopping RIT in the second period. Fourth year Packaging Science major and forward for RIT Abbott Girduckis scored a goal within three minutes of the start of the period. The Tigers held a 4-0 lead.

The Yellowjackets were able to get on the board in the second period. Forward Blake Christensen scored on a powerplay, cutting the Tigers' lead to three goals.

Midway through the second period, AIC’s Jared Pike stomped on first year Business Exploration major and forward for RIT Will Calverly. Calverly went off the ice in pain, but eventually returned later in the period. Pike got a five-minute major penalty and was disqualified from the game.

RIT took advantage of the long powerplay as Brown scored his second goal of the night.

The third period didn’t live up to the hype of the first two, as the Yellowjackets cut the lead back to three goals with six seconds left in the game. Forward Chris Dodero scored his first collegiate goal for AIC. Nonetheless, the Tigers won 5-2. 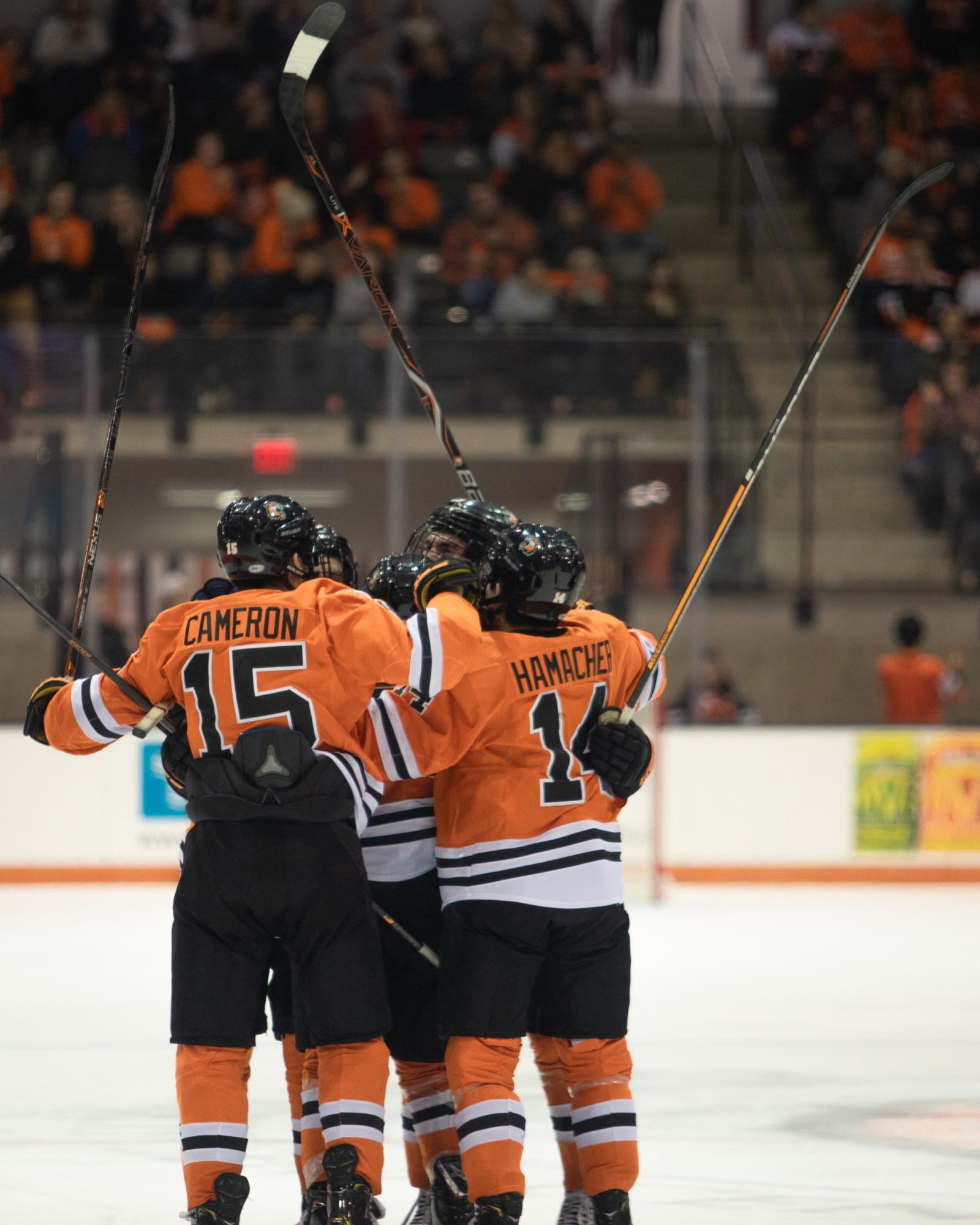 The Tigers will then travel to Boston, Mass., to play the Northeastern University Huskies (6-3-1) on Nov. 24, 2018. This will be a tough but hard-fought match for the Tigers against a ranked opponent and a non-conference match.

RIT has some steam heading into these two matches. The season has just begun, but it is imperative to get off to a hot start.