Katya, one of the two Amur tigers lays in her exhibit at the Seneca Park Zoo. Photograph by Joey Ressler.

The Student-Athlete Advisory Committee (SAAC) works closely with on-campus club Tigers for Tigers (t4t) to spread awareness about tigers and their endangered status in the wild. In fact, the National Tigers for Tigers Coalition reported that there are only about 3,200 tigers left in the wild.

"It's pretty crazy to think that our mascot will be like a mythical creature in like 20 years," said Matthew Miles, fourth year Computer Science Major and president of t4t.

Tigers for Tigers started off as a club within SAAC because of the athletes love for their mascot. SAAC is a student run organization of student-athletes who put on community service events and try to bring the student-athlete body together. The Committee puts on "Tiger Den" events that include giveaways, free food and pep rallies for all students to attend. Holly Leone, president of SAAC, Industrial Design major, and RIT Women's Lacrosse player said that t4t was originally just a part of SAAC but became its own club because non-athlete students were also passionate about saving their mascot.

"It's unique," Leone said. "We're the only school [in the coalition] that has athletes supporting t4t." Two years ago, t4t became its own student-run club so that students and athletes alike can save their mascot. 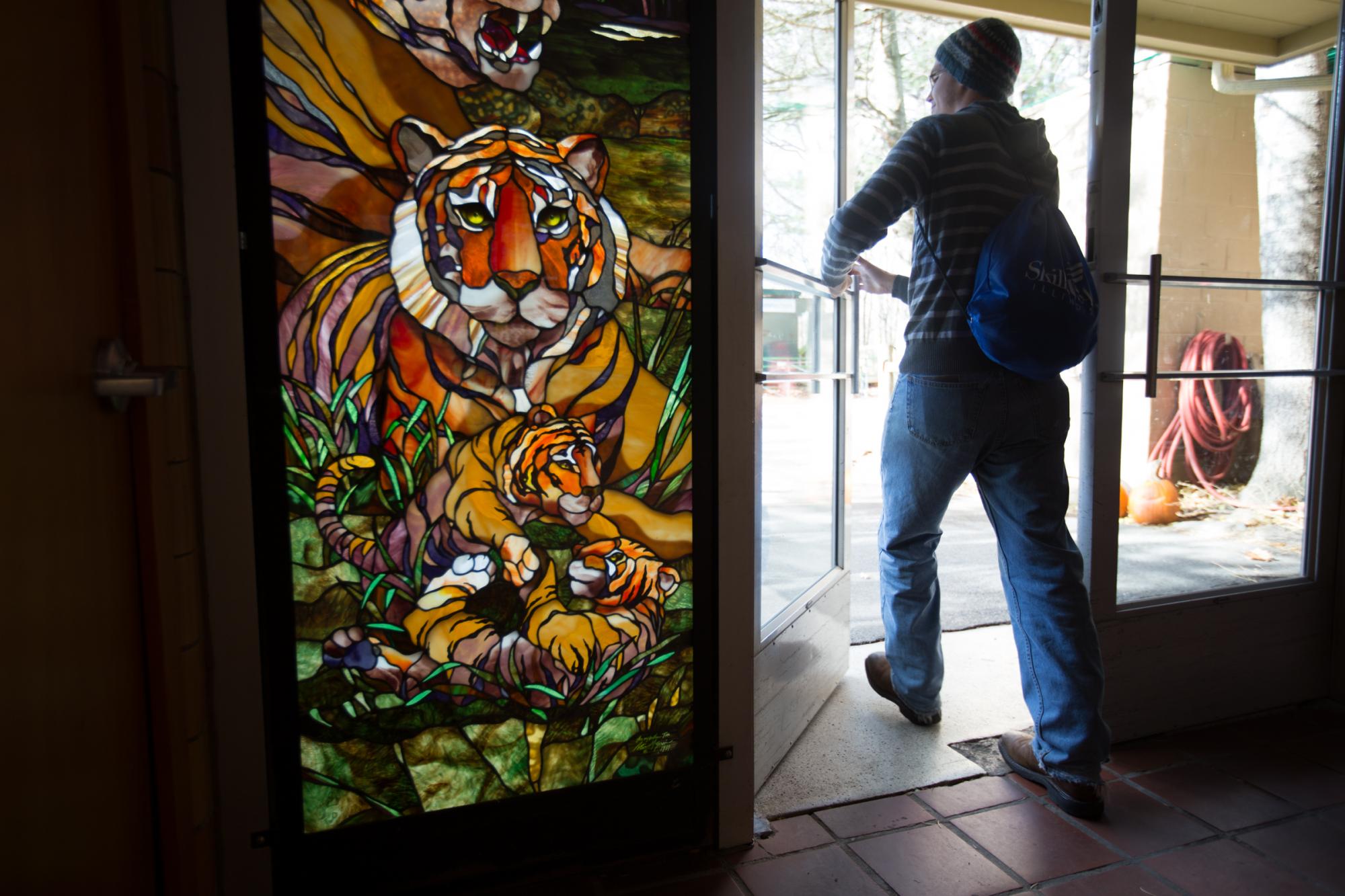 SAAC and t4t work together to bring Tigers together for tigers. Last year, t4t held a silent auction of tiger-themed hockey jerseys at the Brick City Homecoming Hockey game at Blue Cross Area. T4t is able to use their resources with SAAC to put on these events. Tiger Week is another time when t4t works with SAAC to create fun events. During Tiger Week, t4t and SAAC get together to put on a series of events related to raising money and spreading awareness about tigers.

Here's a breakdown of the events:

Pie an Athlete in the Face: Athletes and t4t stand by the Tiger statue. For every dollar you pay, you get a pie to shove in an athlete's face. What fun!

Five Guys Fundraiser: During a certain time of the day, part of the proceeds of purchases at Five Guys go to t4t. Burgers and saving tigers- that's easy!

Tiger Skit: The Tiger Skit is a campus wide skit where "poachers" (athletes) chase Ritchie around campus trying to capture him. This spreads awareness about how harmful poachers can be to the tigers in the wild. It's fun to watch and educational — who knew!

Movie Night: This year, t4t showed "The Elephant in the Living Room," which is about the controversy between the freedom to keep a Tiger as a pet and how it can be inhumane to the animal and dangerous to the surrounding community.  This movie helps to contemplate the legal and ethical issues pertaining to owning big cats and other exotic animals. Fun Fact: San Antonio Express reported that the number of tigers in captivity in Texas is more than the number in the wild. What would you do if one got out?

Yolickity Fundraiser: A lot like the Five Guys Fundraiser, only with frozen yogurt. When you mention t4t at the counter, part of the proceeds from your purchase goes to saving tigers.

A Trip to the Zoo:  On a Saturday afternoon, anyone is welcome to come to the zoo and take part in a few tiger activities. This year, everyone that came to the event was given a tour of the zoo and learned about how it functioned. In addition, they got to watch a trainer feed the two tiger sisters at the zoo and see one stand up on its hind legs, looking very majestic. 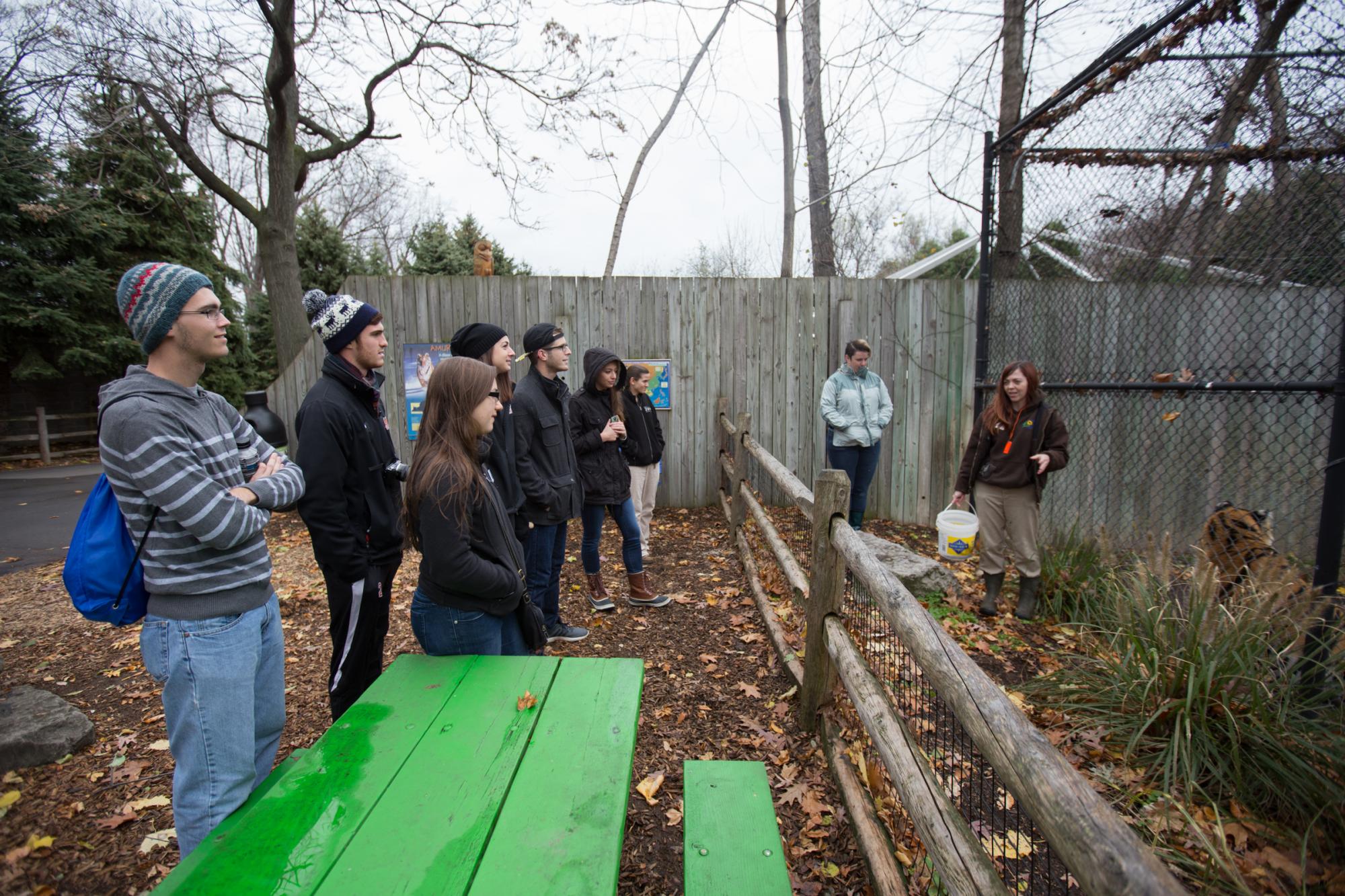 Tiger Week happens every year on every single campus in the Tigers for Tigers Coalition. It is a nationwide event that raises awareness and funds for tigers. T4t also supports Global Anti-Poaching Legislature in Congress. The RIT t4t collected over 100 signatures on a letter to NY Senator Chuck Schumer in support of the legislation. According to the congress website, the bill is "To support global anti-poaching efforts, strengthen the capacity of partner countries to counter wildlife trafficking, designate major wildlife trafficking countries, and for other purposes."

RIT uses its athletes to help promote the event and to get everyone to save our mascot.

"Tigers for Tigers is about awareness. It's about feeling like you are making a difference because you are raising money for tigers," Miles said. "It's about meeting new people and getting a whole new perspective on the idea of conservation."

Miles knows that many people do not know that Tigers are endangered. "Three subspecies are already extinct. Only six are left and there is another one that is like almost extinct," he said. "I like seeing the shell shock of people who didn't know that."

Tiger Week is not the only event Tigers for Tigers and SAAC put on. T4t sold shirts last year and plans to do the same this year. T4t also does an event called Tiger Trail and 5ks in support of tiger conservation. There are also Tiger Den events. Tiger Den events are when SAAC comes to a sporting event and does giveaways and pumps everyone up for the game. Both organizations put on events and do giveaways all year long to support Tiger athletes and tiger animals. Follow SAAC on their Facebook page or by going to http://www.ritathletics.com to check out Tiger Den Events. To see what Tigers for Tigers is up to, check out their Facebook page at https://www.facebook.com/T4TRIT.

SAAC and T4t have big plans for tigers and do not see our mascot disappearing any time soon.