The stage is set for the annual TEDxRIT event in the Ingle Auditorium in Henrietta, N.Y., Feb. 23, 2018. Photo courtesy of Amelia Hamilton/TEDxRIT

On Feb. 24, 2018, RIT held its second annual TED event, named TedxRIT. "Tabula Rasa," the proverbial Latin phrase for "clean slate," was the theme of this year’s event. The seven speakers set to present were as diverse as their interpretations of Tabula Rasa.

Before the doors were opened to the public, the organizers shuffled restlessly. The stage was set with physical, large bold letters in one corner: TEDxRIT. People congregated on stage were in a jesting mood. Finally, when everything seemed in place — the stage was empty, the lights were dim, the cameraman was perched in the center of the auditorium — then the doors were opened.

People came in and took their seats, their name tags stuck on either side of their chests. They studied the programs, unfolding them like scrolls, nodding in acknowledgement towards their acquaintances.

The emcee came on stage and deftly handled the introductions and pleasantries. He introduced the first speaker and gave a general overview of what to expect. .

L.Y. Marlow confidently marched onstage to the rhythm of the applause. Right away, she posed a question to the focused audience.

"If given the opportunity to live with passion and purpose, despite your fears and risks, would you do it?" Marlow asked.

Most would almost half-mindedly respond yes. She then went on to recount her story. 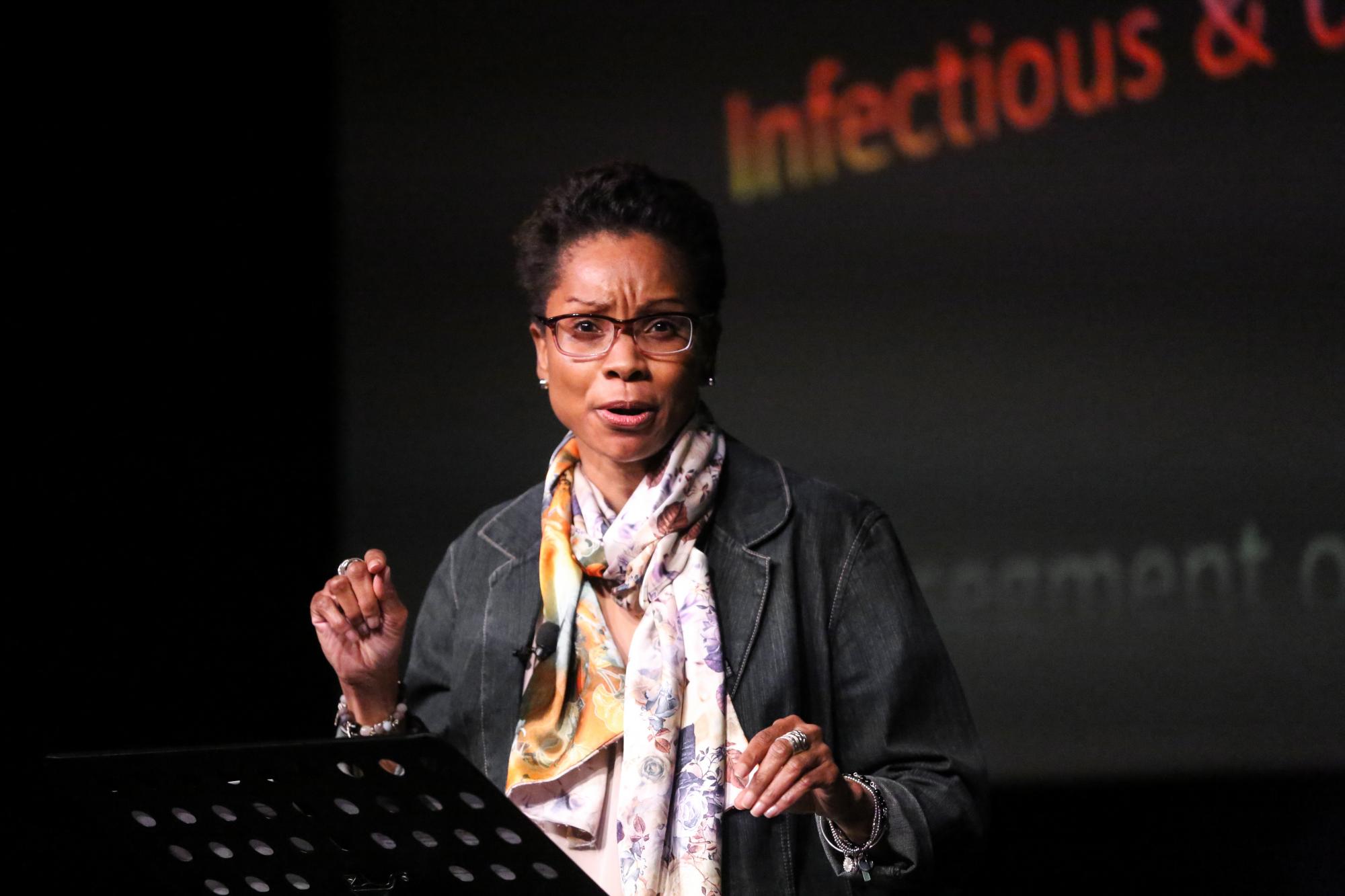 Marlow’s family had been subjected to domestic violence for generations. Marlow's mother had gone through the hell of living with an abuser and so did Marlow, as well as her daughter — the mother of her baby granddaughter, Promise.

It had been too much. Millions in this nation faced the same plight with nowhere to go. Marlow wrote to Oprah, quit her comfortable existence as a professional and poured her life savings into "Saving Promise," an initiative dedicated to preventing domestic violence.

Marlow's lifestyle, good fortune and wealth gradually dwindled. She found herself increasingly indebted to people. There was no sign of respite, but she still found purpose in the goal and in the mission statement of Saving Promise. She’d found her passion for raising her voice for the millions of women who’d been through and were undergoing the hell her family carried for generations. Shortly after Saving Promises’ 10-year anniversary, the organization partnered with Harvard’s T.H. Chan School of Public Health to develop solutions for tackling what Marlow calls "one of the biggest health crises of our time."

She stood triumphantly on stage, the audience rapt by her moving story and undiluted display of the most vulnerable aspects of her life and personality. She implored us to be passionate and never falter, even to our passion’s harshest demands.

The next speaker followed, Suhail Prasathong — a student of computer engineering at RIT on a nonimmigrant visa. He began by defining what he called "the privileged immigrant" and immediately assigned himself to the category. Coming

During his tenure at MCC, Prasathong became the president of student government. This is where his idea of the privileged immigrant began to take form. He recounted the story of Johnny, an immigrant from Myanmar who’d sneak onto the MCC campus and try to get glimpses of engineering class lectures and notes, hoping to teach himself enough to be able to attain gainful employment. Johnny worked odd jobs and lived in the United States on an undependable visa.

He approached Prasathong and told him his story. Both Johnny and Prasathong were immigrants, but there was a key difference in the immigrant experience for both. Prasathong was a flourishing student, making his way in the new environment with hard work and dedication. Johnny, with no lack of dedication or hard work, seemed to face insurmountable boundaries to what they both came here for: the American dream.

His story transported the audience from the MCC lecture halls and the student government president’s office to the dangerous and uncertain landscape of Myanmar. It depicted the ever widening socio-economic gap between people, who strive for the same things, yet some are dealt a cruel hand by fate, by no fault of their own. Visibly emotional, Prasathong composed himself and implored the audience to consider refugees and immigrants, the helpless and those in need kindly, as if we shared their predicament.

Next was a performance by Irish Roar, an RIT club dedicated to classical Irish dance. The only thing missing from the elegant display and uproarious music was pints of mead being downed irresponsibly by the audience.

After lunch, the next speaker was due. Skip Flanagan made his way to the stage. His talk, "Go Deaf," struck a chord without him uttering a single word. Flanagan is deaf, and his speech was performed in ASL and translated by an interpreter. 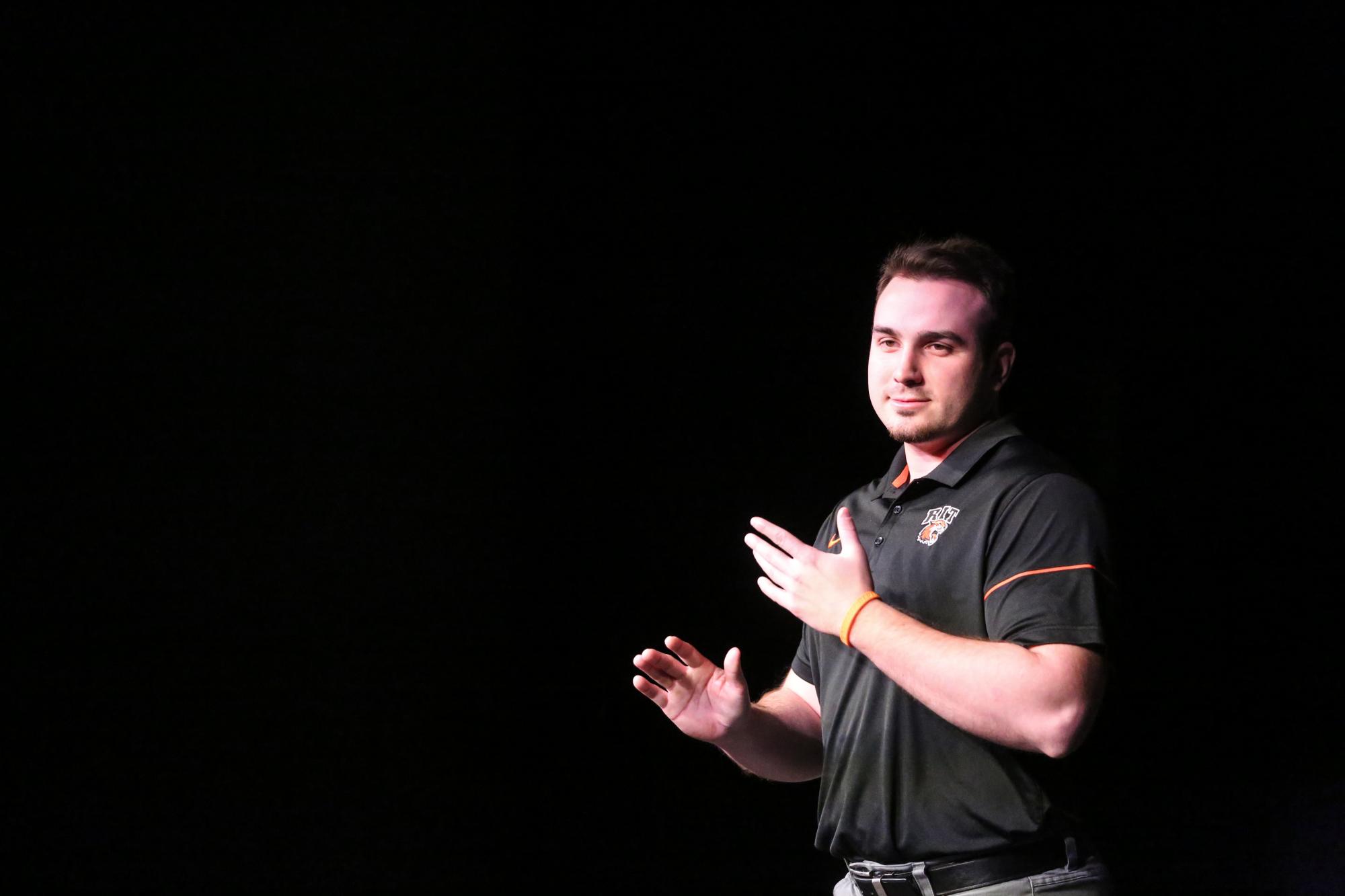 An athlete for much of his life, Flanagan reflected on the challenges of being young and deaf, having to deal with the social stigma associated with his condition and having to accept being treated differently than his peers at every turn of his life. As pictures of his childhood were shown on the screen behind him, Flanagan recalled his supportive parents trying to get him into little leagues only to be turned down time and again.

His father cemented the philosophy that Flanagan would employ throughout his adolescence and into adulthood: go deaf to the naysayers. After years of hearing no, Flanagan found that going deaf to the negativity enabled him to transcend it. He was a standout baseball player at the college level for years before recently accepting the position of RIT/NTID Athlete Development Coordinator.

Brandon Dcruz strutted onstage with nonchalant confidence. His demeanor barely hid the boisterous performative spirit, or the inner demons he wrestled with so regularly. The emcee’s description of him painted the picture of a polymath, a creative force to be reckoned with: musician, writer, record label founder and average 19 year old. But Dcruz’s creative exploration was always accompanied by an uninvited but persistent co-pilot: depression.

Cocaine train tracks, as he poetically referred to the bruises on his wrists from cutting them as a teenager, help him get out of bed each day and create. He ruminated on the tender aches of youth that we all experience but so strongly withhold and refuse to share for they are the gates to our vulnerabilities.

Montages played behind on the projected screen as he poured his heart out, sometimes even comically as he tinged harsh moments with poignant humor. He started a record label after finding himself infatuated with a girl playing the guitar at an open mic event. He wrote and performed slam poetry about being deported for having sex with Melania Trump. He doesn’t see the depression that holds him in his bed helpless as an aspect of his life, he sees it as life itself.

As he concluded his speech, music started to fill the auditorium, and Dcruz, as he admitted himself, danced terribly to roaring applause.

Vocal Accent, RIT’s own all female acapella group, performed a breathaking and engaging set of songs.

Gary Stine spoke on how the process of self realization transforms how we speak in public.

“We withhold our true selves when we confront an audience because of a fear of not being perfect, not good enough for the world to see,” Stine said.

He proposes that we examine the nature of the self and how we all experience the same spectrum of emotions. Accepting yourself, imperfections and all, is the key to presenting that person to an audience. At his organization, Spoken Word Solutions, his unique method of personal and professional development is geared toward removing inner obstacles to growth, particularly obstacles that may be difficult to see or identify.

He assists clients in achieving success in personal and professional endeavors by identifying and fully deploying their strengths (both obvious and latent), challenges and individual goals.

Shima Ghaheri, born and raised in Tehran, Iran, depicted the isolated world of children growing up in the desolate remains of battlefields

She employs design principles to create toys for children out of inexpensive materials. Her creations come from simple cardboard boxes a la Home Depot. Little theaters in which custom-made players can be made to perform, cardboard boots and even board games that implement charade-like rules.

Ghaheri is dedicated to improving the plight of these children — experiencing childhood and youth, developing their world views among the rubble of bombed buildings and vehicles, shrapnel and the sordid remains of war.

Her pictures showed the children smiling, a tender contrast among the barren landscapes of what was once the thriving Mediterranean and Middle Eastern civilization. The young children that grow up in this environment eventually become a reflection of it. Ghaheri sees that a childhood saved is a person rescued from endless cycle of violence and retribution that fuels the conflict that has plagued parts of our world.

How Do Magicians Fool Us?

The final speaker, Michael Geffert, a first year Software Engineering major at RIT and magician, spoke on the mechanics of how magicians fool us.

“Lies, distraction and confidence. The key ingredients to any good magician’s routine,” he said.

He performed card tricks and deconstructed them, showing where the cards switched hands, where the card was planted the whole time and how the volunteer made no choice of a card at all.

“A magician is always one step ahead. We must consider every possibility, be statistically aware of the odds of given tricks and situations. And to execute it all flawlessly, it requires confidence,” Geffert said.

He talked about aspects of being a young magician, the nature of performance, having conspirators in the audience and being a normal kid through all of it.

The second annual TEDxRIT then came to a close with the audience delivering to the speakers a much-deserved applause.

Pictures from the event can be viewed on TEDxRIT's Flickr page.

TEDxRIT is set to return again next spring.