On Jan. 26, RIT President David Munson held an open forum in the Fireside Lounge on campus. During this forum, he spoke with students regarding current projects underway within the RIT administration, his goals for the future and issues facing RIT students.

Munson began by explaining that, since his inauguration, he has been hard at work listening to key stakeholders within the RIT community. He lamented his relative absence from campus during his tenure thus far, but assured attendees that it was due to his work connecting with administrators, faculty, staff and alumni. Now, after speaking with all of RIT’s other stakeholders, Munson felt it only right to end his inaugural tour by speaking with the most important stakeholders — the students.

First, Munson recapped his vision for the future of RIT. He explained that he was looking to expand what he called “experiential learning” programs. Munson acknowledged that many degree programs could be very restrictive on campus and that made it difficult for students to dip into minors and double majors outside of their home college. Since he holds high value in mixed-discipline learning, Munson intends to loosen these restrictions in the future.

Additionally, Munson also wished to expand international opportunities for students. This would include faculty-led research, work abroad and study abroad, among others. He also looked to expand the Simone Center’s capabilities and augment RIT’s entrepreneurship programs, as well as increase club and student organization involvement across campus.

Tying in closely with this mixed-discipline approach, Munson aims to increase the number of multidisciplinary design projects and organizations that bring together students of different backgrounds to work on projects that could individually span multiple academic years. 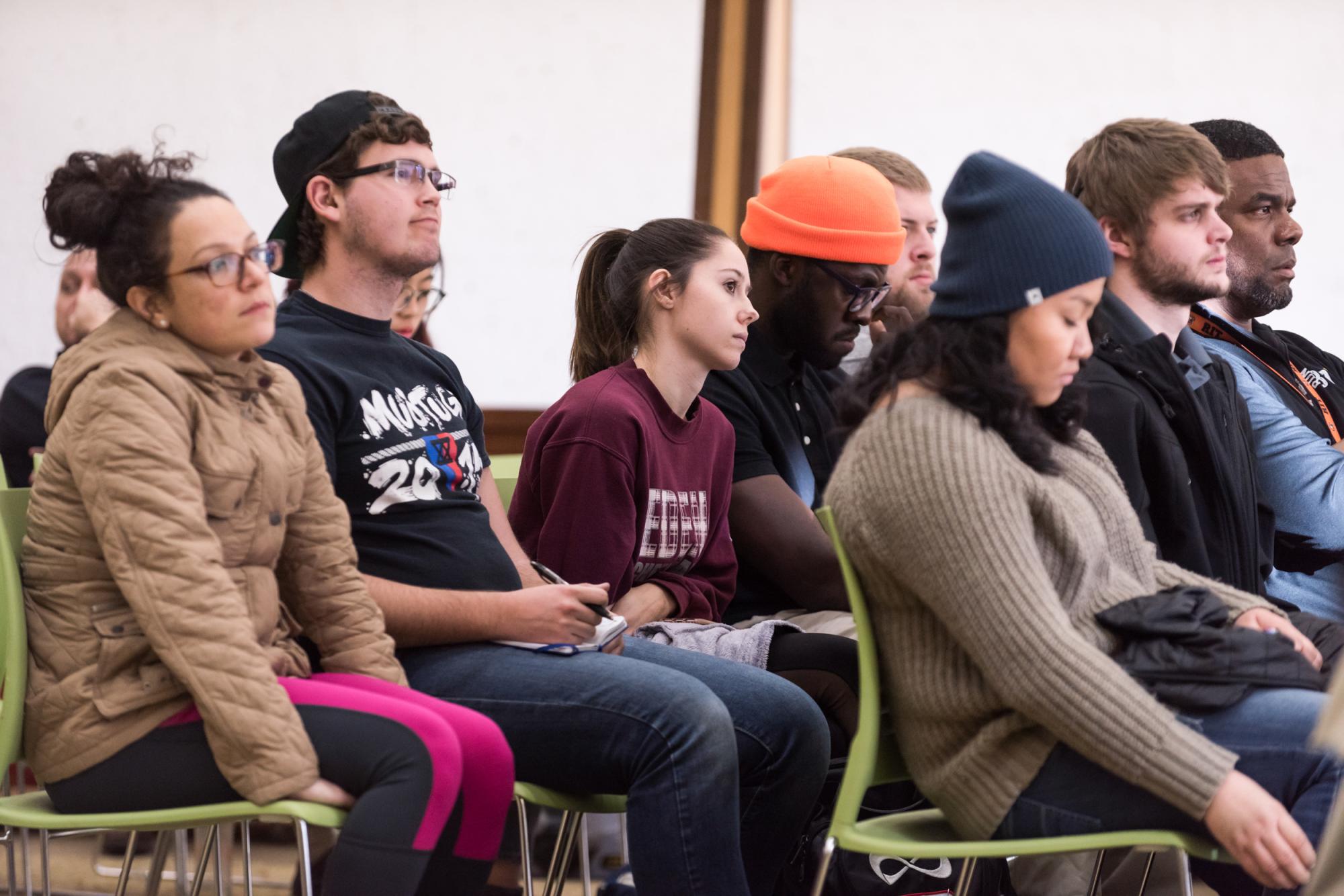 Moving on, Munson spoke on the subject of Austin McChord’s generous donation last fall. While plans to remodel Wallace Library have been under development for some time, McChord’s donation moved plans forward exponentially. The donation, in part, will fund a new building connecting the SAU and Monroe Hall to the Wallace Library and the rest of the academic tunnels' network. This would, in effect, combine the stretch of building from the Wallace Library to the Interfaith Center into a singular, expansive student center.

Additionally, Wallace Library would be stripped of many of its books, with only those in high demand being kept on hand. The remainder would be housed in an off-campus site, retrievable upon request. Many of the resources within each of the existing buildings may also be moved and shifted for better organization, such as the planned relocation of the music practice rooms to a more readily-accessible location.

The remainder of McChord’s donation will be used to expand the resources of the Golisano College of Computing and Information Sciences (GCCIS). An expansion is to be constructed immediately adjacent to the existing facility on all three levels.

MAGIC will be completed this summer, and is set to officially open in Fall 2018. The centerpiece of the building will be a 7000-square foot sound stage. Munson advertised this as a state-of-the-art filmmaking studio to be utilized by RIT students.

Munson recognized that many other colleges around campus are also in need of resource expansion; however without any donors lined up, there simply aren’t enough funds. One of the largest projects President Munson is looking to pursue once funding is secured is a new auditorium, as he recognizes Panara Theater and Ingle Auditorium are far too small to host large-scale performances. He also acknowledged that the Gordon Field House is often not ideal for these types of events.

Finally, Munson touched on a debate happening internally within RIT’s administration in regards to free speech and other First Amendment rights. Since RIT is a private institution, it does not necessarily have to abide by all First Amendment rights and therefore is able to deny speakers based on the opinionated content of their speeches. The administration, therefore, is currently weighing the ethical responsibilities of shielding RIT stakeholders from hate speech, perceived or otherwise, as opposed to allowing all speakers within reason an equal chance to voice their opinion. To begin restricting speech could potentially lead to a larger issue of silencing dissenting opinions. The debate is ongoing.

Winding down, Munson opened the floor to students to ask questions. Questions raised included the possibility of parking garages, restricting the smoking policy, availability of tax help on campus, construction of research labs for science and engineering students, entrepreneurship, starting clubs, updates on carbon neutrality plans by 2030 and a follow-up discussion on free speech.

“There’s only one reason the university is here and that’s because of you.”

The forum closed with Munson thanking those in attendance for coming out and raising great points. It was certainly enlightening for him to hear the opinions of RIT students, and he stated, “There’s only one reason the university is here and that’s because of you.”

For any decisions he makes, Munson says he always keeps the students at the top of the consideration list. He invited everyone, if they see him around campus, to come up and say hello.