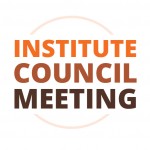 At the November 13 Institute Council meeting, President Destler gave his report and updated information about the strategic planning process. Judy Bender, assistant vice president for human resources, presented changes regarding staff compensation. Finally, a new policy was introduced and the next academic calendar was revealed.

During Destler’s report, he updated the Institute Council on the planning process for intersession, stating that the Institute is on track to offer 12 courses during the break. Destler told the Council that the courses are a good opportunity for students to retake “gateway” courses that would hold degree progression back if not taken on time.

RIT is currently operating under a strategic plan that was created before Destler’s arrival. The current strategic plan expires in January of 2015, and a new 10-year plan will start that month. Destler announced the creation of a steering committee to guide the process of creating the new plan. He explained that he doesn’t want the plan to be seen as being imposed from high-level administrators and that he doesn’t want the process to be as taxing as the last strategic planning process.

Destler hopes to incorporate the lessons learned from the last plan into the new one. In particular, the last plan had 132 strategic objectives, but he explained he would like to see more focus on a smaller number of well-defined goals. At the same time, Destler said he doesn’t want to color the feedback process with an administrative template, so the Institute will have to walk the fine line between too much community input and too little.

Judy Bender, the assistant vice president for Human Resources, shared information about a recent effort to adjust staff compensation to align with the greater labor market. She has been successful in adjusting the wage bands for RIT staff to align with the fiftieth percentile. Wage bands are used to determine the range of pay that a staff member would receive. In essence, the changes move staff members’ compensation closer to what would be competitive with the labor market outside of RIT.

She shared that although 92 percent of staff had market midpoint adjustments, RIT’s overall job- related turnover for staff remained at a very low 3 percent. Bender expressed that this was evidence employees in general see RIT as more favorable than other employers. According to Bender, $300,000 had been allocated to the project, but the efforts were limited due to RIT’s $12 million deficit.

RIT’s Chief Legal Officer Bobby Colón gave a presentation on the recently changed policy C6.0, and the new policy, C6.1. The U.S. Department of Education required RIT to update its policy C6.0, which deals with Title IX compliance, in response to a student incident that was resolved in 2011.Title IX is a U.S. law that deals with sexual misconduct in academic institutions.

Bender and Colón stated that policy C6.0 removed a lot of language about the institutional aspect of handling sexual misconduct situations in favor of legal specifics. Policy C6.1 is intended to add back what was lost while maintaining compliance with Title IX, including information about how Human Resources conducts investigations, the mediation procedures and how reports are investigated within the institute. Policy C6.1 still must undergo the proper governance process before being approved.

The academic calendar for 2015-16 was introduced, and will be presented for approval in early 2014. Highlights of the calendar include symmetric fall and spring terms with 73 class days each. Commencement is planned for May 20-21, 2015 with summer classes starting May 31.

The next Institute Council meeting will take place on December 11 in 2230/2240 Slaughter Hall.