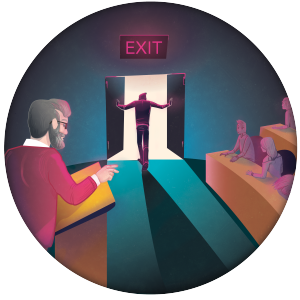 “Gender Gap,” a phrase usually defined as the difference between the male and female populations, is now being taken under the lens of college education, specifically in terms of college attendance and graduation. This gap that has been changing and expanding since the late 1970s has now begun to raise concerns and questions across American universities.

Historically, males have enrolled and graduated at a higher rate than women. According to the U.S. Census, about 20 percent of males 25-29 years old held a bachelor’s degree in 1970. Comparatively, the percentage of women in the same age group was 15 percent. At around the same time, this rate for males slowed while the rate for females continued to climb. In 2009, 74 percent of women graduating high school went on to a two or four year college. Only 66 percent of men did the same.

Females now enroll at higher rates and graduate more frequently, and often sooner, than males. Although women’s growing collegiate success should be applauded, the decreasing rate of men’s enrollment and graduation is raising concerns at colleges nation-wide, including RIT.

RIT’s own Student Success Steering Committee, a group focused on improving student retention, has created a subcommittee to address the gender gap on campus. Matt Lake, senior academic advisor for the department of information sciences and technology, and Dan Hickey, assistant director at the Academic Support Center, are both members of this subcommittee. Lake and Hickey are looking at the numbers and trying to find their causes, and they are not the only ones looking.

Determining why this trend is occurring is a major concern; but, the reasons are difficult to pinpoint both for the faculty at RIT and at universities around the country. Some studies suggest that the gap could be linked to male behavior patterns starting in middle and high school. Claudia Buchmann, co-author of Rise of Women and sociology professor at Ohio State University, explained to Inside Higher Ed that the gap in graduation is not caused by intelligence but by the common, observed difference in “effort and engagement in school.” On average, the male population is less engaged in middle and high school than their female peers; a difference that can have a snowball effect that leaves some individuals unprepared for college.

Upon hearing about the gender gap in college graduation, second year Criminal Justice major Halle Phipps was surprised. “It doesn’t really make sense, you’d think they would have the same initiative to graduate at the same rate.” To her, a student’s drive should be the main factor in graduation rate. “Gender shouldn’t really make much of a difference.”

But some of the classically-held male stereotypes can also contribute to the problem. “I think there’s a tendency in the male population to not be as outward when seeking help, asking for help and looking for resources,” explains Lake. “There’s somewhat of a male culture aspect of wanting to do it on your own.”

Considering the theories and data available to them, the subcommittee is working to help change the numbers. They have done research on the efforts of peer institutions, including Cornell, RPI, MIT, Syracuse and the University of Rochester, to see if they have services that could benefit the male population if implemented here.

Yet the committee has mostly focused on the services RIT already has – including the Academic Support Center, various study centers on campus and the Early Alert system – and how these services can be improved to help close the gap. “What are the resources that already exist on campus that could benefit our males?” asked Lake. “What are we doing to outreach to those males to make sure that they are utilizing those resources that already exist?”

But Buchmann also told Inside Higher Ed that the male population overall should not be the main focus. “We really need schools that set high expectations that treat students as individuals – not just as gendered groups,” she explains.

In the end, Lake does not believe that RIT’s males should be worried. “I think it’s important for students to realize that just because males are graduating at a lower percentage doesn’t mean that it has to be specific to them,” says Lake. When looking at this, it is best for the student to assess his own efforts and to make sure he is doing everything he can to succeed.

Members of the committee believe that women should look at the statistics in a similar way. “Everything I’ve said about the [males] holds true for woman as well,” says Hickey. He also wants to look into whether the support females have on campus, like the RIT Center for Women and Gender, could benefits males if made more available to them.

For anyone who is concerned about their academic success, Hickey and Lake want to express that students are not alone. Seek out help. Do what is necessary to help oneself succeed and graduate. Talk to advisors or visit the various resource centers on campus for assistance.