Photo by Daniel Vasta
I couldn’t have been happier with the skill and professionalism of Erik Mannhardt, my tattoo artist. Finding the right artist is one of the most important – and nerve wracking – parts of the tattoo process.
Getting the tattoo hurt, of course, but I could maintain a halfway-decent conversation for the hour that it took for the piece to be finished.
I made the appointment only two days before. The design was already fully rendered, making the process quick and easy, but tattoo artists will sit down with you and help you figure out a design if you’re not sure.

As I sat in the waiting area and glanced at the art on the wall, I fidgeted nervously. I couldn’t help but think about the looming procedure, and while I knew that I’d be in practiced hands, my pulse didn’t get the memo. I could be in a dentist’s office, waiting to get a wisdom tooth pulled.

According to a 2014 Harris poll, 21 percent of American adults have at least one tattoo. And although it’ll probably be a while before we have a president with a face tattoo, there’s no denying that attitudes have shifted to become more accepting.

While it’s one thing to have a small tattoo, extremely visible tattoos are often still considered taboo. The road to being heavily inked usually starts young.

Eschbach has her tattoos in very visible places, including her throat and her hands. The day she turned 18, she got her first piece.

“I thought it was the cool thing to do and I didn’t put much thought into it,” she said.

A similar sentiment was expressed by Molly Sotak, a fourth year Film and Animation major who also has multiple visible tattoos.

“It was from an album cover, and I got it three days after I turned 18 because I really wanted to get a tattoo,” Sotak said.

While this might seem like an outgrowth of youthful impulse, the process of getting a tattoo has been a rite of passage in many cultures throughout history. The indigenous Maori people of New Zealand considered the first tattoo as an important step into adulthood and the New Guinean Korafe tribe adorns its adolescent girls with facial tattoos to mark the beginning of their womanhood. But while tattoos are marks of honor and tradition in some cultures, Western culture is far less enthused with the custom.

The European and American sailors that traveled throughout Asia and Oceania introduced tattoos into Western culture. These sailors would get tattoos as souvenirs to commemorate the places they had been and their nautical achievements. And while this kind of tattoo would eventually grow into its own distinct style of art — typically referred to as “old school” — tattoo art’s association with sailors gave tattoos a specific connotation. The tattoo became a very visible indicator of the working class — and an easy scapegoat for the moralists of every era.

While it may seem unthinkable today, tattooing has been legally prohibited — or at least discouraged — for much of its modern existence. New York City actually banned tattoo shops from 1961 to 1997, ostensibly to prevent the spread of Hepatitis B. For decades, tattoo artists were forced to work in secret, developing their art at a time where it was not socially acceptable.

But while the government may no longer keep people from getting tattoos, a very different gatekeeper remains: mom and dad. The approval — or lack thereof – of Eschbach’s parents impacted the speed and placement of her tattoos.

“It was slow at first because I was still living with my parents at the time and my father didn’t condone them. I had to be able to hide them,” Eschbach said. When she became financially independent, her tattoos became more public.

“I’m a grown adult, and I have a good job, so they can’t really say anything against it,” Eschbach said. “My mom knows I’m smart about where I go and she knows that it’s art. My father skillfully ignores it.”

Sotak experienced a similar reaction from her parents.

“My mom doesn’t love me any less, but I know it hurts her on the inside,” Sotak said. “My dad’s like, ‘Please stop spending money on this.’ Neither of them have ever tried to disown me because of it.” 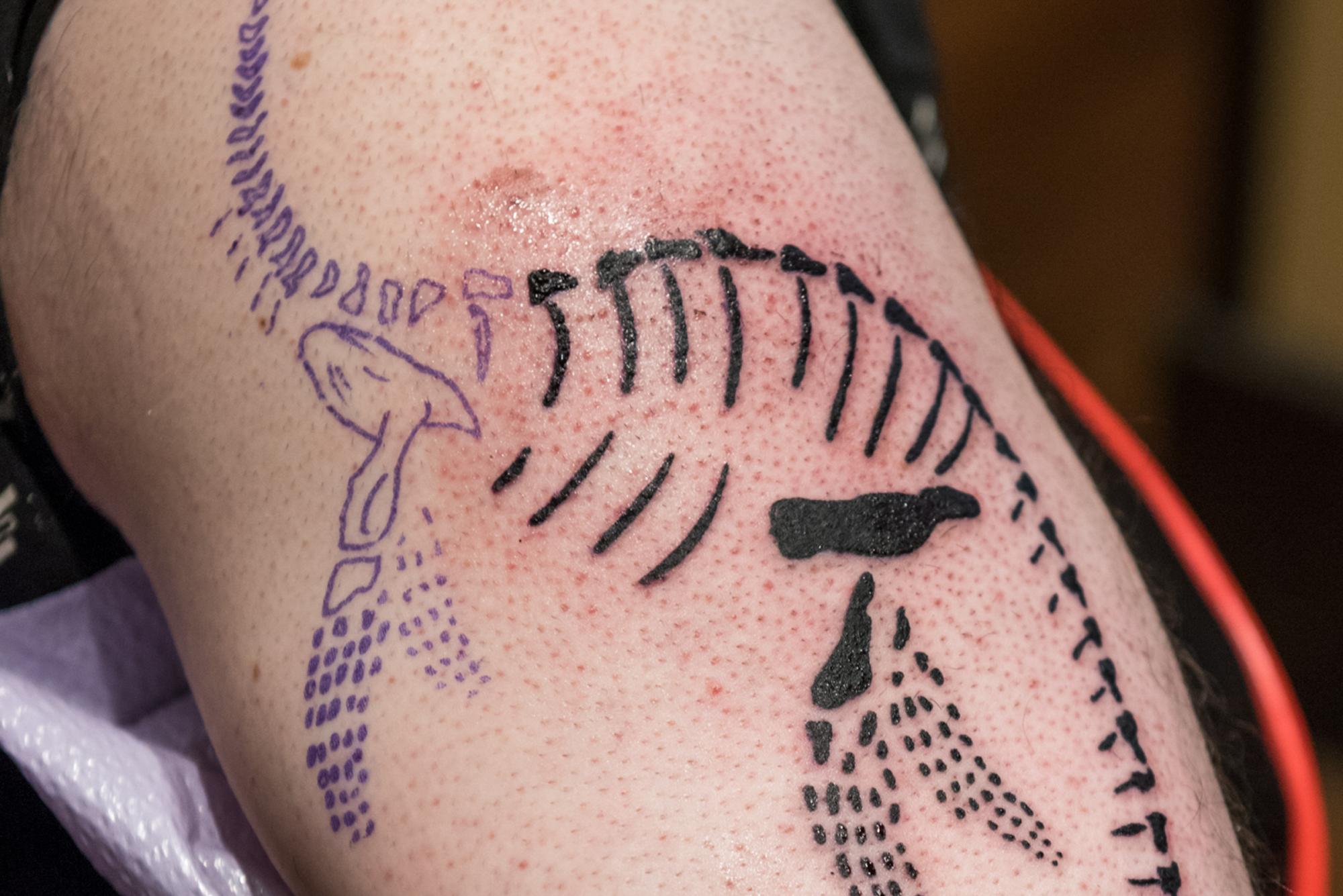 Given the cultural context tattoos have inhabited in the past, it’s not surprising that many parents consider getting one a shocking act of deviance. For some, getting a tattoo is still like wearing a shirt that says, "I frequently black out and get in bar fights." But tattoos are no longer just for soldiers, sailors and prisoners. And with this growing acceptance, workplaces have relaxed their regulations.

“I always tried to cover them up while job seeking,” Eschbach said.

While covering an arm or chest tattoo is easy, hand tattoos are always going to be visible. This, however, didn’t pose an issue for Eschbach’s current employers, who were fine with the tattoos.

“As soon as I got the green-light that my hands were ok, I actually got my throat done shortly after getting the job,” Eschbach said.

“I’m an animator, usually the dress code is jeans and a t-shirt,” Sotak said. “I kind of knew in high school that I wanted to do something art-related, so I made those choices based off of the lifestyle I knew I was going after.”

The stigma against tattoos grows more antiquated by the year. According to a study by nearly 40 percent of Americans under 30 sport a tattoo. Soon it will not be viable to turn someone down based on their inked skin.

“I feel like now so many people have them that places of employment are starting to realize they can’t judge people based on those choices,” Sotak said.

As the connotation and prejudice fades away, tattoos can become what they have always been: an art form, pure and simple.

At the center of this controversial art is its artists. Though tattooing is a 50 billion dollar global industry, it’s still taught by masters to apprentices.

“It’s a subculture. There are rules, but each artist has their own way of teaching and their own way of doing the work itself,” said Gabe Levitt, a 2016 RIT Illustration graduate and apprentice tattoo artist.

Levitt is honing his skill at Kastattoo Art Studio in Brooklyn, N.Y.

To learn the art, Levitt practices on rubber-based synthetic skin. The fake tattoo is judged by his tattoo mentor.

“Eventually he will judge me to the point where he says, ‘Okay you can tattoo real skin.’ That’s when I holler at anyone and everyone who wants a free tattoo, but is willing to risk it for the biscuit,” Levitt said.

Risk is a big part of the tattoo artist life, and is in many ways similar to the life of a freelance illustrator; you’re only as good as your reputation and portfolio.

“For freelance, you hope someone sees it. For this, people wear it on their skin. And then people are like, ‘Who did that?’ and that’s where word of mouth comes into play,” Levitt said. 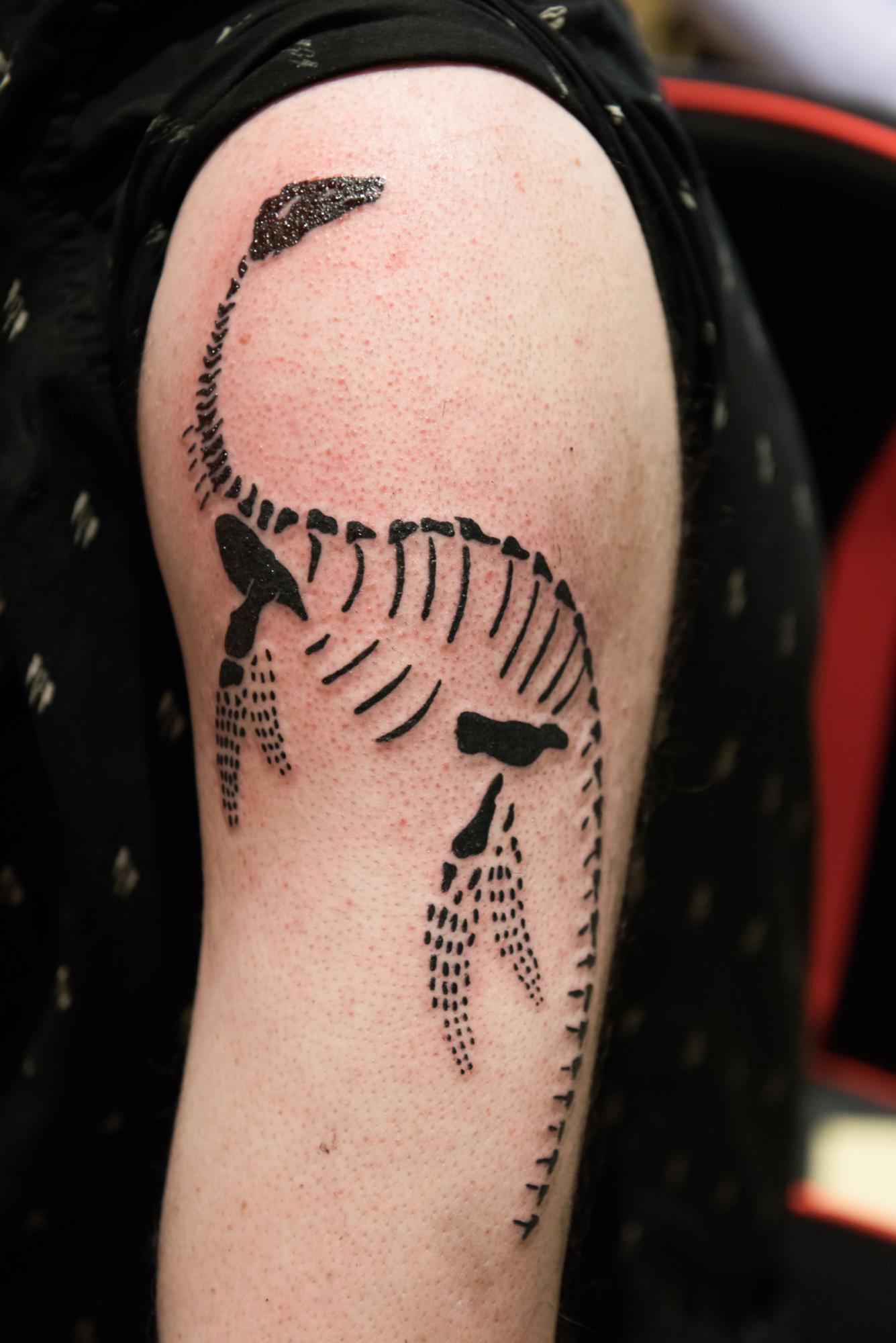 So you’ve decided to get a tattoo. Maybe it’s a portrait of a beloved pet. Maybe it’s one of your favorite song lyrics. Maybe it’s a skeleton of plesiosaur. The next step is to find a reputable shop with an artist whose style you like. It’s up to you to do the research — as well as keep an eye out for any red flags.

“It’s somewhere between art and a medical procedure,” Levitt said. “If the shop is dirty, don’t go in there.”

But beyond the high bar of not being contaminated with hepatitis, you have to gel with the artist.

“Get it from someone with the same kind of care that you have for yourself and the art,” Levitt said. “It’s like finding a wife or a husband. You don’t want a divorce, you want to do it right the first time.”

Next, you have to be ready for what it’s going to feel like.

“Know it’s going to hurt,” Levitt said. “It is a needle going repeatedly into your skin, over and over again. But if it’s good, you’re probably going to love it for a long, long time. You’re going to have to.”

I haven’t been scratched by a cat in quite a while, so I don’t know how apt that particular comparison is. But I can confirm that it felt like a needle going into my skin over and over again. That being said, if you get a tattoo on a less sensitive area — like arms, shoulders or thighs — the pain is a lot more manageable than one would think. And while the above photos may contradict this, I wouldn’t characterize the session as particularly painful. My artist Erik Manhardt has been tattooing professionally since I was a toddler, so the job was done quickly and efficiently. I walked out of Steadfast Tattoo with a sore arm, a lighter wallet and an addition to my skin that’ll be with me for the rest of my life.

Changes, Inside and Out

If you have anywhere from one to 100 tattoos, you get the same question: “But what does it mean?” Sometimes the answer is straightforward, but just as often, it is not. How does something derive meaning? Can the meaning change?

For Eschbach, meaning often comes from the story of how she got the tattoo.

“My husband and I travel a lot,” said Eschbach. “We find artists we really like online and then kind of make an adventure out it.”

For Sotak, the aesthetics come before the meaning.

“I think as I started getting more, I started caring less about what they meant to me and caring more about the quality of the work and what it actually looks like,” Sotak said.

“I think that maybe there’s two different types of people when it comes to getting tattoos. Some people are like ‘I can’t have anything on my body forever if it doesn’t mean something to me.’ And I totally understand that. But I’m just not that kind of person,” Sotak continued.

For Levitt, tattoos are a part of his own art; he even intends on tattooing himself one day.

“I want to know what it feels like from my own perspective so I can relate to my canvas and know what they’re feeling when I start stabbing them with a needle,” he said.

Even if there is no direct meaning, tattoos may occupy a deeper place in the psyche. A Texas Tech University study found that women with multiple tattoos have higher self-esteem than those without. The study also found a correlation between tattoos and previous suicide attempts in these same women. By getting tattoos, people can reclaim their bodies and express a different, more complete version of themselves. Through this lens, getting a tattoo is an act of self-healing.

With all of the planning, pain and potential consequences, some people just don’t understand why others get tattoos. How could you decide on what to get? What if you don’t like it one day? The answer is different for everyone with a tattoo. Some pieces have a long story behind them, but others don’t. And that’s fine. Tattoos can make you belong or set you apart. Tattoos can be an act of private or public expression. But most of all, tattoos are a part of your body, and nobody owns your body but you.