It's easy to let the the absolutely mouth-watering selection of food and drinks on campus at incredibly reasonable prices deter us from ever leaving. But shockingly enough, there are actually plenty of better options off campus. Rochester has some amazing cafes that offer an escape from RIT dining  — even if you have to work while doing so. 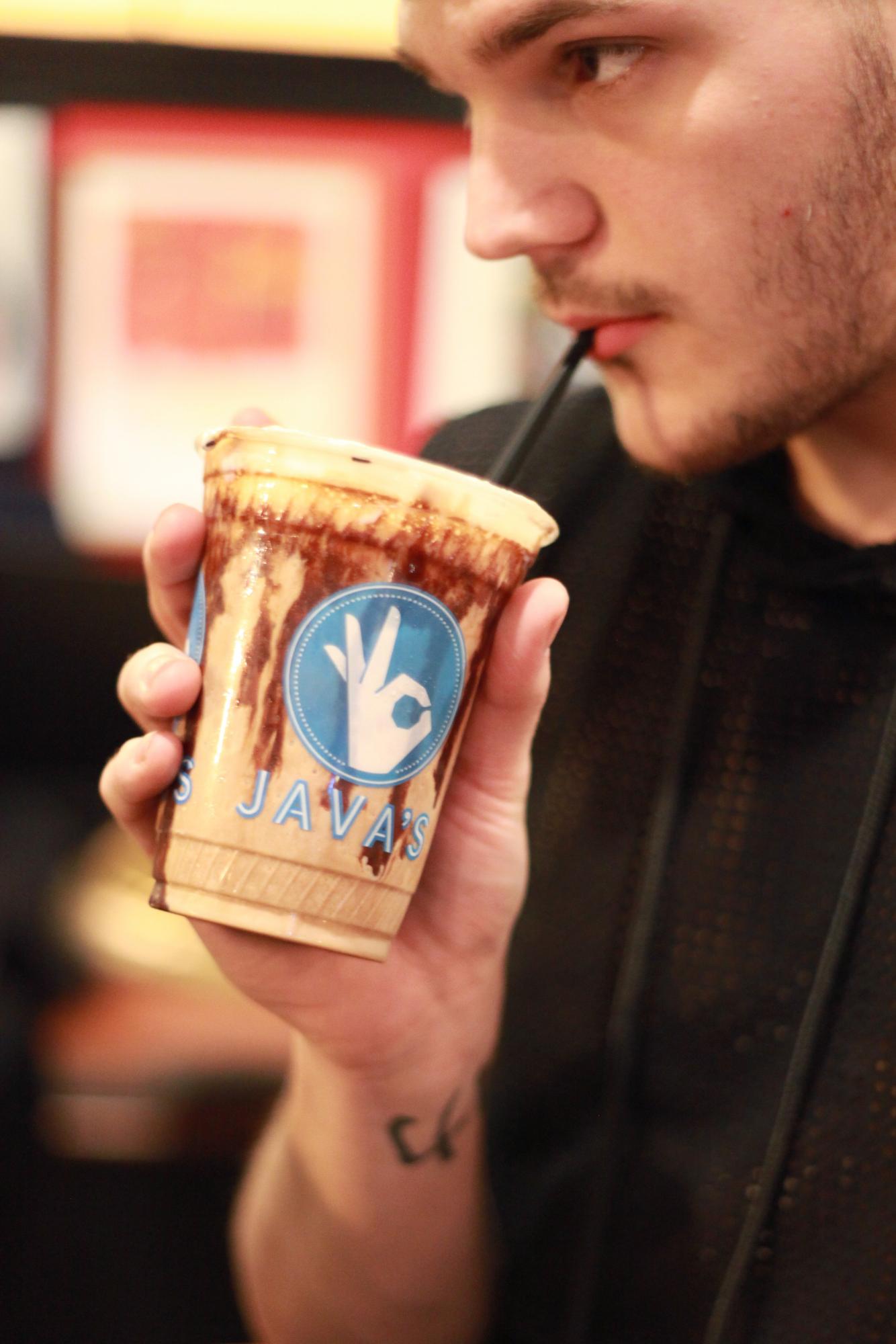 If you’re as emotionally attached to the on-campus Java’s as I am, then you’ll feel just as at-home in the Java’s on Gibbs Street. While you may have to walk a couple of blocks to avoid the metered street parking, covering that ground will be worth the grounds at Java’s.

Those familiar with Java’s know it has a very hippy-dippy style — with a rustic and eclectic mash of decorations, you’ll never run out of things to stare at as you ignore the assignment you are supposed to be doing.

This Java’s seems to be more of a hangout spot than the one on campus, so expect louder people. There’s plenty of seating, but outlets can be sparse. The tables are also pretty small, making it difficult to fit a laptop as well as your double-extra-super-espresso-tiger-surprise and cookie.

Their coffee and tea selections are reasonably priced and they offer rotating local roasts. If you’re not into coffee or tea, they also have specialty juices and smoothies. Baked goods and sandwiches are also available, though those are a bit pricey. 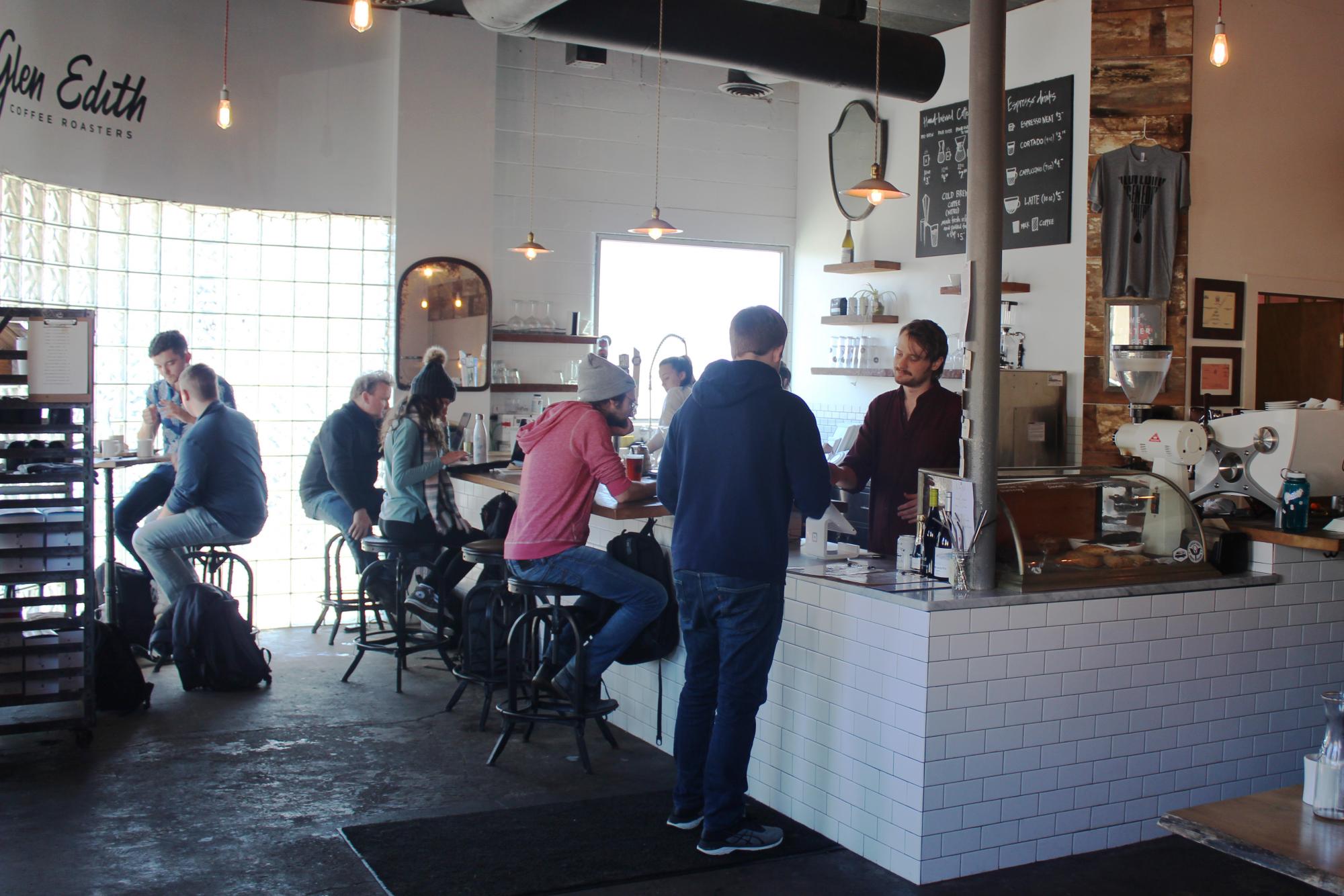 Finding parking near Glen Edith can be a latte take on, espresso-ly since the parking lot has about five spaces. Finding a seat can be just as much of an adventure; I’ve had to outright leave and go somewhere else in the past because there just wasn’t anywhere to sit.

Once you do find a table, though, there’s plenty of room to work and eat. There are also many outlets available — well, except for the tables in the middle of the room.

Glen Edith is much more industrial and minimal than the other cafes I went to. Its simple atmosphere is a great working environment. Many more people here were working rather than hanging out, so it was definitely way quieter than Java’s.

The pastries and drinks here are a bit more expensive than most of the other cafes I went to, though I honestly didn’t notice much of a quality difference. Their sandwiches are very flavorful; but, for the price, I wish they were larger or came with a side.

They do, however, have wine and beer, as well as a variety of cold brew options if that’s what you’re looking for. 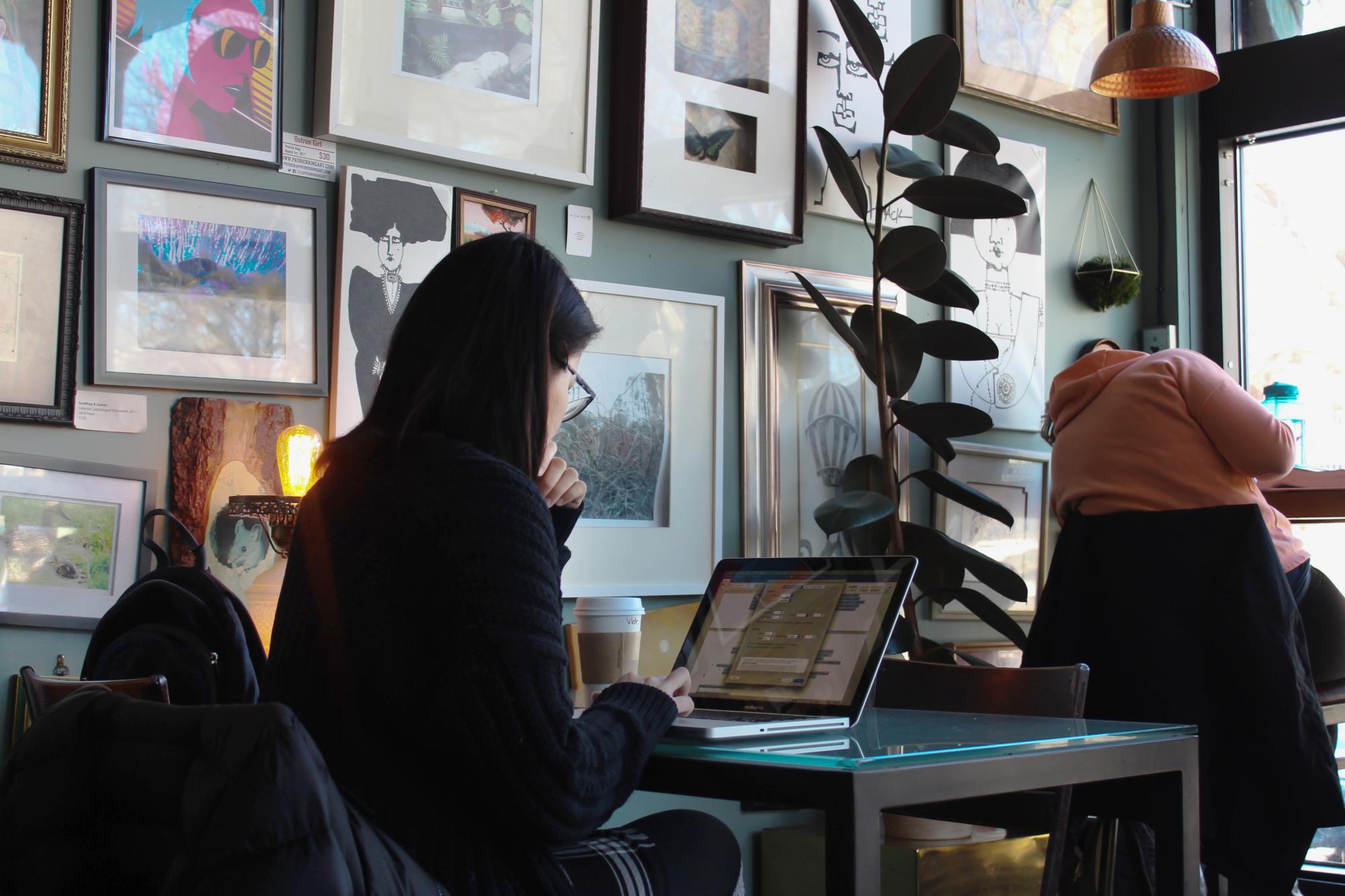 Located directly next to Glen Edith, Cafe Sasso is a nice blend of what you get both at Glen Edith and at Java’s. While it’s usually busy, it’s generally easier to find seating here. Parking, however, is the same struggle as it is with Glen Edith.

Many of the tables are small, and a lot of the seating is at counters rather than tables. Regardless, there is usually enough space to work and eat simultaneously. Also, you will pretty much always have access to outlets, which is a perk.

The atmosphere is artsy and funky; the walls are covered with local art that you can enjoy while sitting on their mismatched furniture. The vibe is just right for a chat with an old friend or typing away at that paper that’s due in 10 minutes.

"The vibe is just right for a chat with an old friend or typing away at that paper that’s due in 10 minutes."

They have a great selection of coffee and tea, as well as unique cocktails and specialty coffee drinks. Their prices are also some of the cheapest I’ve seen — yay to spending less money! 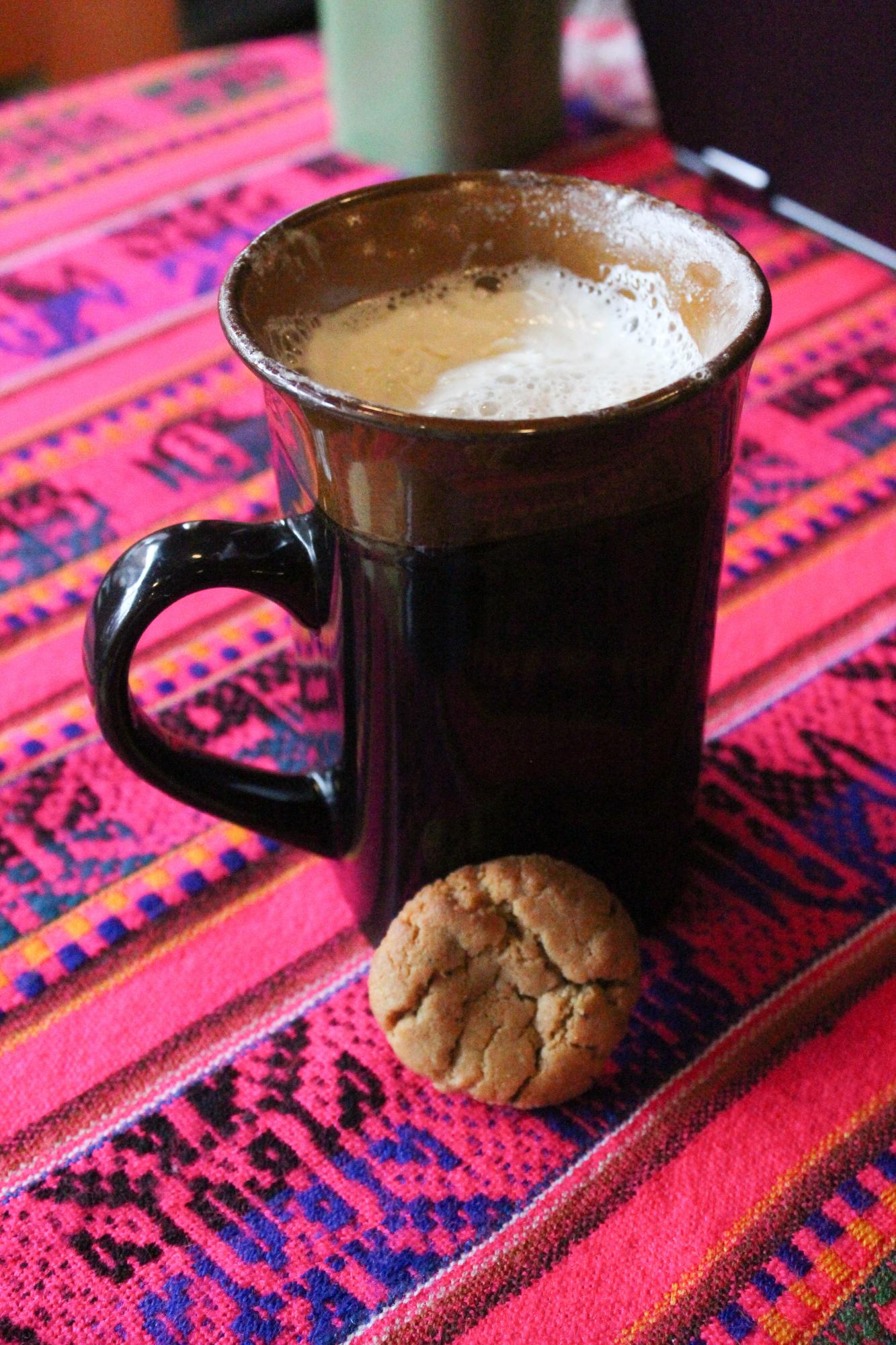 If you like coffee and good causes, then Coffee Connection should top your cafe bucket list. Coffee Connection is a non-profit business that helps train and create jobs for women recovering from addiction. Their main goal is to prepare them for sustainable employment. Who would have thought that drinking too much coffee could help people?

There’s plenty of street parking nearby and, upon entering, you’ll be greeted with a small shop that gives you the feeling of having coffee at someone’s quirky house. They also have a small photo gallery in the back that really communicates the story of their mission and impact.

In terms of space, most of the tables are small, making it difficult to fit anything more than a laptop. Another downside is that outlets are mostly concentrated in one area. However, it is very quiet, so it's a great place to do work if you’re easily distracted by noise.

Aside from the standard a-latte-ment of baked goods, including free cookies, they also sell soups and quiche. Additionally, their coffee and tea selection is good quality and their prices are comparable to most of the other cafes. Their smoothies and flavored lattes are items you should absolutely make a point to explore. 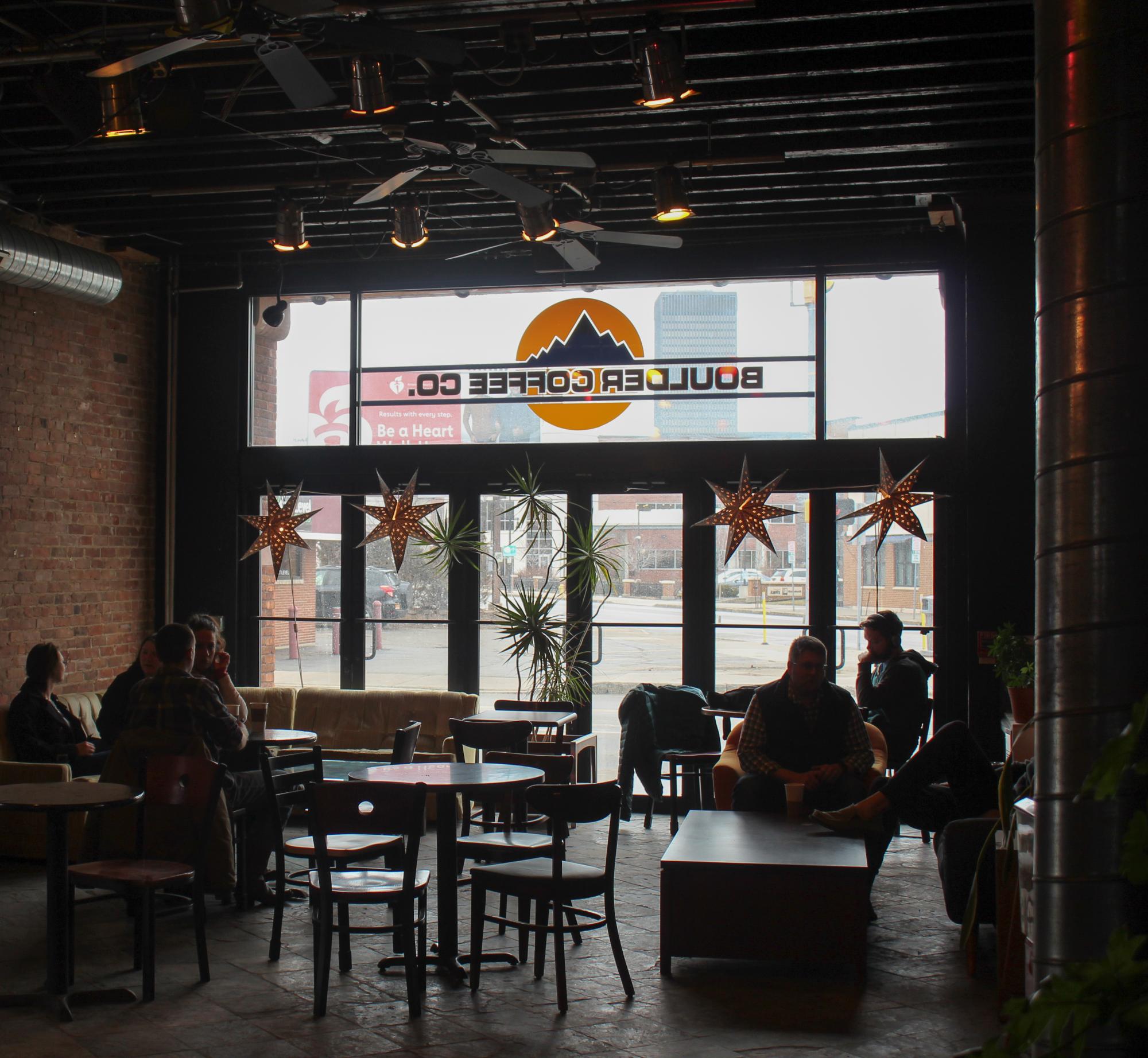 Next time a storm is brewing, plan a trip to Boulder Coffee Co.

You could easily spend an entire day at Boulder. Your car can, too, since they actually have a full-size parking lot.

Boulder is very spacious, and the seating is spread out enough so that even when it’s busy, it doesn’t feel cramped. The multiple rooms inside include a variety of retro televisions, bold art and a small stage for live music on Friday nights.

When they aren't playing music, there is generally an equal mix of people working and chatting — so the cafe doesn’t get too loud.

Their menu includes cheap but delicious coffee and tea, though they're slightly more expensive than Cafe Sasso. They have a less diverse selection of specialty drinks, but they make up for that with cocktails, wine, beer, baked goods, soups and sandwiches. Their sandwiches are especially flavorful, and the portions are very generous. 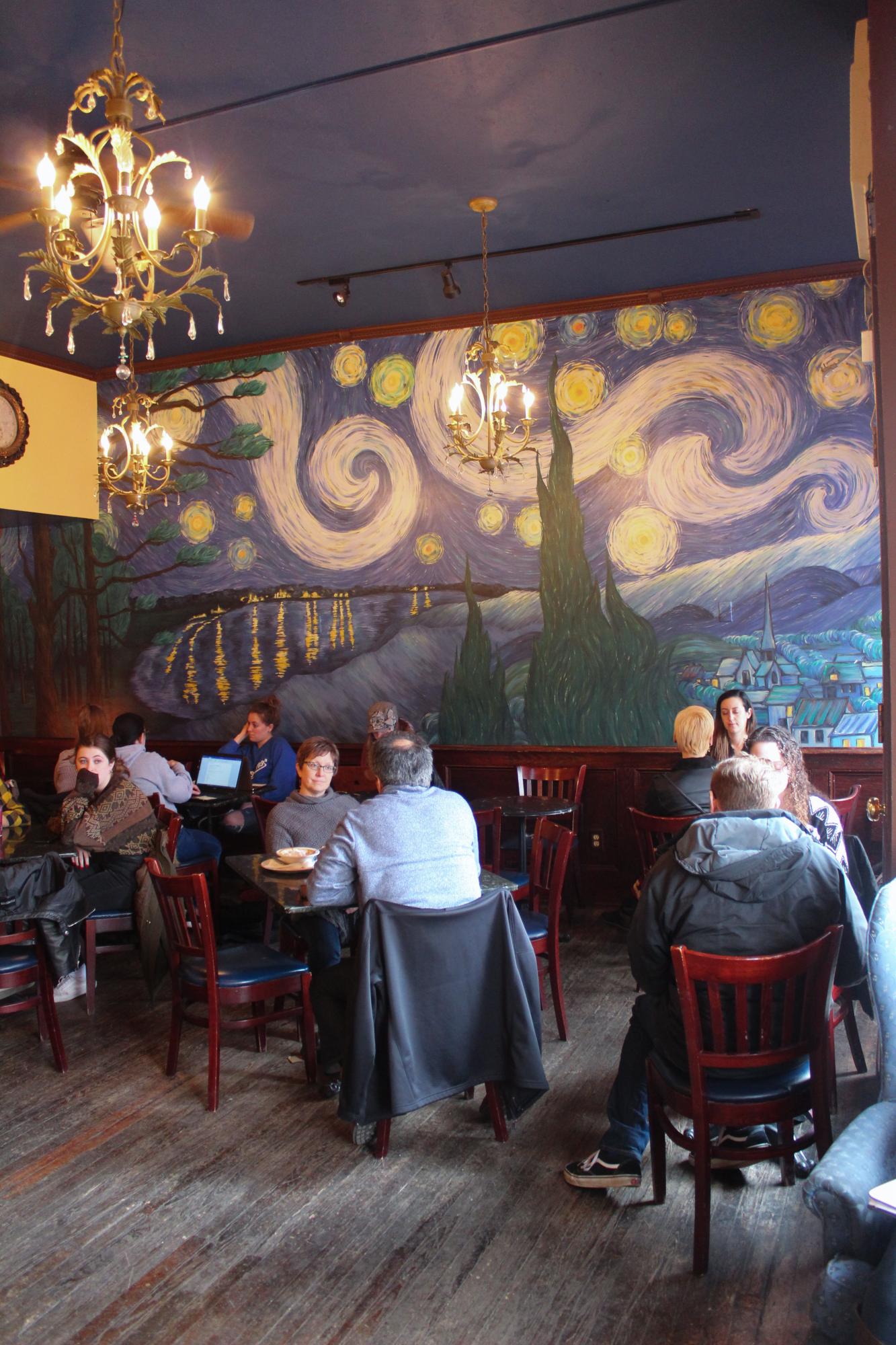 Starry Nites is a cozy cafe featuring an entire wall covered by a giant painting of Vincent Van Gogh’s “The Starry Night.” Before you can admire that though, you'll have to find street parking, but that shouldn't be much of a problem.

The cafe is small and chill, with simple decor that features rotating local art and a large bookcase of board games. The tables and seating areas are mostly big enough to eat and work at the same time, and outlets are accessible from most seats. However, the overall space feels a little cramped, especially when it’s busy.

The ambient music isn’t too loud, but the buzzing conversation can make it difficult to ground yourself in work. They also have regular live performances during which musicians play right next to the tables rather than on the stage, creating a much more intimate musical experience.

Their menu offers a variety of sandwich, soup and salad options that are good, but not the most flavorful. Their coffees and teas are great, the prices are reasonable and they also have a full menu of beer, wine and delicious specialty lattes. Once you’ve managed to decide on a beverage, be sure to choose your tip jar wisely. I put money in the jar that said the moon landing was real, and watched as the two guys at the counter started arguing over conspiracy theories.

“Why drink what everyone else drinks? Be different, man.”