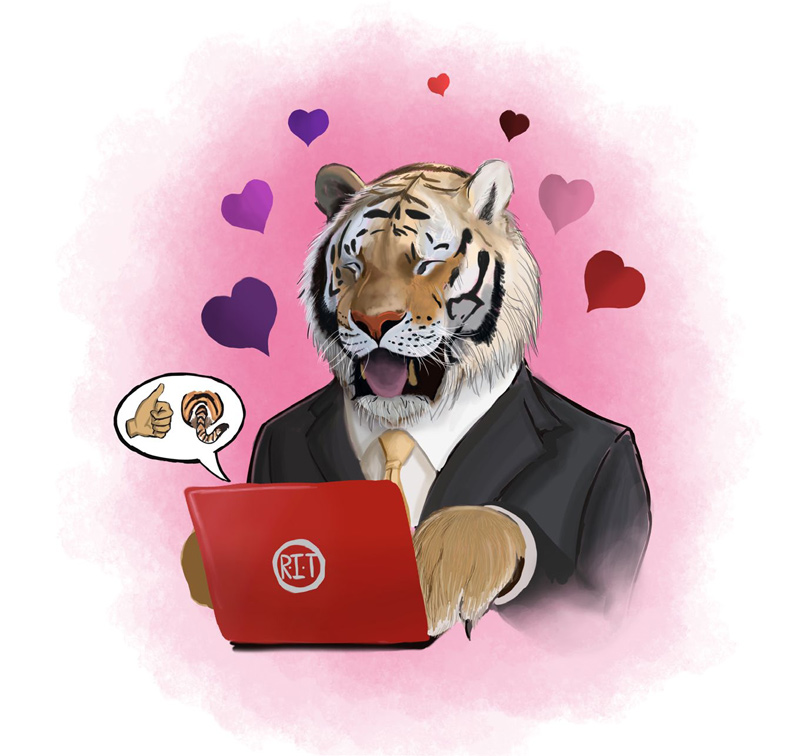 Recently, the RIT community has seen an exponential growth in anonymous pages dedicated to complimenting, admiring and laughing with (or in some cases at) fellow students. Each has its own focus and each has pros and cons both for the readers and those who run the pages.

Where It All Started

RIT Compliments was among the first anonymous pages to garner attention at RIT, followed by RIT Confessions, Overheard at RIT and RIT Crushes as some of the more popular. Lesser known pages have also followed in the wake of the trend, including RIT Missed Connections, RIT Shoes, You Know You Go to RIT When… and RIT Rage.

To date, RIT Confessions is the most popular of these pages with over 4,000 likes. The page was inspired by the University of California Santa Barbara’s Confessions page, which currently has over 10,000 likes. RIT’s other pages have similar origins, with RIT Crushes stemming from an initiative by Queen’s University.

Hamilton College, a small liberal arts school located in central New York, was one of the first colleges to adopt the idea of these anonymous Facebook pages. In speaking with one of the two co-administrators of the page, who wished to remain anonymous, she described how people with no association to Hamilton will message her complimenting their Compliments page and saying how it has helped their impression of the college.

These and other pages have become prominent in many college and even high school communities. And with a large and creative enough population, there is near endless material to work with.

In an interview in which the RIT Confessions administrator chose to remain anonymous, he elaborated on these rules: “The definition of a confession is it’s something about you, and something that you feel embarrassed or guilty about, not ‘oh I donated 300 dollars anonymously.’”

Another constant problem is intelligibility. Many submissions are received that cannot be understood, though the administrator has said that he will make minor corrections if the content itself is worth it. “If it’s bad I can correct it. But I do get a lot that I can’t read. They’re legitimately not legible even in electronic form.”

As for the content of the posts, the administrator recognizes that people are generally more intrigued by funny posts than sad ones. However, he has also noted that they don’t post the confessions that are “depressing” as often, “Not that they aren’t valid — some are funny, but they always bring it back to ‘because of RIT.’”

While some might say that these rules are keeping many funny posts from being put on the page, the administrator recognizes the problems that could arise from simply allowing everything to get through. “[If I were to accept all posts], in that case I’d simply automate it. But once people realized that was what was happening they’d lose interest or really start messing with it.”

There is no question as to whether these anonymous pages are successful. Many students, as well as alumni, have found the pages enjoyable, and as the administrator said, “it’s nothing more than entertainment.” Hamilton’s administrator has gotten a more positive idea of her campus from running the site as well. “I’ve found there are so many people I don’t know but have gotten impressions of from compliments and it makes me excited to meet and reach out to more people on campus.”

The RIT Confessions administrator has gotten a lot of enjoyment out of running the page too, citing his favorite part as “the satisfaction that I get to let other people enjoy it, or whatever [they] get out of it. It’s like a giving thing, not power… I’m just that invisible god hand hitting submit.” However, his second favorite part is seeing the messages from the people who don’t read the information on how to submit their confessions. He laughed, “It’s fun to message them back. I’ve gotten a few that ask, ‘so how is this anonymous, you can see my name.’”

When asked about why she believes these anonymous pages are so popular, the Hamilton Compliments administrator cited the difficulty of complimenting someone face to face. The administrator of RIT Confessions pointed to both the anonymity and the immediate response possible when posting to the pages. “People get to see what other’s reactions are, like ‘Oh you’re not an awful person’ or ‘oh eff that guy’ or ‘Hey if you need a friend,’ that makes someone feel great. Whether you post good or bad you get to see what people think.”

For many, these pages can be a fun way to express themselves and their thoughts to the RIT community at large, and to see who is like-minded or feels similarly. These pages, each in their own unique way, bring the community together.