People Who Stand Out

You’ve got to admit, people at RIT stand out. And even within our ranks, there are people who are well known for anything from their unicycle to their daily donning of a My Little Pony hat.

We interviewed some of the people on campus who caught our eye for similar reasons to find out more about their motivation and style. Whether they stand out because of their uncommon hobby, their mode of transportation or their desire to dance, these people have the confidence to do something different from the rest. 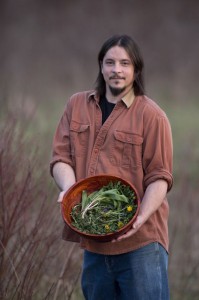 “I didn’t have a car at that point. I wanted to eat a salad and the grocery store was like miles away and then the woods are right next to me,” says fourth year Industrial Design major John Zakrzewski. Instead of buying salad that day, Zakrzewski went into the woods by his apartment and found ingredients there instead. “It’s free and better for you” says Zakrzewski.

Zakrzewski started scavenging when he was twelve but recently started searching for pure, natural food more regularly. “I go mushroom hunting a lot, fishing, a little bit of hunting,” says Zakrzewski. “I’m kind of interested in being able to survive in the wilderness.”

For the moment, Zakrzewski doesn’t scavenge enough food from the woods alone but can enjoy a free salad about once a week. He predicts that as the weather gets better, he will be able to find more edible food.

Despite scavenging more often than most, Zakrzewski still believes that he has more to learn. “I know enough to be able to pick berries and know which mushrooms are good and how to make a salad but I’m still passing by a lot of good edible stuff.”

He started learning more about scavenging during his time in the Boy Scouts, but also gained some practice while mushroom hunting on family trips to Poland and from books on the topic. However, he cautions that illustrations and pictures of the plants are not always clear enough. “Certain plants, they will stick out like a sore thumb and you can recognize them but other plants, they are kind of iffy if they are young.”

His suggestion: “I would definitely go out with a guide, someone who knows.” Zakrzewski hopes to explore the woods with an expert so he can find more of the foods nature has to offer him as well.

“I think it’s kind of ridiculous that people go to school for so many years and learn all sorts of stuff but as soon as you put them in the woods or in a field, they’ll starve to death but be completely surrounded by food,” says Zakrzewski. “I think it’s important to know.” 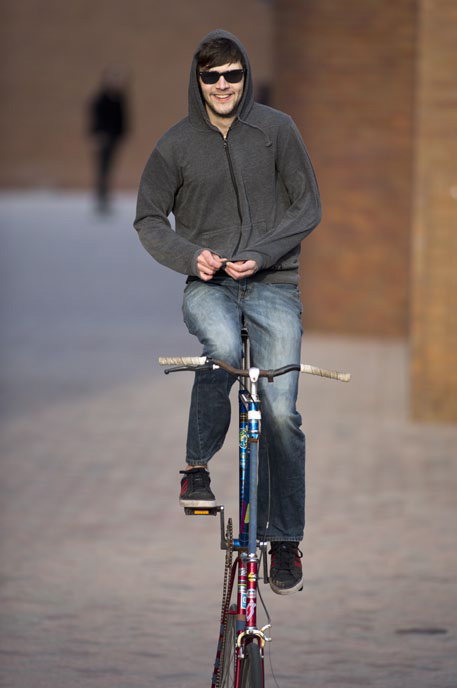 As the skies clear and the campus quads become a bit more crowded, RIT students start to see the university in full spring. Yet flying kites riding the breeze, bandana-wearing zombies and sunbathing studiers are not the only things worth noticing on the quarter mile. You might just find a certain double-decker bike catching your eye and its owner, maker and rider — fourth year Industrial Design major Dave Buchanan — doesn’t mind.

“It does get a lot of attention. The girls seem to love it, for some reason. I get a lot of ‘I Love You’s and ‘Will you marry me?’” says Buchanan.

Made out of two stacked bike frames welded together, the monumental, dualistic bike started out as a fun project between Buchanan and his roommate and has since escalated to become a unique form of transportation. People wonder how he gets on and off his bike and whether it’s possible to stop. But, according to him, it’s fairly easy to ride with getting on top being the biggest challenge.

After that, Buchanan says it isn’t hard to ride at all; it’s like any other bicycle. The main difference is the responses he receives when riding.

“When I’m on my bike I get a lot of compliments. I get some hate too sometimes,” says Buchanan. “Today I was riding to class and somebody called me a damn hipster and I just had to laugh out loud. Any response is a good response, I guess.”

Despite mixed reviews, Buchanan seems confident in his creation and is looking to the future of stacked bikes. Even now, he is busy working on a second. For the moment, however, his two story bike is just a way to get to class.

Buchanan, scheduled to graduate this year, says that he will continue to ride his bike until then. “There’s no reason to stop,” says Buchanan. And fans of his double-decker may find no good reason either. 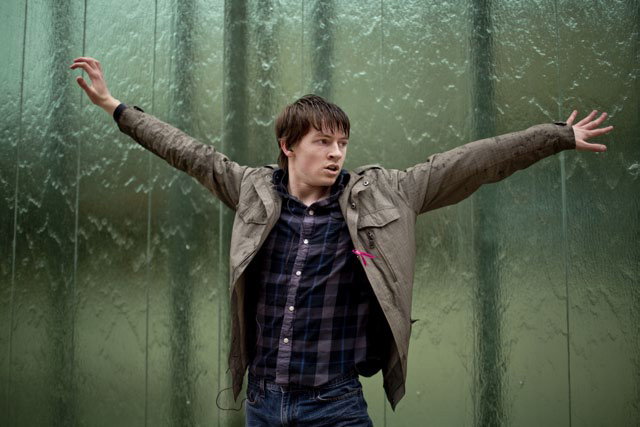 “I don’t always dance between classes but generally speaking I often feel inclined to,” says first year Computer Science major Ben Walton. Despite describing himself as shy, Walton is pretty well known around campus for his modern improvisational dancing to and from class on the Quarter Mile.

“I think at the beginning of the year, I was looking for opportunities to dance here at RIT because I did not want to lose that aspect of my life,” says Walton. “So I kind of just found that I could dance on my own on campus and in that way I would never have less dance then I wanted to.”

Walton first discovered his passion for dance in middle school and attended all of the social dances he could. He believes that his experiences at those dances contributed to his confidence in dancing today. “When I first learned that I could dance, it was in front of other people so that probably has something to do with it.”

Once he reached high school, Walton began taking modern dance classes, which has been his favorite dance style ever since. “I definitely feel that my dance style is rooted there.”

Since coming to RIT, his dancing has inspired some of the posts on RIT’s anonymous Facebook pages including RIT Crushes. “I have changed people’s outlooks on how weird it really is,” says Walton. “I’ve come to accept that some people might think it’s weird but whatever. And other people are actually really interested in it and because of that, I have an obligation to continue.”

Since he started dancing at RIT, Walton reports seeing other people dancing on the Quarter Mile as well which he finds to be pretty cool. And that’s part of the goal. “I think that part of my job is to surprise them with who I am,” says Walton. “And then that might affect their day – hopefully positively – or their outlook on what people can do.”